Michael Triviño, a businessman and urban farmer from Quezon Province.

QUEZON – Michael Triviño, a businessman and urban farmer, decided to turn his vacant lot into a backyard farm and named it Myrtle Sharrin’s Garden after his daughter.

Despite having no work during the community quarantine, Triviño was kept occupied, not because of his trucking business, but because he was cultivating crops. He discovered his interest in urban farming upon watching gardening-related vlogs and joining groups online.

Michael Triviño, a businessman-farmer, 43, posed with his harvested mango fruits.

He went to the supermarket, bought seeds, sowed the seeds in plastic bottles, and placed them in his then idle backyard. Instead of buying pots, he opted to upcycle old bottles, tires, and crates. “Since I owned the lot, I’m the one who designed and decided what and where to plant the seeds. For me, it’s my little project,” said the urban farmer. To maximize the space further, Triviño attached his bottle planters to the property wall. He also created racks out of bamboo where he laid other bottles.

Take a look at his 240 square meter backyard farm, which Triviño and his helpers built in 30 days.

From a cluttered storage area, their backyard is now a thriving urban farm. He started the project last April with the help of his drivers and helpers from his trucking business. Since his employees had no scheduled trips, Triviño thought of a way to retain their income through his farm project. “Sila na lang naging katulong ko para at least diretso ang kita nila. Mga kawayan na ginamit ko ay sa kanila ko din kinuha para lahat kumikita. May mga tanim yung mga driver ko na kawayan sa bukid nila, tutal malapit lang naman kaya kinuha ko na. (They became my help [in building the farm] so at least, they can get their income directly. The bamboo I used is from them too, so everyone is making money. Some of my drivers have bamboo trees on their farms nearby so I bought them.)”

Triviño with his employees sharing a meal in the garden.

Triviño mainly cultivates loose leaf lettuce, but he also grows eggplant, okra, labanos, pechay, mustasa, sili, ube, and herbal plants. His initial plan was only to plant lettuce in his PET bottles, but it turned out that he had bought so much seeds to the point that he ran out of bottles, so he used other materials like tires and crates. “I love lettuce, that’s why I intended to grow them in my PET bottles. Since I got overjoyed in buying seeds, I ended up putting my labanos and kangkong seeds on the used tires. The first few seeds went great and successfully grew until now that I was able to plant all the seeds that I bought.” He also grows lettuce in his self-made hydroponic system. 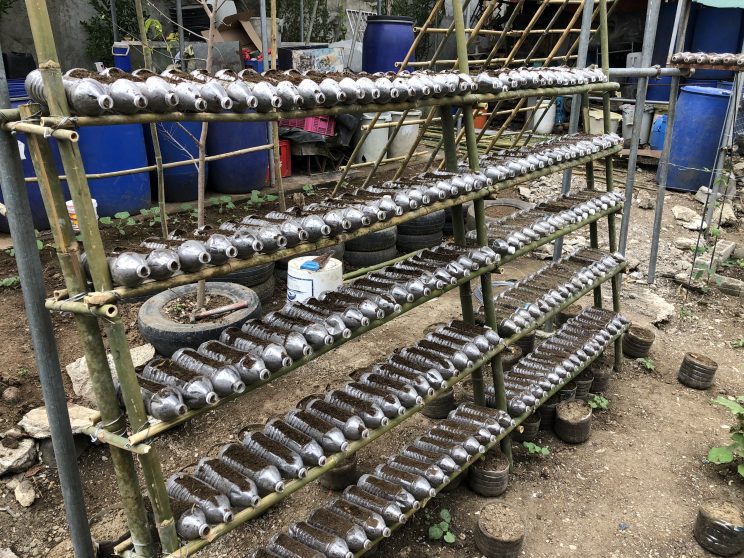 He upcycled more than 1000 bottles as planters in his backyard garden.

For eggplants, strings, and okra, he gets to harvest twice a week, while for lettuce, he harvests them weekly. Every day, he waters the plants around six in the morning and checks them for any presence of insects. He also removes weeds and dry leaves daily. 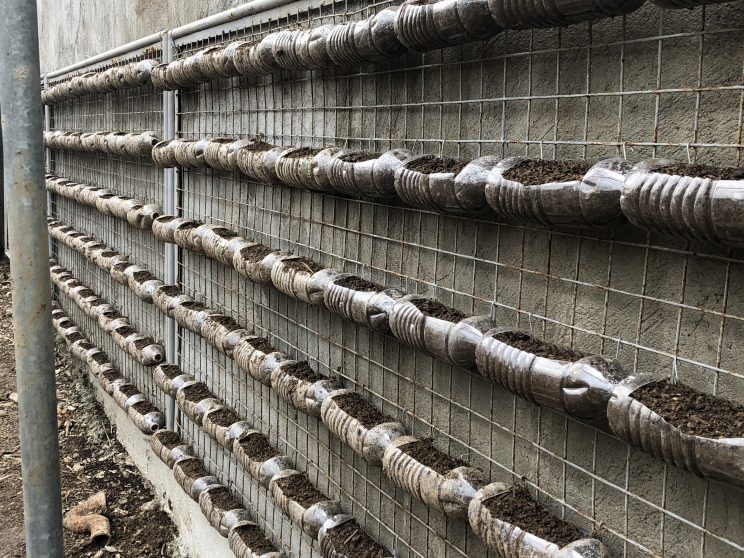 To be able to sow the seeds that he bought within the available space, he practiced vertical farming.

With the use of the internet, he learns everything from planting tips to making his natural homemade fertilizers and pesticides. He also attends webinars related to gardening or farming.

He expresses his joy in this newly-discovered passion. “During those times [of gardening], I feel happy, especially when I see that there’s an improvement with what I am working on. It’s my way of releasing stress too,” said Triviño. 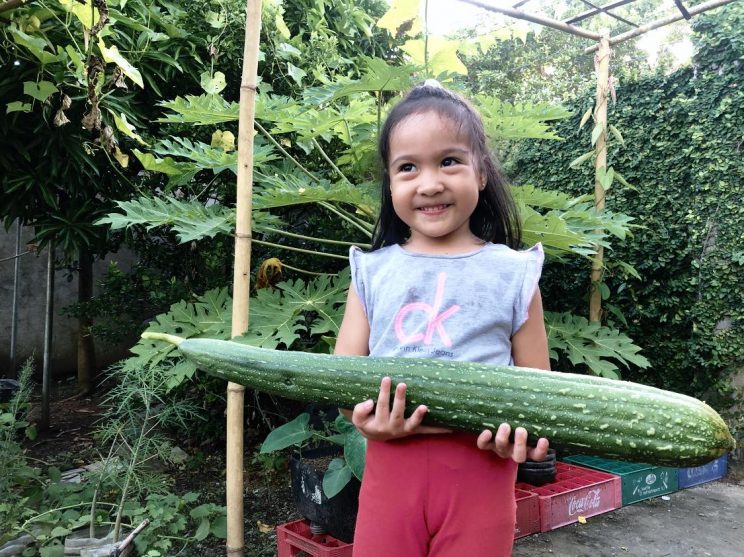 His daughter Myrtle Sharrin, who the farm is named after, holding a harvested patola.

Every month, their family gets to save around P3000 to P4000 in food expenses. As of now, the produce goes to their meals only. They also share some with their friends, employees, and neighbors. Triviño aims to sell their produce by September and plans on expanding his urban farm by using his other vacant lot located in their subdivision.

As many people lose jobs and find purpose due to the current situation, this businessman found passion in producing food not only for his family, but for his neighbors, friends, and employees as well.

Recently, Triviño also won in the AgriKwento Contest by ATI CALABARZON. Check out his video:

Six things you need before starting a farm business