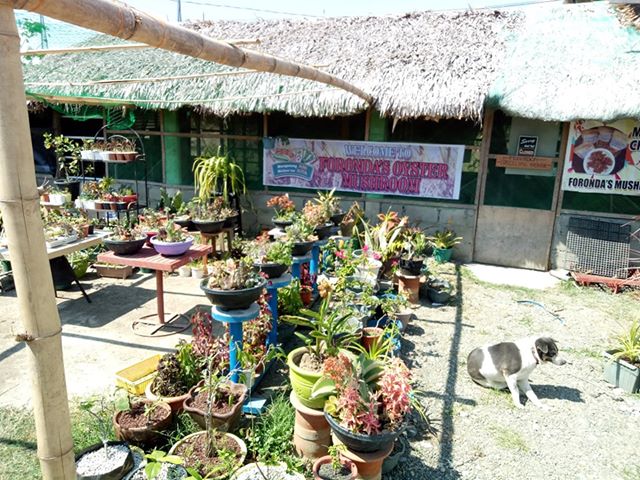 Martin Luther King Jr., an American minister, once said “Age is just a number. It carries no weight. The real weight is in impacts. The truth is that you can do it at any age. Get up and be willing to leave a mark.”

Reygan Foronda, 30, from Cabagan, Isabela is an example of how age isn’t a defining factor in success.

Foronda first engaged in mushroom production as a student and is presently reaping the fruits of his hard work as he was recognized as a Young Entrepreneur by the Department of Agriculture’s Regional Field Office 2. 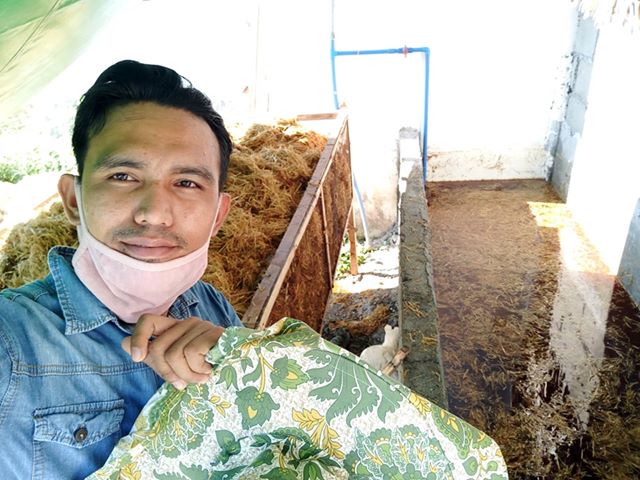 Reygan Foronda was recognized by the DA as a Young Entrepreneur for his early work in mushroom production.

“The recognition opened great opportunities for me to develop my business on mushroom production,” Foronda said.

At present, Foronda is the proprietor of Cassia Food Products and Foronda’s Mushroom Farm. He is also the president of the Cagayan Valley Mushroom Entrepreneurs Association (CVMEA).

Going into mushroom production to support his studies

Foronda’s decision to start growing mushrooms stemmed from his dedication to support himself through college. At the time, he was 26-years-old and was on his second year.

“I started when I was in second-year college because I thought that I should start a business that could pay my expenses and help me finish school,” he said.

With a capital of P3,000, he created mushroom fruiting bags, using rice straw (a by-product of rice) as a substrate or growing medium.

According to Foronda, he opted to use straw because it seemed like a waste to see farmers burning the material after harvesting.

“They weren’t aware that rice straw can be used to grow mushrooms. And this way, I get to include farmers in my [then] small business because I purchase the by-product from them which then gives them an additional income from what they first considered as agricultural waste,” he said. 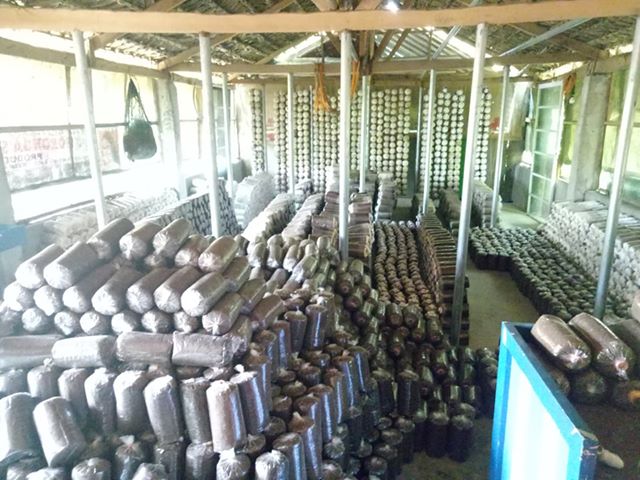 Mushroom fruiting bags with rice straw as a substrate.

Foronda managed to start his mushroom production venture with 500 fruiting bags from the rice straw that he purchased from farmers. He then waited five months to complete the mushroom growing cycle before he sold his produce to the market.

In one month, he earned P13,000 from the mushrooms that he grew.

Presently, he has 10,000 mushroom fruiting bags in his growing house and produces white and grey oyster mushrooms since these are the varieties that the market demands. 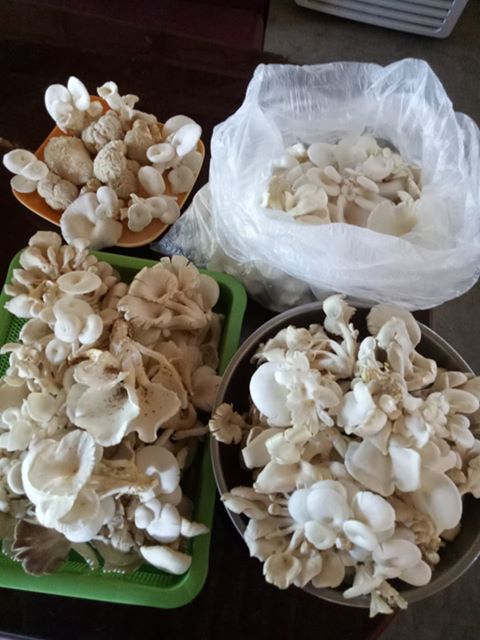 To ensure the success of his mushroom production venture, Foronda attended training sessions at the Department of Agriculture and applied what he learned to his mushrooms.

Seeing how profitable mushroom production is, Foronda pursued what he started and through his efforts, he attained a bachelor’s degree in agriculture at Isabela State University.

“I’m very proud of the course I took because I earn a good profit through honest and hard work. Plus, I get to help my fellow farmers,” he said.

Foronda has also been invited as a key speaker as well as a trainer by the DA regarding mushroom production. He hopes that he can inspire others to start growing mushrooms as he did because of the money-making potential it has.

During his early years as a mushroom grower, Foronda attended training at the DA. Not only did he learn how to properly grow and manage his mushrooms, he also learned how to increase his income through value-adding.

“The free training gave me knowledge on how to process fresh mushrooms into different food. One of these is the famous healthy snack: crispy mushroom,” Foronda said.

Branding his mushroom products after his farm, Foronda made use of social networking sites to market his merchandise. His friends even helped out in advertising his crispy mushrooms. 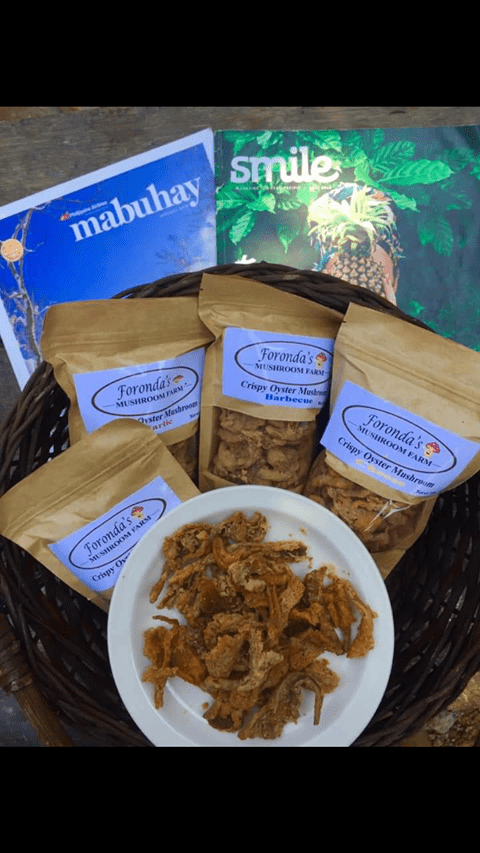 Eventually, Foronoda’s products gained the attention of many and are now being sold in local pasalubong centers and even in other countries such as Canada, Saudi Arabia, Hong Kong, Dubai, and more.

“One reason why people enjoy my crispy mushroom is because of its quality. I make sure that the ingredients are fresh and the mushrooms are cooked just right to achieve the crispiness that the people like,” he said.

A learning experience in business

Although Foronda has been successful in selling his mushroom products, he isn’t exempted from encountering some challenges every now and then.

He shared that he has been victim to some scammers who have placed orders for his merchandise but have yet to pay or receive the orders. Foronda admitted that being scammed has brought his spirits down.

Luckily, he didn’t let it affect him too much which is why he continued to pursue his business.

“I turned this unfortunate experience into a learning experience and an inspiration to keep following my dream of developing my mushroom production business. I realized that I should be steadfast especially in times of adversity,” Foronda said. 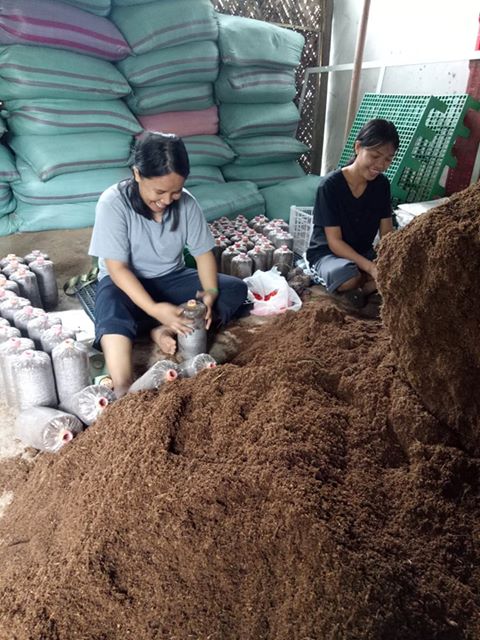 Some of the young farmers who help out in Foronda’s farm.

The Young Entrepreneur hopes that he can inspire the youth to make their dreams come true much like he did when he set up his mushroom business.

For more information, check out Rheygan’s Mushroom Products on Facebook.

Fisherfolk in C. Visayas turn to online selling of seafood products amid quarantine