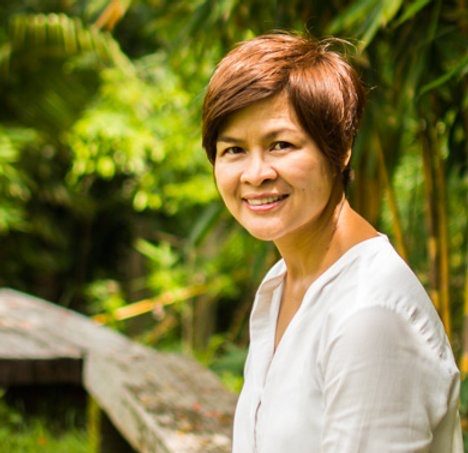 After a miscarriage, farming had been a therapeutic hobby for this weekend farmer.

You would think that individuals with stable and good career paths would only stick to their jobs and would still feel safe enough not to worry about the nation or their family’s food security. It might be true for someone else, but this is not the case for this professional.

A designer, artist, farmer, and mother 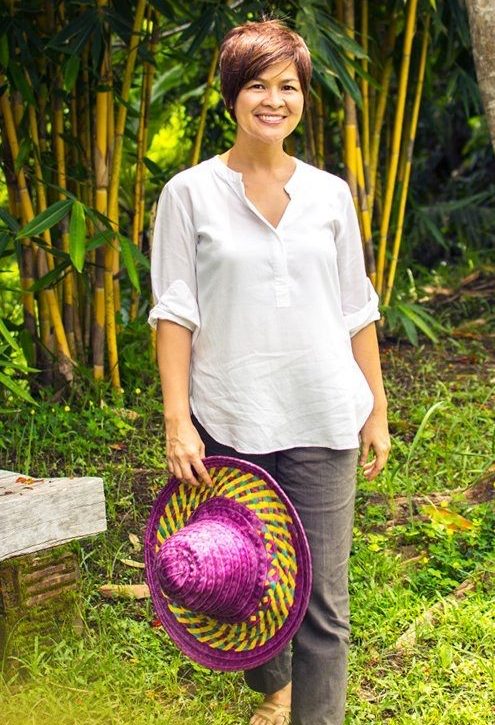 Pinky Peralta, co-owner and operator of The Weekend Farmer.

Pinky Peralta, an interior designer and a weekend farmer, discovered farming 14 years ago. And because she was lacking in knowledge, she had to learn it from scratch. One thing that led her into farming was her eagerness to connect with nature during a depressing season of her life. “I had practically zero knowledge and skills in agriculture. All I knew is that I had this desire to reconnect with the land. It was my way of knowing the essence of my existence as a beloved child of God.”

Apart from being a woman of many titles, Peralta is also a nurturing mother of two. In the same year that Weekend Farmer (TWF) was born, she also had a miscarriage. She used farming to heal internally and TWF came to be an outlet that helped her to recover from grief and loss.

Despite having no experience in growing any sort of food, this weekend farmer read books, attended training, and asked people with farming experiences. She says, “I set out to learn by attending a lot of training and workshops available to gear me towards this transition. I know for a fact that what I wanted is organic and natural farming, having read Fukuoka’s Last Straw Revolution book. So I set out to learn and learn the natural way.”

The Weekend Farmer is a 2.5-hectare agritourism farm situated in Alfonso, Cavite that houses perennial trees like Antipolo, coffee, bignay, madre de cacao (Gliricidia sepium), and jackfruit integrated with livestock, poultry, and beekeeping. Back in 2006, the Peraltas bought the land and envisioned the farm to be the source of their food. Today, they get to enjoy the farm and its produce that took more than 10 years in the making. 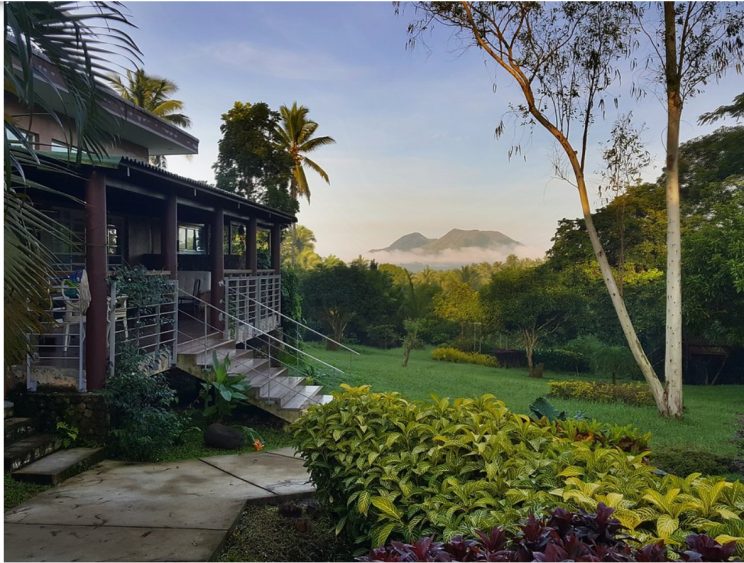 Sunset at TWF: More than an agritourism site, it is a place for meditation and relaxation away from the hustle and bustle of the city life.

Peralta’s inclination towards farming comes from her early years with her grandfather. She says, “As I think about it, subconsciously, I may have inherited this innate passion from my grandfather who, though he was into education, found time to cultivate a piece of land for his family.” Even though her passion for farming kindled when she already had a family, she believed that the patterns that she followed in agriculture are rooted in her childhood experiences. 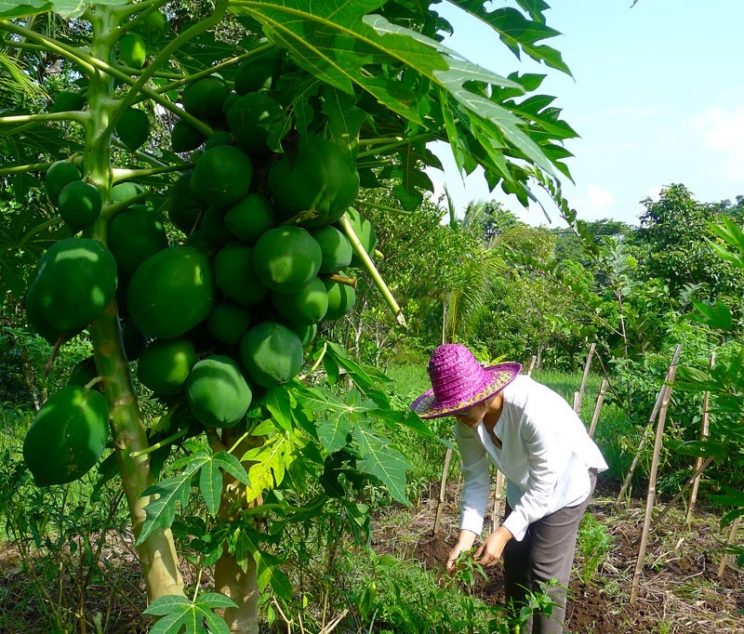 Being in the industry for years, one of the secrets to her success is faith. “When you are a farmer, you need to pray hard that God may bless the land, make the fruits yield in season, and no calamities to harm. I always lay my hands to the land and in each tree,” she said.

She also shares this passion with her husband who is a pastor dabbling in making craft beer. The farm is close to their hearts because this is their first and only farm. The Peraltas both have their day jobs aside from running the farm on weekends hence, the brand’s name “The Weekend Farmer”.

Apart from the reason that weekends are the only time to plant and grow their food, they also wanted to set an example and inspire others that even though you have a job, it is still possible to grow your food. This vision to promote food production not only for farmers, but also in every household is what paved the way for TWF to reach this far.

From a chemically-induced and unproductive cassava plantation when they first bought the land, it has evolved into a prolific natural farm that has been divided into four zones: the first area includes guesthouse for rent, gazebo for gathering, and a kitchen for cooking; second zone is where you’ll see the veggie patch and the bee house; the third would be the space for fruit-bearing trees, root crops, and livestock; and the last zone is where bananas, coconuts, and coffee plantations are found.

They began from cutting down the tall cogon grasses to gradually adding facilities on the farm until it has developed into a space for crop and animal production as well as for the structures set for guests. In 2016, TWF opened its doors to the public with their goal to share the same passion with other people towards self-sufficiency. They do this by offering activities and workshops to individuals with or without a background in agriculture. 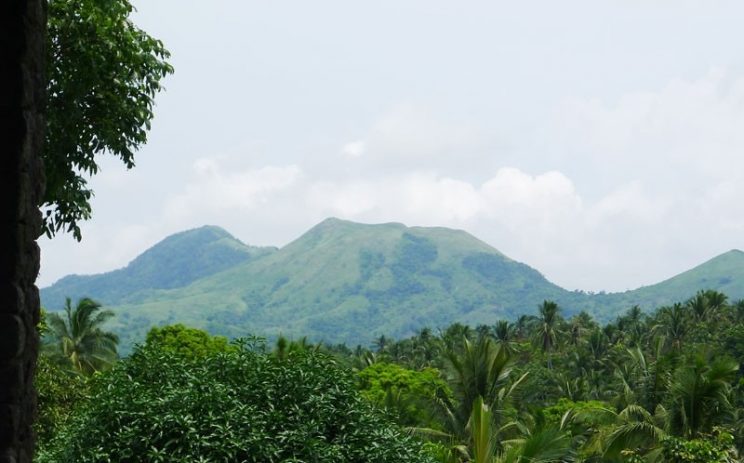 A beautiful sight of Mt. Talamitam from the farm.

In terms of crops, they have more than a hundred perennial trees and medicinal plants like serpentina, turmeric, peppers, lemongrass, oregano, tarragon, and cilantro. For the trees, they have about 30 to 50 coffee, 20 bignays, around 60 to 30 guyabanos, 12 to 20 coconuts, and many more. They also cultivate lettuce, chilies, sitaw, eggplant, okra, and other local vegetables that vary depending on the season. In growing them, Peralta ensures they practice natural farming methods such as vermicomposting. 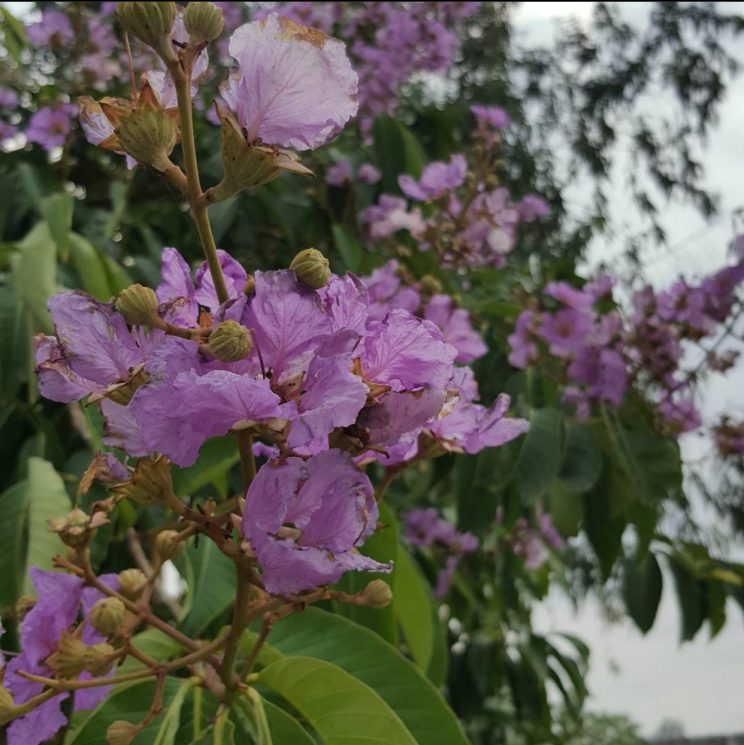 Aside from the medicinal purposes of banaba, its stunning flowers are also a plus.

Since the beginning, Peralta only has two farmhands in running and maintaining the farm: one farm manager and one cook. Every day, their routine is mainly watering and pruning. If there are guests, TWF has an on-call housekeeper as well. Aside from their wages, they can also get harvests from the farm for their personal consumption. Peralta shared that whoever from her team is in need, she is also very much open and willing to be with them every time.

Moreover, the farm also allows guests to pick their own veggies during harvest season, which is one of the many farm activities called pick and pay. The money they get from this goes to the maintenance of the farm.

TWF also offers accommodation, which can hold up to 35 persons per night in different types of housing. When the farm was still for private use, Peraltas always invited their friends at TWF and their peers’ experience on the farm sparked an idea of opening it to the public as well. Due to the increasing demand from them, they gave in and opened its doors last 2016 not only for monetary purposes, but more of promoting farm life to other families as well. 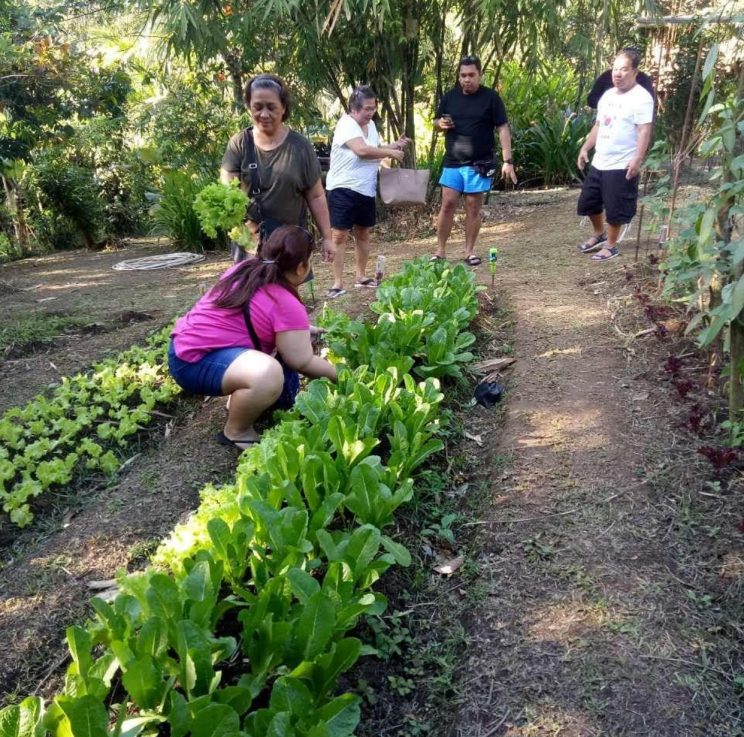 At TWF, you can be a weekend farmer together with your loved ones and get a chance to live your farming dreams by harvesting your own food.

You can book for a farm visit and room via Airbnb. TWF is considered a Superhost (a badge given to hosts with good service) on the app, where it got a lot of bookings because of good reviews. Otherwise, guests can also book through their website or Facebook account. They have various rooms: superior type, cabin style, and the Kubo style. They also host workshops, retreats, and celebrations for an intimate crowd.

In the future, Peraltas are aiming to build more amenities and services available on the farm that are geared towards contemplation, rest, and productivity within the farm premises. 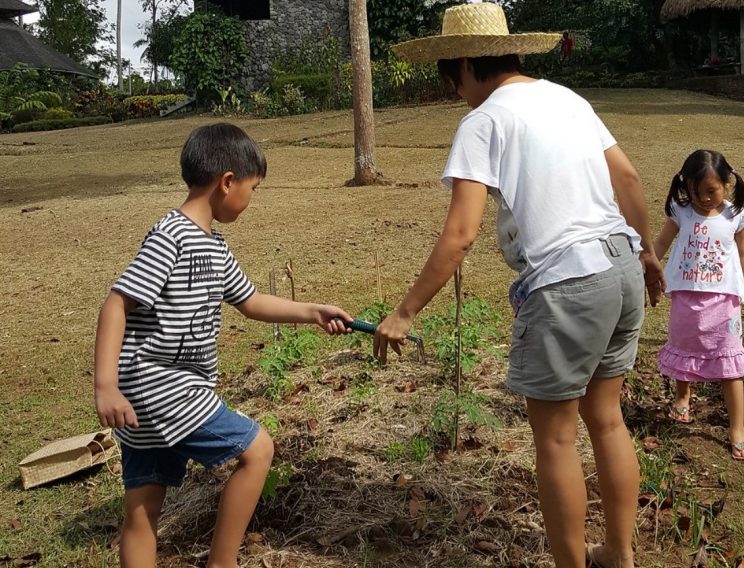 The Weekend Farmer is a family-friendly place where kids can enjoy playing and immersing in nature. And by family, it means even your pets are very much welcome.

As someone who initially had no skills and practice in farming, Peralta has struggled a lot. “I juggled my schedule as a professional interior designer and a struggling farmer. Although I was completely inexperienced in toiling the land, nature became very patient and taught me its ways.”

The progress may be slow, but this farmer remained undeterred by countless trials and errors with an ambition to provide food for her family. On top of immersing into farming-related books, she also applied the lessons by sowing seeds herself. “Yes, I made lots of mistakes in the process, but because nature was my teacher, I was rewarded with its patience and unconditional support. Ten years have passed and this weekend farmer has become the consummate farmer for all seasons,” she said.

When asked why she ventured into farming, her answer was, “People are multiplying, lands being converted to houses. People are bound to get hungry if I don’t become accountable now for myself and the next generation.” She said that the existing health crisis has also tested and shown the wealth of one’s family in terms of day-to-day sustenance. “It doesn’t have to be a big business right away. When you answer your own needs, the surplus will follow, and others will get inspired,” the farmer added.

A major challenge she has faced so far is the farm’s lean season that usually occurs during the rainy months of June and onwards. Calamities like the Taal volcano eruption and storms like typhoon Glenda are also big hurdles for the farm, especially when overhead expenses top their income.

Due to the community quarantine brought by COVID-19, Peralta’s farm is currently closed. They’re in the process of preparing their facilities as they re-open the farm this month in accordance with the protocols set by the authorities. 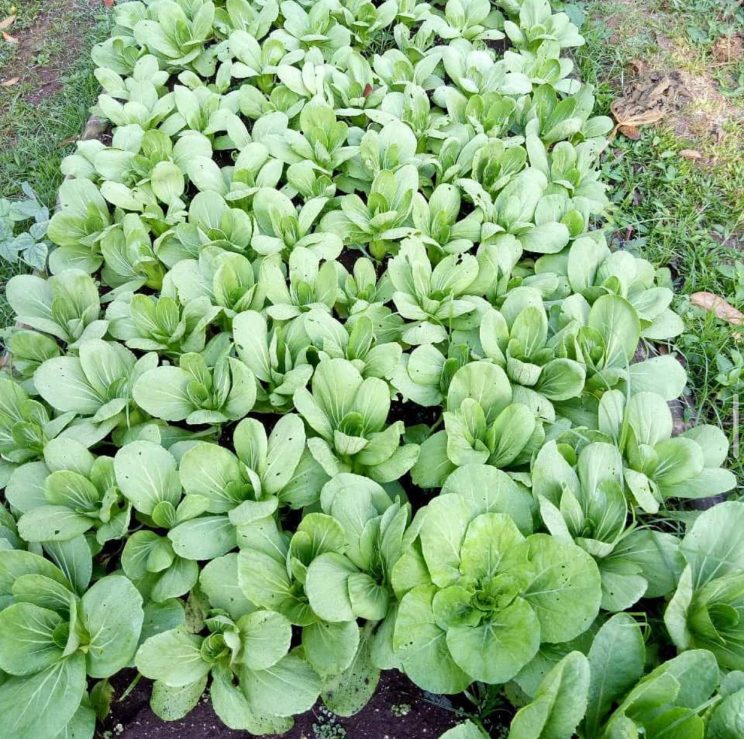 Naturally grown Bokchoys. During the enhanced community quarantine, some vegetables from The Weekend Farmer are handed to the front liners and community around the farm.

These days, Peralta also noticed the increasing numbers of inquiries coming in during the quarantine period. She added that this might be because people long to immerse themselves in nature and visit destinations like TWF after months of being quarantined.

Hopefully, after the crisis passes, the citizenry would choose to uplift fellow Filipinos by visiting and supporting local farms and farmers.

Photos from The Weekend Farmer.