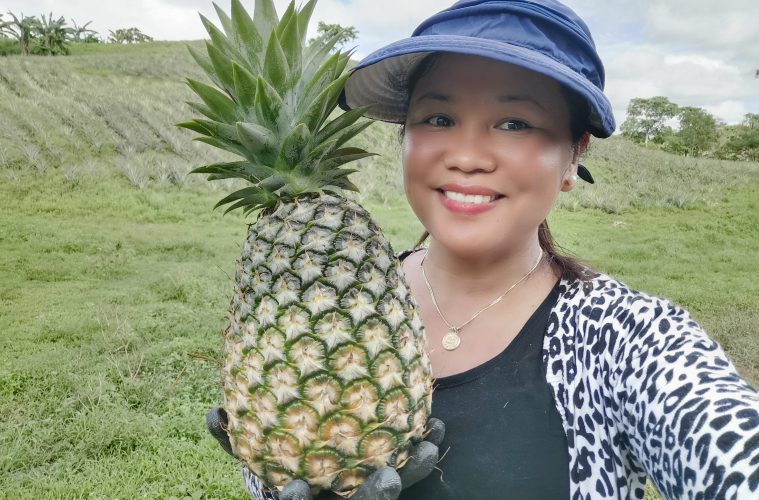 The environment and experiences that we are exposed to are commonly where our passion and interests rise from.

For Lhea Mallillin, 38, a full-time teacher and a weekend farmer, love for agriculture is something that arose from her childhood experiences. “I grew up in a barangay where the major source of living is farming rice. My siblings and I enjoyed our childhood playing in the rice field, we used to fly kites and play agawan base. That is very memorable for me,” said Mallillin. 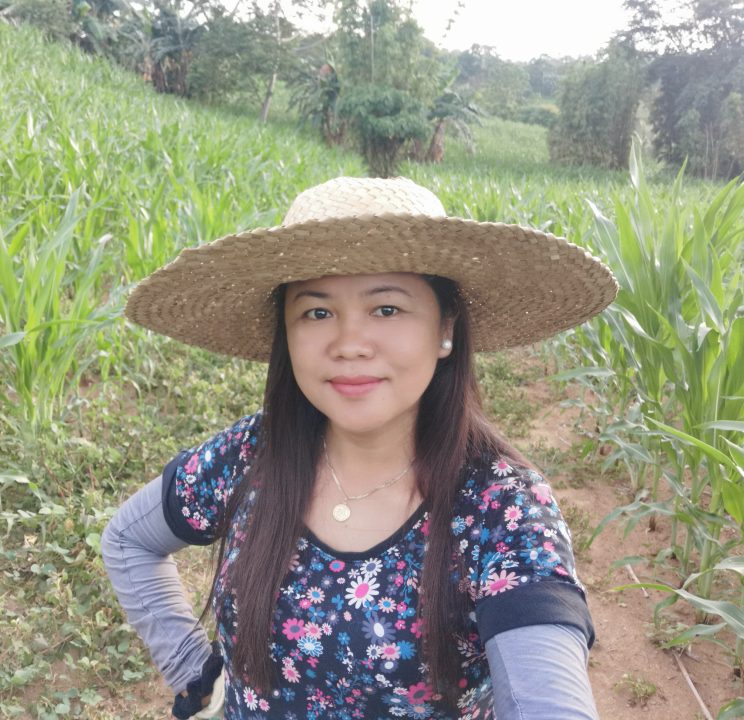 Despite her duty as an educator, Mallillin makes farming as a balancer in dealing with stress.

Reminiscing about her early years, she shared that her parents would grow food in a small backyard that they didn’t own in order to survive and to have something served on their table. This experience taught them the importance of growing food. “I remember when we were relocated three times because the owner of the land we settled on had to sell it. Those financial challenges during our childhood inspired us to work hard for what we are enjoying today.”

This farmer stayed true to her roots and continued the passion that she got from her farmer parents. In 2012, Mallillin, with her sisters Mhelba and Catherine, bought their first parcel of land together. But because her sisters had hectic work schedules outside farming, they let her manage the farm. Soon after, Mallillin ended up buying her sisters’ shares instead.

Cultivating and preparing the soil for the first time has consumed a lot of her energy and resources. Mallillin initially planted cassava and corn, but because the weather was the major threat to these crops, she ended up switching corn to pineapples on more than a hectare of her farm as it can withstand extreme conditions like storms and drought. After four years of developing the farm, she was able to improve crop production and was able to build a farmhouse, water system, and fence for farm animals.

Mallillin is a full-time teacher on weekdays and a farmer on weekends. On her days off, she often brings her paperwork with her while overseeing the things that need to be done on the farm. She has been farming since 2014, but she started growing pineapples last 2018. Her inspiration in cultivating pineapples is her aunt Nenita, who has been farming pineapples for six years. She says, “During harvest season, I saw them delivering tons of pineapples to nearby provinces, including NCR. According to her, pineapples from the town are very easy to market because of its remarkable sweetness and juiciness. She inspired me when she revealed how much I can earn from switching corn to pineapples.” 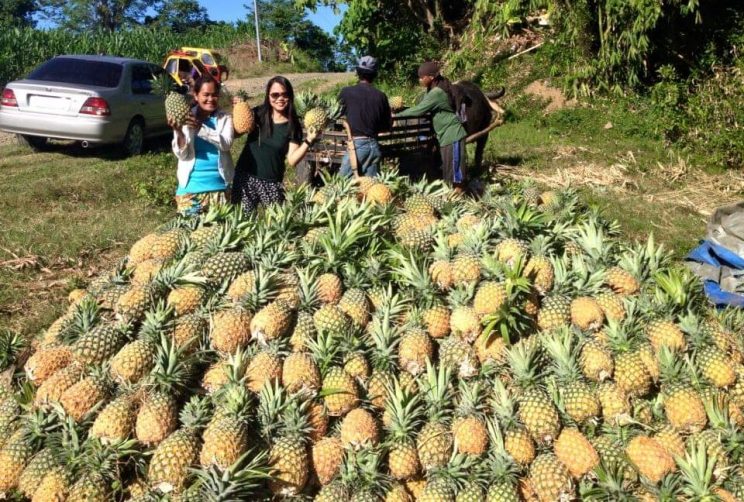 Mallillin (on the right) together with her aunt Nenita (on the left) who motivated her to venture into pineapple farming.

She calls her farm Sangui Gold Farm, which is yet to be registered. Sangui Gold Farm is a 4-hectare farm situated in San Guillermo, Isabela. “Sangui” is derived from her town San Guillermo, while “Gold” refers to the color of their town’s major crops: pineapple, corn, banana, and cassava. It also means that there is gold in farming these crops, particularly pineapples and corn.

As a teacher of grade three students, she also makes sure to integrate farming into the lessons and to instill the importance of food production into her pupils. “One of their performance tasks is to grow at least two kinds of vegetables in recycled pots. In that way, the young learners learn the importance of planting.”

Her duty as a teacher while being a farmer on the side requires proper time management. She says, “I delegate tasks to my farmworkers. I trust their abilities. I always monitor farm activities through calls only when I’m too busy at school.” As per Mallillin, she doesn’t consider farming as work, but a passion that keeps her life in balance. “It is a way of life that I enjoy and where I find my soul, it is my [nature] therapy and it is my own way of releasing stress,” she added.

Mallillin’s farm mainly grows Smooth Cayenne variety of pineapples as these are suitable to the area’s weather conditions. Apart from them being resistant to strong typhoons and drought, they also give the locals higher profit compared to other crops. Out of Mallillin’s four-hectare farm, 1.2 hectares are designated for pineapples where she planted 30,000 mother plants. Other than pineapples, she also cultivates sweet pearl corn, macapuno, white corn, yellow corn, banana, cassava, sweet potato, fruit-bearing trees, and vegetables like sitaw, talong, okra, ampalaya, patola, kalabasa, and ginger. The farm also raises several animals including goats, ducks, and silkie black chickens. 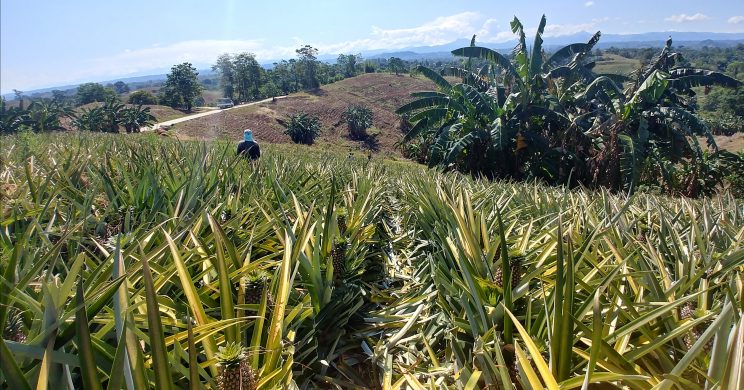 Her pineapple crops cover the 1.2 ha land area of her four-hectare farm in Isabela.

When it comes to growing them, she does not use herbicides, pesticides, and other chemicals. Since her family and farmworkers also consume the produce, she ensures that what they grow is safe and healthy for everyone.

Mallillin’s farm produce is both for selling and personal consumption. And through the farm, she gets to save around P5,000 to P7,000 for her family and farmers’ monthly food costs. Some relatives also benefit from the farm harvests. 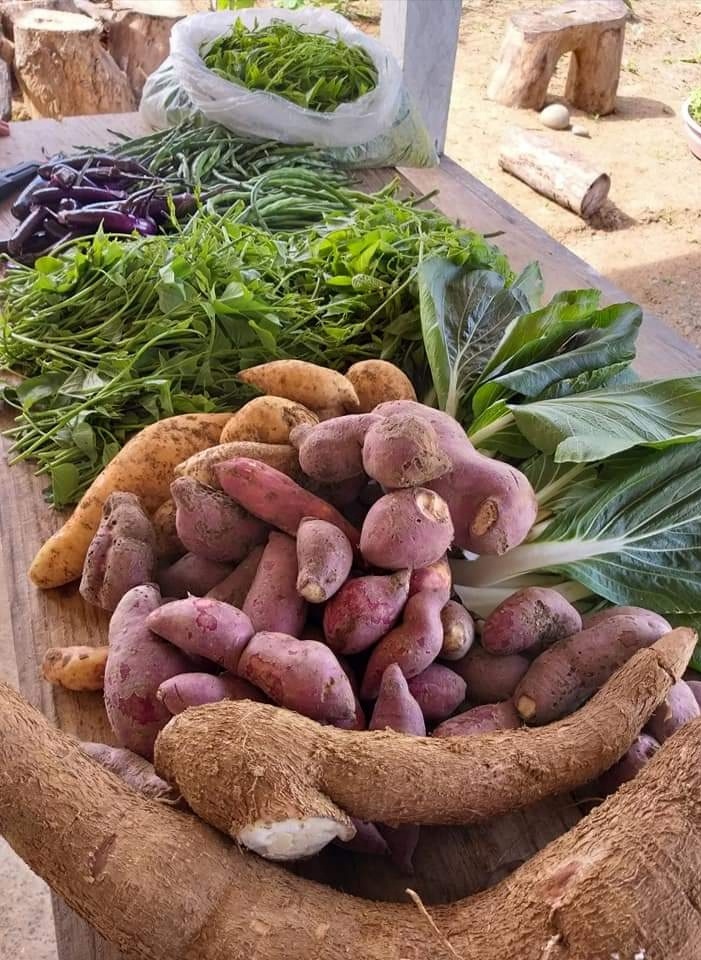 They sell pineapples in town on a retail basis to generate a higher income rather than transacting with a trader for a very low price. Mallillin markets the available produce through her Facebook account with the help of her husband, especially when her partner is not on duty as a policeman. When she gets orders from regular buyers, they deliver the produce for free. Through these strategies, she gets to dispose of the crops easily.

The price of pineapples varies depending on the sizes of the fruits. Regular size costs P20 to P30, medium is around P40, and for large size, it’s from P50 to P60.

Pineapples can be harvested after 18 to 24 months of planting them and dies later when it’s done fruiting. After harvesting pineapples, new ones are planted and the cycle goes on.

In their town, the harvest season of pineapples falls from May to September. Collecting the fruits lasts for three to four months long because the pineapples do not mature at the same phase. “Fruits do not mature at the same time because we do not use fruit inducers, they just bear their fruits naturally. That’s why we harvest for a long period because we only pick the matured fruits,” the farmer added. 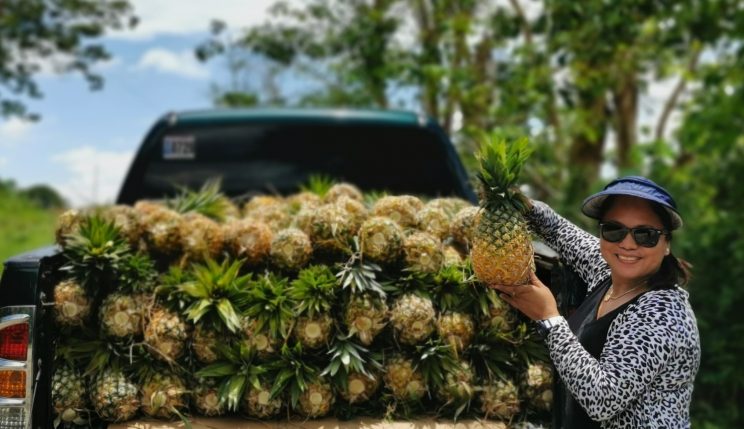 Truckload of pineapples that are ready to market.

In Sangui Gold Farm, they started harvesting pineapples in the first week of June, and presently, they’re almost done reaping the rest of the plants. They gather the fruits twice a week after the first harvest and every harvest, they get 700 to 1000 kilos of pineapples. Each month, they gather 8,000 pieces of pineapples.

Moreover, the farmer shares that she roughly gets P600,000 from selling the pineapple fruits per harvest season, which occurs every two years after planting. Considering the farm and harvest expenses of P220,000, her return of investment is more or less P380,000 during the harvest period.

Besides the fruits, she also sells pineapple slips for those who want to start farming pineapple for additional profit. Since June, Mallillin was able to sell 25,000 slips. 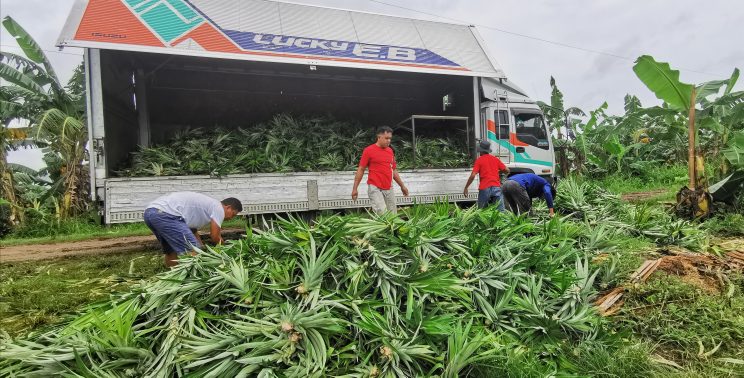 Pineapple slips that are sold for P3 each.

Since this teacher-farmer ventured into farming, she built a good relationship with her two farmhands whom she considers as her family. First is Tata Aldong, a 70-year-old farmer whose expertise is traditional farming. 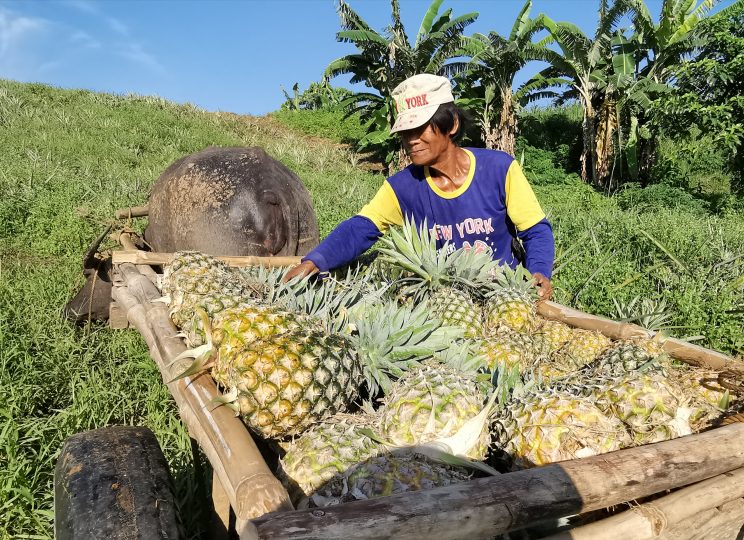 At 70, Tata Aldong still plows and tills the land, and even harvest pineapples.

Second is Leonardo Catigday or Nardo, 40, who’s in charge of the farm animals and the pineapple field. As per Mallillin, she trusts both and leads them with less supervision because that way, the farmers are more productive.

“The farm pays my two regular farmworkers weekly. They just log the work they’ve done then, I pay them at the end of the week even without my supervision because I trust them, they work well,” said Mallillin. Aside from this, they are also provided with kitchen needs. They have the freedom to grow any vegetables that they want on the farm for their consumption too. 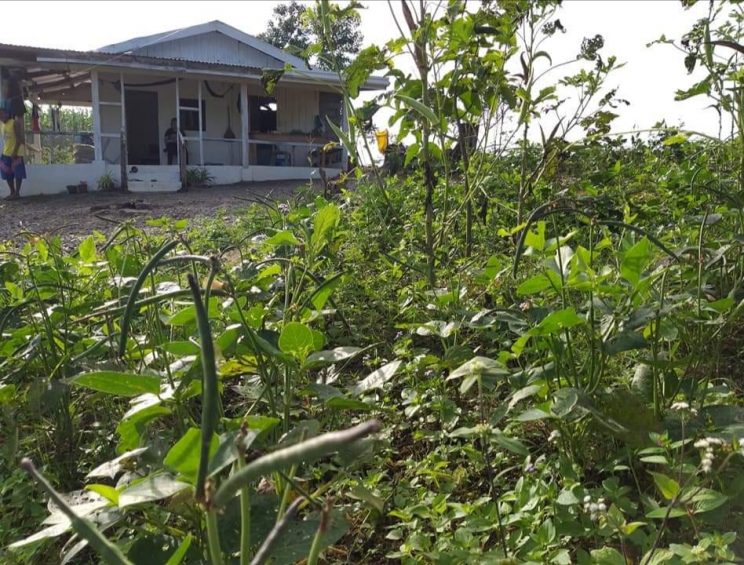 Both workers are living in the farmhouse.

During planting and harvest season, she also gets an additional 10 to 15 workers from the community for manual labor as a way of giving job opportunities to locals.

The farm amid the crisis

Today, the farm continues its routine despite the health crisis we’re facing. However, the adjustments they had to deal with is the low demand for the produce, which is due to the closure of many restaurants and the limited movement of the public.

So far, the major challenge for this farmer is time constraints. Being a fulltime teacher sometimes prevents her from working on the farm due to paperwork. To deal with this, she assigns tasks to her farmworkers to lessen her farm duties. Mallillin also admits that she began with less knowledge about farming so to know more, she gathered knowledge and advice from locals, read articles online, and joined a group of farmers whom she shares ideas with. Calamities are what hugely destroys the farm’s crops, particularly corn. She opts to plant more pineapples than the corn to lessen the farm’s loss. 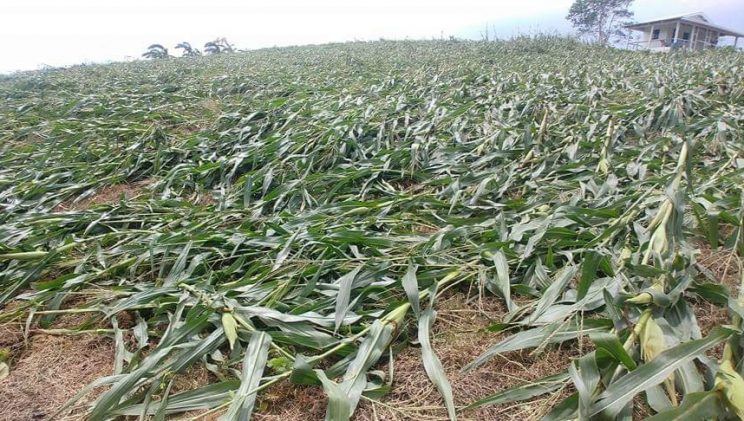 The aftermath of a typhoon that struck the farm.

In the future, Mallillin also aims for the farm to be a tourism and learning site. After what they’ve gone through over the years, it is not only the farm that evolves, but even this farmer remains to grow and learn through farming.

See part 2 to know the techniques behind the success of Mallillin’s pineapple farm.