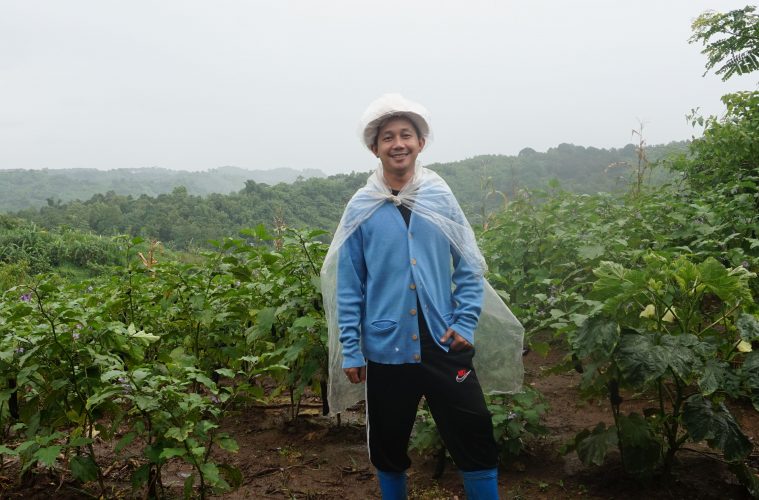 Since COVID-19 has put face-to-face gatherings to a halt, the events industry has continuously been suffering from the effects of the crisis, adding to the rising unemployment rate in the country.

To adjust to this situation, Arby Bautista, an events professional and co-owner of Bautista Nature Farm, turned to farming after his digital and events company was shut down during the quarantine period.

After visiting numerous destinations during events, this farmer decided to transform the family lot into a tourism site, given that he also sees its potential as a place for people to connect with nature. 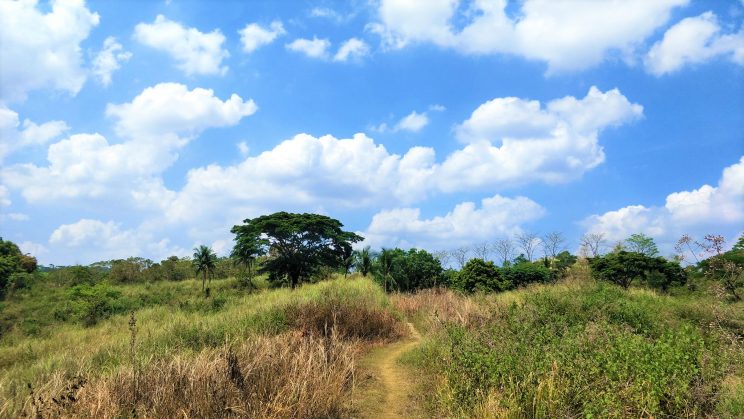 The pathway going to the farm: Their goal is to maintain the farm and to protect the environment by not forming it into a concrete road.

In 2017, Bautista started developing their 37-year-old farm by initially turning it into a campsite until such time that their family has filled the land with fast-growing fruit trees and vegetables. 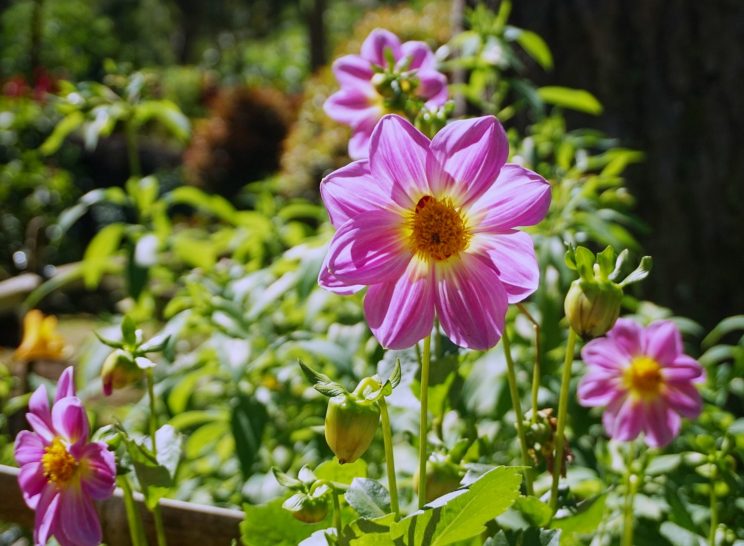 The seeds of these flowers were given by one of the guests, which Bautista planted and nurtured on the farm.

Bautista Nature Farm is almost a four-hectare farm situated in San Jose Del Monte, Bulacan that offers accommodation as well as farming and camping activities like planting and trekking for guests. Presently, the farm does not charge any entrance fee as part of their promotion of the farm. From the access road, guests will have to trek for 30 minutes before arriving at Bautista Nature Farm. 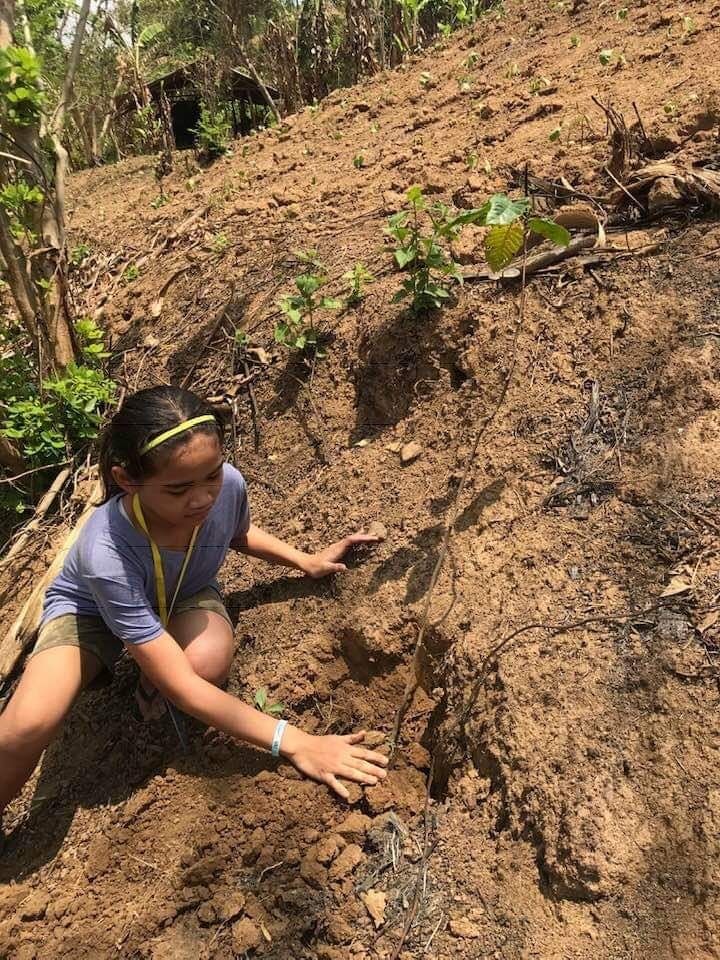 They offer planting activities for students too.

The land where Bautista’s farm stands today was acquired in 1983, under his grandfather’s management, and was passed down through several generations. Despite growing up on a farm with his grandparents, Bautista admits that he didn’t imagine himself being a farmer then. “We are fruit producers. From 1995 to 2010, we are the no. 1 pineapple producer in San Jose Del Monte. But when my grandfather passed away, we struggled and had no time to tend the pineapple crops. Aside from that, I work for a digital company and I don’t see myself as a farmer,” he explained as to why the farm was unproductive before its transformation. 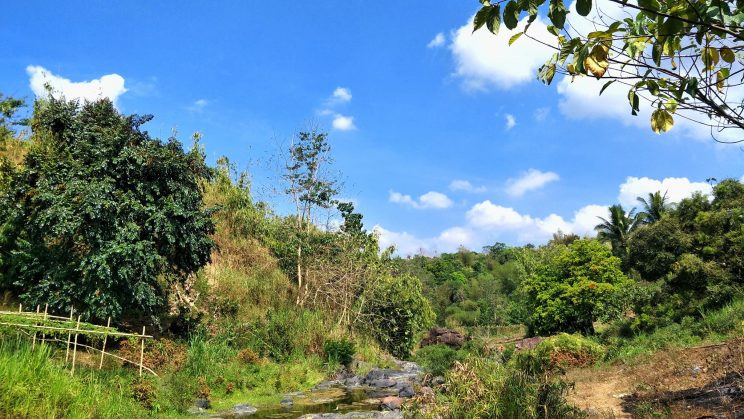 One of the attractions on the farm is this river where guests can swim, fish, and even wash their clothes.

To date, the farm cultivates several fruits and vegetables except for the pineapple crops that used to be its major product. The family allotted one hectare for each of their main crops including cotton fruit, eggplant, and ginger, while their cassava covers half of a hectare. There’s also sitaw, papaya, banana (saba and latundan variety), sweet potato, and chili.

And because these crops are in demand in their town’s markets, the produce is easy to sell. They also supply fresh goods to online sellers, resellers, and other markets in Bulacan. All of the produce is set for selling, which Bautista mainly promotes online.

He shares that there are times that they’ve even faced a shortage of produce due to high market demand. Bautista is now working on his goal to be a vegetable and fruit supplier of a supermarket in Bulacan. Aside from this, the farm also keeps carabaos that help them in transporting goods; rabbits and goats whose meat they supply to restaurants; as well as horses and chickens. 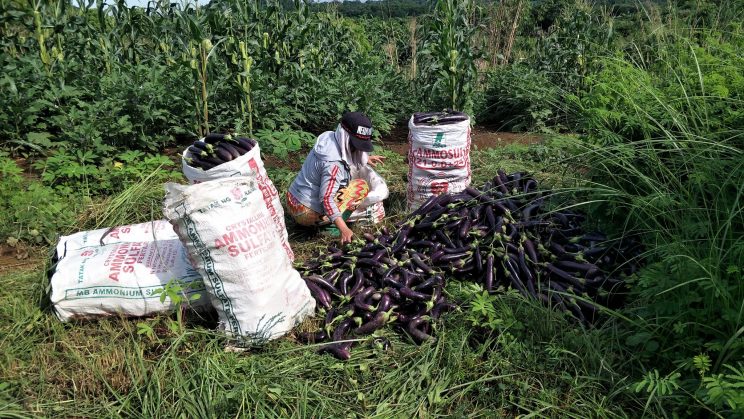 One of the farmers getting the eggplants ready for market.

In terms of harvest, the farmer added that it depends on the crops’ maturity and phasing. For eggplants, they get to harvest twice a week or eight times per month. It costs P20 per kilo of eggplants and every week, they get to sell over 700 kilos.

Intending to engage their community into farming, he says, “We started [farming] before as a family and when it grew, we hired our neighbors that were unemployed.” Apart from their family members, they have regular five farmhands from their neighborhood who tend the farm’s crops and animals daily. 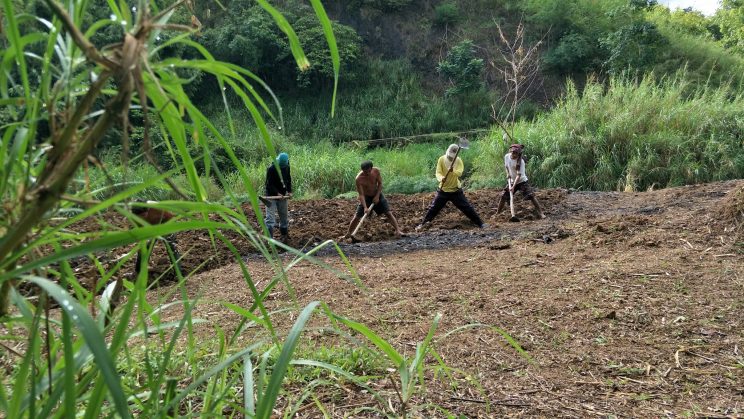 Some of the farmworkers from their neighborhood.

During the rainy or lean season, some farmworkers opt to look for other jobs then come back when the peak season arrives. The maximum workers on the farm are 15 to 20 persons. Aside from free goods, the farm also helps the workers generate a stable income despite the crisis. As per Bautista, they also sell seeds and fertilizers to farmers at a low price, which the farmers can grow in their own spaces. After the farmers grow the crops, Bautista helps them sell all their harvests.

Today, the farm is closed to abide by the local government’s quarantine rules, but the farm is faring well because their farming activities continue despite the closure. The only difference that they had to adapt to is the absence of guests, which does not hugely affect the farm’s sales, according to Bautista. The farm’s closure to the public has been an avenue for him to focus on the crops, too. 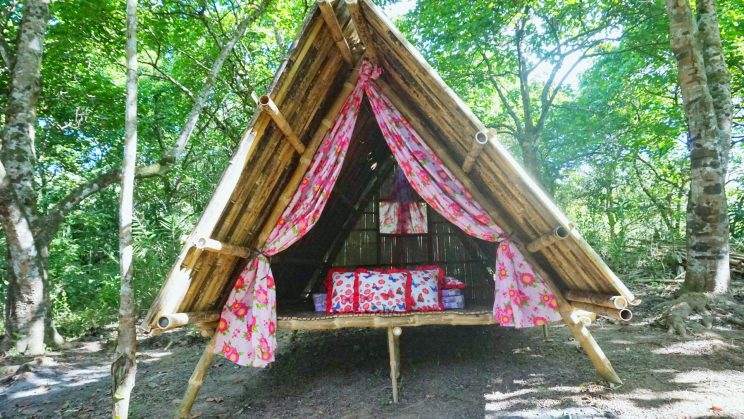 The farm has accommodations built by the local farmers using native bamboo obtained on site.

Being in the business for years, he added that they had no big adjustments in marketing the produce. In terms of knowledge, online accessibility and connections have helped him and his helpers to learn the farming methods that they practice on the farm.

“My family’s current focus is on the farm. Actually, while my father is on the farm, I am the one assigned for digital [marketing] and delivery of goods. We build a good partnership,” said Bautista. As per the farmer, during the quarantine period, the farm has also been an outlet that helps him to heal from depression. “There’s not a lot of changes except that we are a private farm again. Honestly, the farm has been the safest place during this pandemic because it gets less exposure from the virus,” he added.

In one of his vlogs, he did not only share their post-harvest routine on the farm, but he also revealed the challenge that they have to face every time they travel the goods from the farm to marketplaces. He wrote, “Before we deliver the vegetables or goods from the farm, we have to use a carabao to carry them.” After a one kilometer walk through the muddy trail, the crops will be transferred to a tricycle going to their house or to the market. And if the produce is not enough to fill the demand of the buyers, they will have to walk back to the farm and harvest again.

Bautista showed in the video how he harvests and transports the crops to the market, particularly the eggplants. The eggplants are sorted, washed, and placed in sacks. If there are damaged crops, they immediately remove them to prevent the damage from spreading to other plants. Next to harvest is selling and delivering the produce to their regular buyers in the market.

Check out his vlog:

Through his videos, he aims to amplify the importance of local farmers in food security and to highlight their daily farm experiences. In the future, Bautista also plans to open the farm for training and to add more value-added goods.