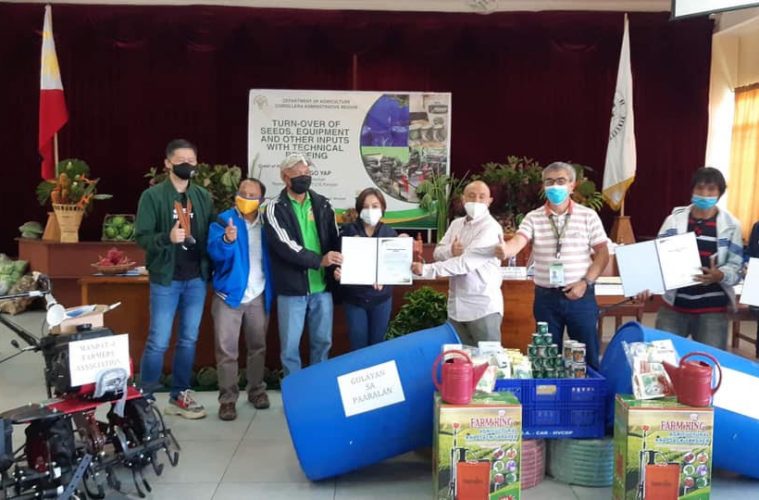 The Department of Agriculture - Cordillera, through its High Value Crops and Development Program (HVCDP), turned over seeds, equipment and other farm inputs to farmer beneficiaries in seven Benguet towns as part of the continuing support of the agency during the COVID-19 pandemic. (Photo by DA-RAFIS)

LA TRINIDAD, Benguet – The producers of highland vegetables from the province of Benguet received more than P35 million worth of agriculture inputs to boosts the vegetable industry in the province.

The agriculture inputs include vegetable seeds, hand tractors, HDPE pipes, plastic sheets, drum, and seed storage were distributed among the seven municipalities such as Atok, Bakun, Buguias, Kapangan, Kibungan, Mankayan, and Kabayan as well as the government line agencies like the Department of Education (DepEd)- Benguet for the “Gulayan sa Paaralan” and the Department of Social Welfare and Development (DSWD)- Cordillera for the “Gulayan sa Barangay.” The share of the other municipalities was given earlier this year during the ECQ.

Yap said he will continue to support the Benguet farmers as they are the foundation of the province. He stressed how incomparable their vegetables are with that of the others.

He mentioned that he pushes for the development of the agriculture sector including the 31-kilometer Farm-to-Market Road (FMR) for the province of Benguet for the fiscal 2021 budget.

On top of that, he also mentioned allocating P25M pesos from his personal fund purposely to lend to small farmers without interest while looking for other programs and projects to support big farmers affected by the crisis.

Governor Diclas commended the quick response of the DA in assisting the farmers during the times of pandemic. He also hopes to materialize the proposed 20M pesos worth of processing facility to accommodate the oversupply of vegetables.

Odsey underscored the continuous support of the agency in implementing its programs and project in the province such as the input assistance, expanded Survival and Recovery (e-SURE) loan, and Kadiwa ni Ani at Kita Program.

He wishes the success of the province to remain as the top producer of vegetables to feed the Filipinos.

Prior to the turn-over, HVCDP Focal Person Joan Bacbac discussed the basic HVCDP guidelines on how to avail the DA assistance. Among the guidelines include that the organization should be registered any registering and accrediting body (DOLE, SEC, CDA); DA accredited, and the members should be RSBSA (Registry System of Basic Sectors in Agriculture) registered.

She noted that the priority is given to those having a Good Agricultural Practices (GAP) certification.