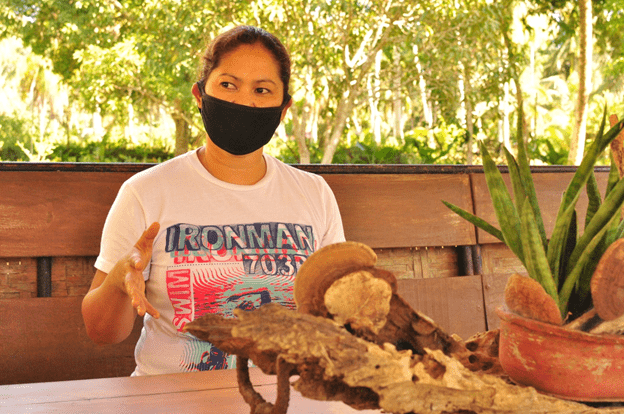 CEBU CITY – Rona Dengue, 40, is now considered Bohol’s leading farmer-scientist queen of cultured fungi/mushrooms earning an income of about P50,000 a week from her mushroom beds in her organic vegetable garden situated in a 2.5-hectare agricultural property in Sambog, Corella town in Bohol.

Rona was born in Tagum City Davao who is an Accounting graduate remembers her childhood revolving around farm tasks in the family lot in Mindanao. She recalled that her parents would always prefer her to plant anything because they believed she has “green thumb.”

Her infatuation with mushrooms started in an unexpected turns and twists. A zumba enthusiast and into healthy eating and lifestyle, Rona and her husband Jares tend an organic vegetable garden that they called “Green Thumb Farm” which ha problems with its name at the Intellectual Property Office (IPO) but has now been cleared.

Without a clear market from their organic farm and with almost every farmer in Bohol are into organic vegetables and fruits, their produce more often goes to their personal consumption or she gave them to Zumba mates.

“One of my classmates at Zumba who trained at the Department of Agriculture’s Agricultural Promotion Center in oyster mushroom (Pleurotus ostreatus) production, told me about it,” Rona recalled, and she got interested and research on how to grow mushrooms and took online tutorials from YouTube.

Rona’s interest on mushrooms became a passion and noting the potential for mushrooms in Bohol’s eco-tourism and hotel/resort requirements, she found her way to join free government training and with hard work and determination to carve a niche in the fungi world, she started serious mushroom farming in 2017.

Farming wild mushrooms only come out in seasons with lightning and thunder, Rona said but she was determined and strengthened by her husband’s support she went into mushroom culture.

“All you need is well managed humidity and well-ventilated sheds surrounded by natural pest repellants plants such as cultivated basil, ginger, and wild basil (kagongkagong), pests are managed right to let these fungi grow so well the whole year round,” Rona bared.

Rona explained that mushroom culture grows from tissue culture, and a laboratory sits in the farm compound so they could produce the tissue they would put in the fruiting bags to grow. In her farm, they produce grey, white and pink oyster mushrooms and milky white mushrooms (Calocybe indica).

Rona and Jares never dreamed of mushroom culture but determined to make it work, Rona now needed the support of her husband.

Himself an electronics communications engineer working at Bohol Light Company, Jares’ creativity was tested when Rona asked him to fabricate a structure converting an old poultry production house needed into a mushroom growing house.

Starting off with 4,000 mushroom fruiting bags, Rona has to get into the production of the substrate, learning every trick she can pick and her accounting experience getting her a mental picture of the costs in every process along the way.

“Preparing the substrate was among the most backbreaking tasks. She starts early and would be back in the house late,” Jares said noting the hard work his wife invested in the farm. Every night, her body aches, she would ask to rub it with ointment, Jares added.

Investing in sweat, tears and more hard work and assisted by farmhands, Rona got into every step of the process, mentally costing the outputs, and calculating where they could recoup costs so it could be reflected in the selling price.

“In our very busy schedule, we could only manage two kids,” Jares smiled and added it was not only it hard, it was also dangerous.

Rona said they didn’t have the right equipment. They must chop the rice stalks to form the substrate where the tissue cultured oyster mushroom could germinate, and manually place them in fruiting bags.

These bags are then placed under pasteurization to kill any bacteria that might kill the fungi. At the start, “we used a lidded steel drum without locks to kill the bacteria in the fruiting bags, and a near accident happened,” Rona noted.

“The pressure inside the drum built up and with the gas building inside, it was good enough that the helper was not totally within the range when the steel lid blew off and hit the shed ceiling, or the helper could have been fatally hurt. It was a huge failure, but it did not stop us,” she narrated.

The farm where they prepare the fruiting bags stands a mechanical chopper and a boiler with a pasteurization chamber which has since replaced the crude and dangerous steel drum; sacks of rice straws, marked as to the date of harvest and these are chopped to fill the fruiting bags.

In a short tour in the facility, Rona showed a huge pile of rejected fruiting bags, one that costs about P20.00 each, and a reminder at how carelessness and diversion from the very scientific procedure can cause a production failure.

With an accountant’s mindset she records and noted everything that helped them to get better at what they do and kept failure factor at the most minimum. Now they have the mushrooms. The next consideration is where to sell them.

Rona bared that the Department of Agriculture’s APC, Agricultural Training Institute (ATI), Department of Trade and Industry (DTI) through the Kapatid Mentor Me Program, and their Negosyo Assistance desks as well as the Department of Science and Technology (DSOT) have helped them tremendously in product development, packaging assistance and market services.

“We were having a good time delivering to some resorts and hotels in Panglao, until the pandemic hit us. We also opened to two markets in Cebu– Rustans and Landers. They asked for a supply of 200 kilos every week, that was when we realized that there is still a huge market,” Jares said.

At present, the farm could only supply a little over 100 kilos of grey mushrooms a week, while led them to find contract growers to beat the demand. There are competitors, but there is still an underserved part of the community that will still come, the couple were very optimistic.

“We were on our way to a Manila food fair on the day we had the island closed for nationwide lockdown due to COVID-19 pandemic. It would have exposed us to the whole demand market,” Rona said, highlighting on an opportunity that was lost.

She added that they were ready and had a few new products prepared. They had to find other markets to sell the harvests before they stale. Perishable products, mushrooms only have a few days to be sold before they wilt and could not be sold anymore, Rona said.

Rona went on that they went to online marketing and engaging resellers until all those products were sold out. Now they planned to strengthen food processing and learning everything to add value to mushroom products.

Today the Dengue’s Green Thumb Farm is an venue for technology sharing in mushroom farming accredited by the DA-Agricultural Training Institute (ATI) which is assisting Corella town to become Bohol’s mushroom capital.

Agricultural Training Institute accredited learning site, the Denque’s Green Thumb Farm has been a venue for techo sharing in mushroom farming and is now being readied with Corella soon to become Bohol’s mushroom capital.