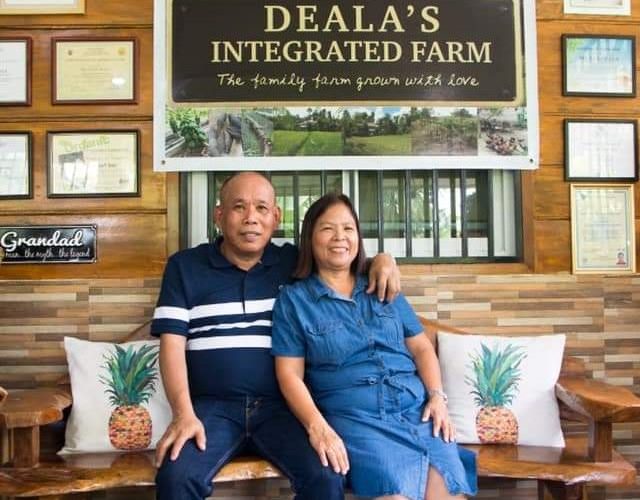 Couple with no agriculture background developed a farm for retirement

Many people invest in agriculture as part of their retirement plans. The same went for Jessie and Lea Deala, both 60, who ventured into farming to secure their life after retirement.

Both husband and wife grew up with parents whose means of support was agriculture. Being used to this lifestyle, they bought a farm despite lacking farm experience. At first, they had limited knowledge of farming and all they got was their ambition to learn and establish the farm before leaving their jobs for good. Several years later, they successfully developed an integrated farm with crop and animal production. 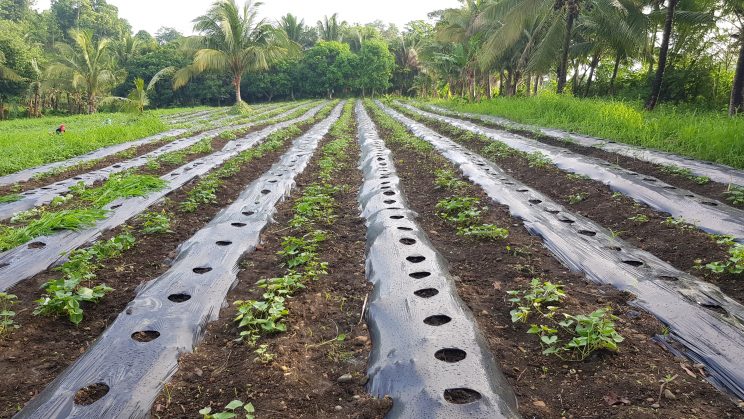 12 years ago, some of Lea’s relatives offered them the lot where Dealas’ farm stands today due to the default of real estate taxes. They offered the land to the Dealas in hopes of keeping the property within their family. Lea noted, “At first, we were hesitant to buy the lot because of the workload it will entail, provided that it was undeveloped and had no electricity then.” And according to her, it is an inheritance from their ancestors so it would be a waste if they gave it up. With this, although the land needs a lot of work, the couple bought the land.

Jessie Deala, husband of Lea, is an OFW who often travels for work. He buys new seeds from the countries that he visits and brings them home when he’s on vacation. Jessie added that whenever he is in the Philippines, he spends most of his time on the farm to oversee its construction. 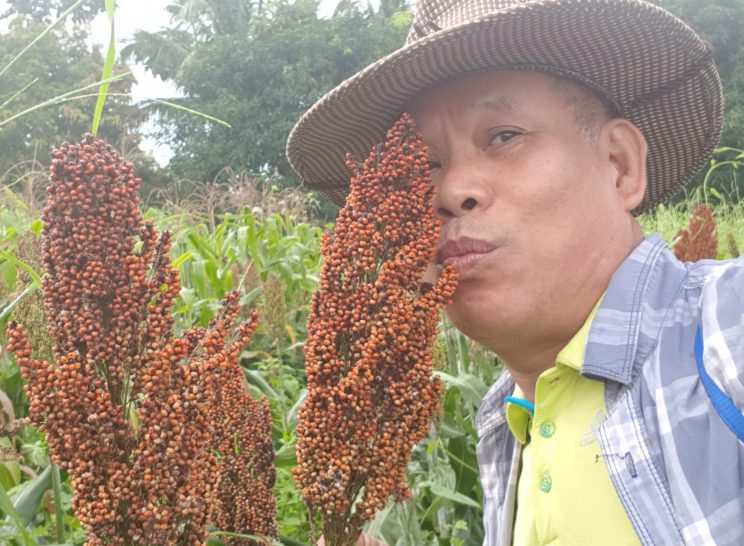 Due to COVID-19 situation, he has been in the country since February, which enabled him to further enhance the farm facilities.

Lea, on the other hand, is full-time in spearheading the farm, overseeing daily operations, and giving tours to visitors. In 2016, she also won the 4th place in the Department of Agriculture’s Search for Outstanding Rural Women.

Deala’s Integrated Farm is located in Dingle, Iloilo. It originally measured 1.6 hectares. When another relative offered a parcel of land adjacent to their farm, they decided to expand their farmland, making the total measurement of the farm more than three hectares.

The farm is close to their hearts not only because it is something that they own, but also because it serves as an avenue for their family to build memories through agriculture. “Even when we are no longer in this world, we believe that our memories will still remain and remembered by our children and grandchildren through this farm,” said the Dealas.

When it comes to the farm methods, they said, “Our farming system is integrated, which is defined as a farming system with simultaneous activities involving crops and animals.” Through integrated farming, elements on the Dealas’ farm support one another, allowing them to reduce external outputs.

Most of the crops that they cultivate are the crops that they want to consume like Japanese sweet potato (Satsuma Imo), crops that are in demand yet with limited supply like adlai (Coix lacryma-jobi L.), and rare, endemic crops that separates them from competitors such as banawak or carabao teats (Uvaria rufa). “We decided to grow endemic or rare crops as we want to be different from other farms. We believe that growing crops with high demand, yet with lesser supply will be beneficial to our farm.”

Some of the dragon fruit trees. 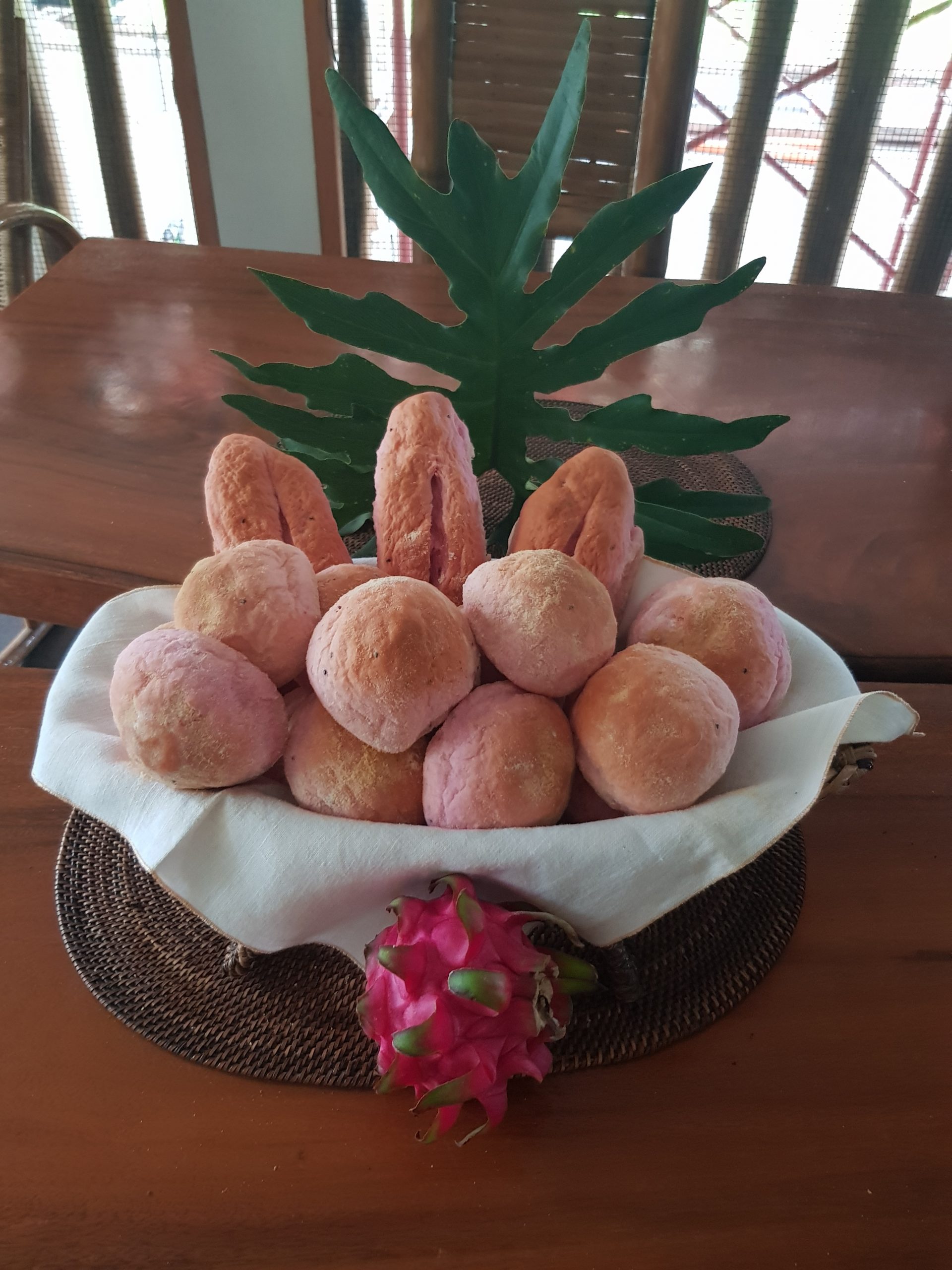 Deala’s Integrated farm also offers farm tours where they get to share about the farm’s agricultural practices, integrated farming system, and organic farming methods like making natural fertilizers. Moreover, the farm can also serve as a venue for seminars and other events.

In terms of yields, they harvest about 100 sacks of corn and 100 sacks of rice twice a year, while most of their crops including corn, adlai, sorghum, camote, and eggplants are gathered annually. 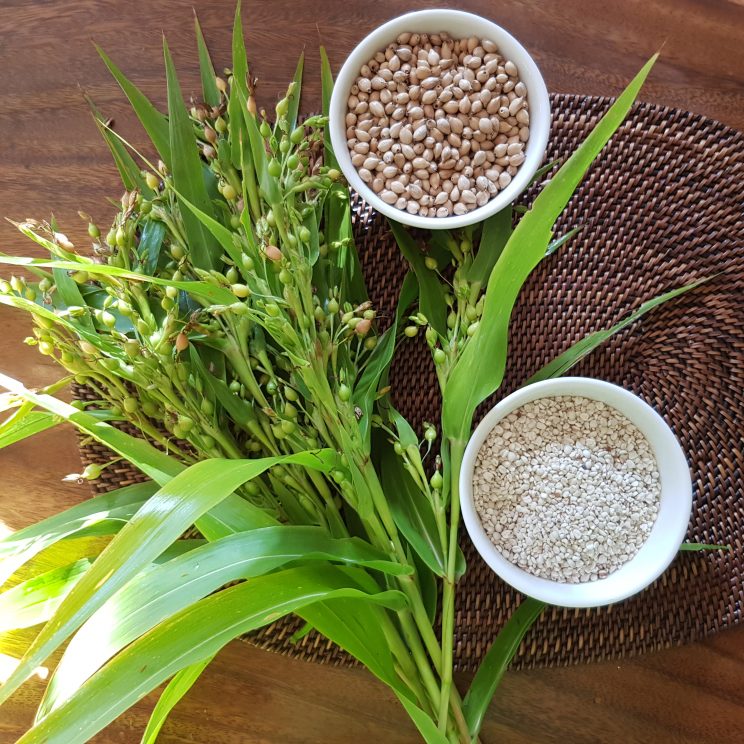 Adlai, or puyas, in Ilonggo.

Apart from raw goods, they also offer value-added products like cacao tablea that costs P50 per pack, salted egg from Itik Pinas (native duck) for P12 each, and a package of dressed chicken with papaya and lemongrass that costs P350. They also sell native lechon for P5,000 to P7,000, depending on weight. Each month, they use around 50 packs of cacao tablea, which they prepare as welcome drinks to guests. During festive seasons, they also get to sell several lechons in a month. 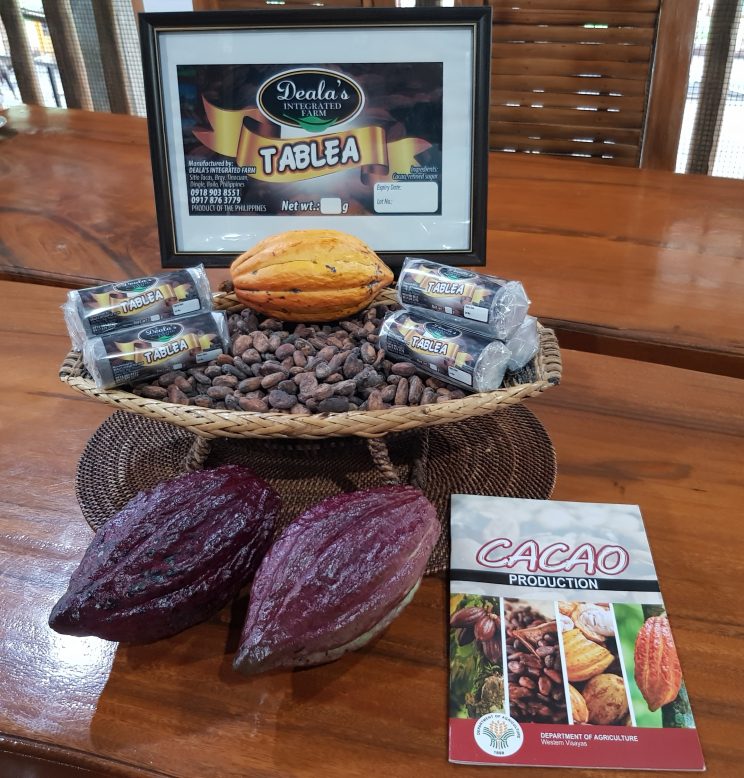 One of their value-added products is this cacao tablea that costs P50 per pack.

The farm’s produce is both for consumption and retailing. Every month, the couple saves around P10,000 to P20,000 for their food costs and an extra P20,000 for livestock feeds. In marketing them, they regularly post the available produce on their Facebook page. Friends, neighbors, residents from nearby cities, schools, and offices are some of their regular customers.

The farm raises more than 200 Itik Pinas, whose eggs are sold at P12 each.

They feed their livestock with commercial feeds (10-20%) supplemented with rice bran, milled corn, trichantera (Trichanthera gigantea), bananas, kangkong, fruits, camote, and kitchen scraps, which they gather from the farm too.

For their tilapia, they give them commercial feeds, green leafy plants, and kuhol or snail. The fishes are occasionally nourished with young cassava leaves as well. Feeding time happens twice a day at seven in the morning and three in the afternoon.

They raise them for selling and consumption too. As for the income, they get 20% profit from the capital, which the couple opts not to disclose.

In the past 12 years, the couple has also faced a lot of hurdles. One of which includes the use of technology for faster farming. “We did not know the technologies in planting other vegetables. So we coordinated with government agencies to learn more about farming. We are thankful for the support of the Department of Agriculture VI and Agricultural Training Institute VI,” the couple shared.

The couple had no background in agriculture when they bought the farm. 12 years later, they succeeded in growing different crops, including this field of rice.

Presently, they are having a hard time with the high staff turnover. As per them, training alone is time-consuming. To solve this, they offer a competitive salary, free food, and lodging. The couple also conducts a get-together every Saturday, gives cash rewards for good service, and provides funds if the workers need short-term loans.

The farm has five permanent farmhands that involve relatives, friends, and other women from their neighborhood. Years back, most employees were on-call, but when they opened the farm to the public and offered guest houses, that’s when they hired personnel. Other laborers are assigned to the construction and improvement of the farm’s facilities as well.

The farm consists of five permanent farmworkers who are relatives, neighbors, and friends of the Dealas.

Amid the quarantine, the farm hasn’t stopped its operations except that it does not entertain visitors for farm staycations and tours to follow the quarantine protocols. This has helped the farmworkers to have a stable income despite the crisis.

Deala’s farm is only open to those who would like to buy goods. And guests who have an appointment will be the only ones allowed to enter the farm premises. Walk-in visitors are not allowed yet. The farm allows buyers to either pick their items up or to avail of their delivery services.

When it comes to sales, since no tourists are coming in, revenues from entrance fees and seminars were put to a halt, especially during the first wave of community quarantine. Buyers of plants and fruits decreased, too. But the Dealas stressed, “Nonetheless, having an integrated farming system has mitigated losses as there is an increase in demand for raising native livestock.”

Now that the quarantine has been less strict in terms of people’s movement, the number of visitors is rising again. “We have a lot of OFW visitors who purchase poultry and native pigs since they cannot work abroad and are now trying to venture in livestock raising.” The couple added that most of the OFWs who visit their farm ask for tips in growing native livestock. Because of this, their sales for livestock boosted compared to their sales before.

This quarantine season, the Dealas also intensified their social media presence. “The beauty of integrated farming is that even though there are no tourists, at least we have livestock, fruits, and vegetables which we can sell online,” said the Dealas.

The couple aims to focus more into farm tourism and to hold more seminars in the future. To grow more uncommon plants and to have a bed and breakfast feature on the farm are the things that they plan on doing next.