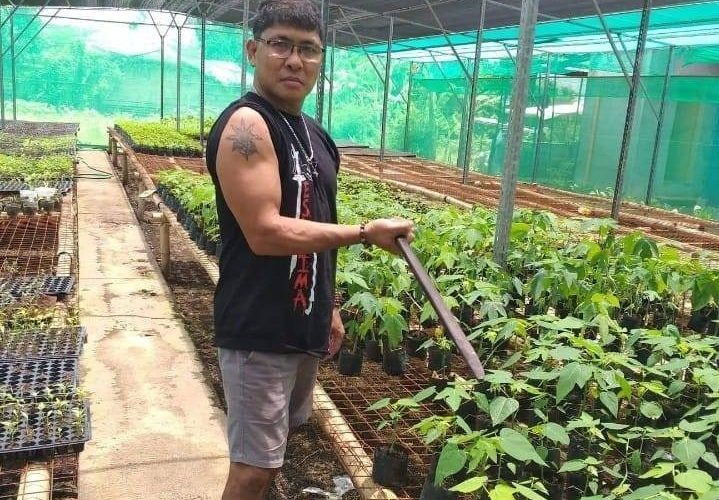 As opposed to what other people think, one doesn’t have to buy a lot in order to start a farm business. Arnel Tandang, 50, operations manager and owner of AGT Seedlings Supply, proves that establishing an agricultural enterprise is possible even if you don’t own property.

Tandang, who rents land to run his seedling business, started offering services to the public in the first quarter of 2019. His inclination to farming takes him back to 2005, when he used to work as a salesman for an agricultural product. This experience led him to be the marketing and sales manager of an agricultural company, and now, a full-time farmer.

Realizing the potential income from selling seedlings, which he learned from his previous jobs, Tandang decided to build his own seedling business. 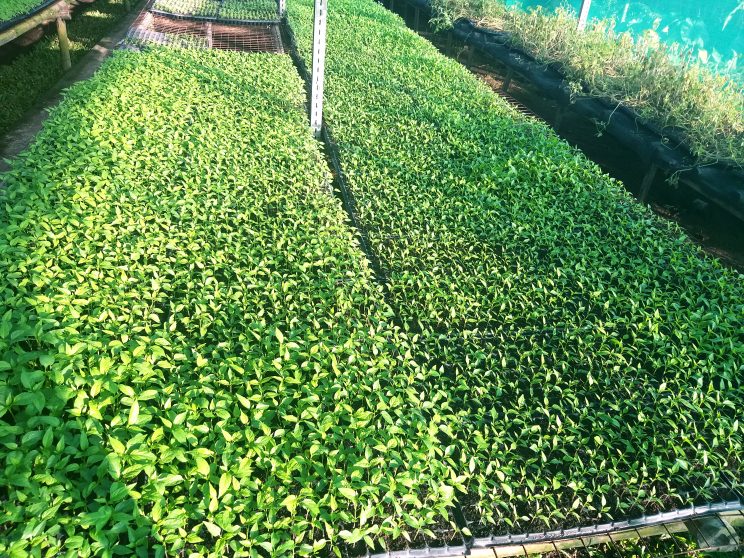 A businessman and fighter

AGT Seedlings Supply, named after Tandang’s initials, mainly markets vegetable seedlings that are largely supplied to farmers in CALABARZON. On the side, he also teaches kalis ilustrisimo, a Filipino traditional martial art, and sells swords used in the said fighting style.

Tandang’s farm is located in Calauan, Laguna, with a total measurement of 2,864 square meters. This includes two greenhouses allotted for growing lettuce in hydroponic and aquaponic systems; one greenhouse is 500sqm-wide, while the other measures 1500sqm. Both greenhouses can carry up to more than 7,900 lettuce heads each. The remaining area is set for the plant nurseries where other crops are cultivated in soil. To date, they offer seedlings of various vegetables, herbs, and ornamentals.

Their objective, aside from being the top seedling producer in the Philippines, is to improve the profit of local farmers by providing affordable quality seedlings. 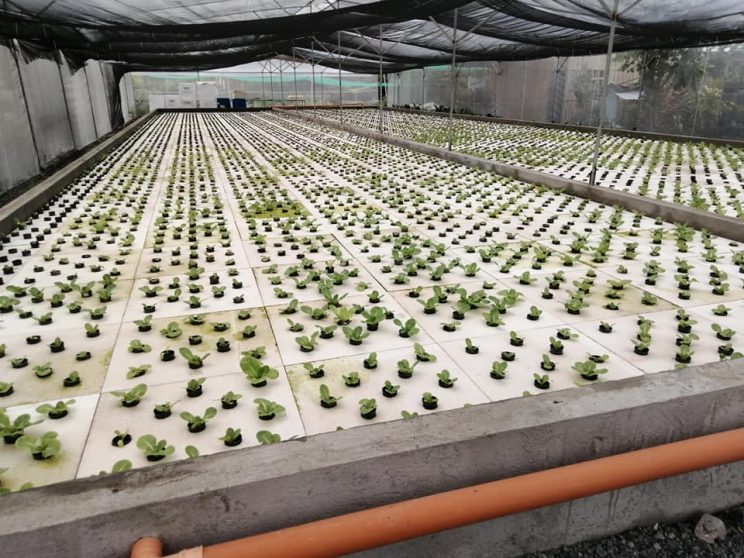 The hydroponics greenhouse where green ice and romaine varieties of lettuce are mostly grown. Each lettuce seedling is priced at P2.50, while harvested lettuce costs around P100 to P150 per kilo.

At first, Tandang only grew seedlings in trays, but as the farm progressed, he began practicing hydroponic and aquaponic methods. “Practicing aquaponics is like hitting two birds with one stone,” said the farmer. It does not only save space, but while raising fish, he also produces plants. This way, he earns more than the profit that he obtains from selling crops or seedlings alone. 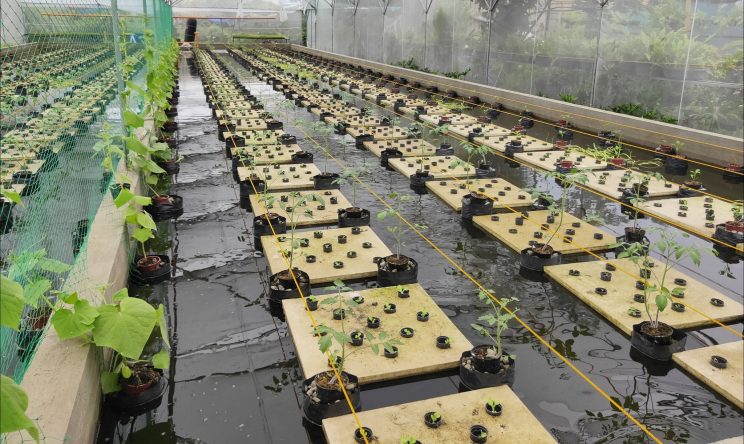 In his aquaponics greenhouse, he raises tilapia fish along with tending lettuce and other crops.

“We produce food using organic agricultural inputs from fertilizers to pesticides. With this, we ensure that it is safe to consume and has no harmful effect in our environment,” Tandang says.

In both hydroponic and aquaponic systems, their key crops are romaine and green ice lettuce. When asked why they predominantly produce lettuce, Tandang explained, “Lettuce and chili are high-value crops that are not just easy to market, but also provide high income.” Every week, they can harvest up to 1,975kg or over 7,900 heads of lettuce. Other crops on the farm include vegetables like eggplants and bitter gourd, herbs like basil, tarragon, and rosemary, and ornamentals such as sunflower and vinca. They also cultivate crops according to their clients’ needs. 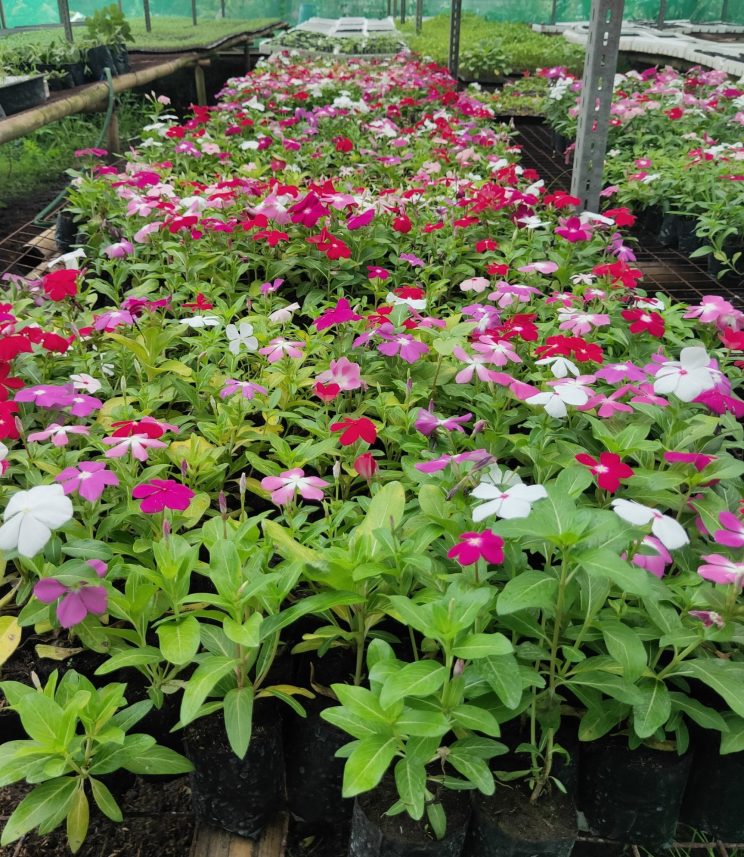 Several vinca flowers that are ready for selling. For vinca seedlings, this costs P2,080 for a tray that consists of 104 holes. While the vinca seeds are sold at P20 each.

The prices of the seedlings vary depending on the market’s prevailing price. Other than supplying to local farmers, some of their clients are established companies, local markets, and resellers. They also consume the farm’s produce, which helps them save about 50 percent of their food consumption. 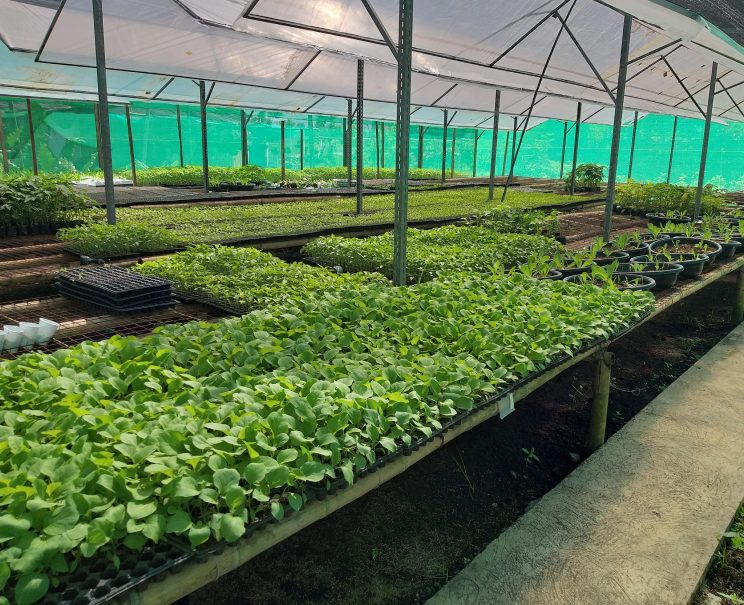 Besides the high-value crops, they also plant based on the requests of their clients.

Apart from selling seedlings and fully grown plants, they also put their customized Polyvinyl chloride (PVC) hydroponic units on sale that cost from P12,000 to P16,000, depending on size and design. Planting materials that they also market include garden soil mix, organic and inorganic fertilizer, seedling trays, and natural growth enhancer.

On top of that, they also offer consultancy services managed by Tandang and his son Angelo, as well as edible landscaping services, which is handled by his wife, Lorena. 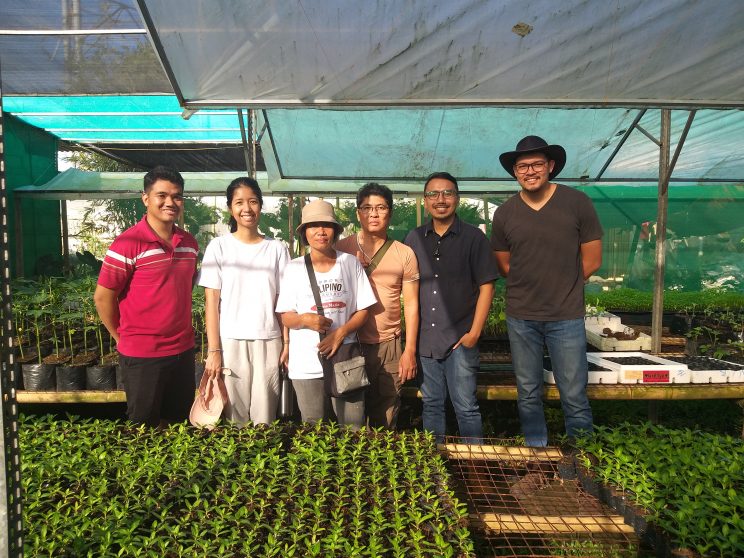 The Tandang family with farm visitors: On the leftmost side is Angelo Tandang, son of Lorena Tandang (third from the left) and Arnel Tandang (wearing an orange shirt in the middle).

Help in the farm

Tandang commenced the farm with only two farmhands, but now, they have four farmworkers and one sales agent. The farm continues to support the employees’ income despite the crisis as their farm activities weren’t hampered. Tandang provides shelter and shares his knowledge in farming to his workers too.

Amid the community quarantine, the farm is faring well as production continues. However, Tandang admitted that it does not perform its maximum capacity due to the limited market. Because of this, sales also dropped based on their sales projection. To adapt, they entered the online platform, where most of the transactions are now settled through the internet and phone calls. 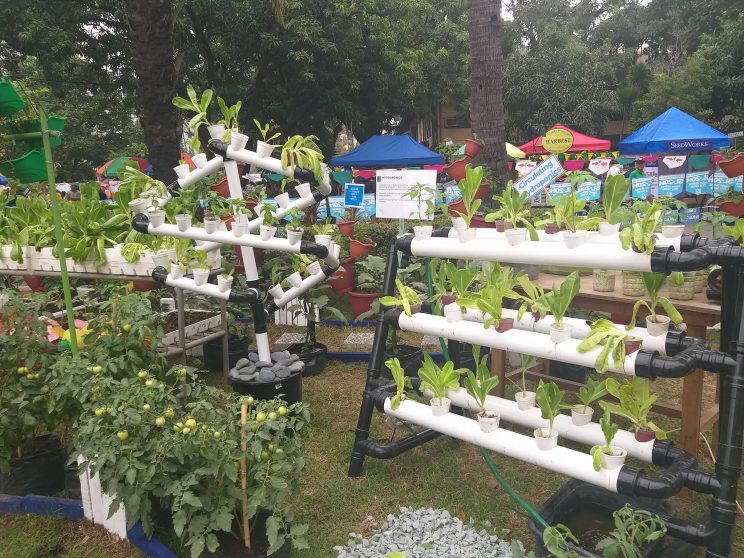 Samples of their hydroponics setup during the Bureau of Plant Industry Anniversary Week.

As per the entrepreneur, there are times that paying for their land rental also becomes a challenge. For the rental and electricity charges, they pay about P40,000 a month. But because the sales that they earn from the seedlings are enough, he stressed that they get to recover from their expenses. Tandang also considers buying his own lot once they have accumulated sufficient funds.

In the future, Tandang wants to build an agritourism site with a farm to table element and that will not only serve as a learning site not only for farmers, but also for young learners.