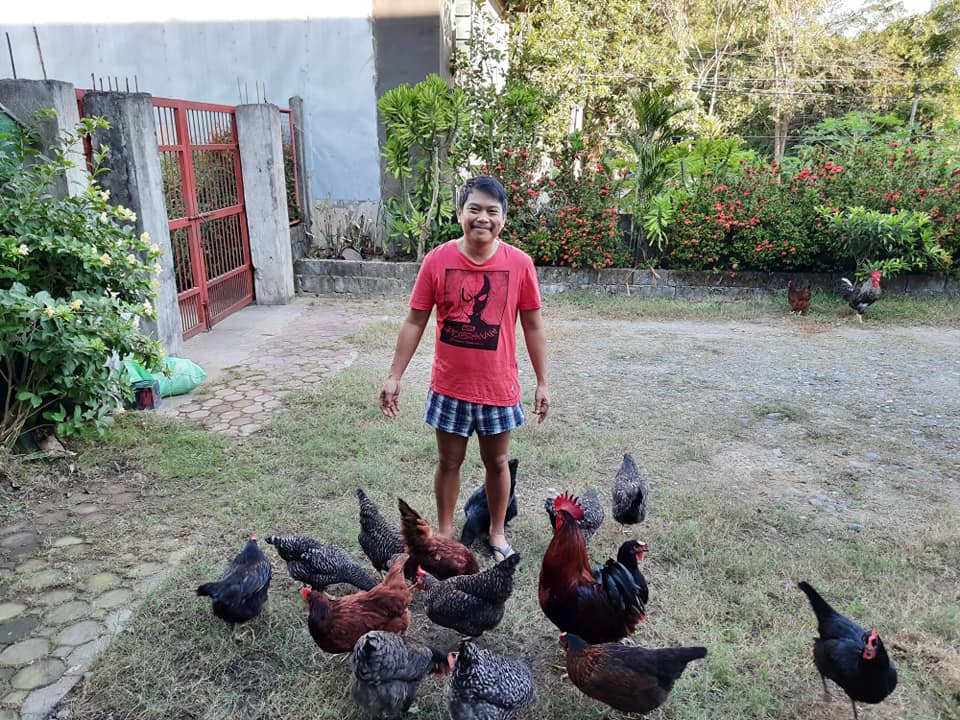 Christopher Domingo posing with their chickens.

When we talk about urban farming what usually comes to mind is growing vegetables, fruits, and all sorts of edible plants which could be used for personal consumption. A couple decided to take a different approach and invested in chickens instead.

“We have a small flock of chickens as we venture in a self-sustainable chicken meat and egg production initially for our household consumption. Our coop covers about 40 square meters of our yard,” Christopher said.

They began raising chickens back in February 2019 with just seven heads of month-old chicks. Prior to that, the couple already had a strong inclination to growing their own food as they have been growing seasonal vegetables such as okra, tomatoes, ampalaya, and eggplant in front of their house for the past few years. 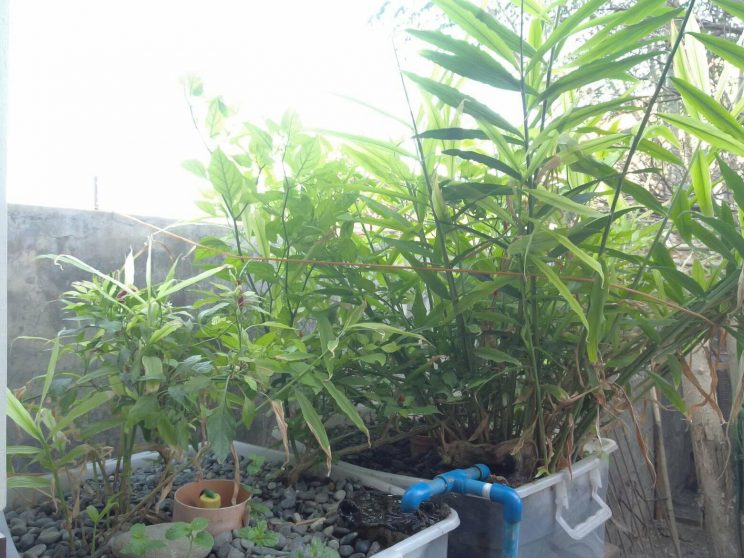 Before they started raising chickens, the couple dabbled in aquaponics and backyard vegetable gardening.

Presently, the couple is also growing a few fruit bearing trees such as atis, papaya, langka, chico, and mulberry along with several oyster mushroom fruiting bags, and a few vegetables–all for their own consumption. 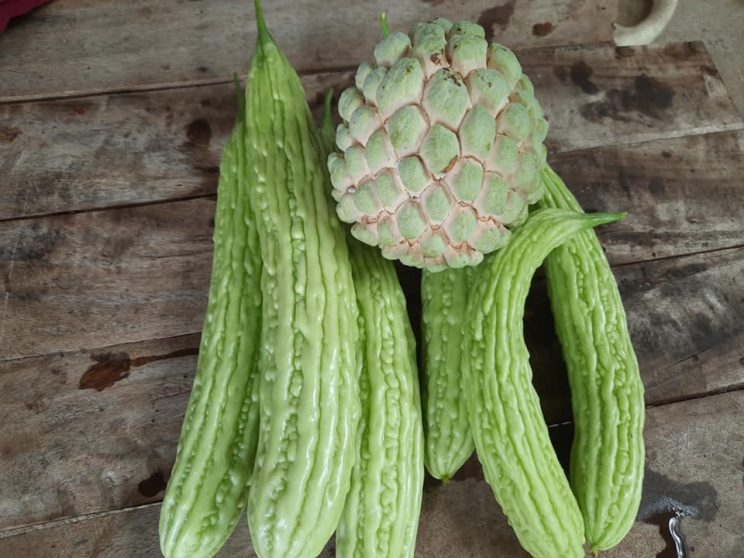 Ampalaya and atis harvested from their garden.

“When our chickens started laying, we found out that raising chickens is more productive than our aquaponics. When we expanded our chicken coop, we decided that our aquaponics setup had to go,” Christopher said.

He added, however, that they were hesitant to start their venture since there used to be a poultry farm located near their house that raised houses for their meat-type chickens. It used to cause problems such as surrounding areas being swamped with odor and flies. The farm eventually transferred their operations after the locals petitioned for its removal.

Still, the couple was determined to try chicken farming but this time, they would be mindful about the health and environmental risks that it poses.

“We decided to acquire a few stocks just to try it. Part of our own research is how to manage their housing and their waste. We learned of the deep litter method by using rice hulls. We also learned that spraying probiotics in their beddings help microorganisms aid in composting waste material. Moreover, their poop smells less when probiotics was introduced in their drinking water,” Christopher said.

Christopher and Hapi are employed as an Information Technology Officer of a government agency currently stationed in Quezon City and a private high school teacher based in Dagupan City, respectively. They both graduated from the University of the Philippines College of Baguio.

The IT officer said they had no formal education nor experience in chicken farming. However, his childhood was incomplete without native chickens roaming freely in their yard.

“I guess that was my best background and exposure in chicken husbandry. All I did was give them food everyday. I had no prior exposure or experience in scientifically managing poultry,” he said.

Luckily, he found technology to be useful and full of useful literature on how to raise chickens. The Internet served as the couple’s main source of information on brooding techniques, proper feeds, vaccination programs, and anything related to chicken raising.

Christopher added that he also joined Facebook groups with like-minded people and learned from their experiences since there are many chicken farmers who readily share the methods that they use with their own flocks.

“Moreover, hard lessons were also learned during the course of our hands-on experience. When the chickens started getting sick and sometimes leading to losses. This just means that chickens need tender loving care, too, and we must be responsive to their needs. We cannot simply acquire chickens and then leave them to tend on their own. They have important needs, like food, shelter and interventions for their general health,” the IT officer said.

To equip themselves further, Christopher watched a free introductory training video in chicken management produced by Dr. Erwin Cruz of the Dominant Asia Pacific. The introductory seminar talks about a clearer perspective of the free-range poultry scenario in the Philippines.

He signed on to their succeeding seminars where he realized that it is really better to be well informed if he wanted to maximize his yield while being respectful to the environment, his neighbors, and the chickens themselves.

“Right now, we are engaging our two sons to help and learn to manage our small venture. They help feed the chickens, give them clean water, clean the incubators, and yes, even interface with customers,” Christopher said. 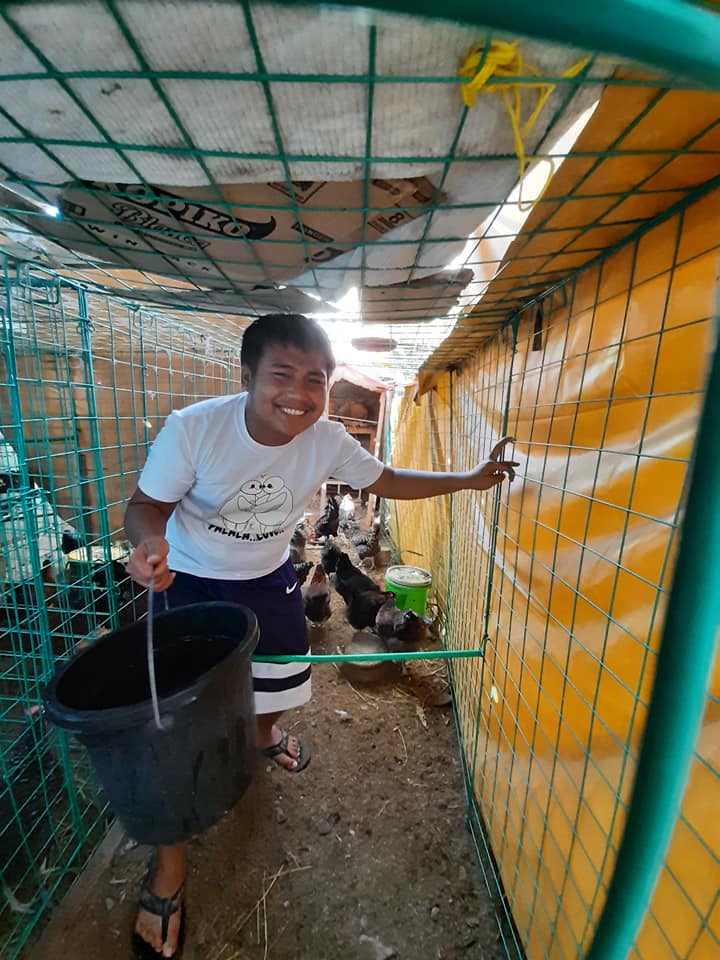 The couple’s son helping in their chicken raising venture.

The couple started with Plymouth Barred Rocks (PBRs) and continued to raise this variety, which now forms their main flock. Plymouth Barred Rocks are easily recognizable because of their black and white stripes that make them stand out from the flock. These are dual purpose chickens because they put on weight well for meat and they can also lay medium to large eggs. 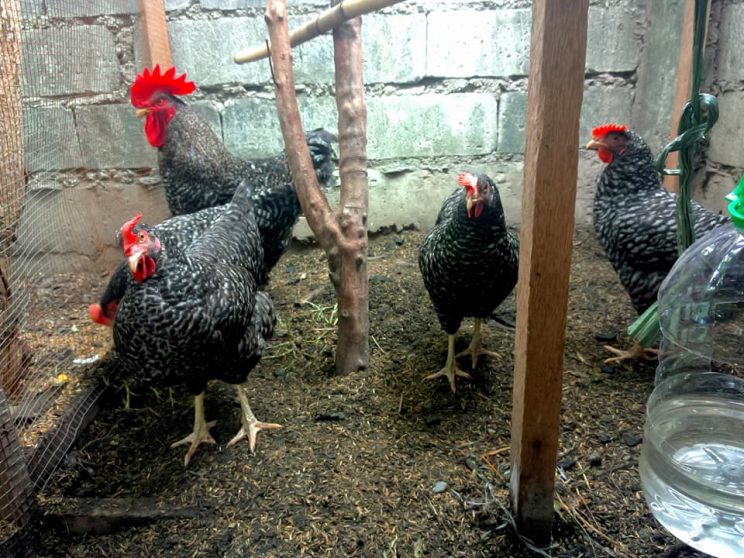 A photo of the original Barred Plymouth Rocks that the couple started with.

Aside from PBRs, the couple also breeds their own Black Stars. This chicken strain is also used for dual purposes but is known to be “egg-laying machines” because of their capacity as layers.

Black Stars are made by breeding two chicken strains.

“The Black Stars were bred by pairing male Rhode Island Reds and female Barred Plymouth Rocks. The Black Stars are our main layers in our coop for table eggs. We also acquired a few Black Australorps chicks as an addition to the flock because this breed are known to be great layers,” Christopher said.

He added that their recent acquisition is a batch of Dominant CZ D853 parent stocks from Dominant Asia Pacific. This breed of chickens are also used for both meat and egg production. 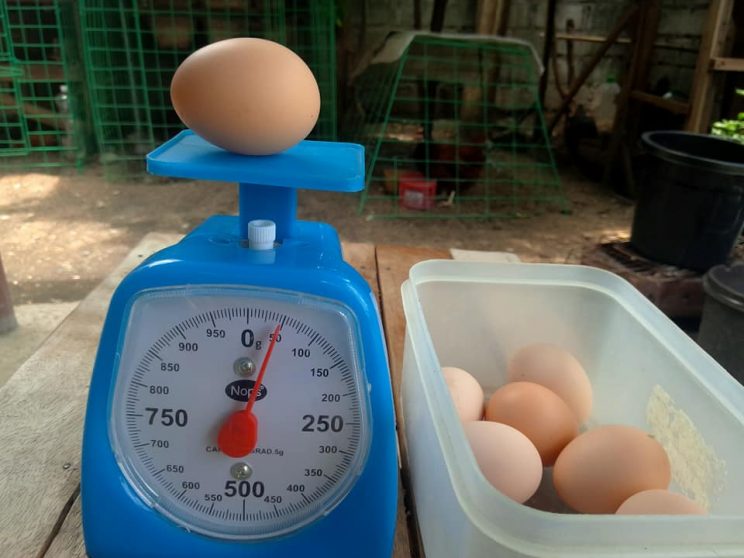 “These will help us aid small farmers in our province to start their own meat and layer programs for their household needs. We hope to focus on producing D853 F1s in the near future. But while waiting for them to lay eggs, we will continue operations with our current flock,” the IT officer said.

Although the couple invests in dual purpose chicken strains, they haven’t begun selling their chickens for meat purposes. Rather, they raise a small number of roosters for this purpose and harvest only what they need for their own personal consumption. 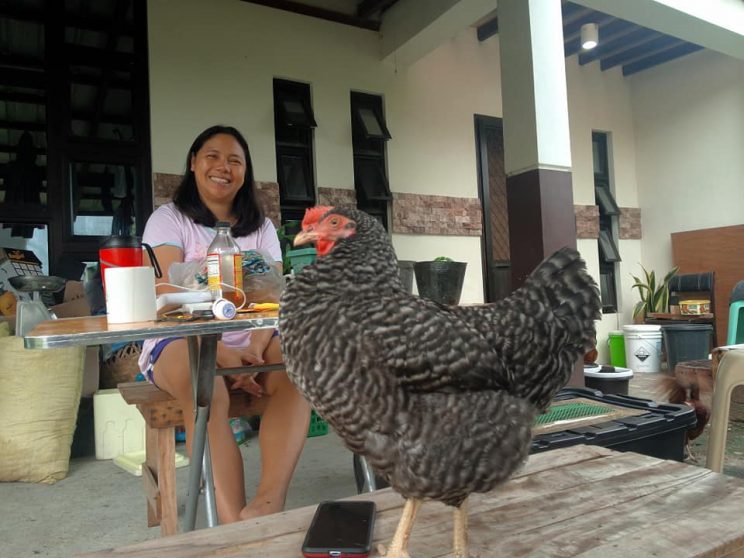 Hapi Domingo posing with a chicken. They keep a separate flock for their personal meat consumption.

Part 2 of this article will discuss the management practices that the couple implements in their urban chicken farm, the challenges they faced, and some tips on how to start your own chicken farm in an urban setting.

A couple invested in an urban chicken farm to foster food security and sustainability, part 2