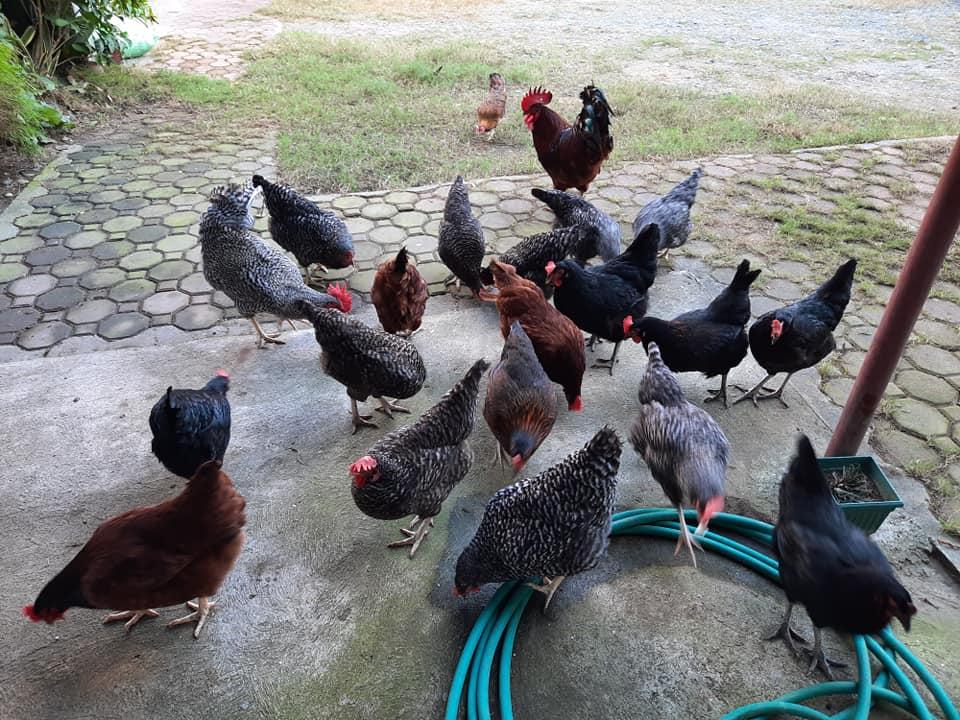 The chickens of Hapi Chickens Urban Farm located in Dagupan.

Hapi Chickens Urban Farm, as its name implies, is a household-based urban chicken farm in Dagupan run by Christopher and Hapi Domingo. They started the farm in hopes of creating a self-sustainable chicken meat and egg production initially for their household consumption.

In the previous part of the article, Christopher shares the history of their urban venture, how they learned to care for chickens, and the breeds that they use to fulfill their needs. Now, he talks about the management techniques that they practice, the hurdles they passed, and some tips on how to start an urban chicken farm.

Despite having little to no experience in chicken farming, Christopher, an Information Technology Officer of a government agency currently stationed in Quezon City, absorbed as much knowledge as he can about the trade through the Internet as well as seminars.

From there, he eventually learned how to properly manage their chickens to ensure productivity without having to worry about health and environmental risks which are inherent in conventional chicken farming. 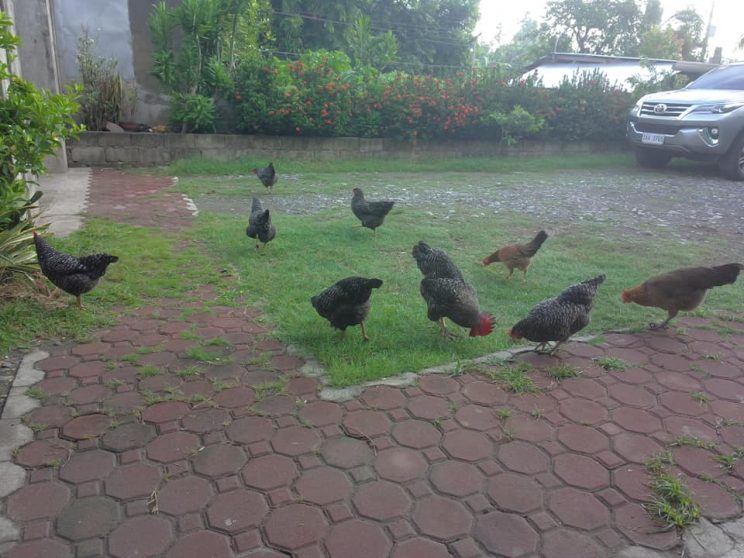 Every morning, the chickens have access to the couple’s yard for roaming and foraging.

“The requirements for our chickens are quite basic. Our chickens have access to our yard every weekend. We release our chickens in the morning so that they could forage grass and bathe under the sun. During the rainy season, we usually keep them inside their coops to protect them from the rains. We have installed tarpaulins around their coops to keep them out of the cold and winds, particularly at night. Chickens are quite susceptible to rapid changes in temperature, and can develop colds when not managed properly,” he said.

Christopher added that they make sure that the chickens are provided with vitamins and minerals that they require for continuous productivity. 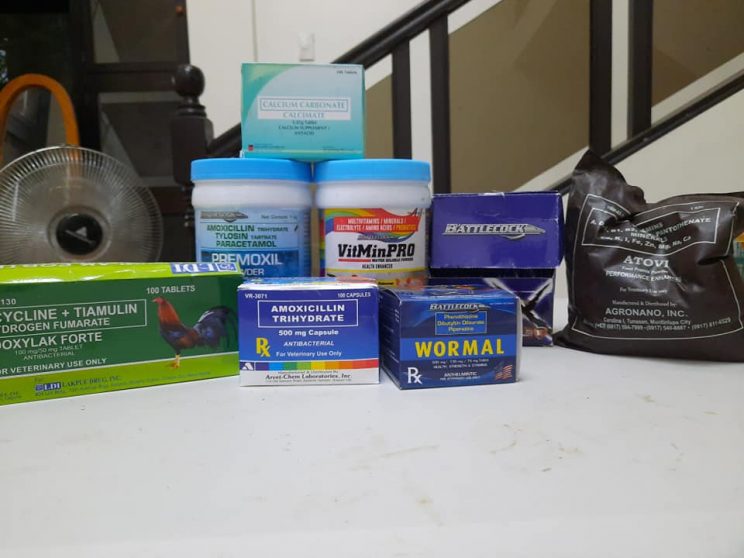 Vitamins and medicine are given to the chickens to secure their health and productivity.

“We also give them powdered egg shells as a source of calcium. They need calcium supplement every now and then. Indicators of calcium deficiency include soft-shelled eggs. Once in every month, we deworm our breeders and perform bacterial flushing. These ensure that their eggs will produce healthy chicks,” the IT officer said.

In the meantime, the farm’s hatchlings are brooded inside the couple’s house for around two weeks before being transferred to a brooder outside.

As for the chickens’ feed, Christopher said that they don’t sacrifice the quality of the food they provide. They give their flock commercial feeds as their main source of food but the chickens are also given grass and malunggay leaves as merienda or snacks.

“We [also] sprinkle food grade diatomaceous earth to their favorite place to dust bath since the earth helps in ridding them of mites,” Christopher said.

The proceeds of the couple’s venture of selling eggs and chickens for breeding allowed them to build better housings for their chickens and even a grow pen for their upcoming breeders.

A new opportunity to market their produce

During their chickens’ productive days, the couple usually harvests at least 15 medium to large brown eggs every day. This number is more than what their household needs so they sell the excess to their neighbors for P7 to P8 apiece. The revenue is used to fund the chicken feed. 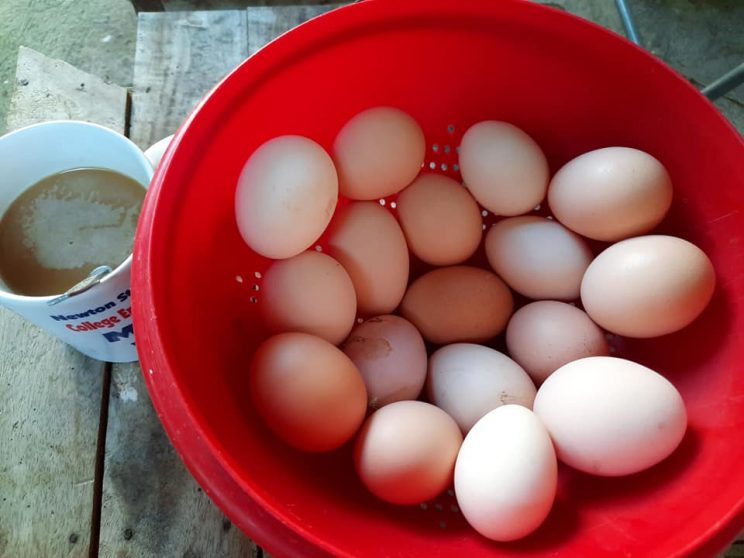 Excess eggs are sold to neighbors for P7 to P8 a piece.

However, due to the COVID-19 pandemic and nationwide imposition of quarantine protocols, Christopher and Hapi faced new opportunities as the public spent more time safely indoors.

“While many are becoming plantitos and plantitas, we observed that there are also more people engaging in small backyard poultry raising. We have been receiving inquiries via Facebook if we sell ready-to-lay chickens, chicks, or even fertile eggs! Prior to the pandemic, we usually hatch chicks based on our own needs. Now, we hatch chicks to help fill the gap of the demand for chickens, at least in Pangasinan,” Christopher said.

As their backyard poultry farm flourished with this chance, the couple invested in quality egg incubators acquired from VLD Egg Incubators. But before that, Christopher admitted that he made some do-it-yourself (DIY) incubators but the hatch rate was terrible and good eggs were wasted in the process. 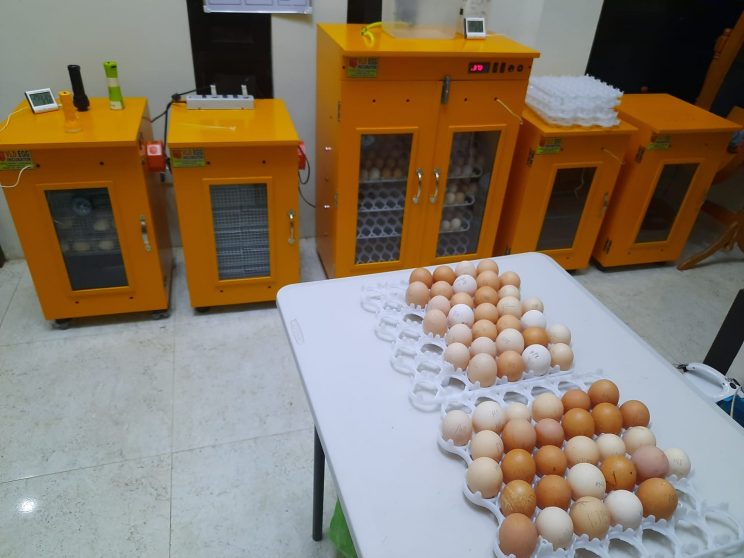 With the profits of their chicken raising venture, the couple managed to buy incubators.

Presently, the capacity of their newly acquired incubators is over 500 eggs for the setters which initiate the incubation process during the first 18 days of hatching and 400 eggs for the hatchers.

“We usually sell week-old Barred Plymouth Rock (BPR) chickens and mixed chicks. We absolutely inform people that the mixed breeds can be raised as egg layers and source of meat but are not advisable to be bred,” the IT officer said.

Moreover, the chicks are vaccinated against the NewCastle Disease (NCD) B1 type, B1 strain plus infectious bronchitis before being released to their new owners. 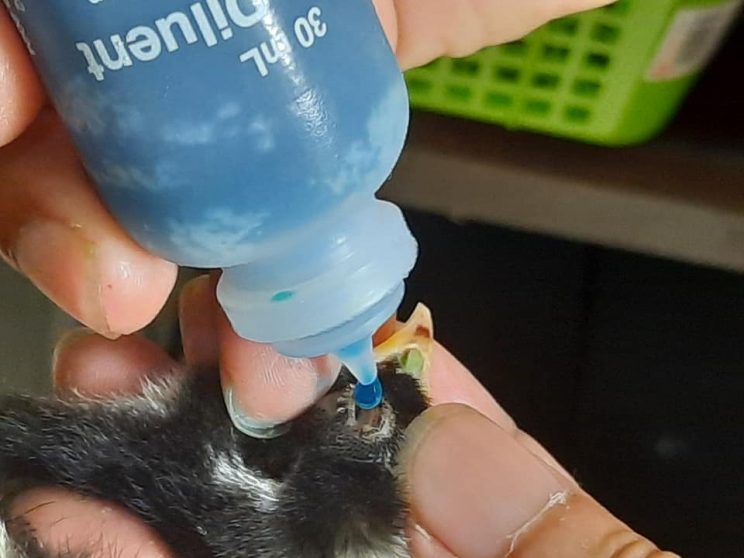 Before being released to their, the chicks are vaccinated against common yet lethal diseases.

BPR chicks are sold at P150 per head while mixed breed chicks are priced at P120 per head. The couple also accepts egg hatching services to those who are interested.

Fighting mortality to make the most of their flock

Aside from worrying about the health and environmental risks that come with raising chickens, another great challenge for the couple is securing their flock against high mortality rates by managing diseases.

“From our experiences, we found out that dirty water is one major culprit in making our chickens sick. Now, we ensure that their drinking containers are cleaned everyday and they are given clean drinking water. We add probiotics to aid in their digestion,” Christopher said.

Another thing that the couple realized when breeding a specific breed of chickens is that once in a while, they hatch eggs with a different color. This means that some of the chickens they acquired are not really pure breeds.

“This is actually one of the dilemmas that novice chicken raisers should be wary of when acquiring stocks for breeding. There are sellers that are not really honest about their products,” the IT officer said.

Having realized this, the couple decided to acquire breeder stocks or parent stocks from Dominant Asia Pacific.

“We believe that with these stocks, we do not have to worry about the quality of their offspring or F1. The offspring are expected to meet quality standards in terms of egg and meat production and will ensure the return of investment and more. We are expecting to release F1 by February or March next year to veteran and upcoming farmers in Pangasinan,” Christopher said.

Tips on how to start an urban chicken farm

Although chicken farming is usually assumed to be fit for rural settings, the couple believes that the venture can be done in urban areas that are blessed with a yard or a similar space. 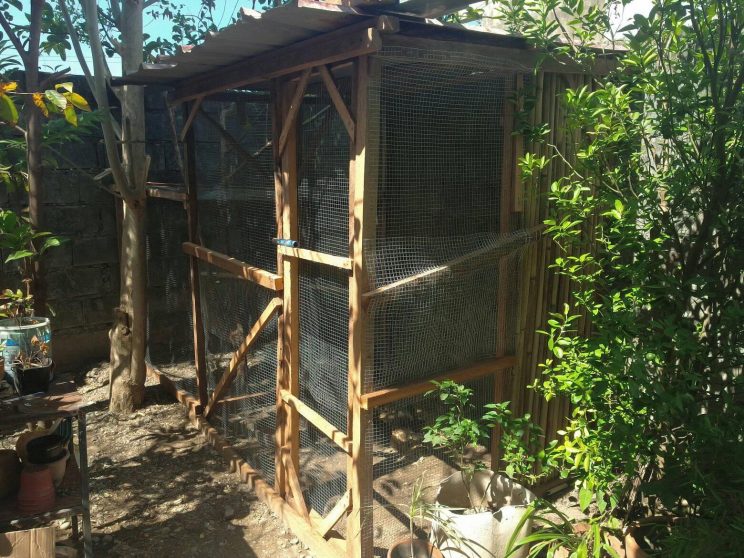 “If your place has a small yard, you may fit in about five layer type chickens. No rooster is required if you plant to harvest eggs for consumption,” Christopher said.

He explained that five chickens can give an average of three to four eggs a day. However, these hens require about 100 to 120 grams of commercial feed daily. Larger amounts of feed could result in fatter chickens and would tend to produce less eggs.

For the housing, a fly pen measuring three by five by five feet can be used provided that there’s an ample amount of rice hull as bedding and tarpaulins or similar materials as the roofing.

“Just make sure that the housing is located in a shaded area so that the chickens are not exposed to extreme heat during the day,” the IT officer said.

He added that the bedding can also serve as fertilizer to plants if there are any available in the area. This way, there would be no waste in the project.

With these basic requirements, a household living in the metro can raise their own small flock for their own consumption.

A couple invested in an urban chicken farm to foster food security and sustainability, part 1 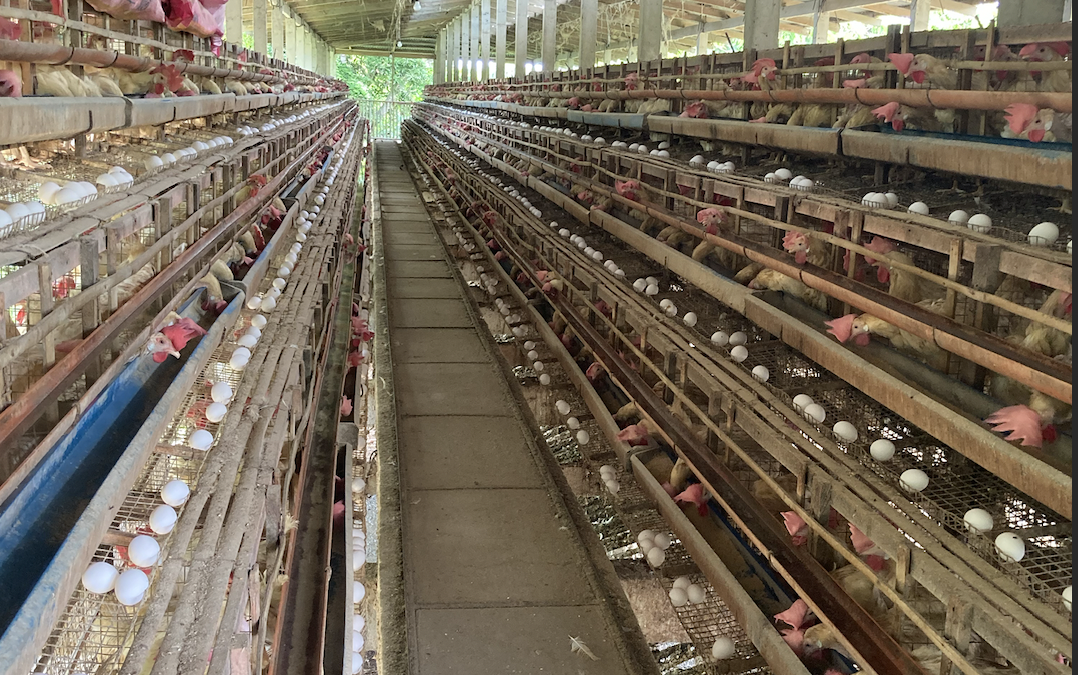 We must prioritize the environment now, before natural disasters get even worse