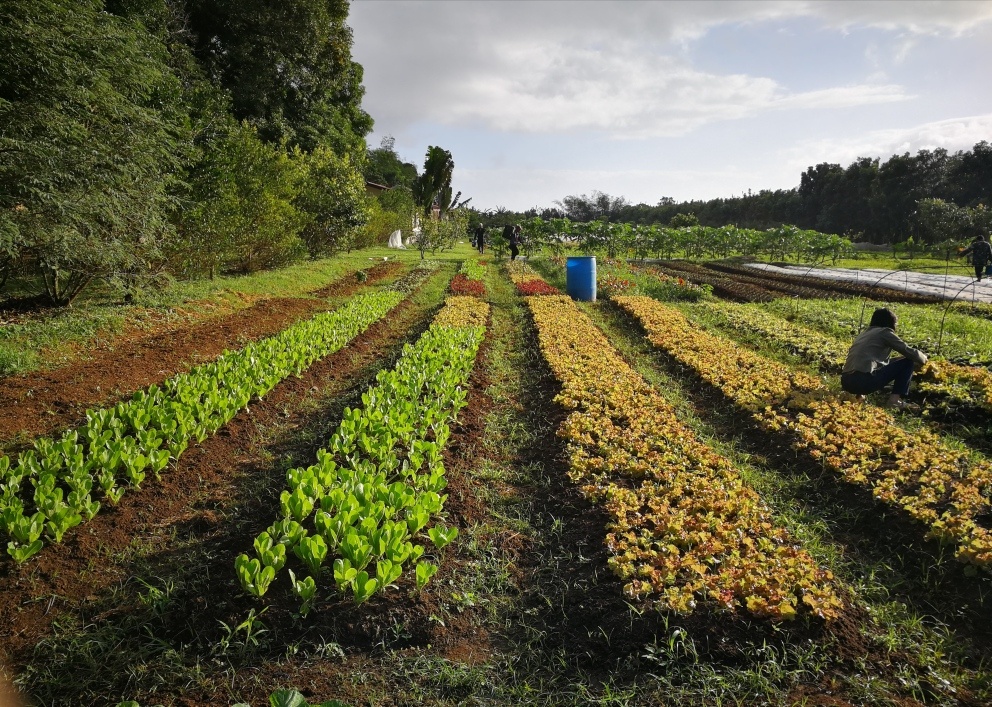 In the culinary industry, sourcing quality ingredients is equally important as the preparation of meals in the kitchen.

Knowing this, chefs Jay Angeles and his wife Ana Maria, 31 and 28 respectively, ventured into farming with the intent to cultivate their own produce that they can use for their food business.

Increasing the value of their food services

Naomi Natural Farms is a three-hectare farm situated in Tanauan, Batangas. As per the chefs, through farming, they had a wider understanding of the ingredients that they use. “What urged us to get involved in farming is the fact that by growing the vegetables that we use in our food businesses, it also adds value to our final products,” said Angeles. 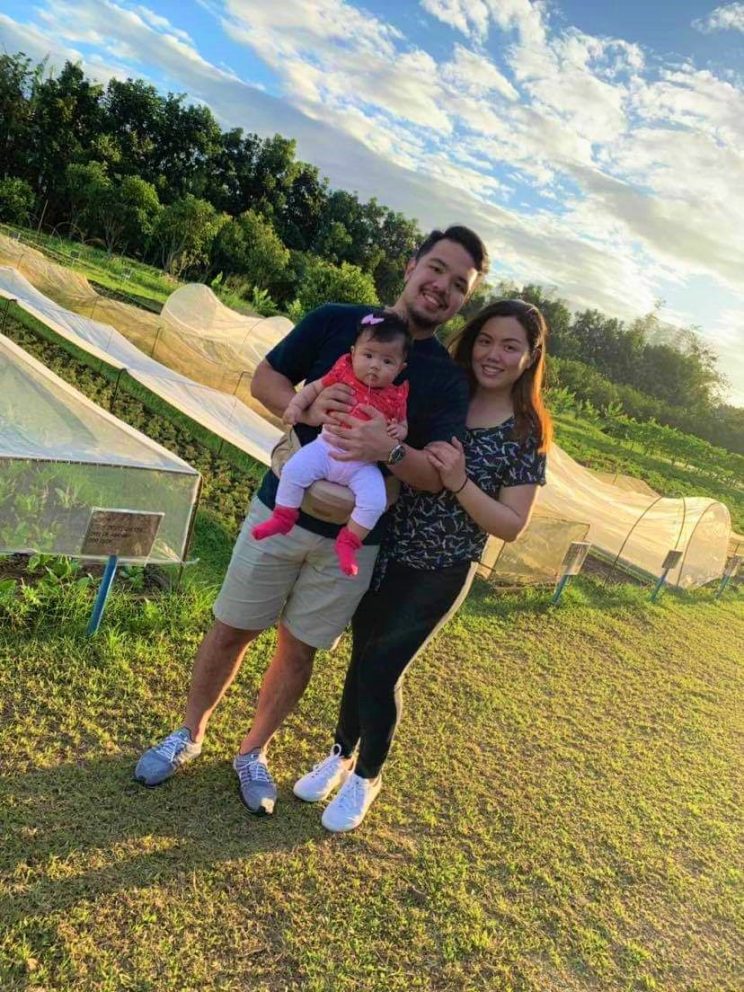 Jay Angeles with his wife Ana Maria and daughter Lucia Naomi, who they named the farm after.

Back in 2017, the couple got an offer from their parents to develop a property. They grabbed the opportunity to turn the lot into farmland, which they then envisioned to be the source of raw ingredients for their catering business. Three years later, the farm now supplies produce not only to their catering enterprise that mostly serves airlines and hospitals, but also to their newly launched cochinillo business. 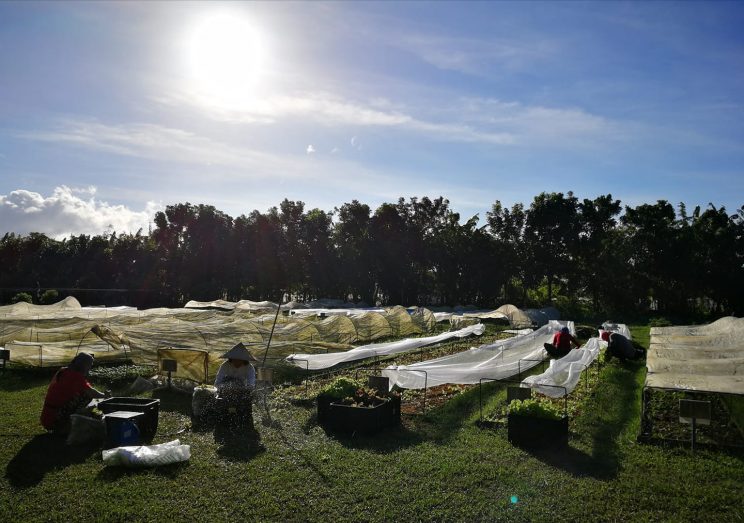 Before developing their three-hectare farm in Batangas, the millennial couple used to grow crops like herbs in a 200sqm backyard.

Angeles and his wife admitted that they began with no professional farming background. Despite this, they dedicated their time and effort in learning global agriculture through the internet, which resulted in the success of running the farm well.

Farm size, area’s climate, available market, and value of crops per season are some of the things that the couple took into account when they were deciding the crops that they’ll grow on the farm. 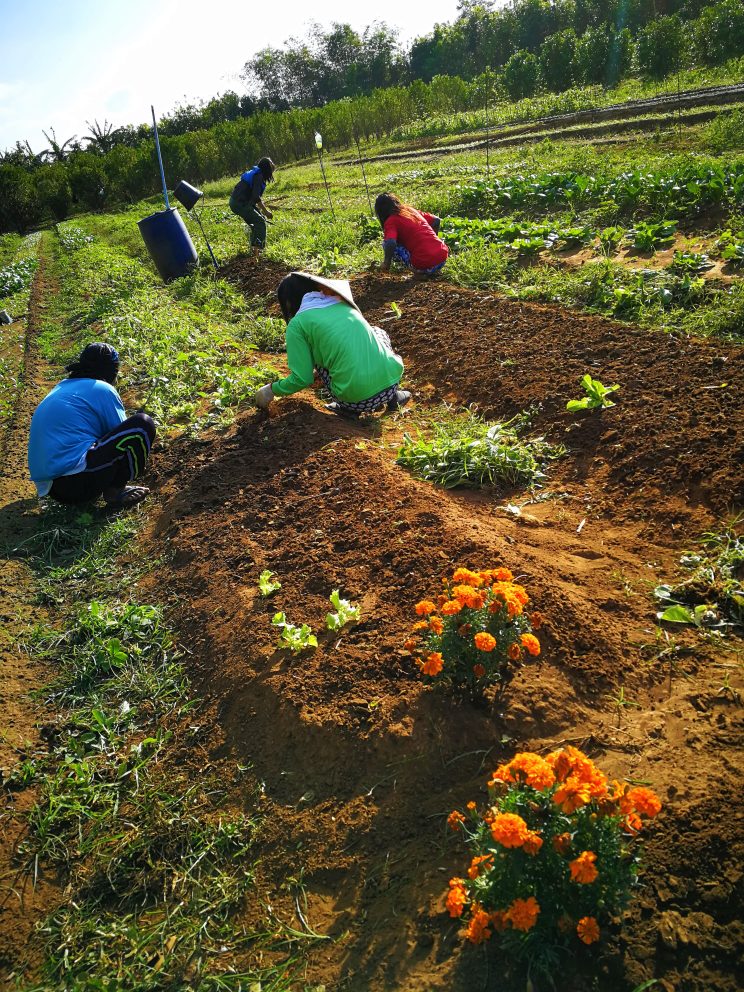 They plant marigold flowers and plants like lemongrass and citronella near the plots that serve as the farm’s insect and pest repellent. 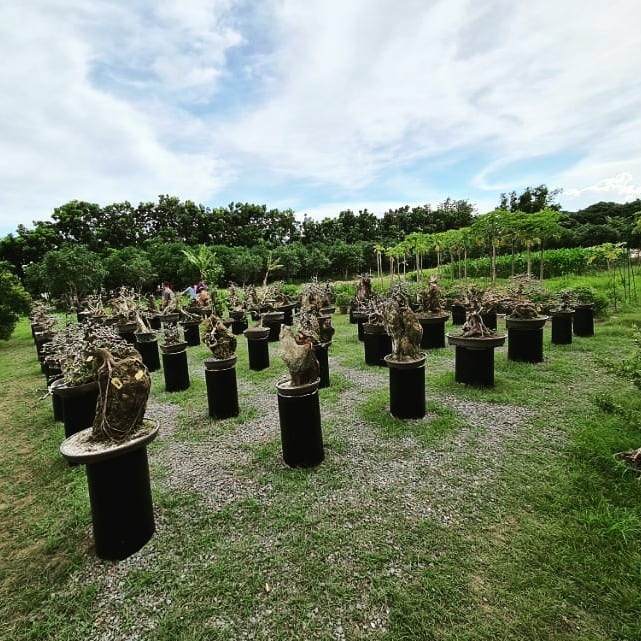 Angeles, an avid bonsai enthusiast, has allocated space for his bonsai trees and seedlings on the farm.

When it comes to watering the crops, they use natural water from a deep well by means of drip irrigation installed in all their plots. For their fertilizer, they use vermicast, fish amino acid, carbonized rice hull, dried chicken manure, and effective microorganisms which they make on the farm too. After every harvest, they let the soil recuperate for at least a week. That is also the time where they enrich the soil by applying the said inputs. “We always apply good agricultural practices on the farm. And although we are not yet certified organic, it is safe to say that we are transitioning to it, we always practice natural and sustainable farming,” said the chef. 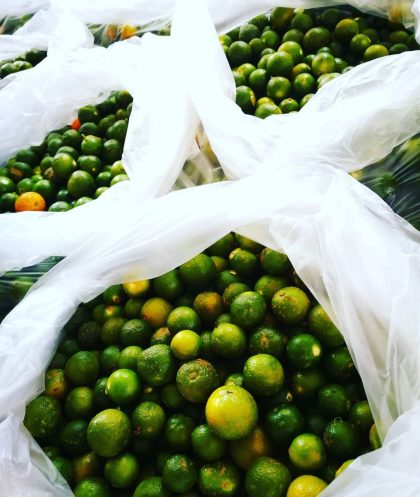 Calamansi that are grown the natural way. 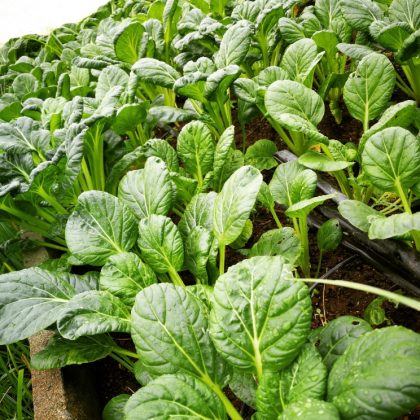 The farm mainly grows Asian herbs and leafy vegetables like this tatsoi or tat choy.

Each month, they harvest 1600kg to 2000kg of produce from over 20 kinds of crops. When fruit trees are in season, the amount of harvests intensifies too. Aside from regularly saving the farm’s produce for their food ventures, they also sell to other small to medium-sized businesses. In terms of pricing, their leafy greens and lettuce varieties are priced at around P150 to 250 per kilo, while herbs range from P250 to P750 per kilo, depending on the season and market demand. Moreover, they process some gathered crops into products like garlic chili sauce that costs P200 per 400g bottle. 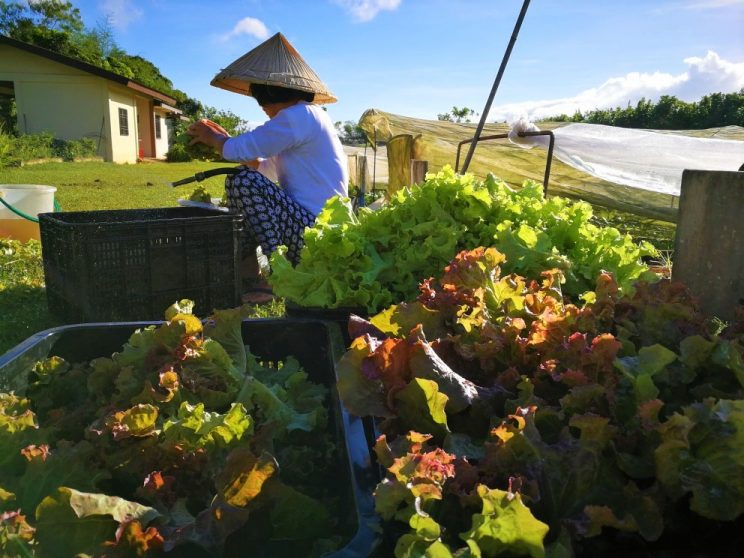 Two varieties of lettuce that they naturally grow are green ice and romaine.

Naomi Nature Farms is also home to several organic native black pigs. Currently, they have three males, six sows, and 12 piglets. In a few months, they are expecting to have more piglets from the pregnant sows.

In the morning, these pigs are fed with fresh soybean curds fermented in molasses and effective microorganisms, and in the afternoon, they nourish them with the farm’s vegetables and fruits such as banana, mango, and sweet potato.

From this, the farm also offers roasted suckling pigs through the new restaurant. The cochinillo or roast suckling pig is served with garlic annatto rice and pickled vegetables. One order is priced at P7,500 that is already good for 10 people. 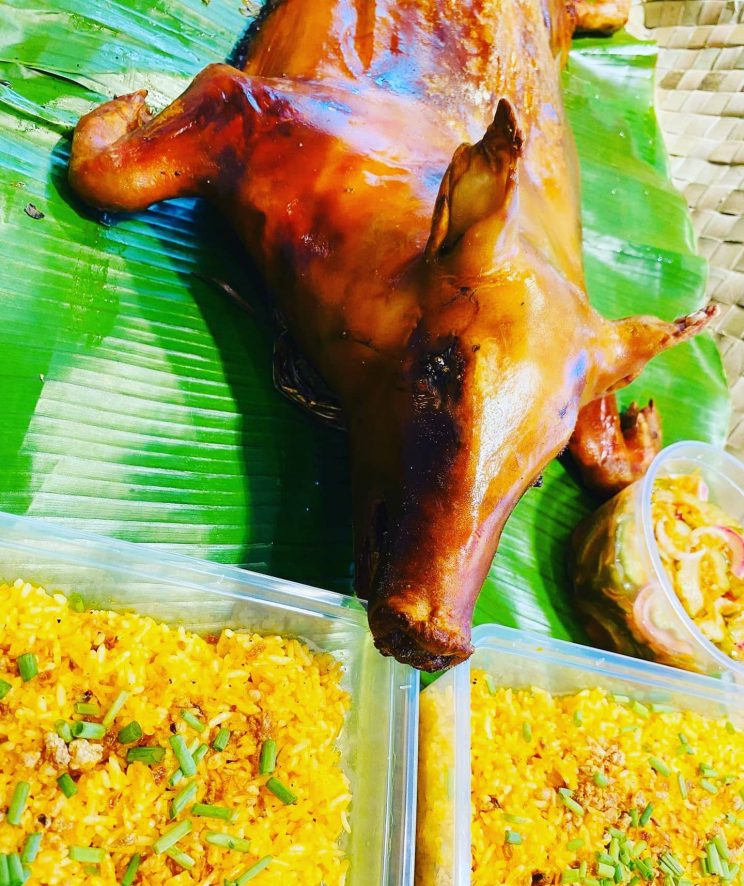 The couple’s startup restaurant, Cochinillo Luisito, which was also named after their son Luis Francisco, sells roasted suckling pigs for P7500 each.

Struggles of the present generation farmers

The start was never easy for this millennial couple. When they were starting out, one of their struggles was the generation gap between the local farmers. Since they have no background in farming compared to them, it was not simple to introduce crops that the farmers are not accustomed to planting like cilantro and Thai Basil, two crops that they normally use in their menu. The farmers have instilled beliefs and patterns in farming that they’ve already been practicing for a long time, which makes it more challenging for the couple. “We primarily had a hard time imparting our vision to the farmers who are so used to planting the common Bahay Kubo vegetables.”

This, however, didn’t stop them to convince the farmers in cultivating the unfamiliar crops and showed them its similarities to the more common vegetables that they know. “We worked with our farmers closely and we exposed them to several varieties of any given vegetable of the same family or species. From there, they realized that, for example, bok choy is similar to native pechay, and galangal is similar to our native ginger and so on,” Angeles explains. In the end, their persistence and dedication have led to major changes in their farming system.

From these obstacles, some of the things they learned are the importance of sticking with your goals and imparting the vision to the farmworkers and partners. For Angeles, it would be hard to implement change if the farm’s vision is not clearly shared with all the people that embody the farm. In their case, their vision is to build a sustainable and organic farming system, something that he and his wife have been working hand in hand with the workers.

Behind the farm are strong women

The majority of their farmhands come from the same area, who are also recognized by the townsfolk. The farm is mostly composed of middle-aged, strong-willed women that are all from Batangas. 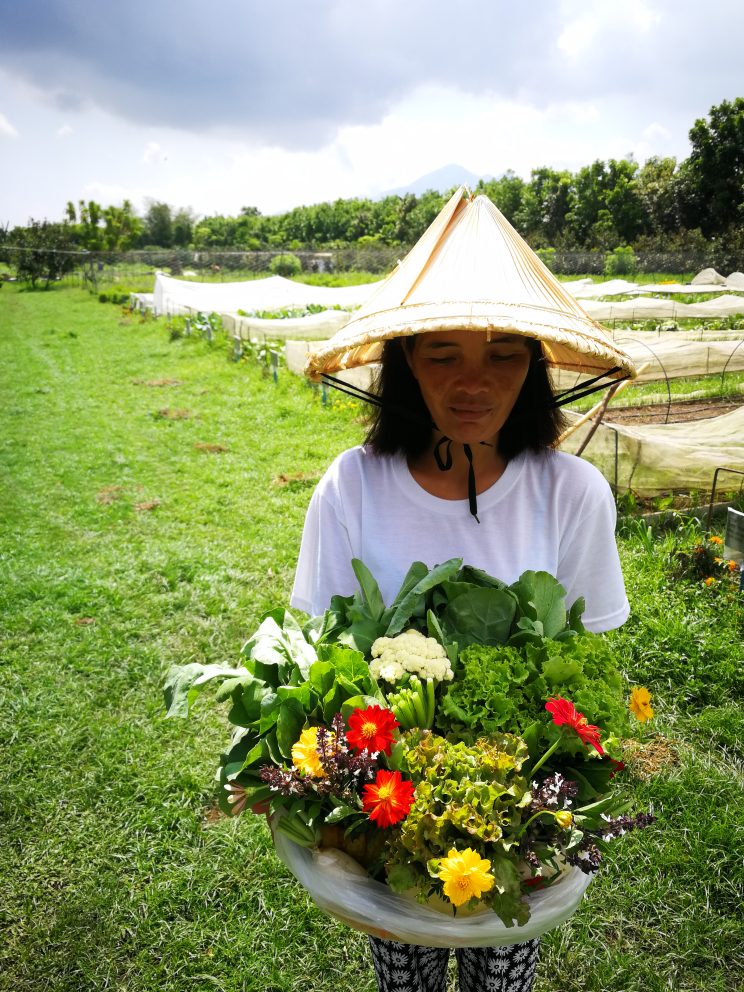 One of their women farmers holding a basket full of farm’s produce.

At first, they had two farm employees and now that the farm has gotten bigger, Naomi Nature Farm now employs a farm manager, 10 to 12 farmworkers, and security personnel. Most of the time, when the farm needs extra hands, they also prefer getting people from their farmworkers’ relatives and family members.

Rising from the ashes

Unfortunately, Naomi Natural Farms was one of the businesses that were stricken by the explosion of Taal Volcano last January. But after a few months, Angeles says, “Luckily, we were able to cope around three to 4 weeks after the Taal Volcano eruption, posted the status of the farm [after the ash fall] on social media, and now, fully recovered.” 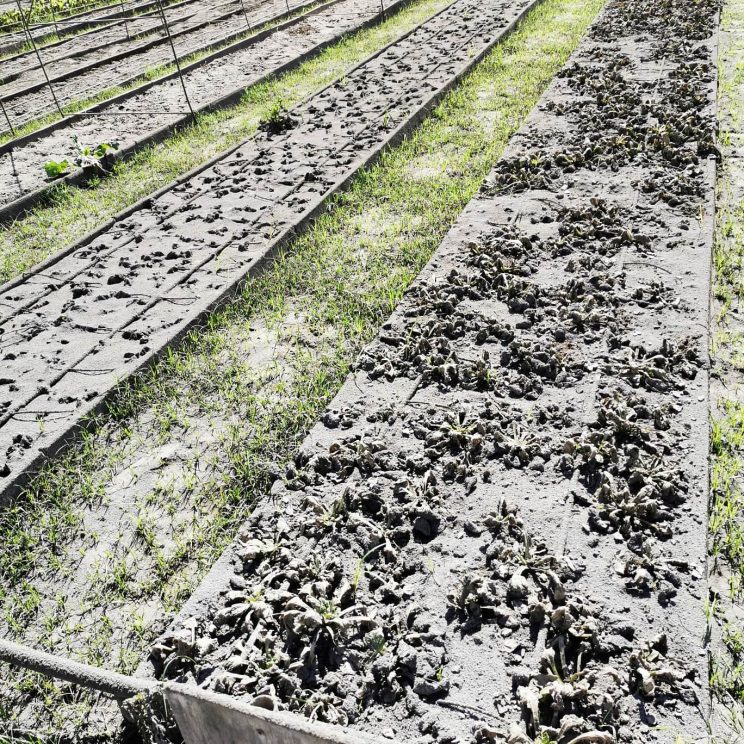 The aftermath of the Taal Volcano eruption.

In the midst of a pandemic, the farm is also faring well. Since the farm continues to be a private farm, there isn’t much difference with regards to their farm activities.

And because the demand for vegetables and crops significantly declined, the couple opted to donate about 250kg of produce to charities that feed front liners.

Despite the imposition of strict quarantine protocols in town, the couple has anticipated the limitation in transportation and people’s movement. They immediately secured the necessary permits and papers for their delivery trucks and for their farmers who do not stay on the farm. Amid the crisis, they feel at ease knowing that the farm continues to operate.

According to them, although it’s not an easy path, they aim to make the farm a certified organic agricultural site. Presently, they are working on adding a farm element, which is a private farm-to-table supper club featuring their recipes.

Things to consider before selling your farm products online