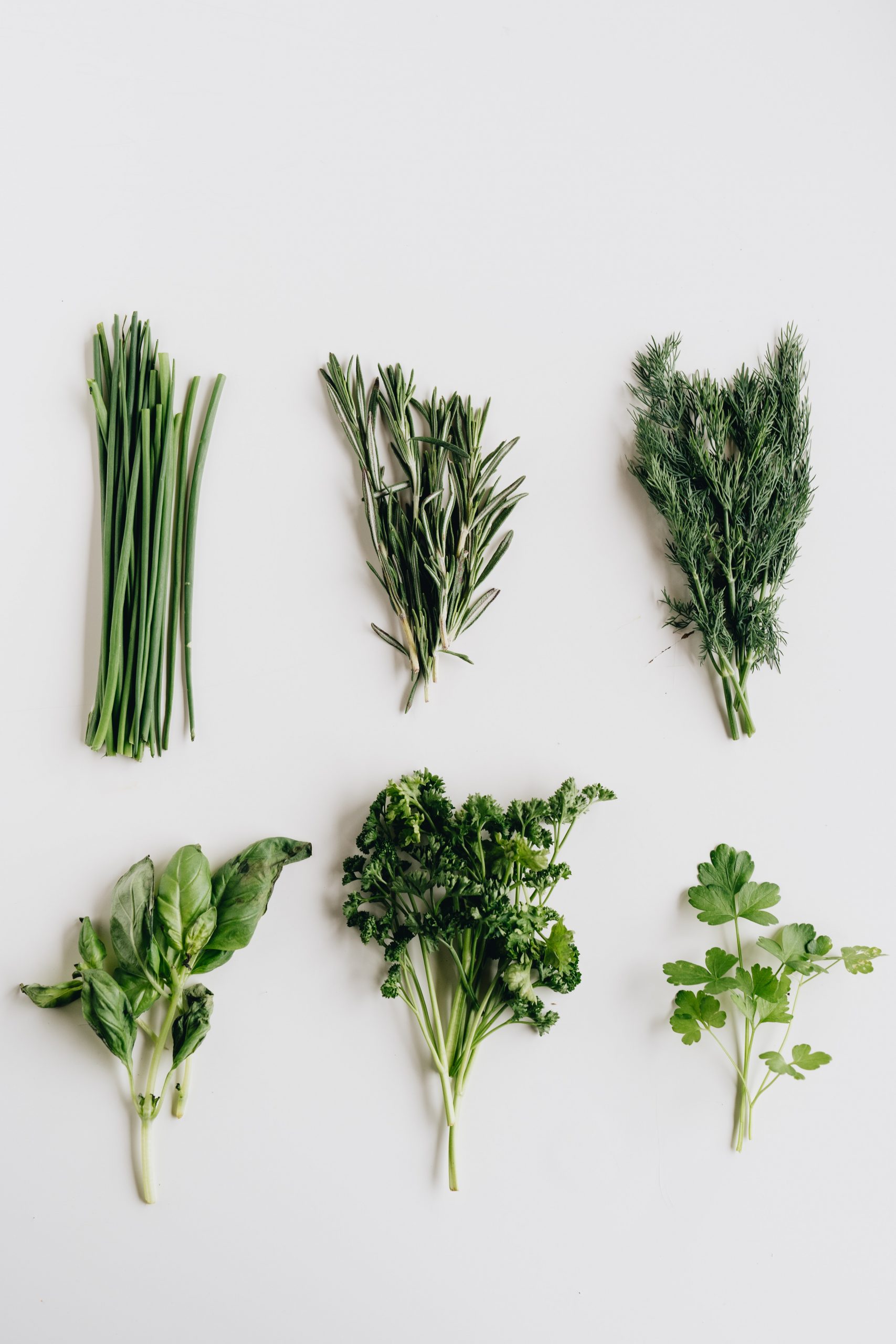 Featured photo by alleksana from Pexels.

Herbs, aside from personal consumption, can also be grown commercially not only because of their culinary and medicinal benefits, but because these are also profit-making plants due to high market demand.

From only growing the common vegetables for his personal consumption to learning and succeeding in cultivating herbs and spices, Carlo Aguilar, owner of an urban garden that provides fresh, homegrown, and all-natural herbs called Fresherb, shared his knowledge in herbs and spices during the third episode of AgriTalk 2020 that was aired on Facebook.

“Herbs are leaves, while spices come from other parts of the plant aside from leaves like seeds, fruits, and its roots,” said the gardener.

He added that herbs are plants that are used for flavoring and garnishing food due to their savory or aromatic properties. Oil extracted from herbs is also used for fragrances. Spices, on the other hand, are mainly used for flavoring or coloring of food that refers to the seeds, fruit, root, or bark of the plant.

While growing herbs and spices do not require a huge area for cultivation, the industry provides opportunities to growers both in the local and international setting. Here are seven herbs that you can cultivate and earn profit from:

Rosemary is a culinary herb that can grow up to one to two meters in height. This is commonly used for dishes like roasted chicken and is also recognized for its medicinal value. This can boost one’s memory, improve air quality, and can help in reducing stress and anxiety.

Rosemary is propagated through cuttings, but can also be grown from seeds. However, Aguilar said that there are only a few suppliers of rosemary seeds in the Philippines. That being said, it’s more convenient if you grow them via stem cuttings. This herb requires water every other day and must be placed in partial shade. 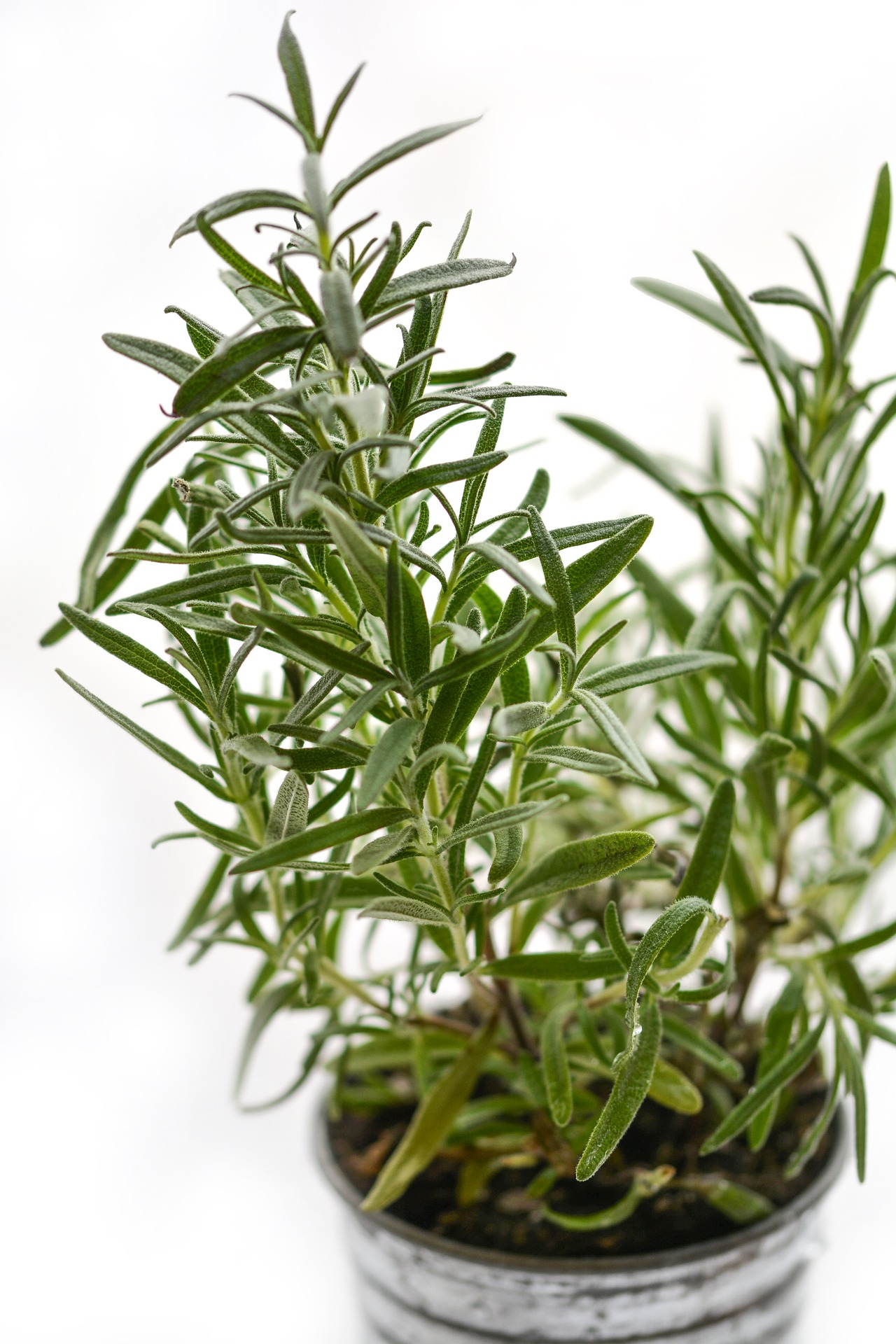 Rosemary. (Image by Monicore from Pixabay.)

In terms of fertilizer, Aguilar does not recommend applying synthetic fertilizers to herbs and prefers the use of animal manure-based natural fertilizer instead. Based on his experience, when it comes to pests, rosemary is usually attacked by black mites. If this occurs, make sure to get rid of black mites immediately to keep them from damaging the entire plant.

Thyme and rosemary are a popular duo in the culinary scene for it has been long used together as an ingredient in meat dishes and other meals. When it comes to its medicinal benefits, Thyme is a Mediterranean herb that can strengthen one’s immunity, fight cough and sore throat, and reduce high blood pressure.

But unlike rosemary, Thyme grows horizontally, hence the need to be placed in a wider container or area. If it gets too crowded due to a pot that’s too small, it can halt their growth. In Aguilar’s case, he sows them in the ground where thyme can freely grow.

It also demands full sun and daily watering. According to Aguilar, in tending this type of herb, you can rarely encounter pest problems, which is an advantage, especially if you are a beginner. 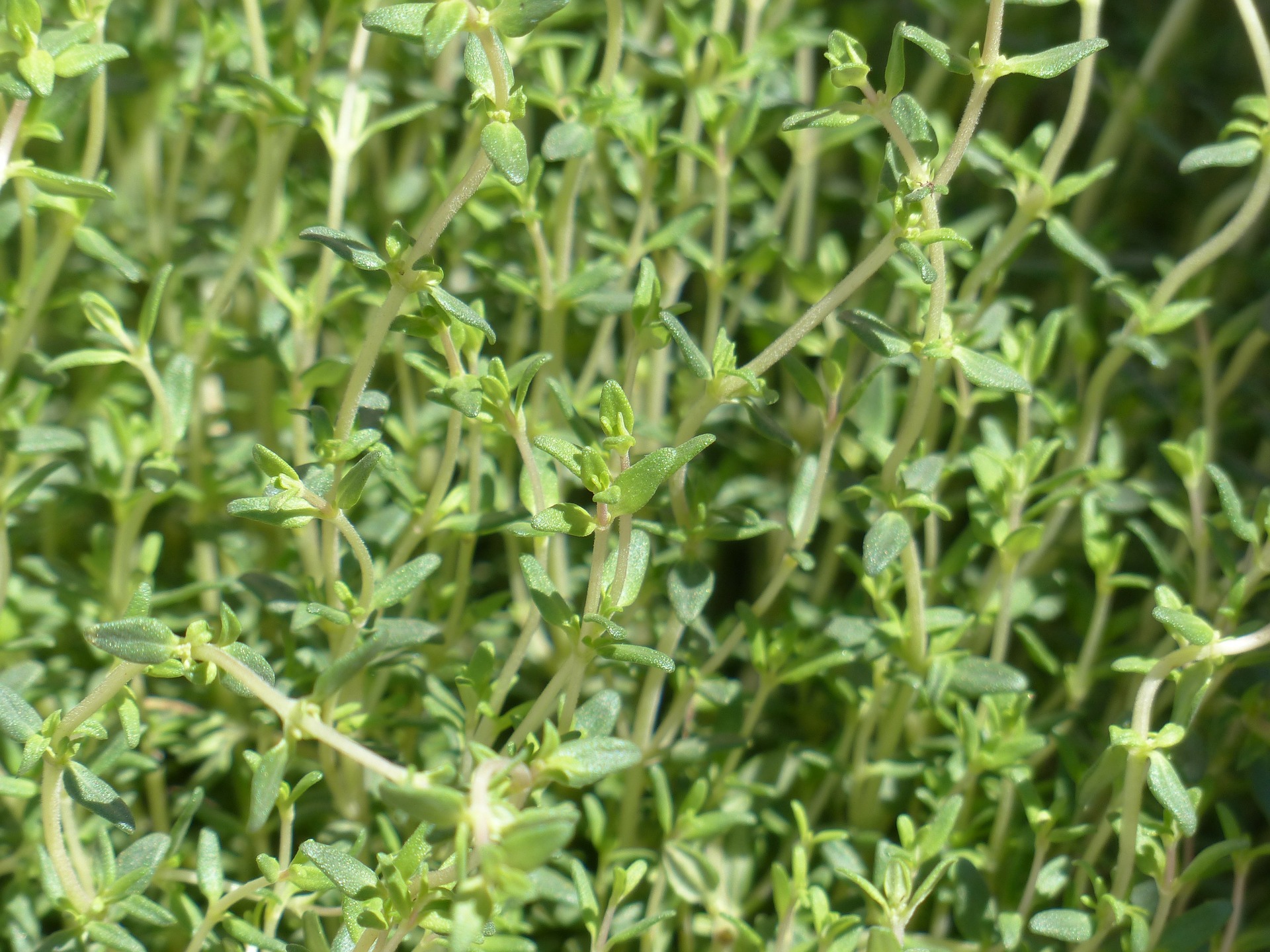 Mint, propagated through cuttings, must also be watered daily. This can tolerate full sun, but grows better if exposed to the sun for at least three to four hours daily. Mint can also be a hanging plant, but Aguilar warns that they must be maintained to avoid overcrowding.

Aside from its culinary purposes, this is widely used for its medicinal benefits that include reducing stress and anxiety. Mint tea is also an excellent remedy for indigestion. Different varieties of mint are peppermint, spearmint (Mentha spicata), chocolate mint (Mentha X piperita), and lemon mint (Monarda citriodora). 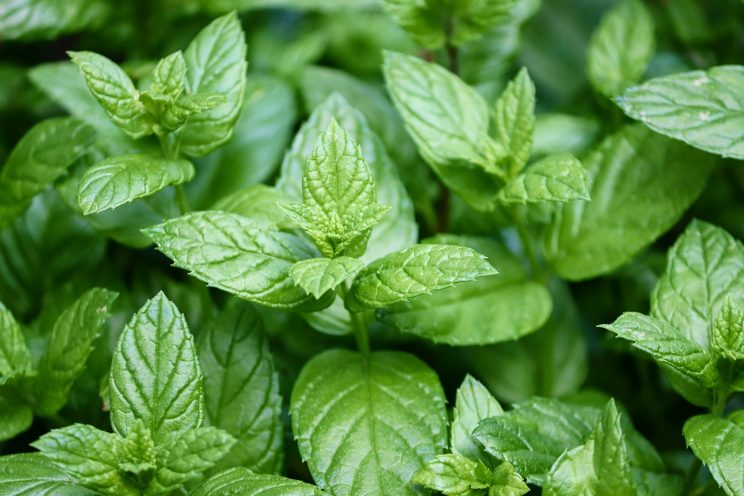 Peppermint, a popular mint variety that is commonly used in cooking. (Image by Manfred Richter from Pixabay.)

Parsley, another Mediterranean herb, can only be propagated through seeds. Once they are cut, you cannot regrow them through its cuttings. Parsley grows in vertical position and develops better through consistent pruning and harvesting. 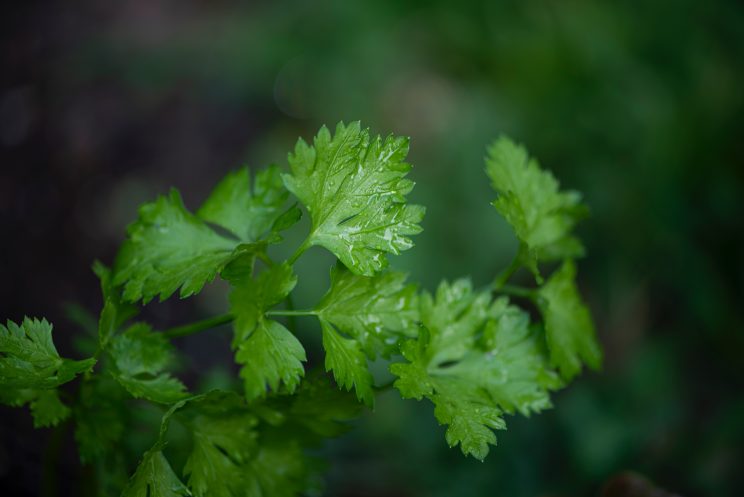 This is frequently used as a garnish to dishes like pasta as it offers a pop of color in an otherwise monochromatic dish. According to Aguilar, flat-leaf parsley is preferred by his chef clients because it’s more tasting as compared to the curly parsley that is normally used as a garnish, too. He added that this herb is a breath freshener, “This is the reason why parsley is garnished or added to meals, so that you can eat them after finishing your meal.”

Cilantro, a culinary herb, is an easy plant to tend, as per the gardener. Although when exposed to full sun, they can easily wither. Since its leaves are thin and soft, they do not tolerate heavy rainfall very well. But Aguilar says, “If you put them in soil (considering the right conditions), they’ll grow easily.”  This can be propagated through seeds that can take up to six to eight weeks for them to fully mature. There are different varieties of cilantro and for Aguilar, he prefers the culantro variety. In watering cilantro, it must be practiced daily too. 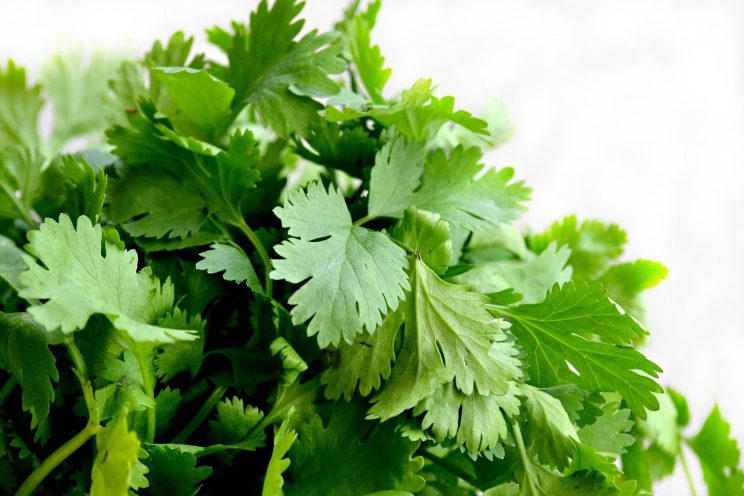 Its roots and leaves are used for cooking. Presently, cilantro is priced at P350 per kilo in the market. The demand for it becomes low after it has matured and developed flowers, Therefore, the gardener advises not to wait for its flowering stage before you harvest and sell them.

Sweet basil or great basil, is also an easy-to-grow herb. But Aguilar says, Thai basil is easier to nurture compared to the sweet basil as it is less susceptible to diseases and pests. 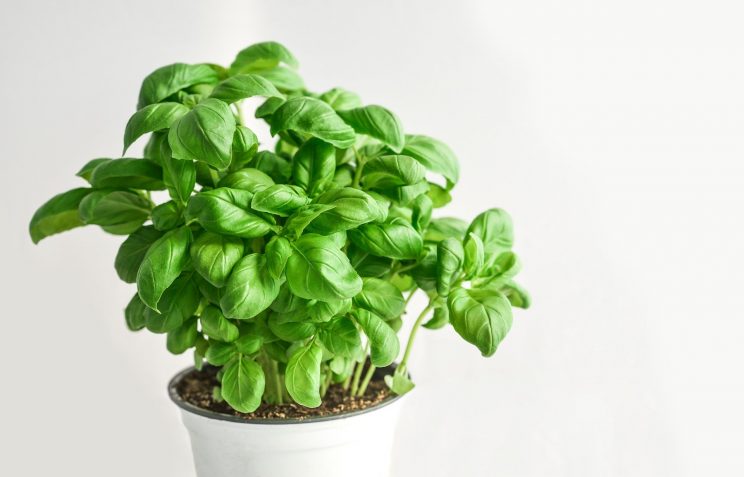 Basil. Image by monicore from Pixabay.

Basil is popular for its culinary purposes and is typically added to pesto. Basil can be grown all year round and thrives well if you propagate them through seeds rather than cuttings. Expose basil to the sun for about eight hours a day and regularly water them to produce quality leaves. When leaves curl, this might also mean that there are aphids present. If this happens, manually remove the pests or spray the plant with a pesticide of your choice.

Oregano can be grown through cuttings. This is a sun-loving herb that needs daily watering. The more common oregano with thick leaves is typically consumed as a tea for its medicinal properties that can soothe cough and sore throat. And there’s also Jamaican oregano, that is more often used for cooking. Oregano, apart from the medicinal and culinary gain that it can provide, its plant can also last for years. “I have oregano that it’s already five years since I planted them. Even after countless harvests, storms, and intense heat, they still thrive. I don’t even use fertilizers,” said Aguilar.

In propagating Jamaican oregano, in its mother plant, find where the green and brown side of the stem meets as this indicates where you will cut the stem. Plant the cutting into your container with a potting mix that is composed of 1:1 ratio of carbonized rice hull and vermicast. Put it in partial shade for one to two weeks and if it thrives, most likely, roots have already grown. For propagating the more common medicinal oregano through cuttings, cut the stem by counting the third node from the top, replant it in your container, wait for one to two weeks and check if it has developed roots. 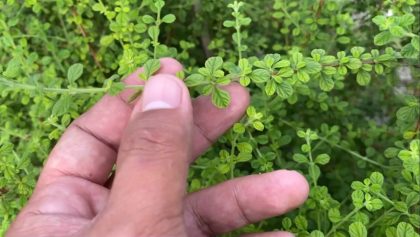 Look for the brown and green side that indicates the place where you will cut the stem for propagation. 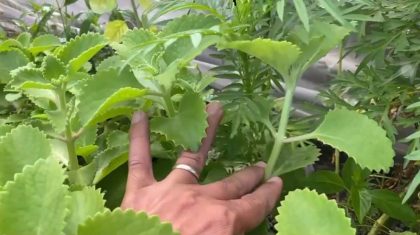 For cutting the medicinal oregano, make sure you cut them on the third node. (Photos screen captured from the webinar on herbs and spices.)

After nine years of gardening, this gardener would like to impart his insights and tips to any growers who would want to plant herbs and spices as well. Here are some of his techniques:

Most of the herbs are sun-loving, which is why gardeners must place them outdoors so they can acquire enough sunlight that is vital to their growth. But if you bought herbs from high-terrain areas like Baguio and you will continue tending them in an area with hot weather such as the metro, Aguilar suggests to let the herb acclimatize to the new environment first. “Let the plant adjust to the climate you have at home by placing them in partial shade for at least one to two weeks before exposing to full sun.”

Secondly, in terms of maintenance, cutting some of the herbs’ branches (except for cilantro) weekly is great as it promotes growth and enables the herbs to produce more branches.

Many herbs, excluding sweet basil, rosemary, and sage, are pest-resistant. If there’s any presence of pests, Aguilar says that you can apply mild pesticides to get rid of them.

For any growth of flowers in your herbs, cut them right away, otherwise, the plant’s flavors will start to deteriorate. As per the gardener, the flowers are indicators that the plant is ready to produce new seeds and die.

These are just some of the herbs and spices that can provide a stable income to many. Aguilar, a former corporate worker who is now a full-time farmer, shares in his previous interview with Agriculture Monthly, that through urban agriculture, he earns the same profit that he used to receive as an employee, while pursuing his passion for farming.

Watch the full video of the webinar:

How soil in your garden can increase happiness