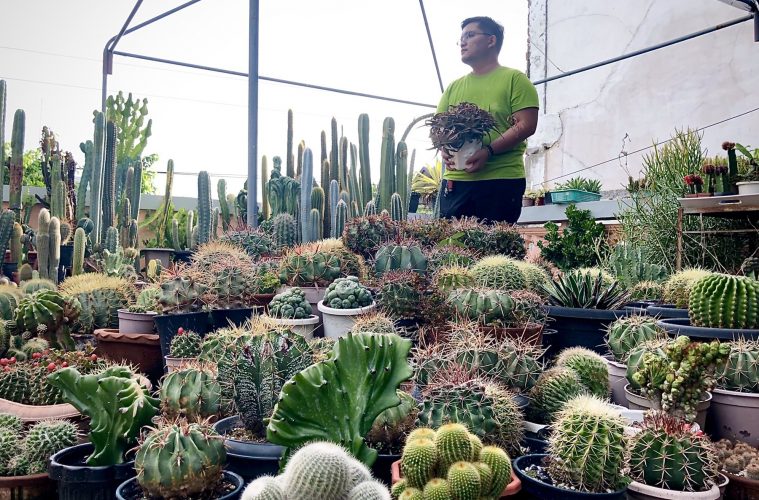 Many people practice gardening not only as a hobby, but as a form of therapy, too. This is the same rationale of Adrian Vincent Alipio, 31, a medical doctor and diplomate of Philippine College of Physicians, who started tending plants in 2015 to pursue a therapeutic hobby.

“Life in the medical field is quite challenging and it was taking its toll on my mental and physical health,” said Alipio. While having his Internal Medicine residency training in Baguio, Alipio was diagnosed with dysthymia or persistent depressive disorder. He sought psychiatric help and was advised to take antidepressants. But with the medication costs in mind, he asked his psychiatrist for a less expensive method. “I was advised to look within me; what hobbies I would want to see myself into,” said Alipio.

While walking along the Session Road, he came across a shop where succulents are priced from P10 to P50. And that’s when his interest in growing plants sparked, particularly for cactus and succulents (CNS). His first plants include haworthias and other common succulents that belong to the echeveria and stonecrop (sedum) genera.

Although the smell of dried pine and organic materials made him feel calm, he decided to quit his residency training and move back to Ilocos, his hometown, to find himself. “I had to do it to preserve myself and continue my dream while being close to my family,” he said. As he returned home, he also brought 30 kinds of succulents, which he struggled to tend due to their region’s warm weather that contrasts with the climate in Benguet where he bought the plants. Considering the weather condition in Ilocos, a fellow collector suggested for him to invest more in cacti, which he did, buying about three thousand worth of plants from the said collector. He continued purchasing plants until he filled their terrace with varying kinds of cacti and succulents. 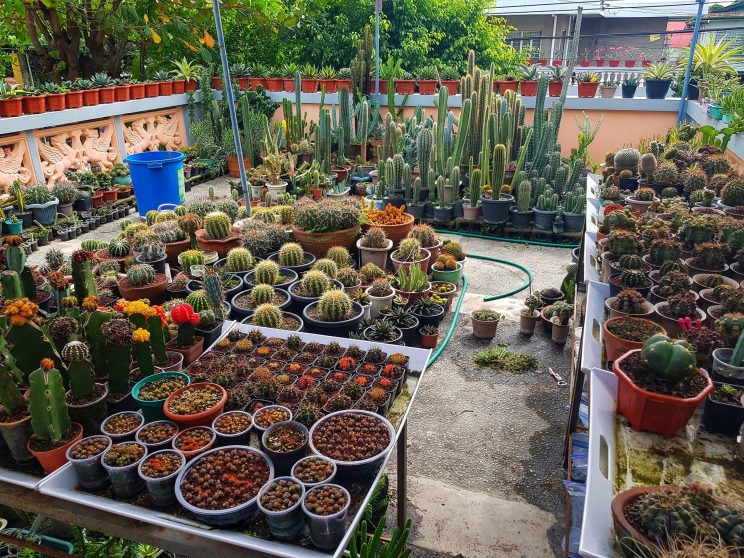 This doctor’s growing space is found in Laoag City, Ilocos Norte, where he keeps beyond 50 species of cacti and over 5,000 plants in total.

His first three years in gardening were difficult. He started by growing about 30 to 45 cacti, but he admitted that these overwhelmed him as a newbie gardener. It demanded a lot of his time to further read about their diverse plant requirements. He also shared that he almost collected all of the unusual, hard to find plants like Turk’s cap cactus (melocactus) and Persian carpet flower (edithcolea grandis) clones just to satisfy his eagerness to obtain them. Later on, he learned, “It took me almost three years before I realized that I had what I wanted for an aroid garden. Now, I’m only adding some plants [to my garden].”

An aroid garden refers to a tropical growing space with plants like philodendrons and caladiums, while an arid garden is a dry space where hardy plants like cactus and succulents are placed. Presently, this doctor-gardener owns over 2000 arid plants and about a hundred aroid plants in his garden.

Alipio mainly tends barrel and columnar cacti species. He keeps his plant collection in their 70 to 100sqm terrace at home. He currently cultivates over 25 different types of ferocactus barrel cactus like fish hook barrel (Ferocactus wislizeni) and around 35 columnar genera such as tree cactus (pilosocereus), that according to Alipio, “are boldly studded with fierce spines.”

This gardener is also fascinated with cactus gardens in Australia and Europe that only entails minimal care during winter, and yet, thrives well. He sees this as an inspiration for his garden saying, “Mine is patterned that way and I see better results in my selection of plants.” 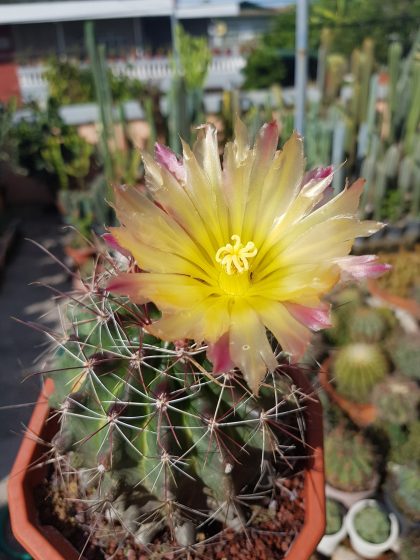 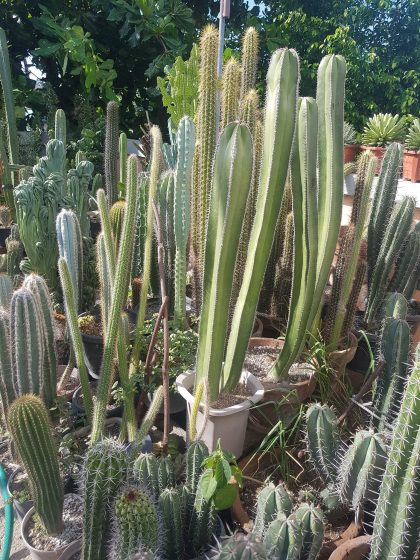 Different species of columnar cacti in his garden.

Nowadays, he has been sowing seeds that he bought in and outside the country. “I see good responses about my garden. I actually sell some whenever I think I have too much to take care of. They are quite resilient to drought and full blast of sun exposure and rain.” He adds that while barrel and columnar species are forgiving and easy to grow, other varieties, on the other hand, are more susceptible to sunburn like haworthias.

Other than CNS, he recently began producing fruit trees like marang, jackfruit, mulberry, and chico due to the public’s surge of interest in plant cultivation during the quarantine period.

Propagation of his plants are either by seeds, pups, or division. Alipio also does grafting. For his soil mix, it’s composed of 70% pumice,  20% carbonated rice hull, and 10% of grit or garden soil. He noted, “Pumice is my main choice when cultivating cacti and succulents as it promotes good aeration and prevents [root] rot.”

He normally waters his plants every day or every other day, depending on the weather. After five years of nurturing plants, he got the hang of watering and knowing if his plants need water by just looking and touching the soil. His watering schedule occurs around four to six in the morning or 10 to 12 in the evening. 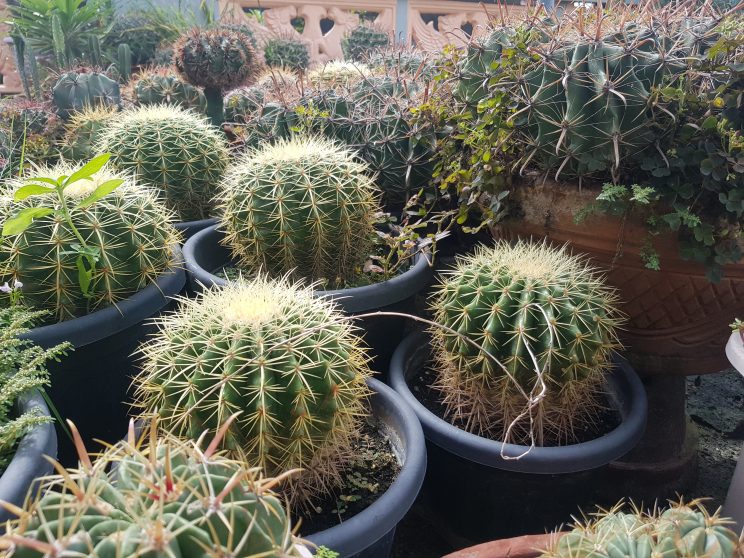 Some of the golden barrel cacti (Echinocactus grusonii)

He adds that enriching the cactus and succulents with fertilizer varies. In his case, he applies control-release fertilizers every four to six months as well as organic fertilizers like vermicast and fish amino acid during summer when the growth of his plants are active.

Growing for collection and selling

Aside from collecting plants, he also puts some of them on sale, which he markets both online and offline. “I sell sometimes. I sell when I think I have enough specimens of the same species, but only sparingly,” he explained. While most of his plants are for collection, he also allows guests from nearby areas to visit his garden. This way, he can personally teach them the proper care of the plant that they aim to grow.

By occasionally selling his plants, he notes that one transaction could go as high as P25,000. The money that he earns from this goes to his budget for planting materials and new plant species.

An Euphorbia platyclada or also called a ‘dead plant’.

His difficulties in tending the plants

Although he still encounters issues like root rot, he always puts them down to experience. Looking back, Alipio recalls three main problems ever since he started. The main challenge during the initial phase of his plant journey was loss in patience. “Cacti and succulents grow slowly and one could lose interest in taking care of them.” But this didn’t hinder him and pushed him to keep moving forward, which led to the abundance of his garden today. Maintenance is another factor that slowed down his progress. He expounds that maintenance, especially the application of fertilizer, insecticides, and fungicides, was a struggle for him provided that he works as a full-time doctor while maintaining his garden on the side. “My time as a doctor while being a gardener is divided. But since I have learned time management, I usually fix major flaws in the garden during weekends and I wake up at four in the morning during weekdays just to be able to tend to them. All other times are devoted for patient care and medical reviews.” 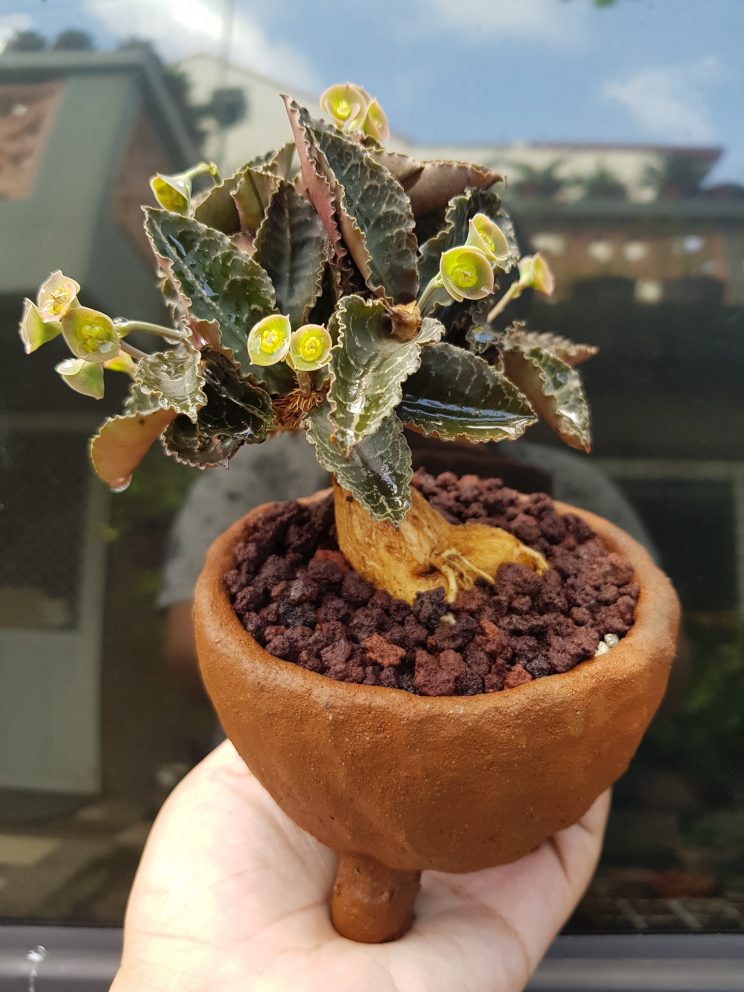 An Euphorbia francoisii plant that the grower named Kurumi.

In several years, he sees his garden to turn into a green space that requires less attention. By the time it comes, he expects that his plants have already adjusted to their environment. This will eventually be a source of seedlings for novice plant lovers that produces enough inputs not only for him, but also for the public to enjoy and tend. Alipio says, “I would want to still focus on big cactuses and make a seed bank from those mother plants that I have. I want to maintain this garden so there will be no need for us to import plants, which are costly and difficult to obtain.”

Alipio adds that with the high demand for plants today, this results in the escalating, unreasonable prices too. Hence, it is important for gardeners, especially the newbies, to be aware and be safe from overpaying their plants. Browse selling groups and compare the prices to save your time, effort, and money. “Don’t rush for a very controversial ‘rare’ plant as the trend continues to change over time. Rarity is very relative.” As per him, what is an unusual plant now could be a common variety in a short period of time. Most importantly, he suggests fellow gardeners to follow what their heart desires and to pursue what makes them happy in gardening, which Alipio did when he started out.