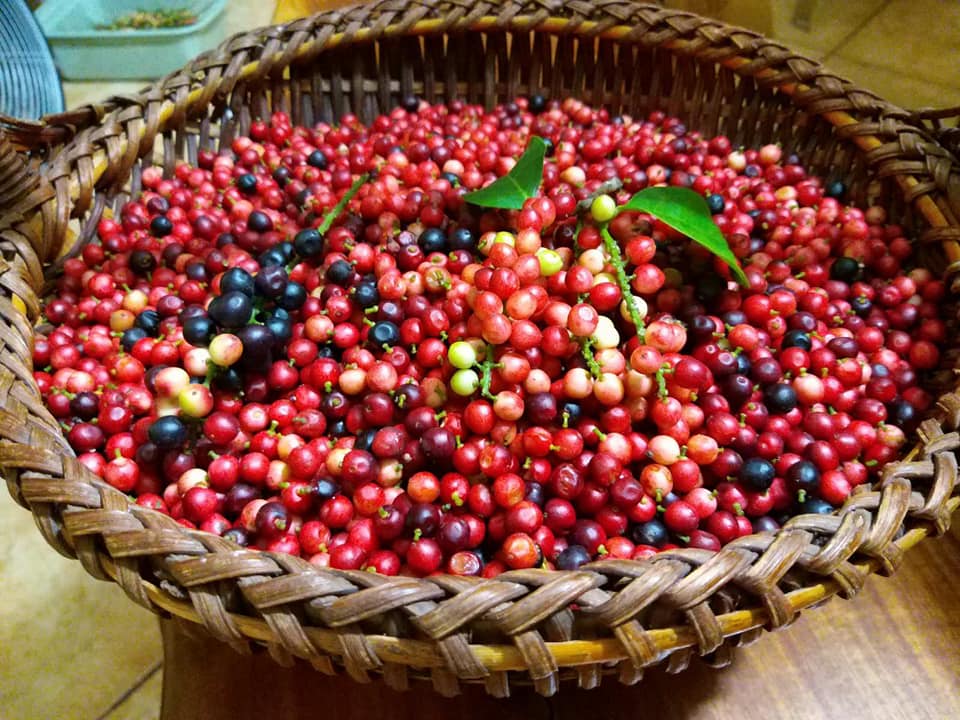 Bignay is also processed into vinegar and jelly (P100).

Individuals from farming families either choose to continue the legacy of their ancestors or go after their passion outside farming. But sometimes, it’s also doing both.

For spouses Xavier and Malou Peña, a retired employee and bank staff respectively, farming has been an open opportunity for them, knowing that they own a farm waiting to be developed. But since they both had day jobs and children to attend to, they didn’t have so much time to fully focus on farming. They finally took the chance to tend their farm when Xavier went for early retirement in 2018. With Xavier being a diabetic, it has become a driving force for the couple to raise beneficial crops on their farm. During that time, they’ve also begun gaining interest in natural remedies for diabetes.

Having been blessed with space and a small mulberry tree that has already been planted on their land, they just opted to plant more fruit trees (mostly berries) and other crops that are advantageous to their health, particularly for Xavier’s condition. “From then on, we bought additional fruit trees and added more mulberries and other berries that we can find. It was trial and error, we did not follow any plan, we just planted as much as our small space can carry,” said Malou. 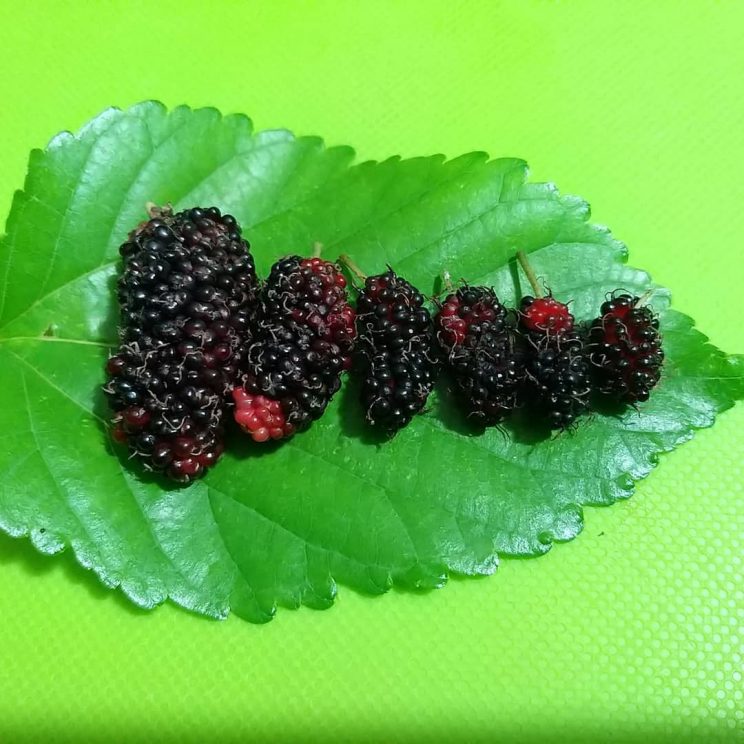 Mulberries are a significant factor as to why the couple commenced working on the farm in 2018.

Growing up on a farm, Malou has always been fond of farming and now considers herself a weekend farmer. The lot where their farm stands today is owned by her family then and was transferred and subdivided between Malou and her siblings. Meanwhile, Xavier is the one who runs the farm full-time today. Malou and their kids also help out every weekend and in their free time.

Redberrytree Farm is located in Dasmarinas, Cavite with a total area of 1.6 hectares. But the current developed space is about 8000sqm, while the remaining parts are yet to be fenced and improved.

The farm was initially for family use only, but with the increasing cost in utilities and salary of farm helpers, the couple decided to augment their profit by selling some of the farm products. Mulberry, hot chilies, and mushrooms are the farm’s main crops. Other crops that they cultivate are magic berry (Synsepalum dulcificum), strawberry, acerola or barbados cherry (Malpighia emarginata), raspberry, bignay (Antidesma bunius), lipote (Syzygium polycephaloides), herbs like basil, and more.

They propagate and sell seedlings of mulberry and other berries if there is excess supply. When the season of berries comes in, they also turn them into jam and use its leaves for tea. Their plant seedlings cost about P100 to P500 depending on the plant size. 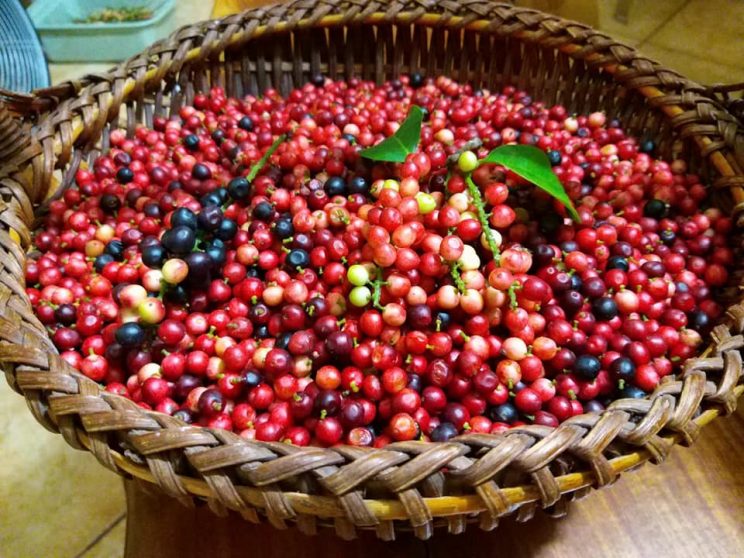 Bignay is also processed into vinegar and jelly (P100).

The couple loves producing mulberry not only because it is good for their health, but also because it is easy to grow. And in terms of the market, “All berries also command a good price in the market since it is not a common fruit available in shops,” says the Peñas. They added, “Mushrooms, on the other hand, are not seasonal. Hence, we call it our cash crop.” 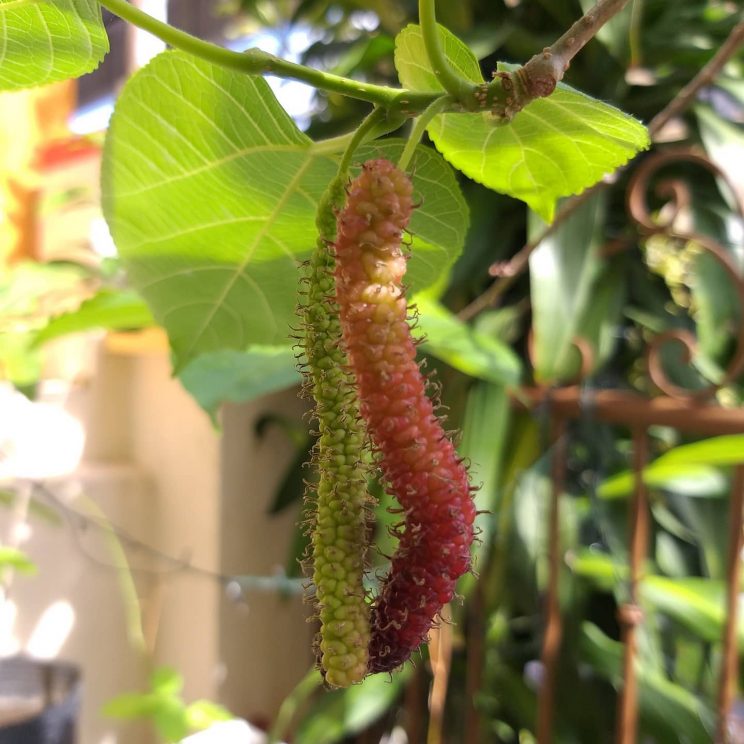 These are himalayan mulberries (Morus serrata) that, as per them, are ready for harvest once the fruits appear from light to dark red.

Mushrooms and mulberries can be grown at any time of the year, which is mainly why they have an abundance of these crops planted on the farm. Malou explains, “Berries like mulberry fruits are [produced] all year round, but the amount would just be sufficient for personal consumption.” Its peak season comes around July to August; a period when they can harvest plenty of fruits that they mostly process into jams for retailing. Redberrytree Farm also raises a few chickens that are set for the family’s personal consumption only. 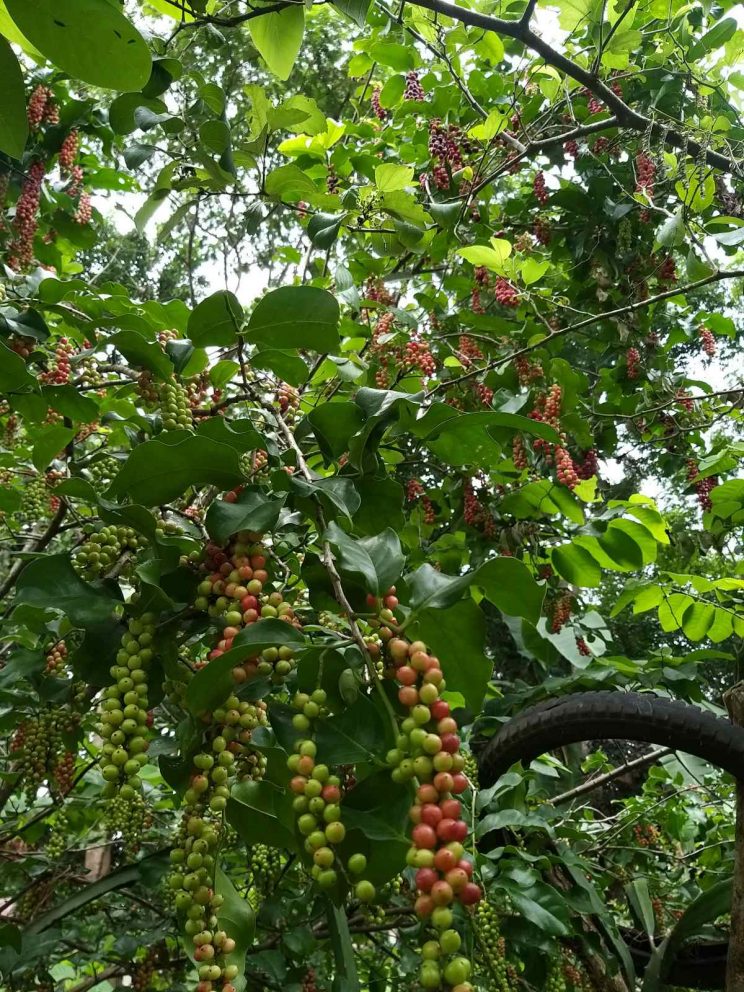 “Bignay is also one of our favorites. The tree always gives us tons of fruits every season. We make it into jams and vinegar. The rest are just for eating,” says the couple-farmer.

Redberrytree Farm advocates and performs natural farming methods. The Peñas create and apply natural fertilizers such as fish amino acid on crops. African Night Crawlers are also their helpers in composting as it provides them with vermicast and vermitea, which they, in turn, apply on the plants.

Every week, they harvest 10 to 12 kilos of mushrooms that they sell for P150 to P180 per kilo (farm price). Some of their value-added products are gourmet tuyo processed with in-house herbs (P150 per bottle), chili garlic in oil (P100 per bottle), dried mulberry leaves (P50 per 25g pack), dried blue ternatea flowers (P100 per 20g pack), dried oyster mushrooms (P75 per 50g), and fruit jams (P150). Although sales of these products are not stable, they still have regular buyers for mushrooms. They also sell their goods online for a wider market reach. In a month, the farm income usually goes around P10,000, while the family saves about P500 to P1000 for monthly food expenses. 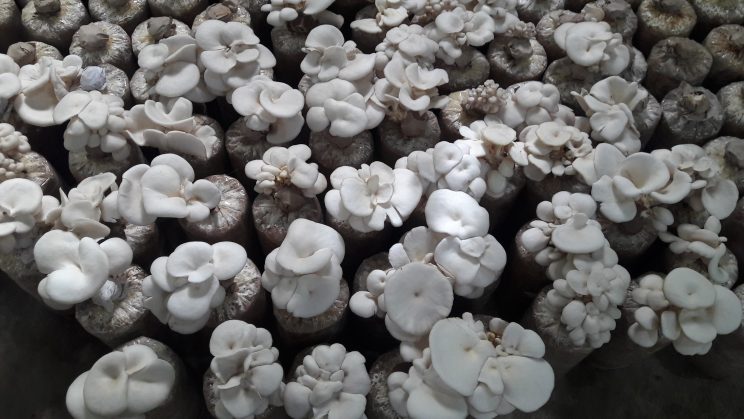 Mushroom is the farm’s cash crops since it provides them stable profit and harvest year-round. One variety that they grow is white and grey oyster mushroom.

Today, they have two regular farmworkers. The wife of one of their farmers is also paid whenever she helps in processing the farm products. They also hire temporary helpers on a day-to-day basis when needed. “Our farm workers were referred to us by a neighbor whose driver has siblings in Bicol area who wants to get a job. We took a young family with one child and then later took another brother from the same family.” These farmhands are given houses and are provided with utilities for free. They have the freedom to plant veggies for their consumption, too.

Thriving during the pandemic

One main challenge on Redberrytree Farm is protection from crop thieves. Since some parts of Redberrytree Farm are not yet fenced and only plants are used as a temporary barrier, sometimes they would be left with nothing to harvest due to crop stealers. Some people cut bamboo on the farm without permission too. The couple is gradually working on the farm fences, however, with the current crisis in mind, they said that they do not prioritize spending for this yet. 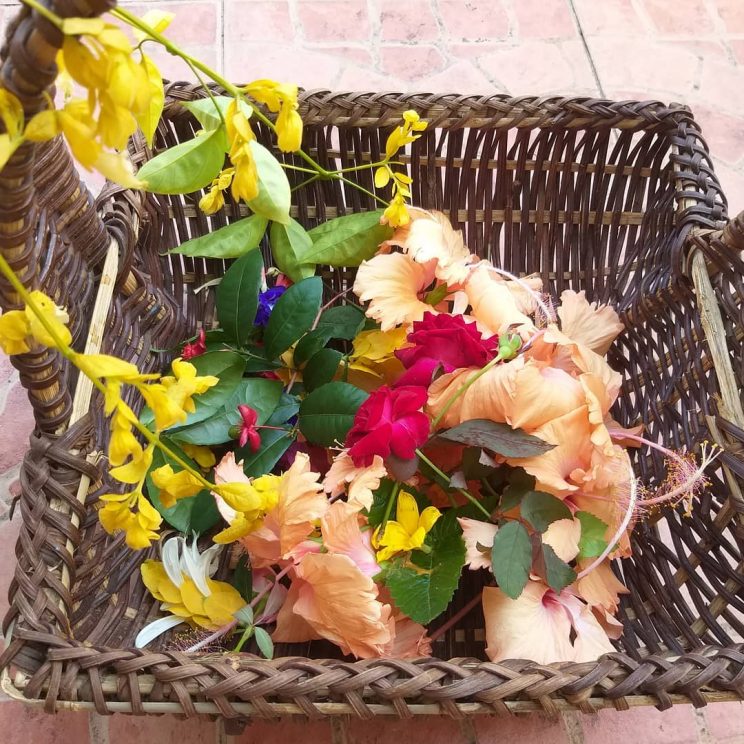 Along with their farm that continuously grows, are the beautiful flowers that also bloom in it such as hibiscus, blue ternatea flowers, and mickey mouse flower (Ochna serrulata).

During the first phase of the community quarantine, the couple admitted that they had zero sales from March to July, and to bear the cost of workers’ salaries and farm utilities, they had to pay them out of their own pocket.

With the current situation, they rarely allow farm visits and prefer delivery services instead. In cases when customers opt to personally buy plants on the farm, they strictly follow the protocols set by the officials. “We decided to stop delivering mushrooms to our customers to avoid exposure [from the virus] and opted to give them to neighbors and family instead,” said the Peñas.

Once they get adequate funds, the next thing that they desire to achieve is to make Redberrytree Farm as a tourism zone where not only their tribe gets to enjoy, but other families can also relax, eat, and shop the farm harvests.

For this duo, like in any other business, farming requires lots of patience. “You need to give your full heart to whatever you are doing and be passionate about it,” they said, “Running a farm is actually costly, but the health benefits and the enjoyment it brings outweighs the price.”