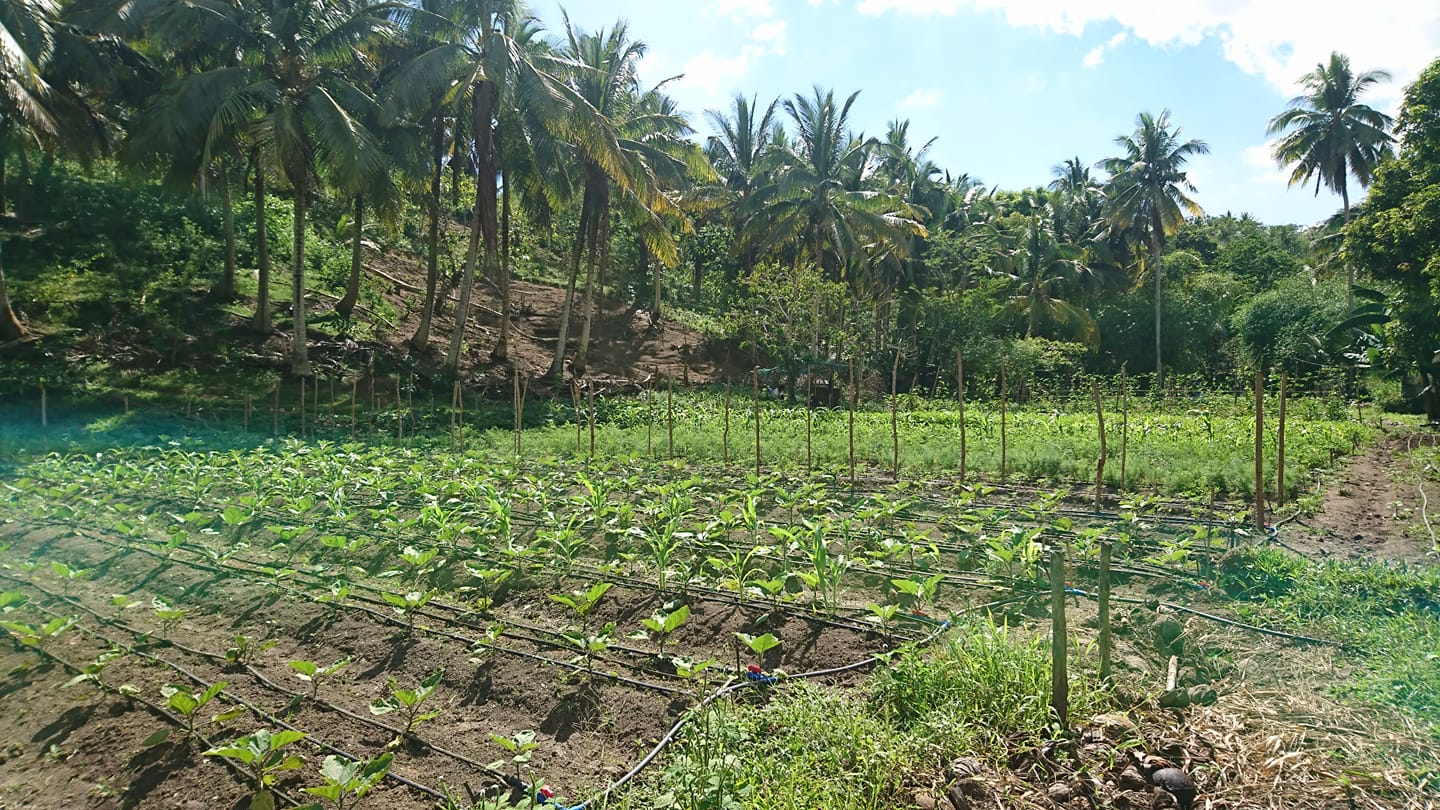 The 25-hectare farm has spaces allotted for vinegar production, coconuts that are designated for personal consumption, and an area for coconut seedlings of several varieties like macapuno, dwarf, and Tagnanan.

Many coconut plantations were greatly affected during the decline of the coconut industry in Quezon years back, And to cope, many farmers were forced to cut down their coconut trees to produce charcoal and coconut lumber instead of copra. Unfortunately, Glinoga Organic farm (GOF) was one of the areas that were denuded because of this.

Glinoga Organic farm is a 25 hectare land in Quezon owned by Nenieveh Glinoga, a Manobo farmer and a retired nurse. Now, 11 hectares of the farm is devoted to organic farming. GOF remains a coconut plantation, but now it is diversified with other crops such as fruits and veggies, rice, and adlai and at the same time, integrated with farm animals like poultry and livestock.

A long time before GOF was formed, Glinoga’s grandmother managed to make the farm a productive coconut plantation and orchard, but when she passed away, the farm was run by a land tenant.

GOF is situated in an undeveloped barangay with limited access roads and before you arrive at the farm, you’ll need to have a 15-minute boat ride. The farm’s inaccessibility comes with an advantage of it being protected from pollutants. With the nearby river that meets the farm’s forest, it also carries a huge potential for several farm activities. To date, one of the activities that GOF offers to guests is a wellness program where the community is taught about the different medicinal herbs available on the farm.

During the early days of the farm, there were hardly any hardwood coconut trees in the area that survived from deforestation. From barren land, Glinogas gradually transformed it into an arable area.

GOF’s veggie patch: The farm applies a permaculture design concept and uses coconut husks to maximize rainwater, which also serves as a home for worms that give nutrients to the soil.

In the first year, they worked on reviving the fertility of the soil through vermicomposting. The initial goal for this was to make the land feasible for food production to provide food for the families who work for the farm. The succeeding year was about working on their next step, which is the restoration of the coconut trees. And in their third year of rebuilding the farm, that’s when they began growing animals and pollinators that are beneficial in completing the farm’s cycle. It was after three years of operation and development that the farm has recovered and now, it continues to be a thriving land with food and animal production.

During those times, the farm has not only improved, but it has also progressed into an enterprise. As they entered the market, GOF eventually got recognized for producing  chemical pesticide-free vegetables and eggs. In 2019, they became an Agricultural Training Institute (ATI) accredited learning site for agriculture.

Nenieveh Glinoga is a retired nurse who has been farming for 12 years.

Production of the tree of life and other crops

Aside from coconut production, GOF grows cacao, coffee, banana, black pepper, and fruit trees that cover 15 hectares of the land. Another four hectares are devoted to the animals where they raise free-range pigs (50 heads), goats (eight heads), chickens for meat (500 heads), layering (100 heads), and breeding (30 heads), and carabaos (two heads). Other areas are for vegetables, corn, rice, fish, and forage. The farm has an apiary of native stingless bees that serve as pollinators for the coconuts, too. 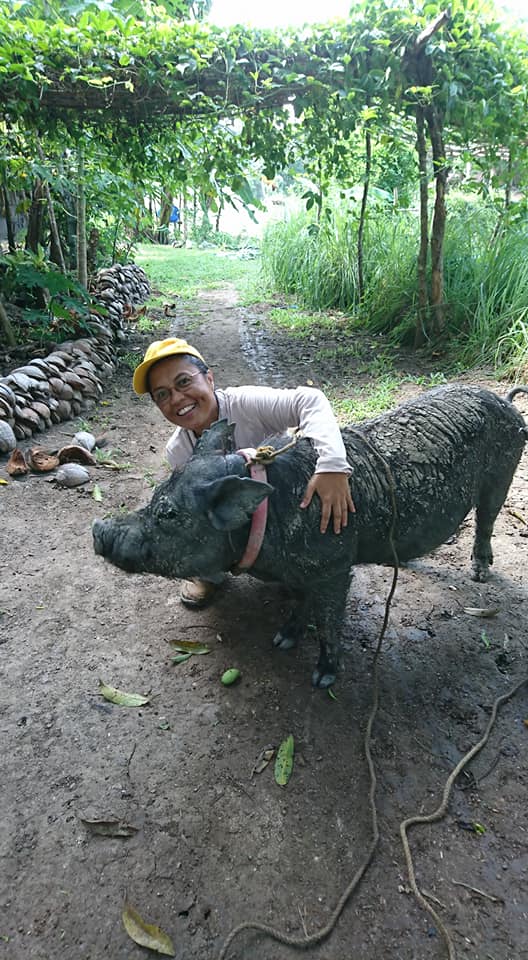 Glinoga with Obie, one of the farm pigs.

GOF practices natural farming protocols – for their fertilizer, they apply brewed vermicasts on the crops every month. They practice vermicomposting and mulching using the farm wastes as well. Manual and drip irrigation are also installed for their water supply. In managing pests and diseases, they give natural concoctions to the plants and animals to boost their health. 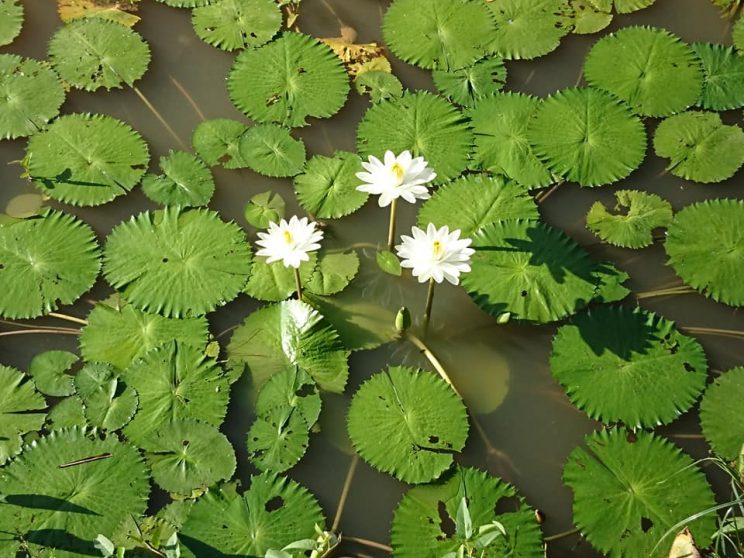 Glinoga Organic Farm has a pond where these water lilies thrive.

They do not harvest fruits directly from trees, but they allow the coconuts to naturally fall to avoid harvesting unripe fruits. They utilize coconut husks for mulching, coconut pulp for animal feed, and coconut water for coco amino acids, a sauce similar to soy sauce, but is made with coconut.

Their weekly harvest is mainly sold to a big supermarket chain, while others are processed into value-added goods or sold to copra buyers. Veggies and other crops are also retailed in a weekend market. They also offer farm products like bamboo shoots, taro, yam, coco vinegar, jams, and more.  Aside from the products, they offer training and workshops to local farmers. GOF is open for farm visits from other local farmers who wish to learn about raising chickens and native pigs.

GOF has received several awards and was also nominated a few times for national awards. In 2015, the farm was given organic certification by the Quezon Participatory Guarantee System (QPGS). Through this certification, it enabled the farm to be a part of the organic market and has allowed GOF to reach a vast network including the major retailers, which made the farm products available on store shelves.

Aside from accessibility being the farm’s biggest challenge, which they see as an edge over other farms, they also face problems in electricity. As per Glinoga, there’s always a blackout in their area and most times, it occurs not only for hours, but sometimes it lasts for days.

When it comes to marketing efforts, they use social media and connect with established clients with larger consumer reach.

Since the farm harvests are both for trade and consumption, they had to shift to a more efficient process to prevent the abuse of resources. They stick to natural methods and have involved the community in the business to give job opportunities.

The Glinogas (standing on the left side) with their ‘Farmily’.

As of today, GOF has five regular farm hands and 20 part-time farmers. Several farmworkers have also undergone agriculture training on the farm for skills improvement. Farm hands are assigned in different zones including livestock, feed mixing, vegetable gardening, and concoction making. For new farmworkers, they would be trained and assisted until they can manage to perform their responsibilities on their own.

Along with the farm’s main goal to provide food for everyone is making sure that no one is left out. Inclusivity is something the farm promotes and ensures to implement by providing equal opportunities for everybody regardless of age, gender, religion or political belief, and physical abilities.

Bohol rice farmers receive over P6.1M worth of machinery