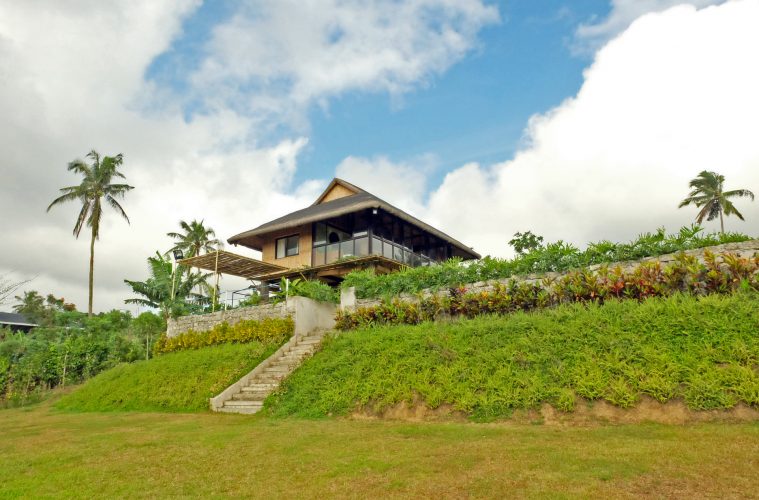 Gabby's Farm boasts of a 'bahay kubo' where they accommodate guests for their farm stay.

Ed and Cecile Gabatan have been working in the corporate world for years. Like many other FIlipinos who have spent their work days dealing with paperwork and facing a computer, they too, dream of retiring on a farm someday where they can enjoy the fresh breeze and grow their own food.

But unlike others who have planned out their farming endeavors, the start of the couple’s farming dream was unexpected and was inspired from their trip down a road less travelled.

“We were on our way to Tagaytay and took a different route instead of the usual Sta. Rosa-Tagaytay road. We passed  through Barangay Casile [in Cabuyao, Laguna] which has an amazing view of Laguna lake and the surrounding towns,” Cecile said.

It didn’t take long before the couple bought a 1.3 hectare farm in the area around 2016 and set to work on developing the property into a habitable farm. After researching and weighing their options, their initial plan was to create a simple 1,000 square meter farm with vegetables and livestock to provide for the family’s personal consumption.

“My father-in-law is an agriculturist. My husband, a civil engineer, knows farming as he has helped his father tend to their farm in Pagsanjan, Laguna. I, on the other hand, have zero knowledge as I was an IT professional, now retired, and grew up in Quezon City,” Cecile said.

With more than a hectare in size, they had to reevaluate their original decision about the farm’s operations and come up with ways to generate funds from the farm for its upkeep. 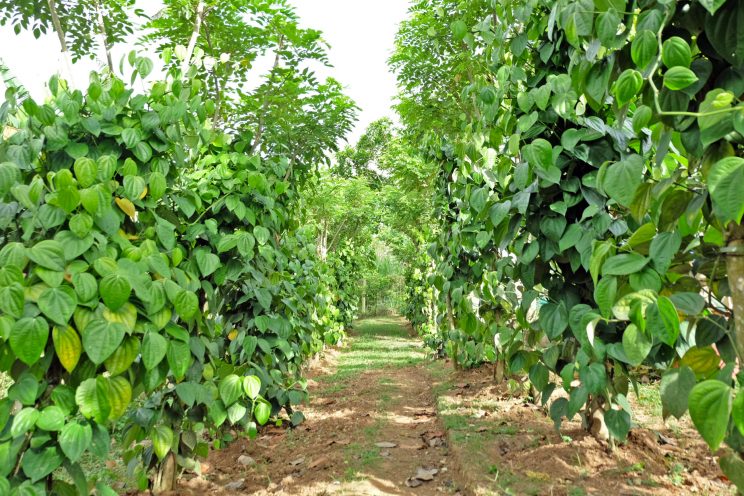 With 1.3 hectares of land at their disposal, the Gabatans decided to plant fruit-bearing trees.

Seeing as how the farm was big enough to accommodate fruit-bearing trees, they opted to plant these instead.

The spoils of Gabby’s Farm

“As for the name Gabby’s, this is my son’s pet name in school [because it was] a shortcut for his last name,” Cecile said.

Planted in the farm since 2017 are 250 black pepper vines, 800 cacao trees, and 200 lanzones. As Cecile emphasized, they wanted to create a farm operation where they can get income from the produce to help in the farm’s maintenance and to pay for the fees of the farmers and caretakers that they hired to work on the property. 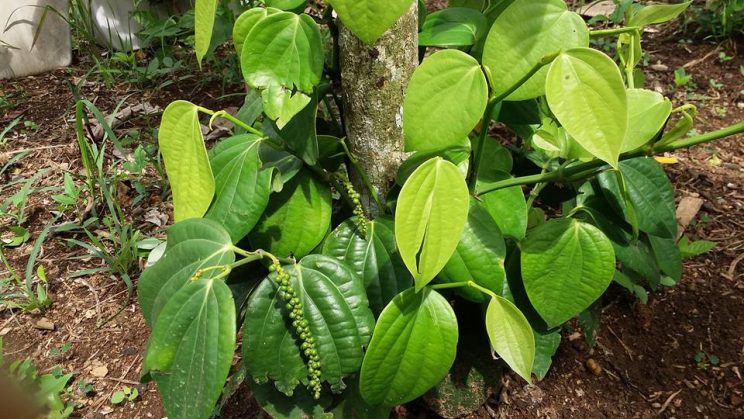 Black pepper vines are one of the main crops in Gabby’s Farm.

Cecile said that they opted to grow these specific crops since they plan to go on a bean to bar tour someday with the help of their cacao trees plus the lanzones trees will be used for pick and pay activities.

In addition to these, the farm also has a regular harvest of bananas and vegetables which are used for the Gabatans’ personal consumption. The family has also tried raising about a hundred chickens which are also for their own use as well as their extended families. Yet, they had to let go of these for hygiene reasons. 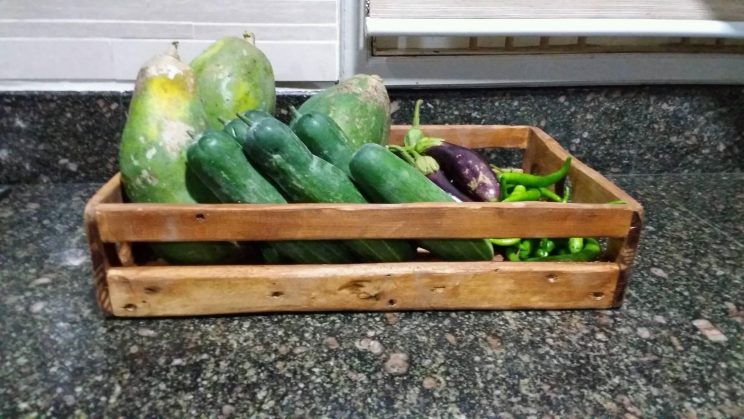 Produce from the farm are for personal consumption of the Gabatans as well as for their relatives and friends.

Everything was going well for the family farm until the unfortunate event of the Taal Volcano eruption in January 2020.

“The black pepper vines are already fruiting. We harvested and sold about 50 kilos last year. But  the Taal eruption affected the farm a lot. Heavy ashfalls have killed the plants and those that survived, stopped fruiting,” Cecile said.

Fortunately, Cecile said that the black pepper vines are starting to fruit again and they may have another harvest in three months.

“We were able to harvest a few pods only before the eruption. We see hope now because the trees have started flowering again. Maybe then, we can start producing tablea and/or  chocolates to be sold,” Cecile added.

The lanzones trees are relatively young and have not started bearing fruits.

Renting as a source of profit

Other than the crops on the farm, the Gabatans had a bahay kubo constructed in the premises by 2017 as well. It was originally meant for the family’s personal use.

“A lot of our  friends and relatives loved our farm because of the fresh air and breathtaking view.  We throw-in fresh veggies and fruits to boot their stay. We hold reunions and parties here. This is when we thought of putting the bahay kubo and the entire place for rent. The income from the rental will cover the cost for the farm’s upkeep,” Cecile said.

She added that because the farm has a big open ground, they also hold events like weddings, and debuts. 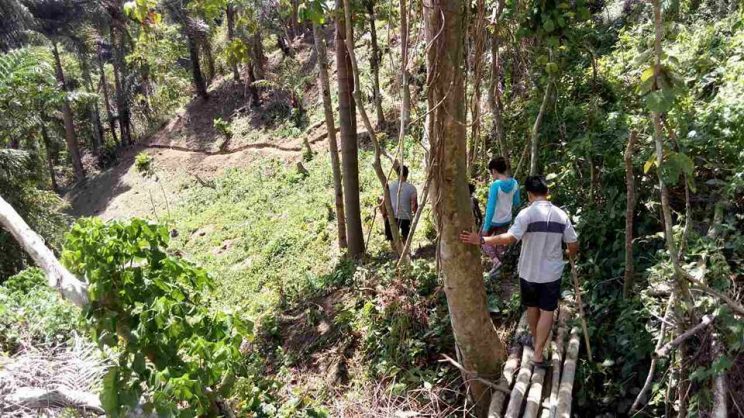 Guests can also enjoy outdoor activities such as hiking down a trail in the farm’s premises.

The ground floor of Gabby’s Farm, according to Cecile, is an open area with tables good enough to sit 15 persons. From there, they have a good view of the forest, Laguna Lake, and the neighboring towns.

Moreover, the farm also has two swings at the ground floor of the bahay kubo for resting, and a counter with stools where one can sip coffee while enjoying the view.

Located on the second floor of the structure is the sala, a dining area good for six persons, and two bedrooms each with a double bed and air conditioning.

“Since we have a big open area,  kids have ample space for outdoor play. They may even pitch tents and bike around.  They can also request for a bonfire setup,” Cecile said.

Plus, the farm also features a nature trail.going to the river where guests can go during the summer months.

Although recently, the farm had to stop their farm stay operations because of the pandemic, they continued the overnight rentals to still earn a profit for maintenance purposes.

Even though the Gabatans didn’t have an initial plan for their farming endeavor, this didn’t stop them from learning about the trade through experience and attending workshops, seminars, and training regarding the proper way to grow food.

Soon, they hope to add workshop events in the list of activities that can be on Gabby’s Farm.

Their story is an example of how a sudden decision, unplanned as it may be, can lead to good things as long as one devotes enough time and effort to adapt to and develop their new environment.