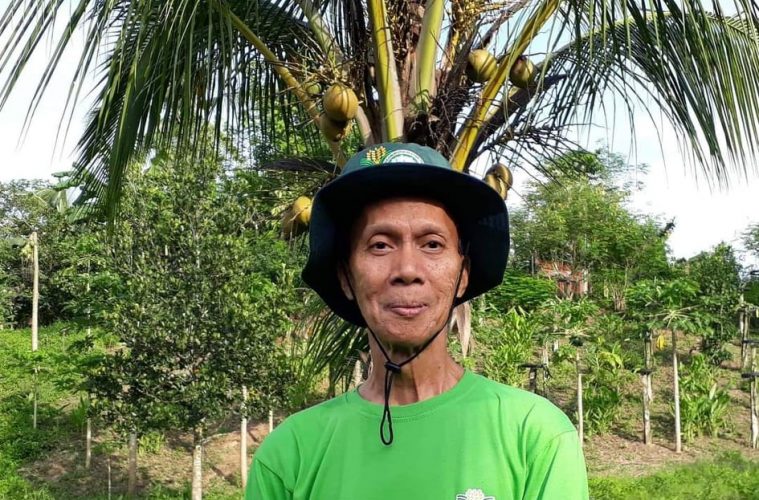 Danny Hizon, a former overseas Filipino worker in Saudi Arabia who turned to farming in his retirement.

Coming from a farming family, Danny Hizon, 69, proprietor of Danizon Farms, says, “Farming, you could say, is in my blood.” Growing up, he was surrounded by the rice and vegetable fields in a remote village in San Rafael, Bulacan. During his childhood, his grandfather tried to teach him how to farm, but all that he wanted then was to study. Recalling those days, he shares that he was not interested in farming, so he would feign sickness as an excuse. “Bowing down made me nauseous. Perhaps, realizing it was futile, I noticed my grandfather stopped pushing me to work in the field.  Silently, I was happy. But I knew I disappointed him,” he said.

Long before retiring, he knew in his heart that he wanted to venture into farming. In hopes of reliving his fond childhood memories, he worked hard and held onto his vision to live in a mountain near the sea while being surrounded by abundant crops and animals grazing in the pasture. “It is an idyll that I have held in my heart since I left my grandfather’s farm.”

Hizon began investing in agriculture not only with this ambition, but because after midlife, he realized the importance of living a healthy lifestyle to prolong his life. Because of this dream, Danizon Farms was built. Danizon Farms was coined from the first two syllables of his given name and the last syllable of his surname.

Although he had a firm decision to venture into farming, it took him time to select a farm location. He couldn’t acquire his grandfather’s farm since it was handed down to others. And despite owning a place close to his grandpa’s farm, he still looked for a place in a mountain near the sea. After buying a parcel of land that was closest to his dream farm setting, he realized the challenges that the site entailed: it was far from the market and has long, dry summers.

He started farm operations three years before his retirement with the help of two farmhands. But since he was based in Saudi Arabia, he only visited the farm when he vacationed in the country. Managing a farm remotely can be challenging, something he found out firsthand: “I left everything to the care of two workers giving them instructions by long-distance,” he added, “When I came to settle on the farm and personally manage it, I discovered that only 10 to 50% of the crops were left standing.”

The 69-year-old full-time farmer spent his first year of post-retirement working on his farm. He replaced the dead crops and added fruit-bearing trees such as cashew, lanzones, durian, mangosteen, and sweet tamarind. As it progressed, he added more crops like dragon fruit, cacao, and more bananas. 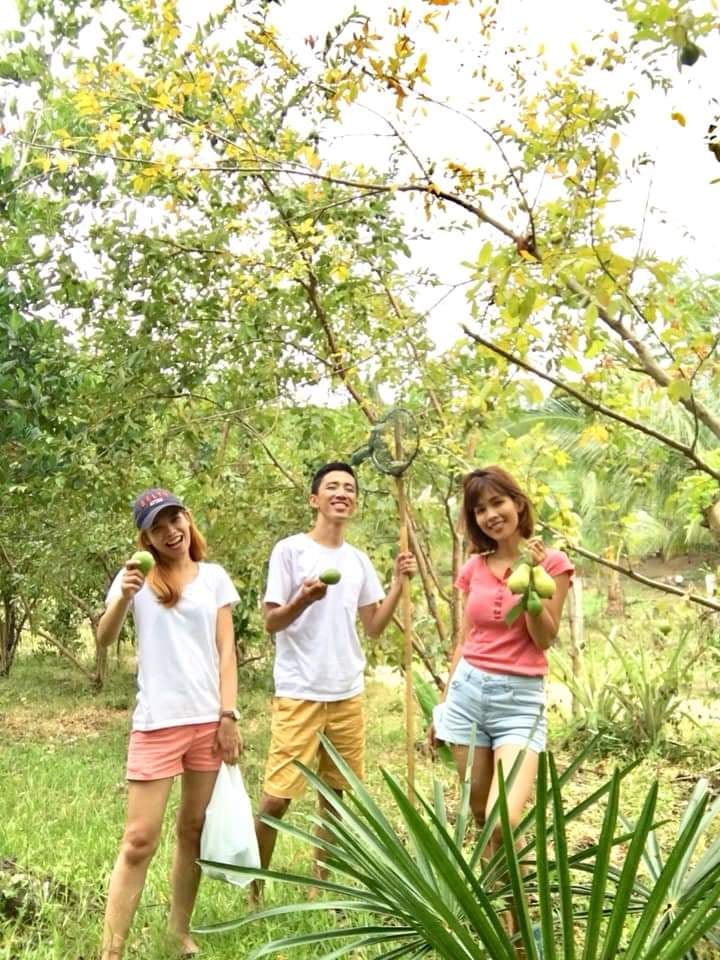 Guests picking fruits on the farm.

Years later, Danizon Farms became the first Agricultural Training Institute (ATI)-accredited Learning Site for Agriculture in Sablayan, Occidental Mindoro and was granted with a “small subsidy for the construction of a training hall and a greenhouse.” As Hizon’s network grew, he had access to opportunities that have deepened his knowledge and experience in agriculture. In 2019, Hizon was chosen to be a mentee of the Department of Trade and Industry (DTI) Provincial Office, something which allowed him to become a certified organic agriculture practitioner.

“I have not come into farming unprepared,” says Hizon. For over a decade before  pursuing his farming endeavors, he had read a lot on fruit and vegetable farming, animal raising, and other agriculture-related topics. Still, “More lessons would be learned as one goes along,” said Hizon. As he explored food production, one of the things that he realized was the importance of growing nurse plants like banana or kakawate (Gliricidia sepium) before planting drought-intolerant crops like mangosteen, cacao, and durian. These nurse plants will help provide enough shade and protection for the young ones. 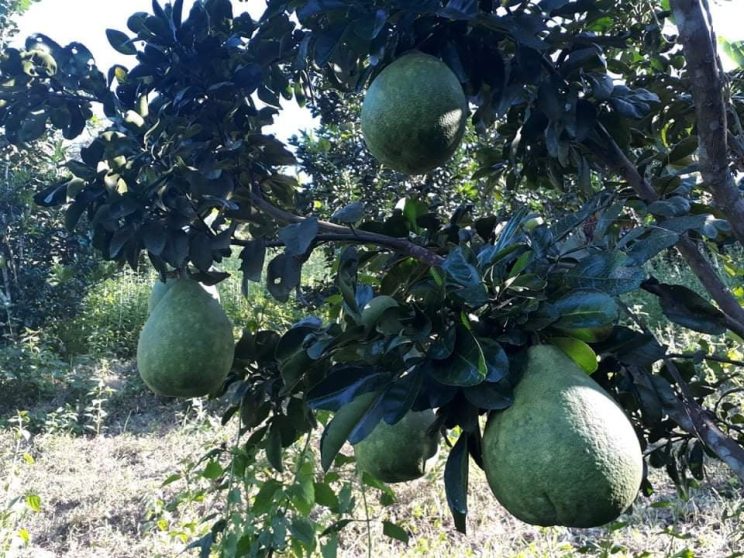 The farm also grows different varieties of pomelo including Magallanes and Thai varieties.

Aside from fruit-bearing plants, other parts of the farm are devoted to rice, vegetables, root crops, herbs, and spices. Hizon’s farm also raises free-range native chickens for egg and meat, cattles that provide the needed manure for vermiculture, and tilapia for their personal consumption.

With the idea of producing natural and chemical-free food, Hizon opted for natural farming. The soil condition, climate, and crops that fruit at different times of the year are some things that he took into account to keep a continuous cash flow on the farm. “I preferred those fruits with long shelf lives considering that the farm is far from the target market in Manila,” he explains. The fruit and vegetables that they produce are for their consumption, while excess harvests are put on sale for friends and acquaintances. 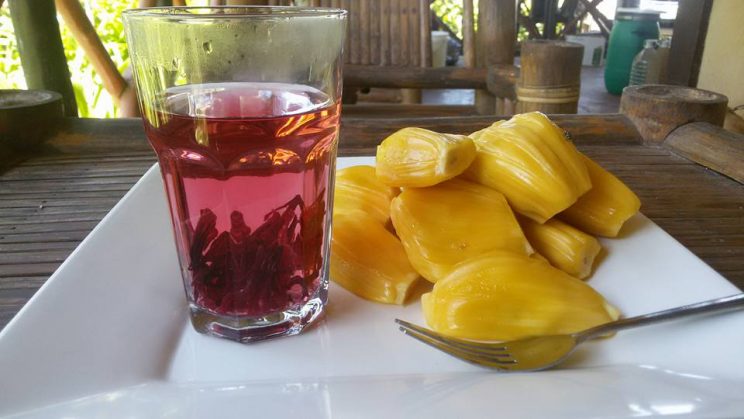 Hizon makes tea out of roselle flowers (Hibiscus sabdariffa), turmeric, and other herbs like mint and tarragon.

In irrigating fruit crops, Hizon employs a worker to do manual irrigation using a hose. They’ve also tried a drip irrigation system at first, however, it didn’t work for the farm. “This proved impractical for us because rats would nibble on the plastic tubes and repairing them repeatedly is tedious,” said the farmer.

They apply manure and vermicompost to fertilize the crops. They also make natural fertilizers such as fermented plant juice, fermented fruit juice, fermented fish amino acid, calcium phosphate, and oriental herbal nutrient, which they apply at different stages of each plant’s life. For macapuno coconut trees, they only apply salt as fertilizer. For pests like weevil, they only use sand. “We apply the principles of integrated pest management and use natural pesticides, which we concoct ourselves from plants and herbs available on the farm.”

As per Hizon, the challenging part of farm maintenance is weeding. To keep the plantation weed-free, it will require four workers to regularly remove and control the weeds. He shared that they used to have goats to supplement workers in weeding, but they had to stop the method since the goats ate the plants, too. “Even with the cattle, we have to be very careful so that they are not set loose,” Hizon adds.

If they weren’t able to sell the produce at the market, they process them in order to add value and to extend the produce’ shelf life. Some of these processed goods include fruit wines, fruit vinegars, pickled papaya, instant turmeric tea, instant salabat, stingless bee honey, sweet macapuno, and macapuno candy. They are continuously researching for more value-added products that they can make out of their crops. 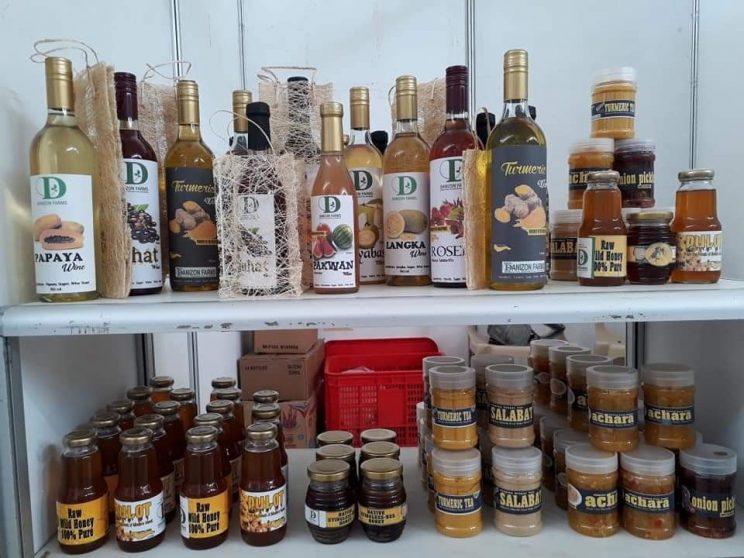 Danizon Farms is also a producer of value-added goods like fruit wines, honey, and teas.

At present, the income of the farm is insufficient to cover the workers’ wages. Despite this, Danizon Farms employs people who do not have a stable livelihood since job opportunities in their community are scarce. “When they find something better to do they leave, but others from the same families would fill in their places. We have an average of four on-call workers in addition to a permanent one.”

Hizon is just one of those individuals who have chosen to retire on a farm. Looking back, his love for farming has always been there. And for this farmer, farming is far beyond just producing crops. It is something that reminds him of his grandfather and parents whose lives were lived on a farm.

In the next part of the article, Hizon imparts the lessons he got from over five years in the agriculture sector.