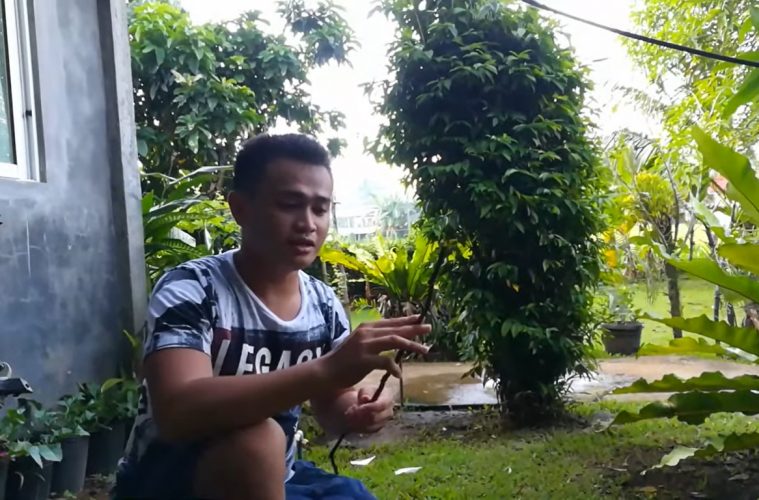 Lucky Jay Saturinas explaining how to grow grapes from cuttings.

How to grow grape vines at home

Lucky Jay L. Saturinas from Southern Leyte studied and trained to be a seafarer. His first contract as a deck cadet in an international vessel went without a hitch. But the same couldn’t be said for his second attempt.

During his second contract, Saturinas experienced psychological abuse from the ship’s first mate which severely impacted his mental health. As a result, he returned to Southern Leyte where he decided to recuperate from what he had encountered.

After two months of staying home, the young displaced seafarer still didn’t feel better until he had a dream where he was eating grapes along with other sweet fruits. From then on, he decided to devote his time to growing grapes as a way to heal himself from the trauma.

But aside from merely growing grapes, Saturinas also engaged in vlogging. In his YouTube channel, known as Lucky Spark, he features his vineyard, shares tips to his followers, inspires others to follow their agricultural dream, and even receives new information about grape farming.

The tips that he shares are from a farmer in La Union who sold him his first cuttings.

In one video published on his channel, Saturinas shares how to grow grape vines at home just like he did.

He began y growing his grapes through cuttings which is why he planted them in pots. But if the grapes are potted, he advises to fertilize them at least once a week because with the amount of soil they’re planted in, they wouldn’t get enough nutrients to help them grow.

“We must be careful not to give too much fertilizer as it could have negative effects such as drying out the leaves,” Saturinas said.

In the same video, Saturinas shared that grapes would need a trellis system for them to grow.

A trellis is a structure made from light wooden or metal bars, to be used as a support for fruit trees or climbing plants.

“For the grape trellises, the optimum height is around six feet or whatever is the most convenient for the person growing or caring for the grapes,” Saturinas said.

On the other hand, the grapes plants must have a two meter distance from each other so as not to inhibit their growth.

He added that it’s also best to invest in pruning shears because in growing grapes, pruning is a crucial task to help the grape plants bear fruit as it promotes stem growth, and helps clear the vine from any dried or infected stems.

In the absence of seeds, Saturinas said that it’s possible to grow grapes from cuttings like he did. Simply select a mature, healthy vine from the grape plant and cut it at a significant length. Make sure that this stem is pruned, meaning, it has no leaves growing on it.

Next, count four nodes, or the part where the leaves used to grow, before cutting the mother plant into smaller pieces.

“We could use three nodes but it’s better if we have four as back up. This way, when the end of the cutting rots or dies, we can trim it down to the next node which will now serve as the plant’s base,” Saturinas said.

Once the cuttings are ready, the next step is to prepare planting bags. Saturinas created a makeshift planting bag by using the tubular plastic that most sari-sari stores use for selling ice water. He then filled these plastic bags with loam soil.

“Remember to poke a hole at the bottom of the plastic bags to promote good drainage and keep your plants safe from root rot,” Saturinas said.

Then, clean the end of the cutting by softly scraping the outside of its stem until the brown part is removed. This will help expedite the process of sprouting roots from the cuttings.

After everything has been secured, put the cutting inside the bag, securing it firmly with soil and allow it to sit for some time.

Caring for the cuttings

“Keep your cuttings in a bright, sunny area but make sure that the rain doesn’t get to it. Once it gets exposed to unnecessary or extreme amounts of water, it dies,” Saturinas said.

When it comes to watering, it’s best to lightly water the cuttings. Saturinas does so by placing his hand inside a container filled with water, then lightly tipping the water in his hand onto the grape plant.

He added that he only waters the grapes every other day, or when the soil feels dry.

By two to three weeks, leaves should have already sprouted from the cuttings, provided that these have been shown proper care.