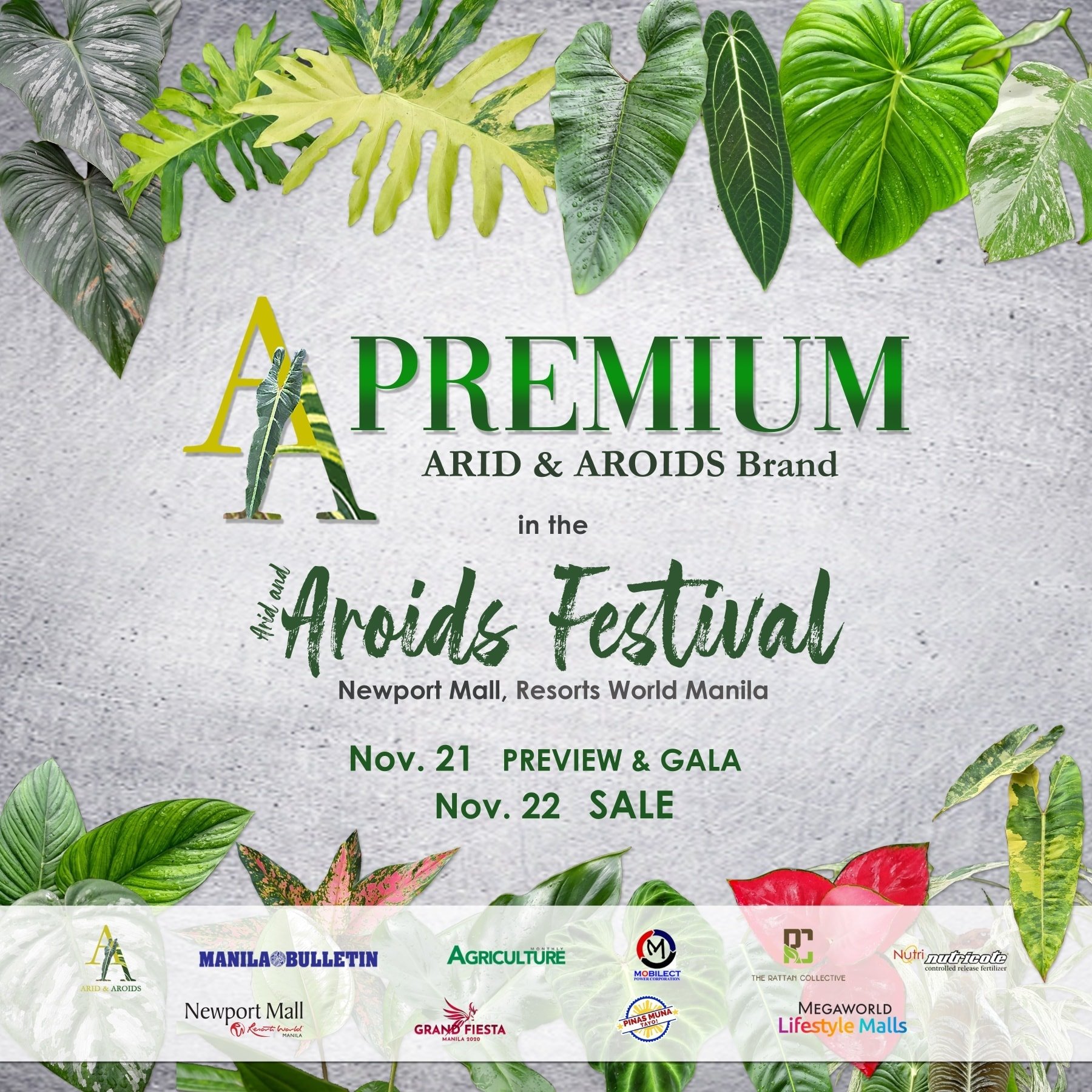 One of the many fads that have popped up during the pandemic is the resurging interest in ornamental plants.

Folks looking for the next big thing will want to check out the Arid and Aroids Festival in Newport Mall which runs until November 22, Sunday. The event showcases plants from Arid and Aroids Nurseries, which has been growing plants from arid lands and tropical countries for 22 years.

This is the same nursery that produced the recently stolen BG “Regale,” valued at 10 Million Pesos.

Aroids are plants under the araceae family. Different varieties of aroids have been enjoying popularity, the latest being monsteras. Festival goers will be able to see and purchase different kinds of aroids, including anthuriums, alocasias, and philodendrons. “We’ve been growing a lot of aroids for 10-12 years, so we have a big collection from South America, particularly Ecuador, Colombia, and Brazil. They weren’t very well known plants before but since the pandemic, a lot of people have been interested in aroid plants and I think the worldwide demand for it is big, that’s why we’re showcasing the aroids collection we’ve been propagating for [more than a decade],” says Boyet Ganigan, one of the owners of Arid and Aroids Nurseries.

The Festival is divided into two parts. The first part, which runs from Nov 18-20, showcases different plants for sale. The second part runs from November 21 to 22, when rare varieties will be brought out for exhibition on the 21st and will be on sale to the public on the 22nd. There will also be a gala night on the 21st which will be by invitation only. “These are plants that aren’t well known but are in big demand. People have seen them on the internet but haven’t seen them [in real life yet],” Ganigan explains.

Arid and Aroids’ posted a list of some of the plants that will be on display with their corresponding prices.

More unlisted plants will be available

According to Ganigan, a reason behind the current popularity of aroids is, aside from their lush and striking foliage, iis because they can thrive indoors. “A lot of people can’t [or don’t want to] leave the house but [want to] keep busy. People get their sanity [from] tending to their plants. Plants have a positive effect on them even if they don’t go outside,” he says in Taglish. “They’ve become close to their plants so every now and then, they’re on social media looking for new plants for their homes.”

Plants, like fashion, have fads. These past few years have seen the rise of cactuses and succulents on social media. Now, it’s aroids. Ganigan estimates that like the cactus craze, aroids will be in demand for at least five to seven years. “I think the reason why it [will last that long] is because there’s a lot of demand but not a lot of production. [It’s the] law of supply and demand,” he says. “The reason why people want to spend more, even if it’s over their budget, is so they can be a pioneer in owning the plant.”

It’s true: plants have been a source of calm for many people during these trying times. “I hope that a lot of people get into plants because they have a good effect on our homes,” Ganigan says. “They help us destress and it’s relaxing to tend to your plants.”

It’s a trend that one hopes will continue, even after the pandemic ends.