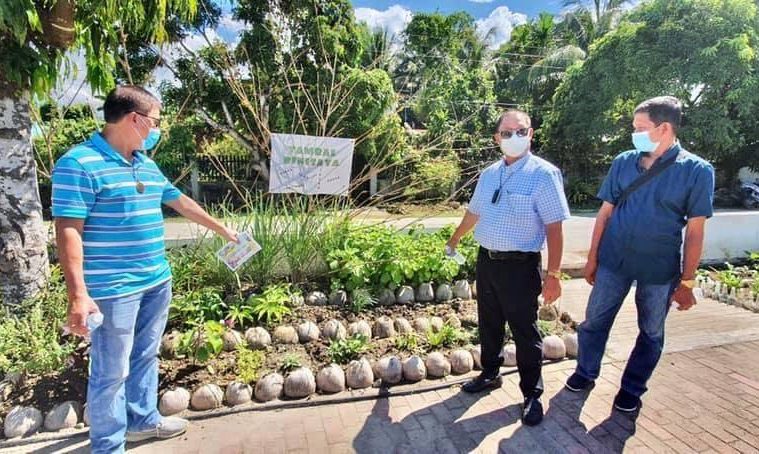 The municipality of Clarin in Bohol is attracting passersby and tourists as it showcases its unique landscape design of beautifully arranged vegetables and herbs fronting its town hall.

This was the statement of Atty. Salvador D. Diputado, regional executive director of the Department of Agriculture (DA)-Central Visayas during its recent visit to Clarin town in Bohol province to campaign for increase food production.

Clarin is a fifth-class northeastern municipality of Bohol around 60 kilometers from Tagbilaran City, the province’s capital.

Clarin mayor Eugeniano Ibarra proudly toured the DA7 team around the premises of the municipal hall to show them the town’s edible landscaped garden planted with assorted vegetables and herbs in support of the DA’s Plant, Plant, Plant Program.

Diputado said that Mayor Ibarra’s initiative of edible landscaping in the town hall’s premises is a first in the Province of Bohol. “This is Mayor Ibarra’s concrete and tangible display of full support to Secretary William Dar’s Gulayan sa Barangay and Gulayan sa Bayan program to ensure that there is always food on the table,” Diputado said.

Mayor Ibarra issued an Executive Order (EO) that institutionalizes the Edible Landscaping Program of Clarin. The said EO mandates the full implementation of the program in all the barangays of Clarin.

According to Diputado, LGU-Clarin will also receive a biodegradable composting facility for its organic agriculture program early next year.

Clarin is a fifth-class northeastern municipality of Bohol around 60 kilometers from Tagbilaran City, the province’s capital.