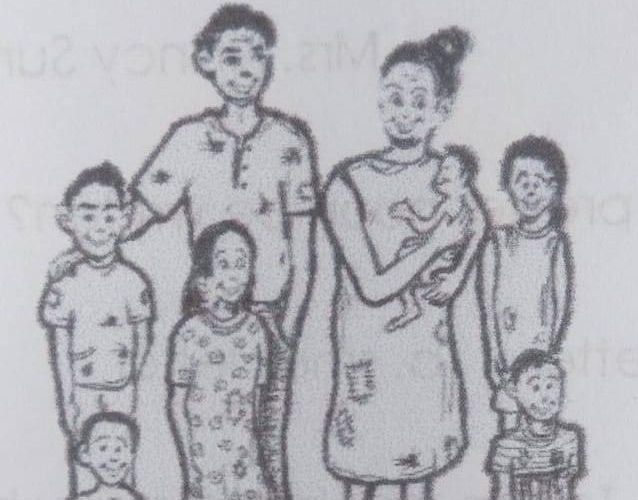 From face-to-face to blended distance learning, students are still adjusting to the sudden change of the education system, needing the help of their parents or guardians in finishing academic tasks at home. For this reason, more parents are getting involved, focusing their attention to their children’s modules and other learning resources.

A mother of a grade three pupil in Marinduque named Jenice Ramiro got disappointed upon seeing an illustration of a farmer’s family in her son’s English module.

The English module of a grade three student in Marinduque about proper and common nouns that depicts a farming family as poor drew ire from people on the internet.

In our interview with Ramiro, she shares that she is a graduate of Agriculture Technology who runs a nursery in Marinduque. According to her, she aims to train her only child to be a farmer, too. Seeing the photo of a farming family in her son’s English module upsets her due to the low representation of farmers.

As per the source of the photos, Jenice Ramiro, the module shows a derogatory portrayal of farmers that also perpetuates stereotypes about them.

In her opinion, they could have shown that the farmer’s family were not wearing ragged clothes and that it’s better if there’s a house next to a farm with abundant crops and healthy animals. She adds, “Kahit hindi maganda ang damit basta hindi naman po hubad at gula-gulanit, wala pang tsinelas,” (Even if the clothing is not elegant, as long as it is not naked and torn or moreso, without slippers.)

Ramiro’s post, which she eventually deleted, caught the attention of thousands of netizens and some even reposted the photos on their respective accounts. This has been circulating on the web and has been receiving criticisms and analysis.

On a Facebook post, Honorio Santos Cruz, a farmer, wrote his opinion regarding this issue, “Maraming nagalit sa illustration ng pamilya daw ng farmer sa MODULE ng DepEd. Nakakagalit naman talaga. Nakakagalit dahil totoo naman na karamihan ng magsasaka ay mahirap.” (Many were angry at the illustration of the farmer ‘s family in DepEd’s module. It’s really maddening. It is enraging because it is true that most farmers are poor.)

He adds that farmers are abused and that the support and financial aid that are supposedly for them are being kept by the ones in the higher posts. There are successful farmers, but only at a small percentage. Many of the farmers’ population are more on the fringes of society, said Cruz. For him, the photo shown in the module is wrong. “It is wrong that the farmers are poor, they are the main reason why we have food on our tables. And this will be corrected if the government will help them to rise, especially that the [Rice Tariffication Law] RTL continues to bring them down.” 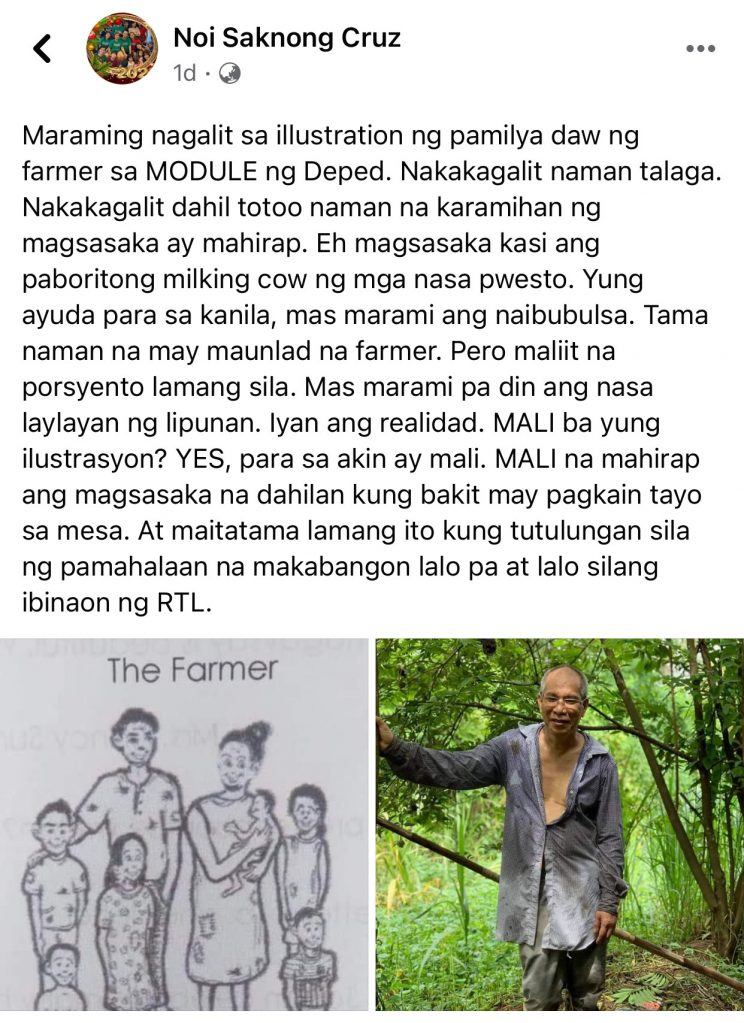 Kit Ian Mausisa, a farmer who left the corporate world to farm, shared his point of view on this via his Facebook account, too.

On his Facebook post, he commented, “Farmers are one of the most exploited sectors here in the Philippines. While it is true that a lot of farmers are poor here in the Philippines due to several factors, that’s no excuse for the DepEd to depict them as such and to stereotype them. A lot of them stayed poor due to the lack of education and training. Yet, they work hard to provide us with food.”

For Mausisa, remodeling the educational system is needed because it holds an important role that contributes not only to the success of current and future farmers, but also for every Filipino. 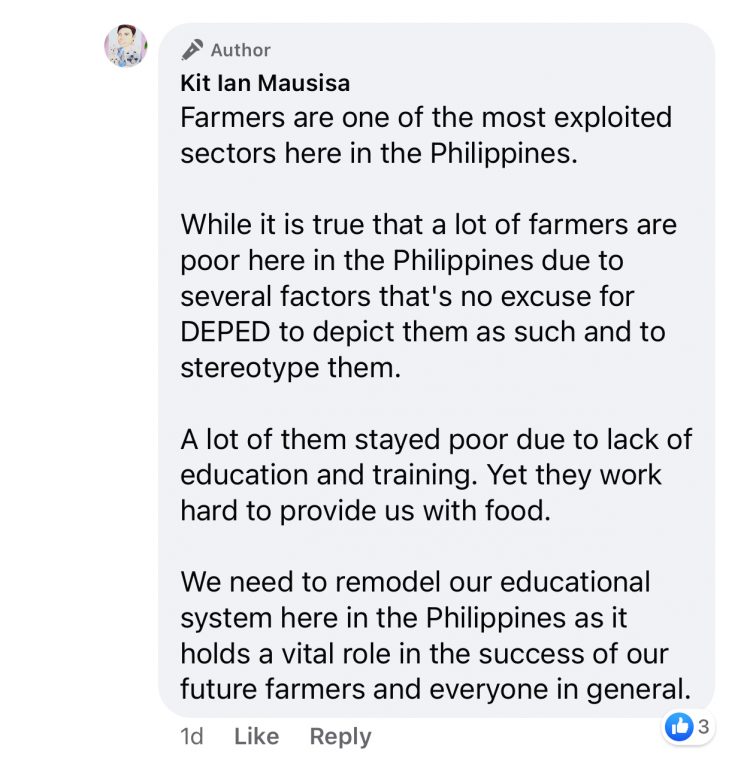 Still, Mausisa hopes for the government sectors to unite in making the Philippine agriculture flourish.

Enrile says that the family in the photo are not farmers, but beggars. According to him, farmers tend to wear clothes with holes sometimes because they use old clothes while out in the fields. “Nevertheless, I still think that the average farmer is poor, but not pulubi (beggar). Kasi may kinakain araw-araw ang magsasaka. (because the farmers have something to eat every day.)”

The depiction of farmers makes him think that it was created by an uninformed person. Although he believes that many farmers in the country are poor, these farmers do not deserve such a situation.

Amid everything, Jonalyn Ajeda, an undergraduate student of Science and Agriculture and a daughter of farmers, takes pride in her farming family. She wrote in the comment section of the reposted photos of the module, “My parents are farmers and we’re nine siblings. Hindi ako nagmamayabang, proud lang ako sa parents ko, proud ako sa mga kapatid ko, proud ako sa pamilya ko dahil produkto kami ng magsasaka o farmers.” (I am not bragging, I am just proud of my parents, I am proud of my siblings, I am proud of my family because we are the product of farmers.) As of now, the DepEd has not released their official statement regarding this matter.