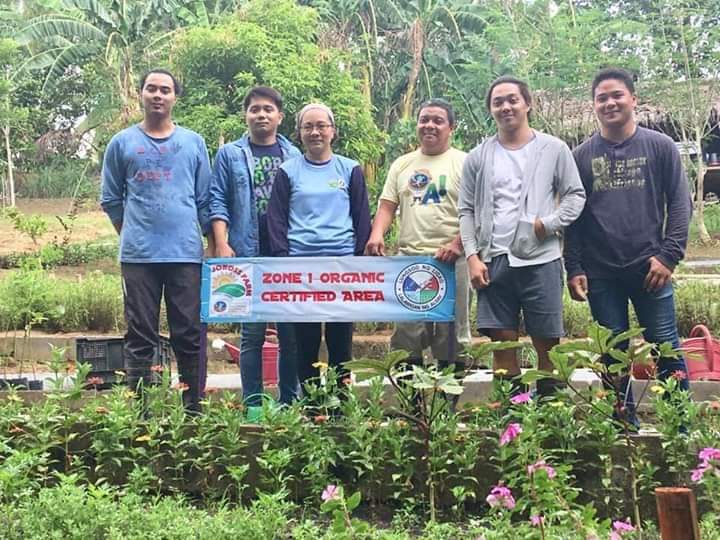 Ross and Jo Obligacion (wearing blue and yellow shirts in the middle) with their children.

Living in the city means convenience and other benefits, but it also entails bearing with traffic, noise, and pollution. For this reason, others may find urban life exhausting, making them yearn for a peaceful and healthy environment.

This is exactly how Jose and Rossinni “Ross” Obligacion felt. The hassle of city living, coupled with Rossinni’s asthma, which was worsening due to pollution, prompted husband and wife to move their family of six from Manila to their farm in Albay. What was once a vacation house is now their family home and their source of livelihood.

Establishing the farm without prior experience

JoRoss Farm is a 1.8-hectare farm found in Ligao City, Albay that follows an Integrated Diversified Organic Farming System (IDOFS). It was named after the proprietors’ first names, Jose and Ross. The property was Jose’s inheritance, which the family chose to develop not only as a vacation house, but also arable land for farming. 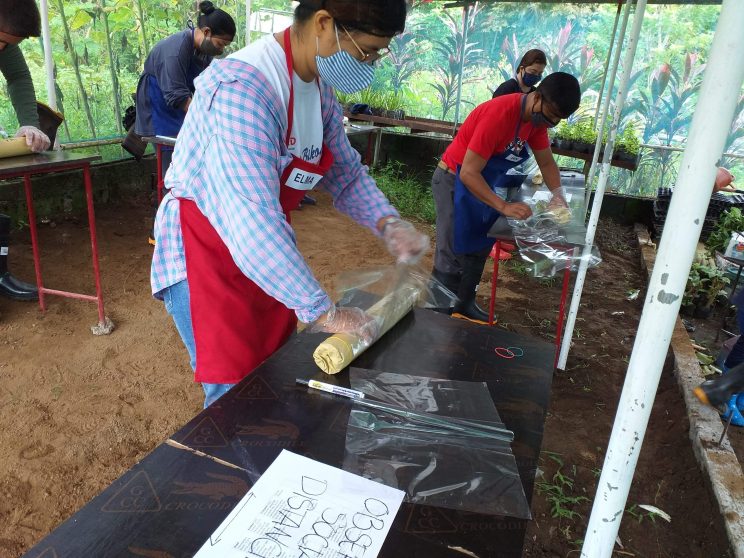 Without any background in farming, they embarked on working in the field, planting about 300 mahogany trees that they obtained with the help of the Department of Environment and Natural Resources (DENR). Upon realizing that mahogany trees will take time to be fully-grown, they ventured into farming crops, starting with eggplants. Initially, they followed a conventional farming practice that, according to them, is a chemical-dependent system. Therefore, although they managed to have abundant harvests at that time, they were not convinced of how the crops’ were grown since it was contrary to their vision, which is to produce healthy and safe food for their family.

From then on, the family attended training and seminars conducted by the Department of Agriculture and other agencies to attain the desired system that they now are recognized for – organic farming.

Partners in life and agriculture

The farm was established in 2012. At first, Ross was the one who managed the farm full time with their eldest son while Jose supported the farm financially through their projects in Manila. It was in 2017 when the whole family decided to move to the farm permanently.

Ross is a licensed nurse while Jose is a former electrical engineer. Both of them do not practice their profession anymore and are now hands-on farmers and instructors of organic agriculture production NC II under TESDA’s scholarship program.

In an interview conducted by the ATI Bicol Region, Ross said in growing crops: “It’s a matter of routine and memorization.” And as a former health professional, she believes that nurturing crops is similar to attending to a patient: “Whatever medication and nutrients that the patients need, you provide it to them; very much like planting.”

Ross, who turned to full-time farming first after learning that living in the metro wasn’t good for her health, has won numerous awards as a farmer. She was an awardee of DA’s category for outstanding rural women as well as an outstanding small individual farmer in organic agriculture where she got nominated and awarded multiple times. JoRoss Farm has also received numerous awards as an agribusiness and is now an ATI-accredited farm school for practical agriculture. It also holds an organic certification from the Organic Certification Center of the Philippines (OCCP).

Crops organically-grown on their prolific farm 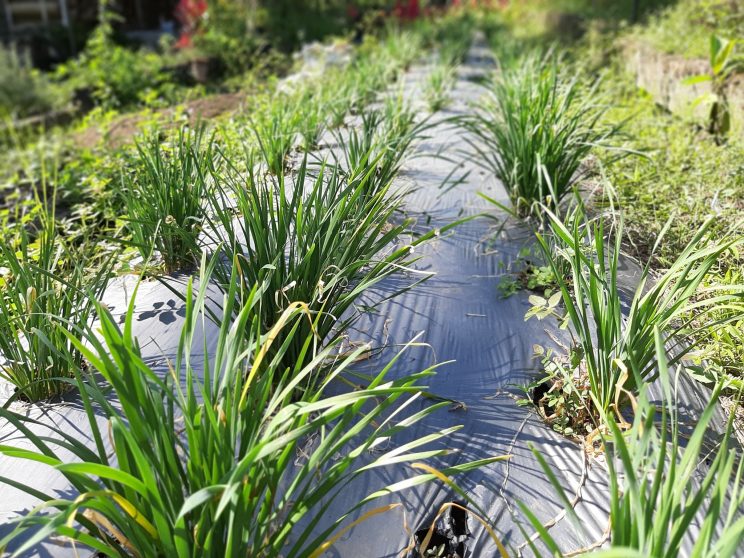 Garlic chives are one of the most used culinary herbs on the farm. As per the Obligacions, this can be grown in pots with good soil mix as long as you provide them with enough water and sunlight.

Herbs are gathered almost every other day while the veggies are collected depending on each crop’s maturity. For the family, aside from the high-value crops, they selected herbs as one of the farm’s key elements since these are difficult to find in the area. With the high demand for herbs, they said that there are even buyers from Manila including chefs and restaurant owners.

The family also does off-season planting and considers this a challenge to be productive and be more self-sufficient. They produce crops that are out of season due to the weather, which according to them, is still beneficial because despite producing crops in small quantities, they grow them with the highest quality while earning a high profit.

Their harvests are both for selling and the family’s consumption. “Sometimes, we could hardly get our own supply because customers would drop by and purchase many of the produce. Some even pay in advance, prior to harvest,” said the Obligacions.

They accept advance orders and post available products online via their Facebook page. They regularly supply restaurants and hotels in Albay and some parts of Camarines Sur. “The Department of Agriculture, both the regional and provincial offices, is an avid client and a very strong product endorser, which led us to go full time in production.” They added that they also participate in trade fairs and exhibits endorsed by the Department of Agriculture whether in and outside the Bicol region.

Day-to-day practices in the field

JoRoss Farm is also home to nine hogs, eight goats, 70 chickens, eight ducks, and three security dogs. The produce forages around the farm that they use feeds to their animals, excluding the dogs. Their chickens are caged at night to restrict them from consuming the herbs and other veggies. These chickens also have a designated grazing area on the farm.

In the morning, they feed the animals and harvest herbs as early as possible to keep the freshness of the plants. Since they implement a natural farming system, they formulate their own fertilizers including fermented fruit juice (FFJ), fermented plant juice (FPJ), and fish amino acid (FAA). The family also makes sure not to apply chlorinated water to the plants. They innovatively collect rainwater that falls on a roof by connecting it to water tanks. They have a deep well that is also a source of water, which is often tested for safety purposes.

The family’s bread and butter

Each pack of spearmint leaf tea contains six tea bags that they sell for P100. Other flavors include mulberry leaves tea and turmeric ginger tea.

The Obligacions share that without typhoons and calamities, the farm normally generates a monthly sales of P60,000 and up.  Aside from their products and goods, they also offer farm tours, training for farmers and aspiring farmers, farm management consultancy, plus they also gain additional profit from farm animals.

During the enhanced community quarantine ensued by the COVID-19, they were able to sustain their food security because of the farm. “Since we are restricted to go out to follow the health protocols, we slaughtered three hogs, chopped them well, and stored it in our freezer for our daily consumption,” the couple added, “We still have meat available. Our farm is self-sustaining during the lockdown.” And when the hog meat is up for grabs, it takes less than an hour to be sold to their customers. 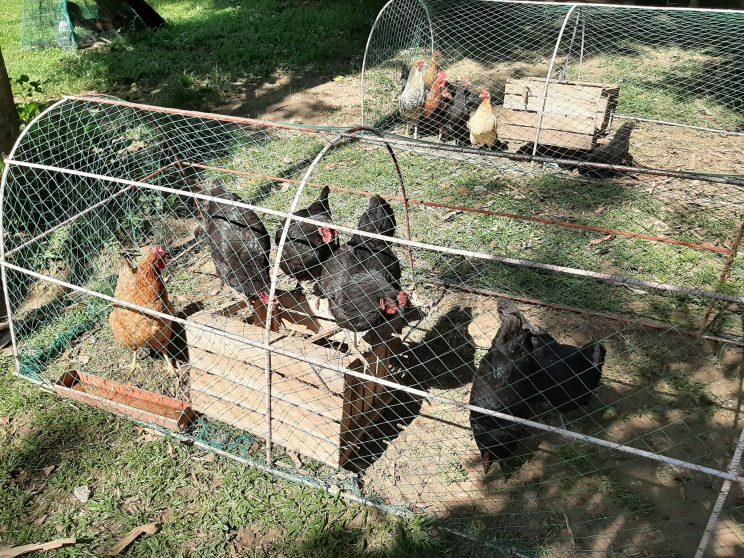 The chickens are kept in tunnels to prevent them from consuming the plants on the farm.

The Obligacions don’t do everything by themselves. They employ farmers when they need extra manpower and they sometimes employ helpers from a group of women which Ross has linkages to, as well as from previous students of the training sessions they’ve conducted in the past. They also promote inclusivity on the farm. One of their employees is a person with disability (PWD) and they also provide opportunities for on-the-job students from different universities who want to experience farming.

During peak season, they employ about four farmhands when needed. Aside from being compensated, the workers enjoy free food and can take home products from the farm to their families. There is available housing if they opt to stay on the farm, too. Performance incentives are also provided.

In their early years of running the farm, looking for the right farmhands was difficult due to some opportunistic people, which made the Obligacions lose their trust in others. Undeterred by such drawbacks that they have faced in the past, they pressed on and eventually found the right connections that helped them progress further.

Living on the farm was one of the decisions that unlocked more opportunities for the family, not only for their health but also for their livelihood.

In the continuation of this article, the couple shares the techniques that they, too, apply on their farm that contributed to their farming success.

Reaping the gains of mechanized farming