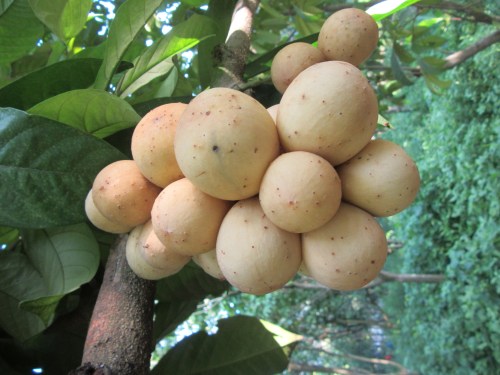 She is a widow who is already in her 80s but she is physically strong. And what is so admirable about her is that she runs an exceptional orchard where she produces exotic fruits of the best quality.

The lady is Naty Abrigo, whose home is in an exclusive subdivision in Makati but who loves to stay six days a week in her 24-hectare fruit farm in Calauan, Laguna. She has very good reasons for staying longer on her farm. For one, the air is very fresh, and so are her favorite fruits. She muses that if she just stayed in the city, she would not be as strong and healthy as she is today.

Although she was born in the city, she has always loved agriculture. When her husband—a medical doctor—was still alive, she devoted herself to growing flowers and ornamental plants while he took care of the farm crops. After her husband passed away more than ten years ago, she had to take over the management of the property. 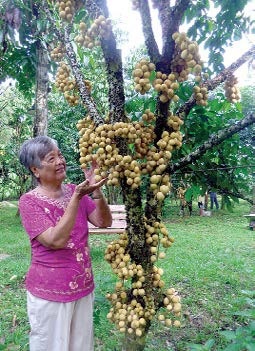 Abrigo has her own farming philosophy. She has to plant the best varieties and to produce in big volumes. The idea, she said, came from her late father who was a businessman in Binondo. Her father told her that if she wanted to become rich, she had to produce or sell big quantities. And that’s her guiding principle in her farm business to this day.

When Longkong lanzones from Thailand became available in the Philippines about a dozen years or so ago, she decided to grow the variety in really big numbers. And so today, she has about 2,500 Longkong trees with about a thousand of them of bearing age. The quantity is not the only remarkable thing about them. Abrigo takes care of her trees extremely well, so that they are very fruitful. For instance, she produces her own vermicompost in huge quantities, and she applies this to her trees. In addition, she spreads thousands of sacks of carbonized rice hull not only to make the soil more permeable but also to make it retain moisture longer. In addition, the carbonized rice hull is rich in potash, which makes fruits sweeter.

When Abrigo read about the Power Grower Combo and Heavy Weight Tandem fertilizers formulated by Alfonso G. Puyat, she immediately bought a lot of them for her trees. She attributes the bumper crop of Longkong lanzones that she is harvesting this year to the two special fertilizers.

Last year, she said that her Longkong trees produced short bunches that were not so plentiful. This year, however, the fruit bunches are so big and long, some of them weigh a kilo or more. The fruits can be found growing from just a few inches from the ground up to the top branches. 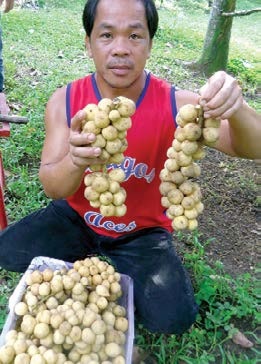 Because longkong fruits are sweet, juicy, latexless, and have small seeds, they really command a much higher price than the local variety. In fact, the imported Longkong from Thailand is being sold for as much as P400 per kilo in upscale fruit stalls in Metro Manila. Mrs. Abrigo believes that her Longkong fruits are even better than those from Bangkok that are being sold locally. But she is only selling hers at P150 per kilo ex-farm. And that is why the local fruit vendors are buying all of her harvest.

Aside from Longkong, Mrs. Abrigo has durian, rambutan, and latexless jackfruit, also in big numbers. Her durian trees, which number about a thousand, are also productive now and are selling at a good price. Her rambutan trees, numbering close to a thousand, are also of the best varieties. And that is why one fruit trader contracted and paid for her rambutan production this year even before the trees started flowering. She only retained more than a dozen big trees for home consumption and for friends.

Her latexless jackfruit is also a big money-maker today because the trees are so fruitful with the application of organic fertilizer and spraying with the power fertilizers of Alfonso Puyat. Did you know that her more than a thousand jackfruit trees started with just one seedling she bought from the Teresa Orchard and Nursery more than ten years ago? The seedling bore fruit just 2.5 years from planting, and all her plants came from the seeds of her harvests.

Mrs. Abrigo is also excited about her grafted mangosteen trees that are just a few feet tall but are now fruiting very well. There are only about a hundred of them now, but we will not be surprised if she will also plant mangosteen by the thousands, too. After all, they can be planted in partial shade between the other trees.

The Abrigo orchard is kept very clean. She has loyal men and women workers who are kept busy controlling the weeds as part of their daily schedule. People who are interested in growing fruit trees should visit her farm at least once. There are practical ideas that can be learned from Mrs. Naty Abrigo.

Is it useful to plant flowers next to your food crops? Definitely.