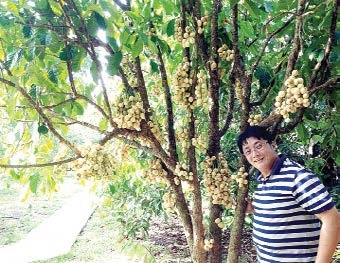 Seventeen years ago, Ruel Reyes and his close chums from high school in San Pablo City were discussing what had happened to their lanzones trees. They recalled the lanzones parties that they once loved to attend and now sorely missed during harvest times of the fruit.

They remembered how highway roadside stands in Laguna Province from Los Baños down to San Pablo and up to Paete used to be full of the yellow lanzones fruits from August up to early December. In the city itself, families who owned orchards, like the Reyeses themselves and their out-of-town friends, would feast on kaings full of lanzones right where their trees were.

“The Bureau of Plant Industry (BPI) personnel say that Laguna Province’s third congressional district—to which San Pablo and the towns of Alaminos, Calauan, Victoria, Liliw, Nagcarlan, and Rizal belong—had about 12 million lanzones trees in the early 2000s,” says Reyes, an amiable dentist who now prefers to be more of an agribusinessman. “Many people didn’t believe the traders who said our lanzones then was a five-billion-peso-a-year industry, but multiply 12 million by 500 pesos worth of fruit harvested per tree, and you’ll know that they weren’t just making things up. And the good thing about that is, many poor rural folk got to share in the bonanza then just by helping in the harvests. Lanzones thus also meant economic benefits to many people.” 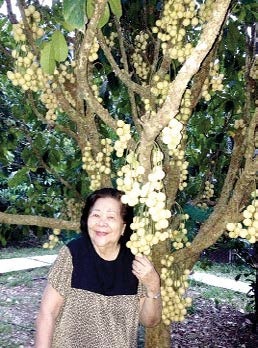 Elma Orosa Paraiso of San Pablo City, the mother of one of the Bio-AgriTech incorporators who is now in the U.S., admires Longkong lanzones fruits in Dr. Ruel Reyes’ farm.

Today, Reyes says that his heart bleeds when he sees the many lanzones trees 30 to 50 years old all over San Pablo that have stopped fruiting for nearly 20 years. “We’re talking here of millions of trees because San Pablo’s nearly 20,000-hectare land area is Laguna’s largest,” he says. “Only one other city— Calamba with its area of about 15,000 hectares, and the towns of Cavinti and Sta. Maria—are over 10,000 hectares in size. To give you an idea of how large San Pablo is, it’s all of 80 barangays.”

Their discussion spurred the dentist and his friends to do something about trying to bring those days back. They began talking to friends in the BPI and the University of the Philippines Los Baños’ College of Agriculture about why the trees no longer bore fruit.

“Lanzones orchard old-timers and other former industry observers also offered us their theories on what they believed caused the decline,” says Reyes. “Among their beliefs was that the eruption of Pinatubo Volcano in Central Luzon in 1991 changed the fruiting pattern of the trees in San Pablo—first causing fruiting only in alternate years, then making it less and less often until there was no fruiting at all. They also pointed to climate change as a culprit, or added that nature just got upset because people were getting too much from it while giving back nearly nothing.

“That last observation jived with what the agri-experts whom we consulted had been telling us,” Reyes continues. “The real problem was the decades of extracting nutrients from the soil without adequately replenishing them. With the guidance of consultants, we began experimenting on ways to rehabilitate and recondition the soil, initially in my own two-hectare home lot and later, in other orchards whose owners listened and warmed up to our advocacy-in-the-making.”

Several years of careful observation, experimentation, and testing led the friends to a solution based on organic farming principles which they believed would offset the variables that negatively impacted lanzones fruiting. They found out for themselves what the soil scientists have consistently asserted—that the natural plant microbial biodiversity of the soil ecosystem has been severely damaged after years of indiscriminate use of commercial fertilizers, pesticides, and fungicides, as well as both natural and man-caused degradation.

The main challenge was to restore the optimum soil conditions that serve as the foundation for the growth of healthy fruit trees by adopting the organic farming approach of providing just the right process to rehabilitate the soil and attain a high level of fruit tree vigor. Deciding to fine-tune and eventually commercialize their solution, the friends and their spouses formed a small firm which they named Bio-AgriTech Inc. (BAT). 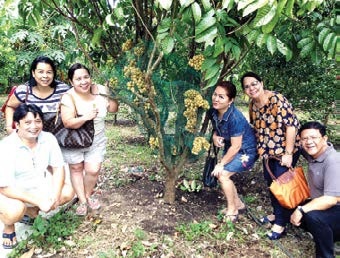 Dr. Ruel Reyes (left) with friends from Bukidnon in Mindanao who are enjoying their visit to
his orchard.

“Five years of careful experimentations and pilot testing using proprietary systems developed by BAT demonstrated that the young and old lanzones trees in our group’s pilot farms responded to the intervention through nutrient management,” says Reyes. “Some 200 native trees in my farm began flowering and fruiting profusely, including the five-year old Longkong and Duku trees that I planted when we started our experiments in earnest. Most of the trees’ trunks bore fruit as low as the level of my knees, which our consultants say is really exceptional. And the fruits were much bigger than what we used to feast on in the past.”

BAT attained the breakthrough by first developing a compost product that is critical for soil amendment. The soil supplement called Compostar is based on a formula of organic material—mostly well-dried chicken dung, farm wastes, and crop residues—that will provide all the macro and micro nutrients, plus all the essential minerals and elements, necessary to attain healthy soil. The supplement contains humates to provide the best environment for activating the growth of normal microbial flora and all the beneficial bacteria and fungi of the soil, and an organic ingredient imported from the United States. One of the BAT incorporators, an industrial engineer who works for a pharmaceutical company in the U.S., handles the importation.

Compostar also contains mycorrhiza for promoting better root growth. The rich soil supplement increases cationic exchange capacities, resulting in the increased capability of plants to absorb the needed nutrients by making these bioavailable for assimilation. This makes the plants healthy enough to be capable of prolific flowering and fruiting, and bolsters their immune systems, allowing them to tolerate stress brought about by pests, diseases, and environmental conditions. In addition to those functions, Compostar corrects soil acidity, enabling it to have the proper pH level.

“BAT has broken down the soil conditioning, flowering, and fruiting regimen into simple, easy-to-follow steps through a four-stage protocol,” says Reyes. “Stage 1 is for soil conditioning and for promoting vegetative growth. For a tree to flower and fruit well, it must have a full crown of leaves that exhibit its health and vigor. We allow two to three months for that. Then, Stage 2 follows for flower induction, Stage 3 for stress conditioning, and Stage 4 for bud-to-fruit sustenance until harvest.”

To ensure adequate and efficient irrigation and supplemental fertilization, BAT prescribes the use of a fertigation network to help implement its protocol’s four stages. The water for fertigation must be treated through specially-formulated Compostar Mightea bags placed in strategically-situated tanks throughout the orchard. As with a drip-irrigation set-up, the system makes use of valve-controlled pipes that deliver the treated water to the trees.

BAT collaborates with its customers in the design and construction of the fertigation system to ensure the network’s optimum efficiency. The firm customizes designs for each customer to adapt to distinct factors inherent with their farms, such as proximity to the main water source, the size of the area fertigated, the number and age of trees, and actual conditions of the soil and trees.

BAT guarantees its technology will help lanzones orchard owners experience once more the abundant harvests of fruit even in trees that have stopped fruiting for years. The firm has begun offering its services to those interested in reviving the dormant lanzones trees in their farms or backyards.

Among the takers of the service is former San Pablo mayor Cesar P. Dizon, who served as city chief executive for 18 years. His eight-hectare farm in Barangay Santisimo Rosario has some 2,000 lanzones trees, more than half of which are 50-year-old native trees that have not been fruiting for 20 years.

“Just four months after our technicians implemented the first three stages of BAT’s protocol, the ex-mayor’s trees began bearing fruits which will ripen around December,” says Reyes. “His seven- year-old Duku and Longkong trees are also profuse with their first young fruits. Now a U.S. resident because all his children live and work there, he returns to San Pablo often to marvel at what BAT has done to his trees and can’t wait for his harvests.

“A retired judge with a farm in neighboring Alaminos town has also contracted BAT to make his old native lanzones trees fruit again,” continues Reyes. “In addition, he has five-year-old Longkong and Duku trees that are not yet fruiting because these are less than half the size of the Longkong and Duku in my orchard, the sizes of which he was quite surprised to see.”

BAT also offers contract farm management services and consultancy to farm owners who are constrained by factors like limited free time, the lack of accessibility to their farm, and non-availability of skilled and reliable farm workers to employ.

Although he still becomes heartbroken when he sees unproductive lanzones trees everywhere, their dead branches sticking out of their sparse and unhealthy-looking crowns, the response of receptive orchard owners heartens and gratifies Reyes. “Most of the people who have heard of our advocacy receive it well,” he says. “You don’t need to talk a lot to convince them that BAT’s technology and mission is worth adopting. Now if only all educated people were like them.”

He has also personally experienced reaping benefits from anzones. In July, a full two to two-and-a-half months before the regular lanzones harvests in Mindanao, he sold the early fruits from his more than 200 trees at P150 per kilogram.

“Imagine the economic impact,” he says, “if everyone in San Pablo who owns lanzones  trees—from residents with backyards to the farm tenants that have a few of their own and to the farm owners themselves—availed themselves of the BAT system for conditioning their soil to make the trees fruit again as they did in the past. It won’t be long before the lanzones parties of the past make a comeback.”