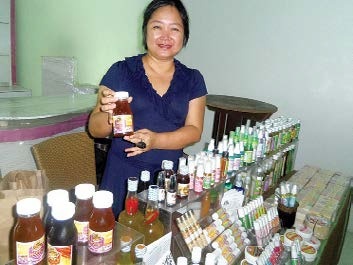 Edilee Omoyon showing a bottle of honey. Also shown are her various bath and wellness products.

It is not unusual for a problem to become a blessing in disguise. It can become the turning point for something great.

Just like what happened to Edilee Omoyon, who used to work for a beauty products company. It happened that her only son Itcho (he has two sisters) had skin asthma, and she saw how he suffered from that malady.

Although Edilee is not technically inclined (she is a business graduate), she was set on doing research to find a moisturizer that could alleviate her son’s suffering. She searched the Internet and talked to experts, especially those on natural medicines. She tried combinations of oil extracts from lemongrass, virgin coconut oil, and avocado oil. When she read that honey also had beneficial effects on wellness, she came up with different kinds of bath soaps with honey as one of the ingredients. 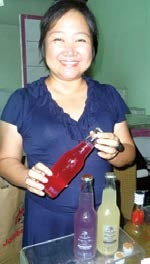 Edilee showing a bottle of her natural soda (Natsoda) made of bignay juice fermented with honey and kefir water.

She found her formulations effective, and so she was motivated to continue developing bath and other wellness products, eventually putting up her own enterprise which she called Milea Bath and Body Wellness. Today, she has a collection of 48 bath and wellness products that she has commercialized.

A good number of these products use honey as one of the ingredients. These include honey soap, goat’s milk and honey soap, carrot honey soap, propolis soap, and others. Propolis, by the way, is another product from honeybees that is said to have antibiotic properties.

Soon, another problem arose for Edilee. She was running short of raw honey for use in her bath and wellness products. That prompted her husband Rico to go into honeybee culture. Rico is also primarily a businessman who used to sell cellphones and other IT gadgets. But he prepared himself to become a honeybee entrepreneur. He enrolled in seminars at Los Baños and also went for training at the University of California-Davis. There, he learned how to artificially inseminate bees for the production of queens.

Today, Rico is devoting his full time to his Milea Bee Farm in San Jose, Batangas, where he cultures both the Italian bee and the native stingless bee. Husband’s and wife’s efforts are complementary; Edilee is now assured of all the honey and other byproducts she needs
in producing her bath and wellness products.

Both husband and wife are making good business in their respective areas. The products from the farm include raw honey, beeswax, bee pollen, and propolis, which Edilee processes into products of higher value. Her latest product is a natural soda (Natsoda) which is made of fresh fruit juice fermented with kefir water and honey. It is a kind of natural health drink because it does not have any synthetic preservatives. Different fruits are used, including bignay, lipote, pineapple, and others.

The bottled fresh honey from Italian bees retails for R395 per half kilo. The Italian bee is the kind that is cultured worldwide. There is also a more expensive raw honey which Rico harvests from his colonies of stingless bees which are indigenous to the Philippines. The amount of honey produced by stingless bees is very little but 100 grams fetches P250.

Rico and Edilee are also making a good income from the bee pollen that is largely collected from the hives of stingless bees. According to Edilee, as much as a kilo of bee pollen is produced by one colony per season, which is once a year in their case. From the 100 colonies that they keep to maturity, they usually get 60 to 100 kilos of bee pollen. And do you know how much the retail value of bee pollen—which is considered an energy food—is? The product retails for P395 per 60-gram pack. Which means that a kilo has a retail value of more than P6,000! 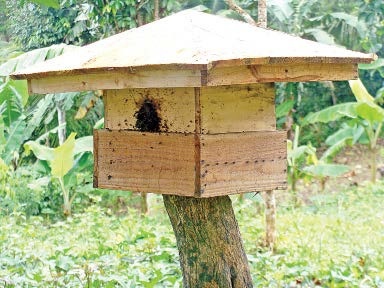 A simple house for stingless bees. There are no honey frames inside.

And then there is also the propolis that is produced in bigger amounts by the stingless bees. Edilee says that as much as one kilo of propolis is produced by one hive of stingless
bees in one season. Propolis is even more expensive than bee pollen, and it is used in a number of Edilee’s wellness products. One such product is propolis throat spray, which can heal mouth sores, sore throat, and even bad breath. It has become a best seller locally and is now exported to Indonesia.

Propolis, by the way, comes from the resins that the bees collect from trees and other plants. The bees use it in constructing their honeycombs and other things needed in the hive. This has been proven to have natural antibiotic properties.

Rico has now become a popular lecturer on bee culture. During a recent AANI Agri-Kapihan at the Agribusiness Center of the Department of Agriculture, attendees praised him for the comprehensive information he shared with them. One attendee, Dr. Perla Rabang, even said that she had learned much more from him than what she got from attending lectures in Los Baños and at a national bee institute in La Union.

And because of the many seminars that Rico has been invited to conduct, he has been selling a lot of starter colonies to new as well as more experienced enthusiasts. A stable colony of stingless bees sells for P2,500 while a colony of Italian bees is sold at P7,500 per colony with four frames inside.

Now you see how the health problem of a son has turned into a blessing for this enterprising couple by the name of Rico and Edilee Omoyon.

3 tips to help kids fall in love with nature