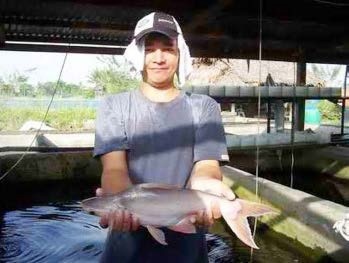 Fresh pangasius in a wet market.

There are many exotic or foreign fishes that have been introduced in the country as aquarium or ornamental fishes. Some of these, like the janitor fish and knife fish, have escaped into the wild and become pests. One aquarium fish, the freshwater hammerhead shark, introduced in the 1980s and now known as the ‘pangasius’, has become a star in our aquaculture industry.

The pangasius (Pangasius hyopthalmus) or Mekong catfish was introduced by the Bureau of Fisheries and Aquatic Resources (BFAR) in 1981 from Thailand for culture as a food fish. The fish was bred through induced spawning by Adelaida Palma in 1985 at the BFAR’s freshwater fisheries station (now the National Inland Fisheries Technology Center) in Tanay, Rizal.

Although initial pond trials showed that the pangasius was a suitable fish for culture with its fast growth, omnivorous food habits, and ability to tolerate low-oxygenated waters, it was not accepted as a food fish locally because of its foreign nature. Thus,
the fingerlings produced by the BFAR were relegated to being aquarium fish.

It was not until the mid-2000s, when large volumes of pangasius fillets were exported by Vietnam to the United States, Europe, and even the Philippines, that local fish farmers and markets began to take a second look at the fish. In 2010, the Department of Trade and Industry (DTI) reported that the Philippines imported 820 tons per month of pangasius fillets from Vietnam to supply the demand of local high-end restaurants, fastfood chains, and hotels. The white flesh of the fish has no intramuscular bones and is lower-priced compared to marine fishes. With its good eating quality, it is prepared into a number of delectable dishes.

To reduce pangasius imports and generate jobs in the countryside, the DTI and BFAR partnered in promoting the farming of the fish locally. With the technology for breeding and grow-out of pangasius in freshwater ponds developed by the BFAR’s NIFTC (National Inland Fisheries Technology Center), a nationwide program was launched in 2008. After pilot-testing the technology first in Northern Mindanao, Central Mindanao, Western Mindanao, and Southern Mindanao, the program was later expanded to Central Luzon, Southern Tagalog, Bicol, and Eastern Visayas.

According to Dr. Adelaida Palma, who presently heads the BFAR-NIFTC, the pangasius cannot spawn naturally in the country. It has to be induced to breed with hormone injections in the rainy months when it is sexually mature at 3 years of age. The fertilized eggs hatch in 27 to 32 hours with water temperature of 28 to 31oC. The larvae start to feed on zooplankton like artemia two days after absorption of the yolk. On the third day, the fry are fed with a powdered feed or stocked in nursery ponds with natural food until they become fingerlings after a month of rearing. 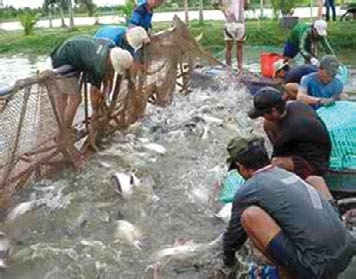 Harvesting pangasius in a pond.

In grow-out ponds measuring 200 to 1,000 square meters (m2), the fingerlings are stocked at 5 to 10/m2 under intensive culture with commercial feeds. The fish attain an average weight of 1 to 1.3 kilograms (kg) each after 6 to 8 months of culture with a 95 to 96% survival rate.

In processing plants, the harvested fish are manually filleted with 30 to 35% recovery, which means that 300 to 350 grams of fillets are recovered from a fish weighing 1 kilo. The skin, fins, and entrails of the fish are made into fish meal. With a production cost of P30-40/kg for the whole fish, the frozen fillets are sold at P125-140/kg.

With pangasius fillets marketed as “Cream Dory” gaining consumer acceptance, some wet markets in Metro Manila are now selling pangasius chunks or steaks for grilling and the heads and belly of the fish for ‘sinigang sa miso’.

In the 2011 assessment of the DTI, the total investment for local pangasius farming was P702.4 million. The growing industry provided jobs for 915 people working in hatcheries, nurseries, grow-out farms, and processing plants. There were 97 hectares of farm ponds that produced 2,264 tons of the fish.

There were also 10 hatcheries in the country capable of producing 272 million fingerlings and 5 processors with a production capacity of 2 to 6 tons of fillets per day. Consequently, there was a 28% drop in the volume of imported fillets from Vietnam in the same year compared to that in 2010.

How to stop and prevent aphids from attacking your garden