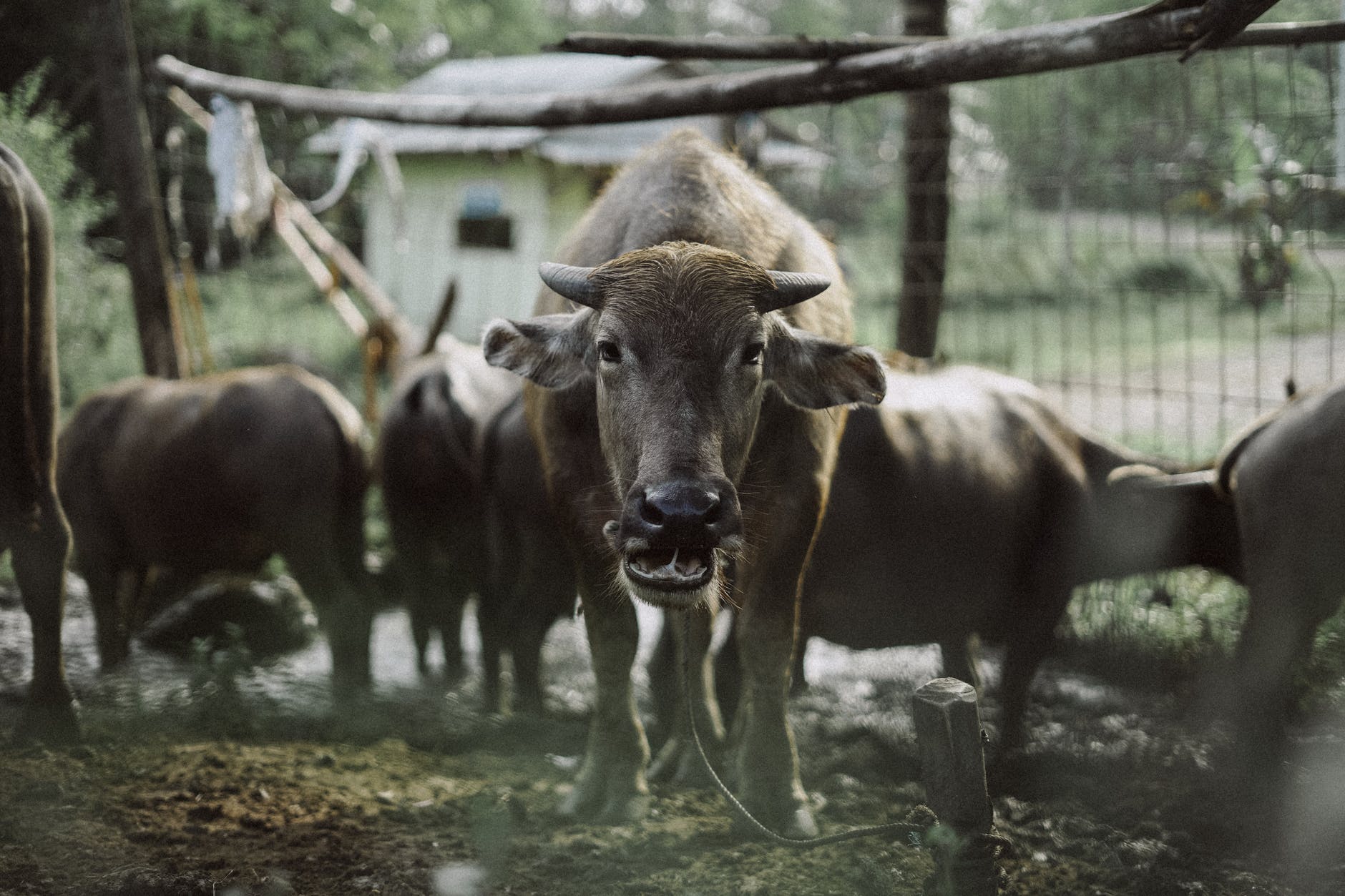 Jesus “Boy” Tulabot, 58, of Brgy. Balete in the city of San Fernando, Pampanga, could be considered the most unscientific carabao raiser in Pampanga, if not the whole of Central Luzon.

He has some 58 head of carabao which are tethered at night—without shelter and fully exposed to the elements—to camachile trees around his house. Tulabot has no forage crops planted, no feeds and feeding recommendations to follow, and no health and sanitation protocols and recommended practices advanced by the scientific community in large cattle production. Instead, Tulabot relies more on his instincts, lifelong experiences, diligence, and an innate passion for carabaos—and for decades, he has reaped success in carabao breeding.

Consider this: while the governorship of Pampanga changed from Bren Guiao to the Lapids and now, Lilia Pineda, Tulabot remained the unofficial consultant on carabao breeding in the province. He is also a well-known figure at the office of the Provincial Veterinarian headed by Dr. Augusto Baluyot Jr. Whenever private investors interested in dairy or carabao production ask for the office’s help in looking for stocks to start up their business, the Provincial Veterinarian’s Office leads them to Tulabot. 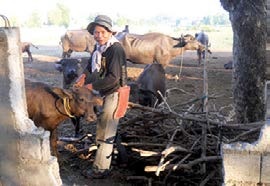 Tulabot tethers a calf before leading the animals to pasture. He has some 58 head of buffaloes which is the source of starting stocks for investors who are interested in buffalo and dairy production.

Cooperatives come to him seeking advice and recommendations on how to start a dairy business or on carabao breeding—and they come away satisfied. A cooperative in Minalin, Pampanga once sought Tulabot’s advice. He visited their area, found hundreds of hectares ideal for pasture, and sold them their initial stocks of Murrah buffaloes. Almost all of the members are now owners of breeding carabaos and reaping benefits from milk production as well.

His passion for carabaos dates back to before he even started schooling. Tulabot’s father assigned him the daily task of pasturing the family’s working carabaos. For him, it was not a job, but a pleasure. Decades later, Tulabot is still pasturing his carabaos seven days a week; he’s followed the same routine for more than four decades.

Tulabot has ten caracows, three bulls, and a number of carabaos aged up to three years which he himself leads to pasture as early as 6 a.m. He sells the yearlings for P25,000 per head, three-year old females at P60,000 per head, and males at P45,000 per head.

When Tulabot was adjudged as the regional Gawad Saka winner in the Large Cattle production category in 2000, the Philippine Carabao Center and the Department of Agriculture awarded him with three purebred Murrah buffaloes worth some R80,000 each. The bulls were put to good use; one has produced some 300 offspring while the other two have produced 150 offspring each. Tulabot’s bulls service caracows coming to him for breeding free of charge. With the purebred Murrah buffaloes, he upgraded his stocks, which used to be all of native carabaos before. 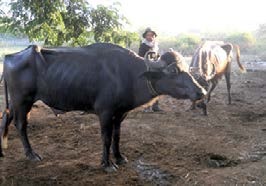 One of Tulabot’s prized bulls of Tulabot, which are always in demand
with farmers in need of bull services. These customers are loyal to
Tulabot.

Tulabot says that, based on his experience, a good caracow produces an average of ten offspring until it is sold for slaughter. He also takes pride in his innate ability to spot a good caracow even from a mile away, so to speak. “Buffalo caracows not only give large offspring but also produce more milk, which provides a daily income for the family,” he says.

When selecting caracows for breeding, he also considers the physical appearance of their udders, which must be soft and firm. He sees these as a positive physical sign that the caracow can produce at least one offspring a year.

Tulabot starts his day as early as three a.m. when he starts milking the caracows. He produces at least 50 liters a day, and his wife Doray sells these wholesale at the Angeles City market for P60 per liter. They earn at least P3,000 a day.

The only time Tulabot had a hard time caring for his animals was in 1991, when Mount Pinatubo erupted and produced a thick layer of ash which covered practically all green vegetation in Pampanga. He had to sacrifice his 3.5 hectare standing crop of sugarcane to serve as a source of feed, but not until after he had carefully washed the sugarcane tops of ashes. This was supplemented by the Department of Agriculture RFU III with a supply of feed block rations made from cane bagasse and molasses.

Tulabot’s way of raising large cattle may be primitive, but his cost of production is almost zero as he says that his system only requires his sweat, diligence, industry, and innate love for carabaos, which he says will never wane in his lifetime.

From aquarium fish to aquaculture star

Millennial realizes the impracticality of purchasing produce in stores, opts to grow food on her balcony