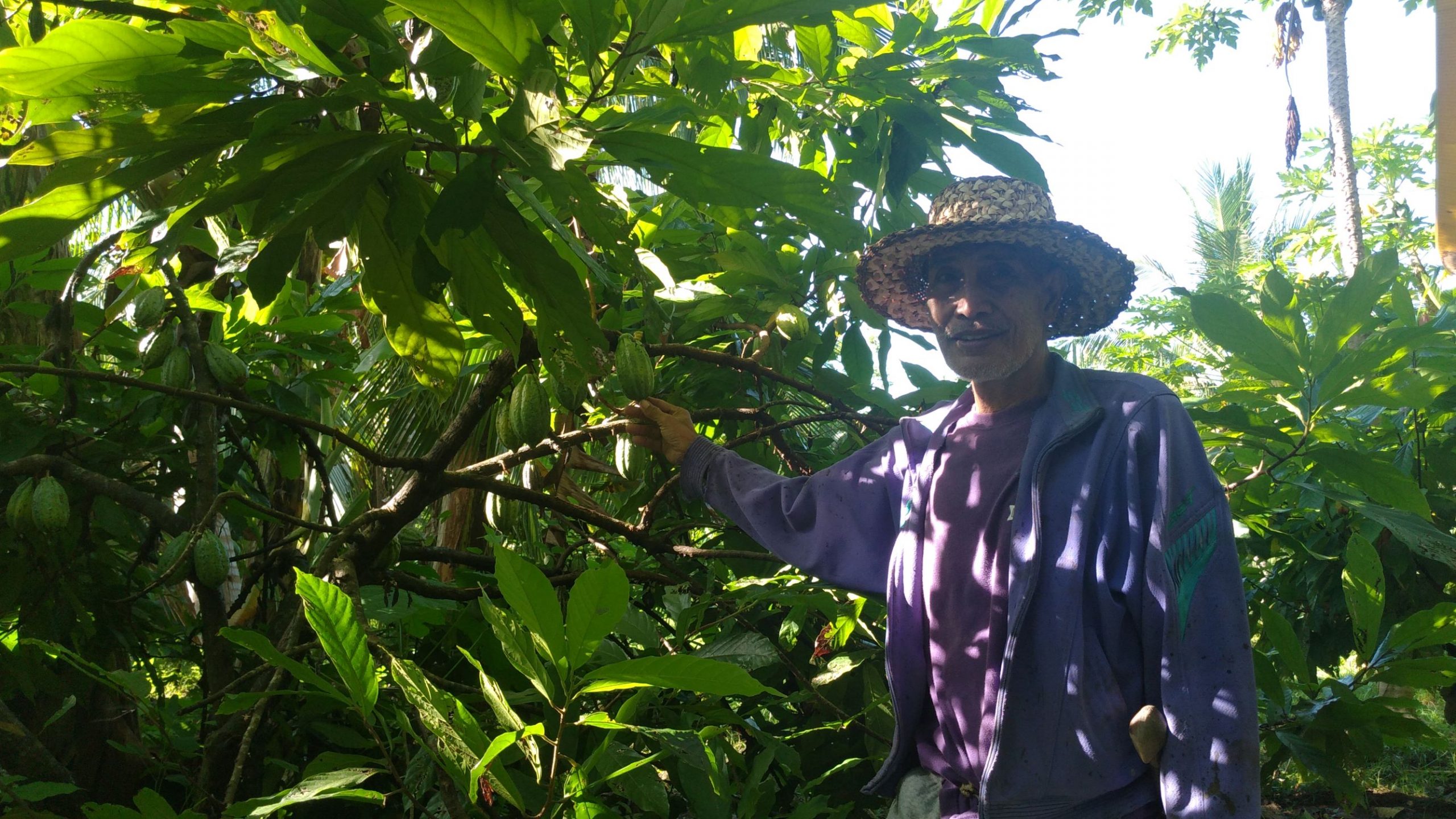 Tatay Sinon switched from conventional to natural farming and is now reaping the multiple fruits of his labor.

Farming is one of the sources of income at Aleosan municipality, North Cotabato. Vicente S. Cornelio, Jr Tatay Sinon to friends, from Barangay Palacat is one such farmer.

The 67 year old is a huge proponent of natural farming in his area. Tatay Sinon started farming in 1998, planting corn using conventional methods because their mountainous area didn’t have enough space for growing rice.

Expecting a high profit, Tatay Sinon ended up what he calls, “short or failure,” which means all his farm income just went to expenses or to traders who supplied their seasonal needs for pesticides, herbicides, and fertilizers. “I [was] a conventional farmer for almost eight years and most of my profit goes to expenses for fertilizers, pesticides, and other instant agricultural products. Actually, it makes my life easy in farming but in [the] long run, I ended without savings, especially for my family,” he said in Ilonggo.

The struggle continued even until his children started college. By then, Tatay Sinon had to admit that farm income was not reliable as financial support due to small profit. “My farm income was always summarized with the ‘short,’ or literally no gain or profit at all after months of waiting. As a family, we ended up increasing our debts to agri-traders,” he half smiled.

Like other parents, Tatay Sinon dreamed of offering a good future for his growing children through the help of his farming but it didn not seem possible. The income for his farm never seemed to meet their needs. “I was more than bothered, and struggled when some of my children started schooling in college. I did not know what to do, especially during the end of the month when my children needed an allowance and budget for their tuition fees. I needed to do something. It wasn’t good anymore,” Tatay Sinon recalled.

This cycle continued until Tatay Sinon discovered organic farming technology, which was  first introduced to their village by Southern Christian College (SCC) through its Sustainable Ecological Agriculture (SEA) and Food Security under its program on Peace and Tri-people Dialogue Project.

SCC is a private institution in Midsayap, Cotabato, that caters and assists the needs of local communities, especially farmers, through their community based-development programming and in a participatory approach. “I’ve been practicing instant farming for so long but when a group of agriculture experts introduced the primitive practice of farming, I accepted it without hesitation and tried the technology,” Tatay Sinon narrated.

According to him, the transition of his farm from the conventional to the natural way of farming entailed a lot of preparation and a total paradigm shift. 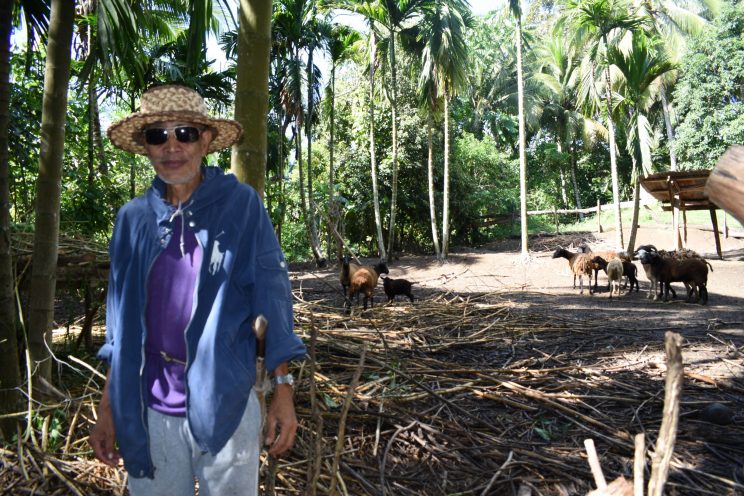 “The training of SCC taught us the essentials of producing safe products in farming and the reality of tedious yet fulfilling organic farming system technology. They emphasized the need to prepare the land for transition like planting high value crops like coconut, mango, rubber trees, and cacao,” Tatay Sinon added.

To fill in the income gap while waiting to harvest their high value crops, the institution also instructed the farmers to plant short term crops like vegetables and other commodities that can be harvested easily and for new organic practitioners to earn a  regular income.

“This kind of preparation helped our family survive as we transitioned from conventional [or] instant farming to [natural farming]. From exciting sessions and

inputs, I realized that for so long, “I had been killing my family slowly because of the unsafe inputs I invested in for crops just to earn small income,” Tatay Sinon added.

After couple of years, the family of Tatay Sinon is already reaping the fruit of their sacrifices and continues to develop almost 6.5 hectares of land as a natural farming area.

Earning in the shadow of a crisis

While many people in the village worry about their daily income, Tatay Sinon is thankful because the prepared long-term crops for his family have been useful during  crisis, including the ongoing COVID-19 pandemic.

Just last October 2020, his family was able to harvest 1,200 kilos of cardava banana at Php 12.50 per kilo, 2000 kilos of rubber, and additional income from copra, which they harvest two times per month. “It helps our family not to worry even during the height of the pandemic. Our crops start to produce income enough for our daily needs. This is the fruit of our sacrifices,” Tatay Sinon shared.

SCC’s institution experts were worried whether practitioners would be able to endure the adoption of natural farming practices when they asked Tatay Sinon, he said that it is not an issue at all. “Just like any battle, right preparation is utmost important. SCC, through their agriculture experts and practitioners, prepared us well and their  constant monitoring and coaching strengthened our capacity to hold this technology firmly,” he said.

He also shared that another important element which helped him sustain his switch to natural farming was, and still is, the strong support of his family. “The support of our family is important in this kind of endeavor. During the time that we feel discouraged, they will be the one to cheer us up and keep us going. Our family will always be an active ally and support to maintain our grounding in the natural farming system,” he said.

The right integration of planting high value crops greatly helps support the family of Tatay Sinon to withstand various challenges while adopting natural farming systems. “Aside from short term crops, in adopting [natural] farming, we need also to take care of domestic animals like hogs, ducks, free range chickens, and turkeys, which we can sell easily to sustain our immediate needs.” 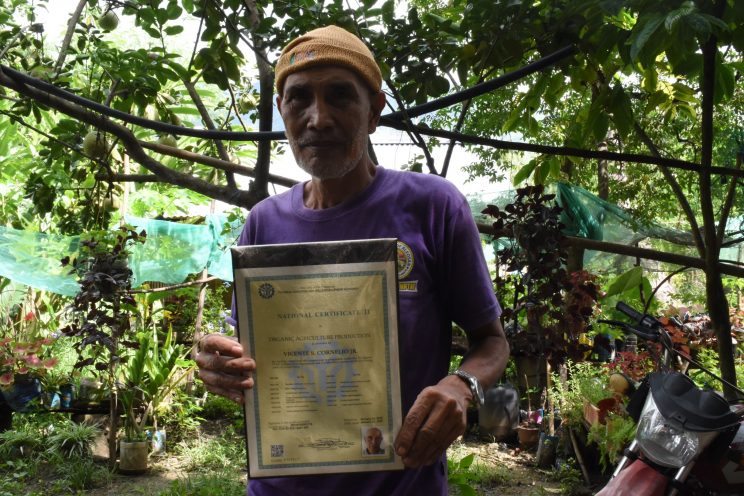 Mr Vicente “Tatay Sinon” shows the National Certification (NC 2) he recently received from the Technical Education Skills Development Authority (TESDA) which motivates him to strengthen his skills in natural farming.

Tatay Sinon doesn’t just want a natural farm. He dreams of turning his land into an eco-tourism site and window for good organic farming practices within the next couple of years. He shares that SCC continues to support his farm through technology, training, and exposing him to other areas with good practices. He now calls his facility VISCOR (VI.cente, S.angco, CO.rnelio) Farm.

He encourages other farmers in the village and other parts of Aleosan municipality to try natural farming. “I am more than willing to share my own discoveries and learnings to them,” he said.

Tatay Sinon is now a natural farming practitioner and influencer in Cotabato. He has been invited by SCC to share his varied experiential-learning not only in Aleosan, but also in Midsayap, Alamada, and as far as in Carmen municipalities. He received his National Certificate 2 (NC2) in Organic Agriculture Production just in January, 2020, and continues to work towards making his dreams come true.

Three challenges and three tips for growing vegetables on a balcony

Firch: A breakthrough in mango drying