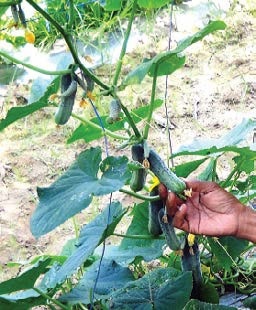 The Puccini variety of pickling cucumber developed by the Dutch company Rijk Zwaan is an early and prolific fruit bearer.

The new pickling cucumber variety with a ready market that Allied Botanical Corporation (ABC) introduced to agrarian reform beneficiaries in Bataan Province in late 2012—and which they began harvesting for the first time in the third week of February 2013—has arrived in Nueva Ecija. ABC’s Central Luzon Region Sales Team bought the Rijk Zwaan Puccini Hybrid Cucumber to two brothers who are experienced vegetable farmers in Talavera town’s Barangay Bantug. The elder brother has been an ABC customer since the late 1990s.

“When we introduced the country’s first hybrid red onion variety—Rio Tinto F1 from the nearly-100-year-old Dutch company Nunhems—in 1999, Romeo Guillermo was among our first field trial farmer-cooperators,” said ABC technologist Arthur Bernardo, who joined the company as agronomist in that year. “He has been our regular customer ever since.”

Guillermo now farms three hectares of land with his younger brother Larry. They grow cucumber, tomatoes, sitao, eggplant, okra, squash, and other pinakbet vegetables. When Bernardo came to them in May to ask if they wanted to be first-time planters of a pickling cucumber that they could begin to harvest in less than 40 days and for which a regular, ready buyer was waiting, they said yes without hesitation. Bernardo told them that the buyer, an established agri-business company with a large fruit-and-vegetables processing plant in Southern Luzon that maintains buying stations in Nueva Ecija and Bulacan, was bigger than the Metro Manila processor that ABC had market linked to the Bataan farmers. 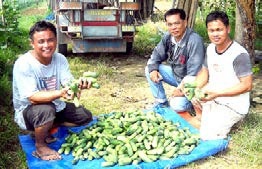 Romeo Guillermo (left) and his younger brother Larry (right) pose with the first 35 kilograms of Puccini Hybrid Pickling Cucumber that they harvested in their farm in Brgy. Bantug, Talavera, Nueva Ecija. With them is ABC technologist Arturo Bernardo.

The brothers bought 65 packets of Puccini seeds to sow directly in the portions of their field where they had grown tomatoes so that the cucumber plants could use the existing trellises. “We had expected rain after the middle part of May when we sowed the seeds of the cucumber,” said Romeo Guillermo. “Without trellises, the young plants were more likely to be affected and would not survive strong rains. Our tomato plots are also more than 30 centimeters (cm) above ground, with 45-cm wide and 30-cm deep trenches between them for good drainage.”

Their sowing distance for the seeds was 30 cm between hills. As each packet of Puccini consisted of approximately 1,000 seeds, the brothers thus grew more than 60,000 plants in their field.

The Guillermos are very familiar with the benefits of good fertilization practices on the yields of vegetable crops. Before transplanting tomato plants in the past, they always applied organic fertilizer as a basal soil fertility enhancer at the rate of 10 bags per hectare. With their Puccini plants, they felt that their soil was still well-conditioned by the organic fertilizer, so all they had to apply was inorganic fertilizer. They dissolved 16-20-0 fertilizer in water and began watering the young plants with the solution eight days after the seedlings emerged.

“When we saw how the vines fruited even before they were half a meter long, we decided to use our solution to water the plants every five days,” said the older Guillermo. “Even our neighbors were amazed at the fruiting ability of our vines, which was easy to see because of the trellises.”

They experienced some difficulty in irrigating their rain-fed field because the rains that they had expected hardly came. Said Guillermo, “We had rain for only two days since we sowed the Puccini seeds, so we had to rely on a water pump. The vines were subjected to a little water stress. In spite of that, look at how they still bore fruit.”

The brothers began harvesting Puccini fruits at least 12 cm long 38 days after they sowed seeds. They picked nearly 140 kilos in that initial harvest. Bernardo advised them that they would have to pick fruits from then on after every two days so that the cucumbers would not be oversized.

At the size that they harvest the fruits, the Puccini cucumbers will be processed into pickle chips and relish. According to Bernardo, the crop’s per-hectare yield, if the buyer wants them to stick to that harvesting size throughout the vines’ productive life, is 24,000 to 30,000 kilograms, with each individual vine producing an average of 1.5 kilos. The brothers’ more-than-60,000 vines will thus yield a total of more than 90,000 kilos.

Puccini is a high-yielding cucumber variety because its vines bear up to three fruits each and have very short internodes. The nodes are the parts of the stem from where the leaves, flowers, and lateral stems originate, while the internodes are the distances between nodes. Puccini vines thus have many nodes and many fruits. The variety is also parthenocarpic, which means that the flowers produce seedless fruit without the need for pollination. The most common cucumbers of this type are the European or ‘burpless’ varieties grown in greenhouses, such as those in Silang and Tagaytay, Cavite, although some varieties like Puccini can also be grown in the open.

Bernardo shared that linking the Guillermo brothers to a processor and regular bulk buyer, as the ABC team did for the Bataan producers of Puccini, was facilitated by the availability of the cucumber variety that’s especially bred for pickling. Cucumber is pickled to considerably lengthen its shelf life and make it add flavor and zest to foods. All cucumber varieties generally can be pickled, but commercial pickle producers in the country now prefer to use those specially bred for pickling purposes. Cucumbers sold fresh for salads, on the other hand, are the slicing varieties.

Called gherkins in Europe, pickling cucumbers are more suitable for that purpose than the slicing varieties because of the uniformity of their length-to-diameter ratio and the absence of voids in their flesh. Instead of being long and lean like the slicing, salad cucumbers, those for pickling are short and squat, already harvestable when these have grown to about seven to 10 cm in length and to two-and-a-half cm in diameter. Pickling
cucumbers like Puccini also bear the popular characteristic of the classic dill pickle that’s very popular in North America — the little bumps on their skin, which are thinner than those of other varieties and which facilitate the penetration of the pickle solution through their rind or peel.

Pickling cucumbers are also typically more attractive than the slicers because of their color. From dark-green at the cucumbers’ stem ends, this hue gradually becomes light-green at the fruits’ blossom ends. Fruits of the other varieties are uniformly either dark or light green from end to end.

The Dutch company Rijk Zwaan, the fourth-largest plant breeder in Europe and one of the top 10 in the world, developed the new cucumber variety that’s most suitable for pickling. Puccini is just one of the 1,000 high-quality varieties in approximately 25 different vegetable crops that are in the company’s broad product range. Its exclusive distributor in the Philippines since mid-2000 is ABC, which is in its 29th year as a trusted and reliable marketer of high-quality vegetable seeds and crop care products.