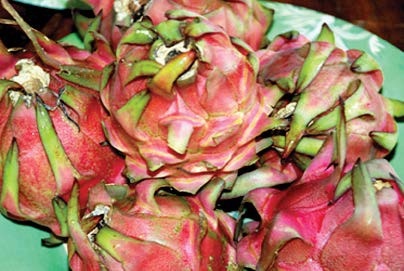 It all started as a hobby and a daily source of healthy food for the Cagungon family of Subic, Zambales.

When a son-in-law brought home some dragon fruits for 79-year-old Cagungon matriarch Puring four years ago, the family became interested in its nutritional and
health benefits, as well as its production and culture.

Aling Puring convinced her son Jun and daughter-in-law Beng to start a small plot of dragon fruit on their 15 hectares of barren land in Subic so that they could raise it to add to their daily diet. They had heard that the consumption of dragon fruit could help lower cholesterol levels and blood sugar levels. 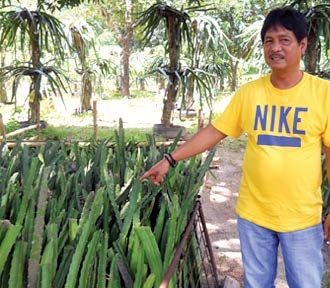 Jun Cagungon shows dragon fruit planting materials, which are another source of income
for the family. They sell dragonfruit seedlings from P30 to P40 each to interested
farmers.

The problem with their land, however, was that the topsoil is too shallow for the successful cultivation of agricultural crops. Just a few feet under were stones. Would dragon fruit thrive on their farm?

The family visited recognized and published successful dragon fruit raisers from the Cavite State University, and those in places from San Rafael, Bulacan to as far as Ilocos Norte to learn some tips and gain practical knowledge on dragon fruit production.

In 2009, the Cagungon family planted their first 1,000 posts/hills of dragon fruit in a one hectare area at a 1 x 1 meter distance of planting. Jun corrected the shallow top soil problem by using used tires to elevate the top soil by a meter. The plant base was filled with a mixture of soil and organic fertilizers and dried materials from their abandoned piggery farm. 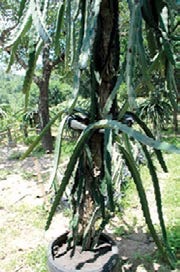 Jun Cagungon elevated the plantings of dragon fruit to correct problems with the shallow topsoil of the rolling farm. Note the used tires which were filled with a mixture of soil and organic fertilizers before the seedlings were planted.

From the first planting, the Cagungon family made it a point to develop and plant a hectare of their farm yearly. Today, they have 4,000 hills of fruiting dragon fruit plants. This year, another hectare is scheduled for development and planting of dragon fruit.

Aling Puring, now 81, proudly attests that her health improved a lot since she began eating dragon fruit. Her blood pressure remains normal and she says that her rheumatic pains have vanished without the use of medication.

The Cagungon family never expected that their dragon fruit farm would bring in an income that would exceed what they made in seafood trading—their main source of income for several decades. They harvest about 30 kilograms (kg) per hill yearly, which translates into a total of some 1.2 tons per year. They sell their produce at a wholesale price of P100 per kg, which gives them about P1.2 million in gross sales per year.

An added source of income for the Cagungon family is the sale of dragon fruit planting
materials at P25 per rooted stem with a length of 12 to 15 inches. Longer planting materials from 16 inches up are sold at P40 apiece, and the family sells thousands of planting materials monthly.

Jun says that the main pests of dragon fruit are ants, but these can easily be controlled with the green-label and cheapest insecticides, particularly Malathion, which are sprayed at the base of the dragon fruit hills. They had occasional bouts with some fungus disease, but the Cagungons exercise measures which are on the preventive side, spraying fungicides even in the absence of symptoms of infestation.

The Cagungons intend to develop another five hectares from their otherwise unproductive land into a fully-developed area that will simultaneously be developed as a tourist and educational destination. Right now, the family is actively researching other aspects for dragon fruit production, including processing the fruit into wine and fruit jams.

Turning what was a hobby farm into a commercial farm for dragon fruit, the Cagungon family has achieved a feat worthy of emulation. The technology they learned and the experienced they acquired in dragon fruit production qualifies them as experts in the field.