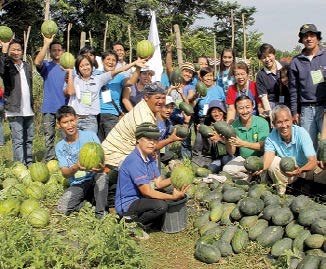 They started as a group with twelve members, and they went into vegetable farming on a half-hectare of leased land in 2004. Today, they have grown into a strong 50-member group that is showing its community the advantages and benefits of growing vegetables.

The Samahang Magsasaka ng Cayapas at Medina (SMCM) in Magallanes, Cavite now operates and manages a 3-hectare leased farm in Brgy. Medina that is planted to ampalaya, tomato, sitao, cucumber, and eggplant, all of which are sold at vegetable markets in Manila, Tanza, Naic, and Cavite City.

The group’s first project was tomato production, and they initially invested a combined P15,000 contributed from their own funds for the purchase of inputs such as seeds,
fertilizers, and pesticides. Fresh from a seminar on vegetable production, all of them voluntarily rendered their services to ensure the success of the project. 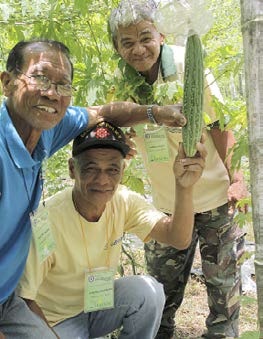 Faustino Andora, Teodorico Escorido, and Santiago Mojica, all members of Samahang Magsasaka ng Cayapas at Medina, pose with one of the fruits of grafted hybrid ampalaya which they have proven to be sturdy and tolerant to stress.

The tomato project earned them a net income of P180,000, and they were thus able to afford a bigger farming area, which they now lease for P21,000 a year; this also enabled
them to expand and diversify to other crops. The group’s standing fund also grew to a present worth of P700,000.

What is interesting about the group’s vegetable project is that it is now gradually veering away from using chemical inputs such as synthetic pesticides and pure chemical fertilizers in growing the vegetables.

Procopio ‘Carpo’ Marges, the group’s manager, shared that they are now adopting environment-friendly farming methods such as the use of enhanced microorganisms and vermicast; they spray pesticides only when necessary. This way, they save on the cost of expensive pesticides and significantly cut their fertilizer expenses.

They learned about such practices from seminars conducted by the local office of the Department of Agriculture (DA), which opened new opportunities for them to improve their method of farming.

In producing eggplant, for instance, Marges recalls that they were used to spraying the plants with pesticides every seven days to keep away fruit and shoot borers. Regular application of inorganic fertilizer was also a must to keep the plants productive. There was an instance when, due to borer infestation, they stopped picking the fruits and left the plants untouched for two straight months to see what would happen. To their amazement, when they checked on the eggplants again, there borers were gone. So they fertilized the plants and were able to produce good quality fruits again. This made Marges think that they didn’t have to religiously spray eggplants with pesticides to control pests.

Just recently, Marges and his members were among the 123 farmers who participated in a 3-month training program called Kabalikat sa Kabuhayan Farmers Training (KSKFT) initiated by SM Foundation, Inc., Harbest Agribusiness Corporation, the regional field unit of the DA, and their local government unit. A portion of the group’s farm was converted into a demonstration farm where enrollees could get hands-on learning experience on modern vegetable farming. 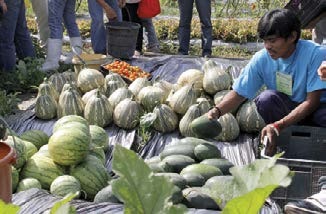 A graduate putting the watermelons in a plastic crate for hauling; Couple Juana and Santiago Mojica are among the 123 graduates of the 3-month KSKFT program.

Asked why he joined the training program, Faustino Andora, 76, who is also a barangay kagawad in Brgy. 4 of Magallanes and a farmer-participant of KSKFT said, “Farmers should also learn the modern way of farming to be able to produce more and better quality crops.” Although their family has been into farming since he was a child and he owns a modest-sized farm lot, Andora believes that being able to learn and acquire the new methods of farming can help improve their production.

Meanwhile, Marges also said that the techniques they learned from KSKFT—from land preparation to the use of plastic mulch, good seeds, balanced fertilization, and integrated pest management methods—perfectly complement their existing practices. The training also taught them to adopt proper record keeping for monitoring their group’s finances and activities.

What excites Marges and his fellow farmers in the group is the possibility of supplying vegetables to retail giant SM. But to do this, he said that their production must become systematic to meet its strict requirements in terms of quality and quantity.

Meanwhile, the group will be pursuing more profitable crops this season using the know-how they acquired from KSKFT. Last June, they planted the hybrid tomato variety Dmax on a half-hectare portion of the farm, hoping to take advantage of the high price of the vegetable this wet season.

Another profitable crop of the group is the hybrid Galaxy ampalaya grafted onto patola rootstock. Andora said that grafted ampalaya is very sturdy and tolerates stresses and extreme weather conditions well. Last May, they planted

1,000 hills of this variety in an adjacent lot. Among SMCM members’ benefits is a free supply of vegetables for home consumption. Aside from this, they are entitled to receive a share from the sales of the vegetables based on the number of days they worked on the farm on a shifting basis, according to Marges.

For example, if the net sales for the month after the expenses and dues are deducted amount to P100,000, this will be divided by the total number of workdays that members have rendered. If the attendance sheet records a combined total of 400 workdays within the one-month period, each member who worked will be paid at the rate of P250 per day. Therefore, if a member rendered a total of 8 days (2 days a week) for the entire month, he will receive a net share of P2,000. Members who worked for more days get a higher share, but this usually happens when they take over the chores of other members who are unable to attend to their responsibilities due to various reasons.

The proper techniques that the farmer members apply on their farm are being replicated in their respective areas, whether on a backyard or a bigger farm. This is what Santiago Mojica and his wife Juana are doing at their three-hectare farm in Brgy. Urdaneta, Magallanes. There, they are planting eggplant, tomato, and cucumber in between rows of coconut trees. They are also into vermiculture and are now producing their own organic fertilizer.

The SMCM members are likewise optimistic that with their newly acquired practices in vegetable farming from KSKFT, they can be more confident that they will be able to produce vegetables not only for their own consumption, but also for their livelihood.