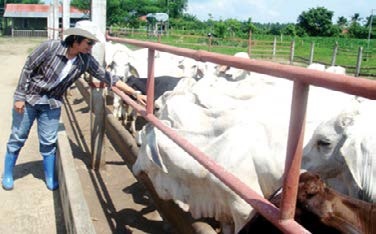 A novel investment scheme for a cow-calf operation designed especially for overseas Filipino workers (OFWs) is being offered by King Ranch, a successful beef cattle breeding and fattening operation in Batangas which is expanding to a 10,000-hectare farm in Palawan.

King Carlos, who is managing the ranch together with his father Alex, says that the project was particularly crafted for returning overseas workers, many of whom are returning home because of growing political tensions in the Middle East and elsewhere.

He cited the political tensions in Egypt as well as Syria which are displacing many of the workers there, forcing them to return to the Philippines without the assurance of a well-paying job. The other development that is causing serious concern is Saudization in Saudi Arabia. 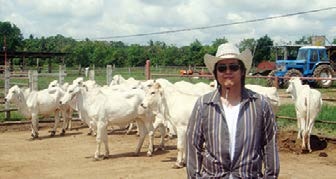 King Carlos in their Batangas ranch. They are also developing a big ranch in Coron,
Palawan.

Under the reintegration financing program, each OFW can borrow from P2 million to P10 million at an interest rate of 9-11% per annum, payable over 10 years. The loan program is said to be collateral-free and all that is required of the OFW is 10% equity.

The scheme offered by King Ranch calls for an investment of about P1,255,000 to pay for 12 ready-to-breed high-quality Brahman heifers and one bull. Aside from the breeding animals, the investment package includes pasture seeds, a start-up pen, and the necessary vaccines, medications, vitamins, and mineral supplements.

At the same time, Alex said that King Ranch will provide basic training for OFWs on topics like like animal handling, nutrition, and health management through seminars and farm visits.

Also, they will transfer new technologies like artificial insemination, new varieties/species of forage grasses and legumes, and future technological advances from other progressive countries. 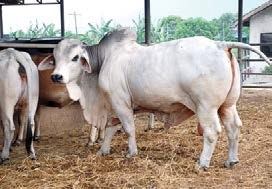 A purebred Brahman bull for breeding.

The OFW’s cow-calf operation project will need a small growing area because the animals will be confined. They will be fed with forage crops on a cut and carry basis. The green feeds consist largely of napier, Stylo grass, centrosema, and another legume vine popularly called Javanica.

Alex Carlos explained that their company started this investment program two years ago with an initial batch of OFW beneficiaries like Rio A. de Leon, who works in Singapore, and Dante Hernandez and German Noblejas, both working in the Kingdom of Saudi Arabia.

One good thing about the investment scheme is that King Ranch offers a buy-back arrangement for all the cattle produced by the participants. The price will be the same at the going price during the time that the raisers will sell their animals.

King Carlos said that usually, cattle raisers wait for their animals to become two to three years old before they sell. That’s because the animals will attain their best weight at that growing period.

Selling the animals earlier may not be as profitable as when they attain two to three years old.

King Carlos added that the purebred commercial Brahman animals weigh about 550 kilos at two years old and about 650 kilos at three years old. The current price of both heifers and bulls is P85 to P87 per kilo live weight. So a two-year-old animal could fetch, at current prices, about P46,750 to P47,850. 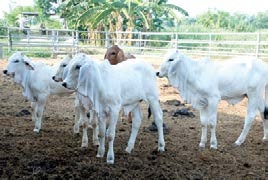 Young Brahman calves. In two years, they will weigh about 500 kilos and will fetch a price of more than P46,000.

Alex Carlos said that he has had initial talks with officials of the DBP and the result is very encouraging. The bank officials are Jose Pepito A. Yusingbo, manager, Program Development Unit II-MSME Unit, and Eleazar A. Reyes, assistant vice president and head, Business Development and Marketing Unit Center for Global Filipinos.

Alex said that the beef industry in the past decade has had slow growth for a number of reasons. He says there was a lack of government support in terms of genetic improvement, viable programs, and transfer of technology. Another major reason is the absence of land for cattle propagation and breeding purposes due to the land reform law instituted by previous presidents in which pasturelands were distributed to farmers.

However, with the advent of new technologies, particularly in feeds and plant breeding (forage crops), accompanied by modern management practices, cattle can now be raised commercially and profitably in a small land area through confined beef cattle breeding.

Thus it is possible for the Philippines in the long term to become self sufficient in beef and to become one of the major players in the cattle industry around Asia. The country could become a big exporter of boxed beef, feeder cattle, and high quality breeder stocks, especially since the Philippines has been declared FMD-free country wide.

For inquiries, you can email King Ranch at ark.carlos@yahoo.com.