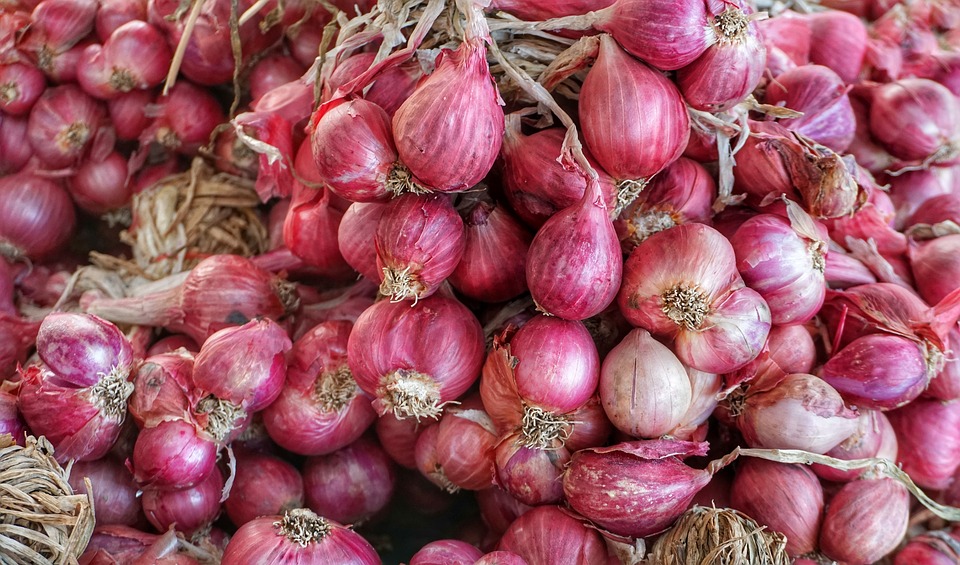 One’s first visit to Reynaldo C. Hilario’s farm in Talavera, Nueva Ecija’s Barangay Caaninaplahan can give rise to several misimpressions. For instance, the one-and-a half-hectare portion (of the 2.5-ha spread) devoted to vegetables and glutinous corn planted in 400 to 2,000-square meter (sq. m.) parcels can be mistaken for mere trial and/or experiment fields that may not result in hefty profits.

Another misapprehension visitors can have is that Hilaro is lucky that the Department of Agriculture’s (DA) Philippine Center for Post-harvest Development and Mechanization (PhilMech) built, on his farm, a prototype onion storage house to showcase the traditional “hanger” technology to onion farmers in and around Talavera. Or that his being the recipient of two rain shelter plastic-and-net houses from the DA’s High-Value Crops Development Program (HVCDP) for being Region 3’s outstanding HVC commercial grower in the 2011 Gawad Saka Awards was also just luck.

These misimpressions couldn’t be more wrong.

One of the rain shelters houses a PhilMech-supervised hot storage technology trial for onion bulbs that Hilario harvested more than three months ago in order to compare this method to costly cold storage for the benefit of small onion producers. The other polyvinyl chloride- (PVC) roofed shelter is a nursery for onion seedlings for off-season, a technology he has mastered which has enabled him to pocket substantial profits in the last two years. 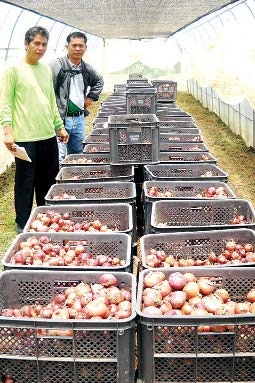 In the open, one notices the bamboo frames for rain shelter tunnels over individual plots, the bamboo still bare of plastic sheets because there’s no rain yet. The tunnels are small investments that enable him to reap big profits from his offseason crops. It begins to dawn on the visitor that the man is no ordinary marginal farmer.

In 2008, nine years after he retired from 17 years of regular employment as a boiler engineer with the National Power Corporation to be a full-time rice-and-vegetable farmer, the Central Luzon Agricultural Resources Research and Development Consortium (CLARRDEC) of the Department of Science and Technology’s Philippine Council for Agriculture, Forestry and Natural Resources Research and Development (DOST-PCARRD) bestowed on him the title of Farmer- Scientist for the successful innovative cropping methods that he shares with his fellow-farmers.

For assisting PhilMech researchers in conducting laboratory and field activities and in pilot-testing newly generated technologies, the agency chose Hilario as one of its outstanding partners in research and development during the celebration of Postharvest Loss Prevention Week last May 22, 2013 at the PHilMech headquarters in the Science City of Muñoz in Nueva Ecija.

While waiting for the seedlings of open-pollinated (OP) red and hybrid yellow onions in the rain shelters and tunneled plots comprising his nurseries to be transplantable, Hilario focuses on his money-makers. These are glutinous corn, squash, okra and sitao. The seeds of most of the varieties of these crops that he plants at present are those marketed by Allied Botanical Corporation (ABC).

The OP red onions are Golden State Red Express and Condor Super Creole, the two most-suitable varieties for off-season planting that are available in the seed market. The yellow hybrid is Nunhems’ Rio Bravo, the most-widely-grown Granex-type onion in Nueva Ecija. The glutinous corn is Max One F1, ABC’s newest variety of the cereal that bears large, uniformly-sized ears, while the squash is of the Condor SQ4 F1 variety with its semi-flat to flat, good-tasting fruits. His Max One planting area is 1,000 sqm in which he sowed about 6,000 seeds.

Of the okra varieties that he grows, Hilario is highly partial to ABC’s Condor Camiling Smooth for the long, spineless, uniformly-green fruits that it bears year-round, even if conditions are stressful. He grows four varieties of pole sitao, with three of these from ABC: the widely-popular and best-selling Negrostar with dark-green pods, the 4-star with medium green ones, and Maranaw, which bears light-green pods. These sitao varieties, all producing long pods, are of the high-quality Condor brand of seeds. Pole sitao occupies the largest area in his farm at present—2,000 sq. m. 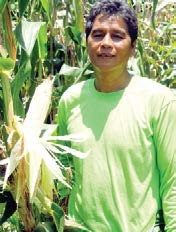 Hilario stands in his Condor Max One Hybrid Glutinous cornfield.

“I plant sitao varieties that each produce pods with a different color because most of the time, buyers want those that consumers prefer,” says Hilario. “But sometimes consumers are not sure what they want most, so why not give them choices?”

He sells most of his harvests to a neighbor who brings vegetables to Cabanatuan City’s Sangitan Market, which has become a veritable trading center for vegetables and fruits. Interestingly, for Hilario, attending to the purchase of packing materials, preparing the harvests for shipment, and transporting these to Cabanatuan are not the essential things to do. He would rather prepare squash to sell to small eateries and home cooks as the main ingredient of shrimp-calabasa ukoy, which is becoming increasingly popular among consumers in Pampanga, Bulacan, and Nueva Ecija.

“PhilMech loaned me a slicing-chipping machine for squash fruit,” Hilario says. “It’s a big help in disposing of my squash harvests, especially when prices of the vegetable are low… which is more often than not.” His present squash production area is only on 400 sq. m. but he projects his total harvest of the fruit for the season at not less than 2,000 kilograms.

Another vegetable that he produces for home-processing is papaya, which his wife prepares as high-quality achara and sells for a good price in Caaninaplahan to buyers who come for it.

Vermicompost is another highly-saleable product of the farm. Hilario sells the surplus of the organic fertilizer from his own use at P250 per sack. The fertilizer is his most important input because applying it judiciously to his plots enables him to innovate by increasing plant population densities without sacrificing livability and yield. Vermicompost also ensures that his nursery operations always result in high seed germination and high seedling survival rates, which is a major factor in the success of his crops.

To enable other farmers in Talavera to learn and benefit from the farmerscientist’s successful cropping practices, the Municipal Agriculture Office arranges and schedules regular visits for them to Hilario’s farm. He is honored and happy to accommodate his guests. After all, aside from his farm being a STBF demo site, he acknowledges that he owes all of his success and prosperity to his also being an avid seeker and learner of crop-production knowhow from seminars, techno-demos, and farm visits in the past. So, according to him, it’s just right that he gives back to other farmers some of the things that he got from his benefactors.