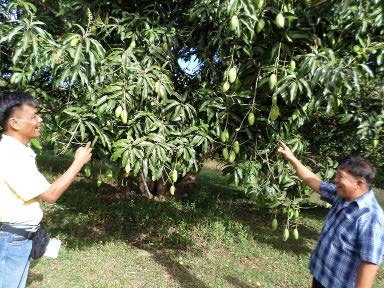 Would you believe that a very poor boy who had to work in a carton factory so he could study at night in a maritime school has become the Mango King of Ilocos Norte? Thanks to an unusual twist of fate, he didn’t become a seaman—and yes, he is now the reigning Mango King in the North.

He is Ricardo Tolentino, 54, born an illegitimate child in Piddig, Ilocos Norte. He was raised by his grandfather who supported his studies in high school.

Wanting to become a seaman, he enrolled in night classes at the Philippine Maritime Institute in Manila, while at the same time working in a die-cutting firm during the daytime to support his schooling.

He finished his maritime course, all right, but he did not care to board his ship. That’s because he met a mango exporter who had come to order cartons for his mango shipments from the company where Ric worked. He became a good friend of the mango exporter, who told him to go back to Ilocos Norte so he could buy mangoes for him. 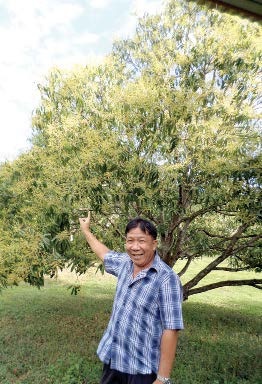 Carding Tolentino in front of his profusely flowering mango tree.

And that’s what Ric did. The mango exporter provided him with the money which he loaned to mango farmers so they could produce the fruits, which he assembled for his friend in Manila. That was in 1976.

In the earlier years, Ric said that they used to harvest about 1,000 kilos of fruits from each century-old tree. But because of the successive flower induction and forced fruiting by farmers without providing adequate fertilizers to the trees, the yield went down to just about 500 kilos per tree.

That worried him because, with the high cost of chemicals used in inducing flowering as well as pesticides to control insects and diseases, the farmers were losing money. That led him to propose to Gov. Imee Marcos a rehabilitation program for the mango industry so production could be improved and mango farming could become profitable.

The scheme simply required the application of fertilizers. The lady governor was ready to assist. She provided P5 million of provincial funds to subsidize the application of balanced fertilizer to about 20,000 of the 100,000 trees in the province. In the rehab program, each century-old tree was applied with 6 kilos of organic fertilizer, 4 kilos of complete (14-14-14), and two kilos of muriate of potash (0-0-60). The total cost of fertilizers applied per tree was about P230.

That has encouraged the lady governor to give a P2 million grant, which was matched with P3 million by the Department of Agriculture for fertilizer application in 2013. This was for another 20,000 trees in Ilocos Norte. Ric estimates that there are at least 100,000 mango trees in the province.

Through the years, Ric has about mastered the fine art of taking good care of mango trees so that they become productive on a sustained basis. In fact, he is contracting the
fruiting of other mango farmers’ trees not only in Ilocos Norte but also in Apayao and Cagayan. And unlike other contractors who don’t apply fertilizers to the trees they are inducing to flower, he applies the right technologies, especially balanced fertilization.

He now believes that mango production, despite the high cost of controlling pests and diseases, can be profitable. With the right technology, he says, high quality fruits can be produced which will fetch higher prices.

Ric confessed that GAP or good agricultural practices in mango production entails a lot of work but in the long run, the rewards are in the form of bigger profits. 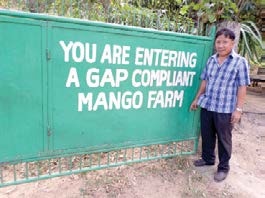 Tolentino stands by the gate of his GAP-compliant mango farm in Barit, Laoag City.

Before one of his farms was certified as GAP-compliant, he had to observe five steps for a period of three years. These are the five steps:

Step 1 involves soil analysis. This is important so that the farmer will know just what fertilizers to apply. In his case, his farm in Barit, Laoag City, was found to be rich in nitrogen; there was no need to apply urea, which is very expensive. So on 500 of his 20-year-old trees, he applied 10 bags of processed organic fertilizer and six bags of complete fertilizers on the onset of the rains.

Step 2 involves proper pruning. He did top pruning to open up the crown so that sunlight would reach the spreading branches that bore the fruits. The unnecessary branches were removed.

Step 3 involves the provision of garbage bins, toilets, and packing houses within the farm. And the farm has to be fenced to prevent the entry of farm animals and unauthorized persons.

Also, there has to be a storage house for farm tools and equipment, fertilizers, and crop protection products. The farm workers should have boots, long-sleeved work clothes, and masks when spraying and mixing chemicals.

There has to be a logbook for the daily activities of workers such as weeding, spraying, etc. The number of trees sprayed should be recorded, including the total amount of chemicals sprayed per tree and total harvest per tree, separating export-grade and processing grade.

Step 3 also involves bagging of the fruits. Ric has observed that 80 percent of bagged fruits are export grade while only 20 percent is processing grade.

Step 4 involves very careful harvesting. Only one fruit is picked at a time with the nylon harvester. Instead of the usual start of harvesting at 8 a.m., the recommended start is at 10 a.m. to minimize latex burn.

Once the basket is brought down from the tree, each fruit is individually removed from the basket and placed directly in the carton if the quality is okay.

Step 5 (the final step) is delivery of the harvest direct to the buyer in Manila, where the batch will still be classified in case there is damage on the way to the market.

Ric is also into vegetable growing, starting about two years ago with his friend Nestor Acosta as his adviser. Nestor is an experienced vegetable grower from Bacarra town.

At the time of our visit (Dec. 9) to his 8-hectare farm in a hilly barangay in Vintar town, his D’Max tomatoes planted on three-fourths of a hectare were heavily laden with ripening fruits. From this crop, he has already harvested three times, each time getting about 500 kilos, which he sold at P35 to P40 per kilo at farmgate. 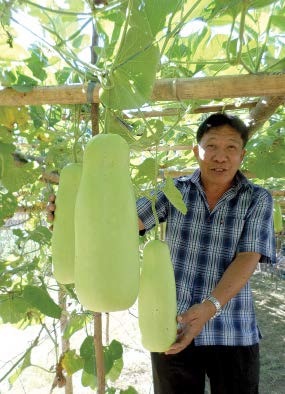 Upo is also a profitable crop for the Mango King Carding Tolentino.

The tomato crop is considered off-season. Despite the typhoons that visited Ilocos Norte previously, the tomatoes remained undamaged and have become productive.

Upo is also a favorite crop of Ric. He usually harvests every day or every two days, usually picking about 500 kilos each time. The Tambuli variety of upo from East West Seed is also very prolific. And the price at the time of our visit was a high P50 apiece.

The Morena eggplants he planted were just starting to flower at the time of our visit. He also expects to get a good price from this crop. He estimates he can get a farmgate price of P50 per kilo when harvest time comes.