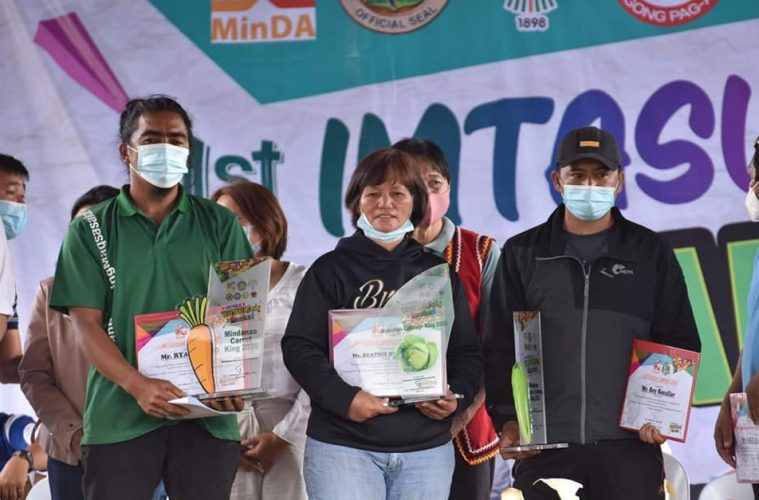 A lady farmer who is a migrant from the Cordilleras and a graduate of Agronomy were recognized on Saturday as the Cabbage Queen and Carrot King during the culmination event of the first-ever Mindanao Vegetable Derby held in Miarayon, Talakag, Bukidnon province Saturday.

In his Facebook post, Secretary Emmanuel Pinol, chairman of the Mindanao Development Authority (MinDA) said Beatriz Homonlay, a resident of Sumilao town in Bukidnon, “bested all other farmers, mostly men, producing the best quality Cabbage in the derby which started as early as July.”

Homonlay, Pinol said, is an Igorot farmer who “is one of the many Igorot farmers who settled in the highlands of Bukidnon and engaged in vegetable farming.”

“Homonlay partnered with East-West Seeds using the seeds and the farming technology of the company with the assistance of farm technicians,” Pinol said.

Meanwhile, Pinol said Ryan Danio, a graduate of Agronomy, was recognized as the MinDA Carrot King 2020 after “harvesting 22.4-metric tons of quality Carrots per hectare posting an estimated income of P1.1-million in less than four months.”

The other awardees were Rey Resullar, who received the Ombok (roundhead cabbage) King 2020 award and Raul Jamito, who received a special award for Best Farmer Cooperator for Champion Crops.
Each of the winners received trophies, certificates and 15 cu.ft. home refrigerator donated by Sanden Cold Chain Systems Phils.

The 1st Mindanao Vegetable Derby is a project of the MinDA, the Provincial Government of Bukidnon and the local government units of Impasugong, Talakag, Sumilao and Lantapan. The program was launched in July this year.

“The seed companies provided the seeds and technicians who guided their farmer-cooperators on proper farming techniques focusing on healthy and good agricultural practices,” Pinol said.

The program is supported by the Provincial Government of Bukidnon and the Department of Agriculture. It aims to improve the quality and quantity of vegetables produced in Mindanao.

Pinol added that a similar activity will be held “in other vegetable production areas of Mindanao next year.”