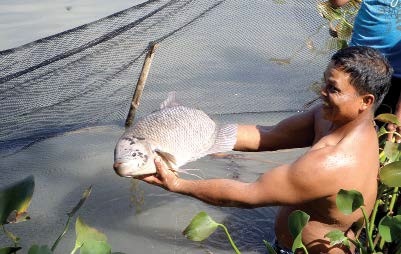 Catching the Giant Gourami with a net.

One interesting person we met in Solsona town is a 49-year-old civil engineer who is the general manager of the Ilocos Norte Water District.

And that’s exactly what we did on December 8. We witnessed the catching of the fish in his fishpond, which was then immediately cooked into a sumptuous sinigang. There was also tilapia that easily weighed almost a kilo growing in the same pond. Some were caught and broiled for our noonday feast. 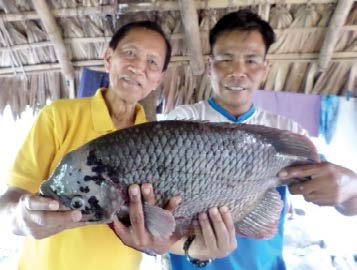 Zac B. Sarian and RJ Pinera show off a big fish, 18 inches long.

John also wanted Gov. Imee Marcos to taste the giant gourami, so a big portion of the fish was reserved for the lunch that was scheduled for the lady governor in the farm of Carding Tolentino in Vintar town.

The giant gourami really tasted very good. What makes us wonder is why this fish has not been multiplied commercially. In Solsona, there are just a few farmers who have a few pieces of giant gourami in their ponds.

John related that his late grandfather, Felicisimo Manuel, had a lot of giant gourami in his fishpond as early as in the 1960s. In the late 1970s, there was a severe drought in Solsona, so the stocks of his lolo were brought to a place in the town where there was spring water. There, the giant gourami multiplied in big numbers.

A few years later, when there was no more drought in his lolo’s place, some of the giant gourami were retrieved. However, there were many that were left behind. When John’s grandfather died, there was practically nobody among his heirs who took care of the fish.

It was only in 1997 that John became interested in culturing giant gourami, but only for consumption at first. He bought 30 pieces at P60 apiece and stocked them in his fishpond. Most of the original stock have died or have been eaten and as of today, there are only six left.

John estimates, however, that he has more than a hundred junior giant gourami in one of his ponds. And then there are 45 that are about 16 inches long in a small pond near his house.

John has 200 mango trees that are eight years old and ready for commercial production. He has asked Carding Tolentino, the Mango King, to do the spraying for fruit production.

John does not really expect to make a lot of money from his mango trees and his giant gourami. But he has another project that is the real moneymaker – a nursery of mahogany trees and landscaping ornamentals. 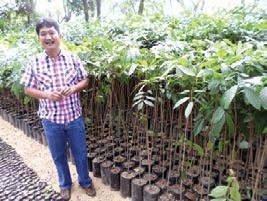 In 2009, John thought of starting a nursery to produce forest tree seedlings and landscaping materials. He thought there would be a lot of requirements for reforestation and beautification in the province so he started his nursery in a big way.

Right now, he is utilizing 1.5 hectares for growing seedlings and cuttings in Brgy. Maan-anteng, Solsona. He has in stock 30,000 mahogany saplings that are 4-5 feet tall and 120,000 that are two feet tall.

He has been able to sell a lot of his mahogany seedlings already. One of his big buyers is the Ilocos Norte Electric Cooperative, which has bought 120,000 mahogany seedlings worth P2.2 million. There are also private planters who are sourcing their planting materials from him.

He himself has planted a small parcel of land as his own showcase of a mahogany plantation. If he will not be able to sell the overgrown trees in his nursery, he said he will just buy more hilly land for his own plantation.

Right now, John has in stock some 60,000 ready-to-plant bougainvilleas. A landscaper from Batac City has already started buying his bougainvillea requirements from John. But the bigger buyer could be the provincial government itself. It is said that Gov. Marcos is serious about beautifying the roadsides throughout the province with floriferous bougainvilleas.

John is also propagating a lot of Bayog bamboo, which is highly suitable for planting in riverbanks and sloping areas for erosion control. He already has 1,500 plantable propagations of Bayog.

Other plants that he is propagating in big numbers are cashew, duhat, narra, betel nut, kamansi, bittaog, and agoho.

What farmers want for Christmas: Local and national support for agriculture empowerment