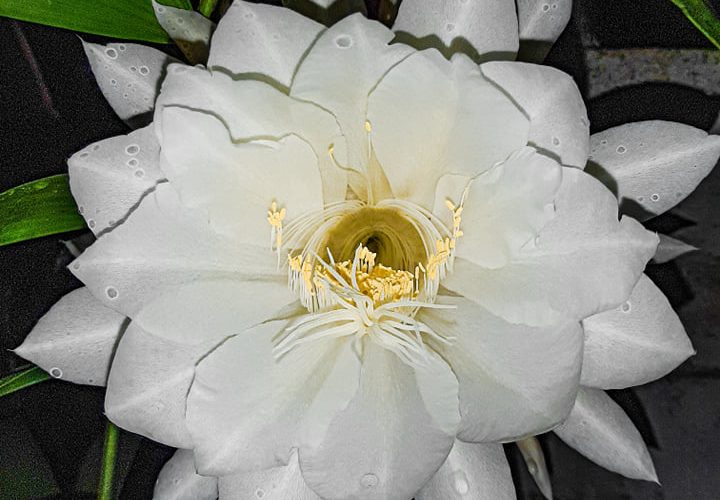 The Queen of the Night is an orchid cacti that has delicate, sweet-smelling, white blooms.

The Queen of the Night (Epiphyllum oxypetalum) is a special kind of orchid cactus that is suitable for night owl gardeners. As its name implies, the Queen of the Night blooms between dusk to dawn and steals the scene with its delicate, white flowers that give off a sweet aroma.

Originally from the tropical rainforests of Mexico, the Queen of the Night grows in treetops, and lives on the surface of other plants.

As a cactus that hails from jungles, the Queen of the Night has stolen the ornamental scene and has become a favorite of gardeners because of its undemanding, yet highly rewarding nature. 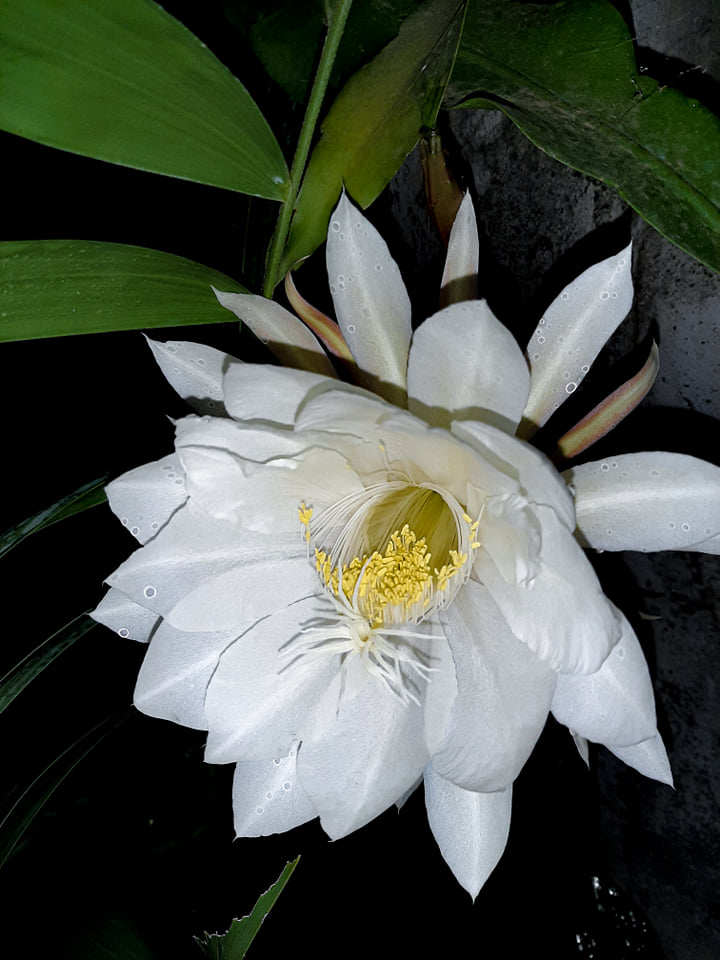 Queen of the Nights mostly bloom from dusk to dawn.

John Henry C. Griñen, a data analyst and encoder for the Sugarcane Farmers of Bukidnon – Multi-purpose Cooperative (SFB-MPC) is one such gardener who has taken an interest in the nocturnal plant.

Griñen added that the plant can bloom everyday or for at least 15 days or so.

Caring for the Queen

Since Griñen started growing the nocturnal plant via cuttings, here are some tips that he himself applied when maintaining the Queen of the Night.

“If you start from cuttings, never water it for a whole week.  Misting is fine so that it won’t be dehydrated. Just plant it in a pot like you normally would, and let it bathe in full sunlight. Once it has its roots established, you can water  it regularly Like a regular plant,” he said. 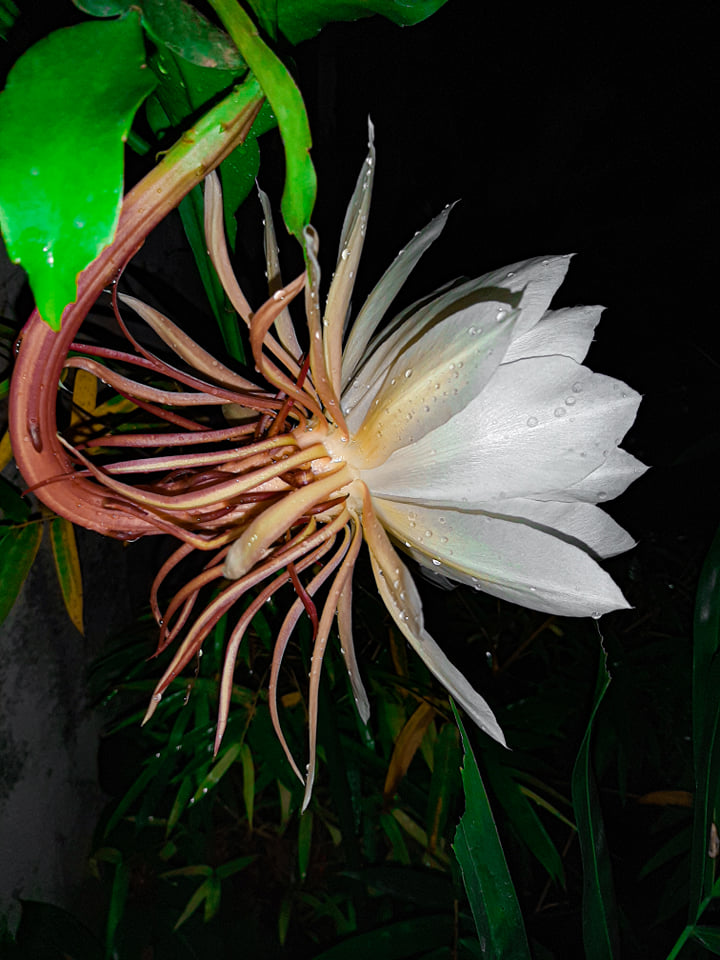 According to Griñen, this nocturnal plant isn’t as hard to care for as some would imagine.

As a cactus, the Queen of the Night can tolerate full sun.

Griñen added that the Queen of the Night has no specific potting medium, making it a great plant for beginners.

“[But] if you ever want to plant it on a pot, make sure you can provide a fast draining medium. You can do this by  incorporating chunks of charcoal on your regular potting mix,” he said.

He added that gardeners should use the right pot size as that is the rule of thumb when planting potted plants. Another option is you can grow them outdoors, and planted directly on the soil.

“This plant also likes to climb so you can plant them near a wall. Or you can just put some coco pole beside it. I let mine climb near a fence,” Griñen said.

Lastly, he said that the plant can still do well even without fertilizer.

Returning to his passion

Griñen started collecting plants in 2002 when he was just an elementary student. His hobby began when his mother would always take him to Bukidnon’s annual Kaamulan Festival  which celebrates the customs and traditions of the seven tribal groups that originally inhabited the province. 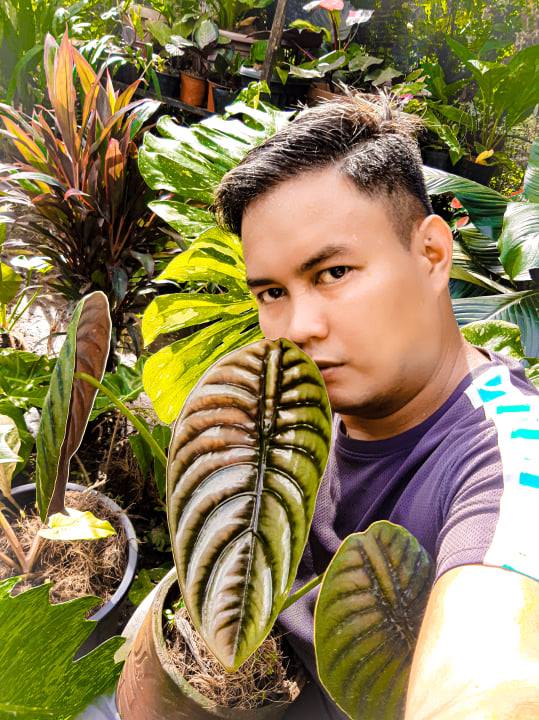 Henry Griñen posing with one of the plants from his collection.

He shared that they would always go to the plant display first where they spend hours just appreciating the displays of each plant seller there.

But he wasn’t able to maintain his collection in his youth. When he started college in Iloilo, he had to give up his passion since he knew that no one would be able to care for his plant babies for him.

This didn’t deter him from his love plants as he later vowed to himself that he would one day return to what he loves even if it means starting all over again.

He rekindled his passion for collecting plants but focused on a different category: aroids.

“Right now, I am concentrating on collecting aroids like alocasias, anthuriums, philodendrons, monsteras, and aglaonemas. But I specifically love Alocasias. These are also some of the plants I normally sell online,” Griñen said.

Like Griñen, many other plant collectors are becoming more interested in the Queen of the Night. Not only is it an easy to maintain plant because of it being a cacti, but it also provides beautiful blooms that will surely fascinate anyone.