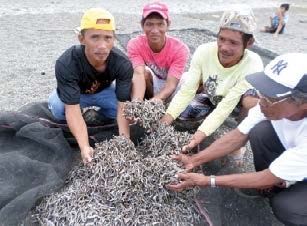 Kagawad Sherman Valdez (left) and fellow fishers show off the newly dried dilis they caught earlier in the day. They are recipients of fishnets from Gov. Imee Marcos and the Department of Labor and Employment.

Badoc is the southernmost town of Ilocos Norte. Many coastal residents are small fishermen.

Sheman Valdez, a kagawad and president of the local fisherfolk association, was most thankful to Gov. Imee Marcos who gave them a fishing net in 2012 worth about P260,000. This led them to form a cooperative. And after that, they were able to secure two more fishing nets from the Department of Labor and Employment.

With the fishing nets, they can catch more fish and are able to provide livelihood to more people, including non-members of the cooperative.

During our visit, they were able to catch more than 400 cans of dilis (each can weighing 17.5 kilos). The people who participate in pulling the net to the shore get a share of the catch. As many as 200 people may be involved in pulling the fishnet.

Australian teen makes a ballgown out of mango seeds