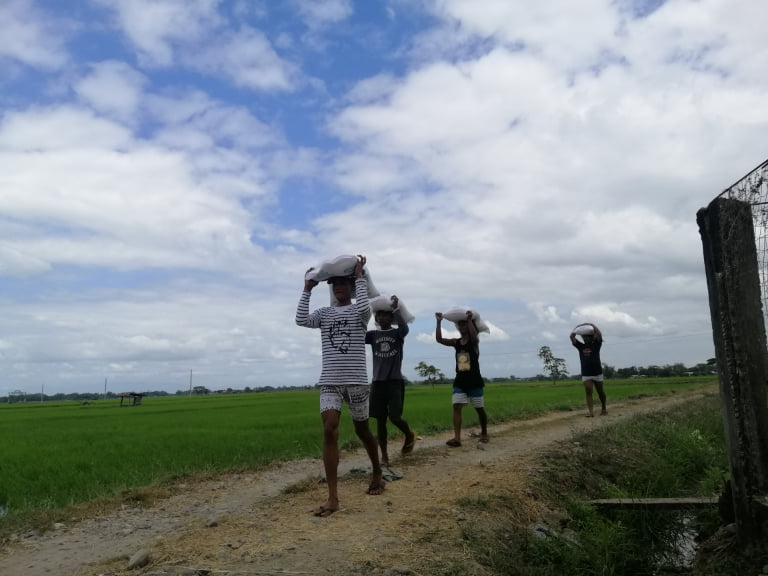 Seeing the hard work that rice farmers from Licab, Nueva Ecija put in in harvesting and marketing their produce, the Gaspar couple started an advocacy to empower these farmers.

Rice farmers are among the most marginalized communities in the country. Not only do they have limited access to the market where they can sell their goods, and when they do, they don’t often receive fair compensation for it.

Gy Gaspar, a nursing graduate and housewife from Licab, Nueva Ecija, is aware of the unfortunate treatments of rice farmers as she sees it firsthand by being married to one.

“My husband, Jan Gaspar, is a native farmer from the town of Licab. During my stay there, I saw what ails some of the rice farmers and saw a good opportunity to help them market their produce and generate good income,” she said. 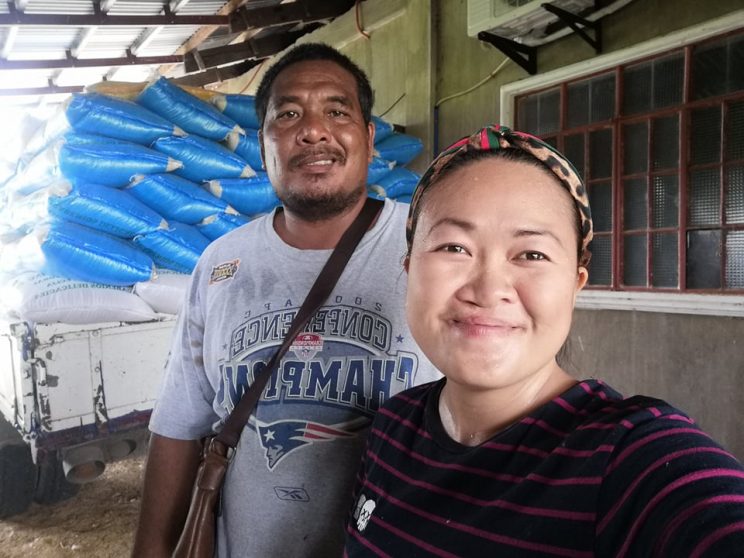 Gy Gaspar, a nursing graduate, aims to empower their local farmers by helping them market their produce.

In 2013, she started Licab Rice, an advocacy and brand named after the town to help raise awareness of the farmers’ plight in their community as well those nearby.

The beginnings of an advocacy

Gaspar and her husband, who still grows rice himself, began their advocacy of helping other rice farmers by buying their newly harvested rice as soon as they finish the drying and husking process.

She believes that freshly harvested rice tastes better since it’s free from any additives that could affect its taste and content.

“At that time, they [the farmers] weren’t bringing their produce to the town proper so it was up to my husband and me to go where they are just so we can bring their rice to the market,” Gaspar said. 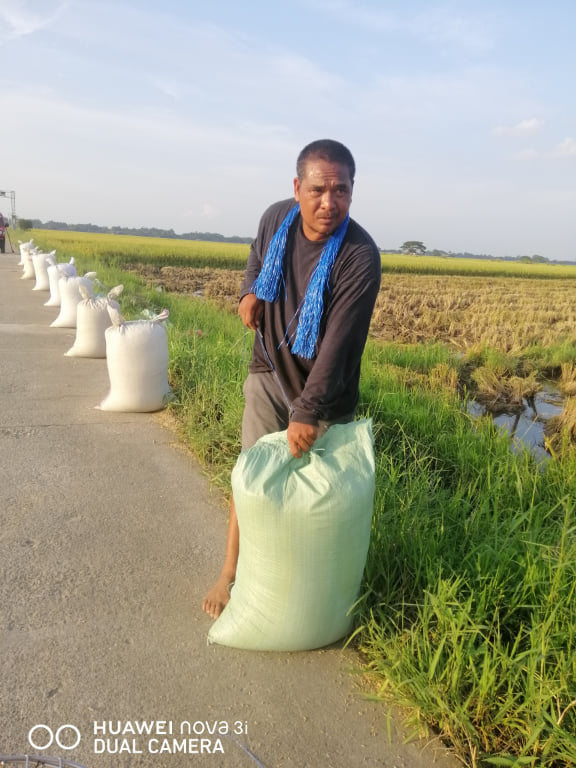 Rice from the Licabenio farmers are sent to the town proper where it is sold to consumers.

Using their old hand tractor, Gaspar and her husband make rounds in the town proper so that consumers can have a taste of newly harvested rice that comes from the farmers from their own region.

“I started promoting the advocacy of raising awareness about our Licabenio farmers so that others will advocate local produce for them to have a taste of fresh, untampered rice right at their own table,” Gaspar said.

How the rice farmers grow their produce

When it comes to growing rice, Jan said that they use the traditional practice of direct seeding, or sabog tanim, where pre-germinated seeds are sown onto a thoroughly plowed and harrowed field.

Land preparation begins after the previous harvesting period. This is done to control weeds and soil development. It usually takes three to four weeks of preparation before the land will be ready for planting.

Direct seeding costs less time and money for farmers as seeds cost less than seedlings and also less laborious as compared to transplanting.

Gaspar added that they maintain their rice crops by carefully applying fertilizer to help in its growth. As much as possible, they try to stay away from commercial fertilizers so that the produce will come out as naturally as possible.

90 days after planting, the rice will be ready for harvesting before it is dried out under the sun. Shortly after the drying process, the dried harvested rice will then be milled so it can be ready for the market.

Gaining the support of their LGU

When they first carried out their plans, Gaspar admitted that it wasn’t an easy thing to do. But she believed that there’s nothing easy in life, it’s just a matter of loving what you’ve started and what you’re doing.

“Even if I have to wait under the heat of the sun just waiting for the farmers to give me their produce, I never lose hope that one day they will learn how to market their own rice,” the nursing graduate said.

It didn’t take long before the farmers from Licab, Nueva Ecija and the efforts of Gaspar gained recognition from their fellow townsmen and their local government unit. 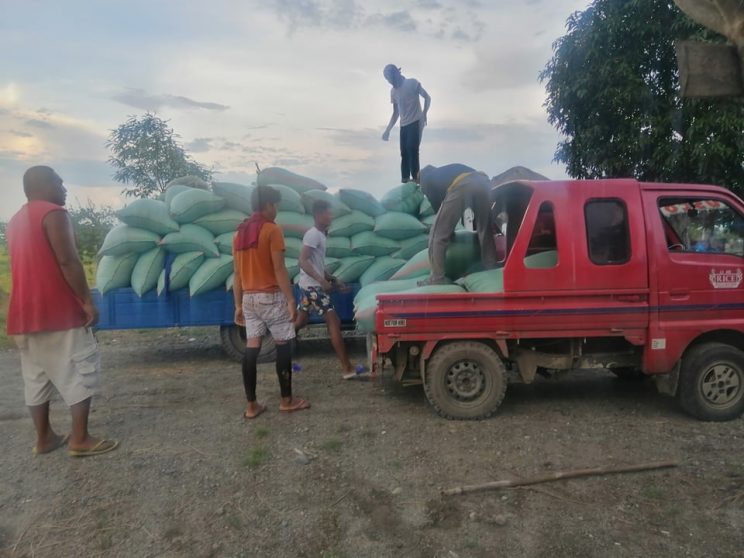 Over time, the local government unit of Licab recognized the Gaspars advocacy and has helped them promote rice from their farmers.

With the support of Mayor Femy Domingo of Nueva Ecija, the rice that Gaspar and her husband marketed on their own became known in the area. The produce has even been allowed to be milled in town proper and named after the town of Licab.

“Eventually, our advocacy helped the rice from Licab to be known not only in our own town but to nearby areas as well. We have reached Manila, Cavite, Laguna, Pampanga, and Pangasinan in marketing Licabenio rice,” Gaspar said.

Now, she firmly believes that there’s nothing impossible when it comes to achieving dreams as long as it’s partnered with hard work, and a positive attitude.

To further help the farmers earn more from their produce, the nursing graduate turned to value-processing and encouraged the production of coffee rice and rice wine that Licab has now been known for.

Other than being advantageous in terms of income generation, Gaspar decided to convert the rice into coffee and wine because of the health benefits it has for its consumers.

Using her background in medicine, she discovered that rice coffee has a lower calorie count and is gluten-free as compared to the usual blend. On the other hand, rice wine, also known as tapuey, has less adverse effects than its commercial counterparts.

“Seeing smiles from the people I helped starting from drying rice to repacking coffee so they could earn a favorable income makes all my sacrifices and hard work worthwhile. From Luzon, our products have reached Visayas, Mindanao, and even foreign countries like the United Arab Emirates,” Gaspar said.

In the future, the nursing graduate hopes that the next generations will continue the advocacy that she has started and that the products of the Licab rice farmers will be known in other areas around the world.

Gaspar is an example that even though she might not be initially inclined to agriculture in the first place because of her degree, she has still found it in her heart to help her fellow Licabenios in creating a good source of income that will make them known not just in the province of Nueva Ecjia, but also in other areas around the Philippines as well as the world.