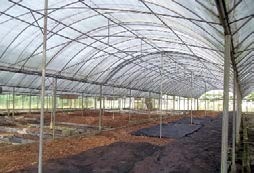 Vermi beds in a greenhouse.

While attending the recent Third International Symposium on Vermi Technologies at Lipa City, Batangas, we were introduced to the Vermi Kingdom of Kahariam Farms, a sprawling 23-hectare organic agriculture center and eco-tourism park.

Owned and operated by Kahariam Farms and Realty, Inc., headed by Manuel “Nonong” Bagatsing, the estate has not only been certified as an organic farm by the Organic Certification Center of the Philippines, it has also been acknowledged as the only producer of certified organic rice seeds in Southeast Asia.

The name ‘Kahariam’ was derived from Bagatsing’s and his children’s first names. “This place used to be a racing horse farm,” says Bagatsing, son of Ramon Bagatsing, the late former mayor of Manila. “When we decided to go into organic farming in 2007, we already had what it took to produce organic food,” he added, saying that a healthy environment and the avoidance of harmful chemicals are essential for raising thoroughbred horses. 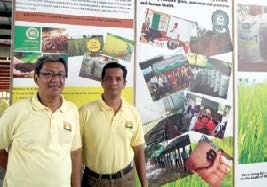 “We started growing high-value vegetables in polybags inside greenhouses,” Bagatsing relates. “We first applied organic culture technology using EM from a friend in Negros Occidental and later adopted the vermicomposting technology with the African nightcrawler.”

There are nine greenhouses with areas of 400 to 420 square meters each on the farm. Earthworm beds lined with concrete hollow blocks are now used for the production of vermicompost and worms in the greenhouses.

According to Kahariam farm manager Danny Bagatsing, Nonong’s nephew, the organic materials used for vermicomposting are horse manure and rice straw. “We get around six tons of horse manure everyday from about 20 horse farms in Batangas and use the rice straw from our farm,” Danny says. Kahariam got its first 40 kilos of African nightcrawlers (ANC) from the Center for Rural Technology Development in Calauan, Laguna and a private source. Technical assistance was provided by Dr. Joel Adorada of the Bureau of Plant Industry.

Old or pre-fermented horse manure and rice straw are placed in the worm beds by “layering” or the piling of alternate layers of manure and rice straw. Fresh manure should be fermented before it is used in the beds, Danny advises. The ANC is stocked at 1 kilogram per square meter (kg/m2) of bed with 100 kilos of the substrate. Watering the beds is done to keep the moisture content at 80%, ideal for good production.

“We harvest 60 kilos of vermicompost and 2 to 3 kilos of worms from every square meter of bed after 2 to 3 months of culture,” Danny explains. The vermicompost and ANC are separated by a mechanical trommel (vermi sorter) in a processing shed. The
vermicompost is then further processed into vermicast, which is registered with the Fertilizer and Pesticide Authority as an organic fertilizer and sells for P400 per 50-kg bag. “Our biggest buyer is the Department of Agriculture, which disseminates it to local government units and farmers’ associations in support of the national government’s organic agriculture program,” says Bagatsing. The harvested worms are stocked in new beds or sold to other growers at P500 per kilo. 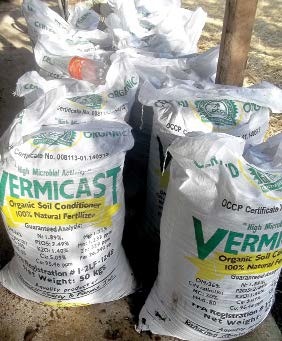 Undeniably, the “Vermi Kingdom” of Kahariam is the largest operation of its kind in the country; its one-hectare vermi farm has an estimated 10 tons of ANC, and its production capacity is about 4 tons of vermicast per day. In producing organic rice of the RC 18, RC 180, and Philippine aromatic rice varieties, the farm obtains a yield of 6 tons per hectare per crop.

For fertilization and insect control, a basal application of vermicast at 30 bags per hectare is done then followed with a weekly foliar application of vermi tea at 200 liters per hectare starting from the week-old transplanted rice seedlings until the grain hardening stage. Vermi tea is the water extract of vermicompost, which is prepared by mixing three kilos of vermicast and two liters of molasses or two kilos of brown sugar with 200 liters of water. This is then “brewed” with artificial aeration for 24 hours to increase the concentration of beneficial microorganisms.

Kahariam regularly conducts training sessions and seminars on organic rice seed production and organic agriculture for extension workers of the Department of Agriculture and local government units. It has well-furnished facilities that include lecture rooms, a laboratory, and dormitories. In addition to organic rice and vegetables, it also produces organic free-range chickens, fish, and fruits, which are cooked for visitors.

For more information on the Vermi Kingdom, readers may visit the website of Kahariam.

They developed their farm with their own funds