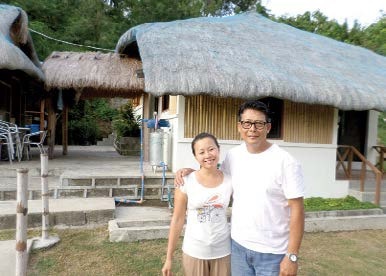 Bernard and Huyen Arriola in front of their farm house.

They developed their farm with their own funds

Many professionals dream of having their own farm someday. A good number start their projects years before they finally retire from their work or business. They really want to stay on the farm for their own good health and peace of mind.

One husband and wife we met recently had a practical way of going about starting their own dream farm. They are Bernard Arriola, long employed in the oil and gas industry, and Huyen, a Vietnamese woman who worked with him and who became his wife seven years ago.

In 2010 they bought a four-hectare sloping brushland in Brgy. Paagan, Bacnotan, La Union, that they are developing into their dream farm with their own funds. Their strategy, according to Bernard, is not to borrow any money from banks or other sources. They will only use whatever savings they have so that they don’t have to worry about repaying borrowed funds in case of a financial crisis in the country or internationally. They are aware that amortizing a big loan can be financially and mentally devastating—something they don’t want to have to deal with in their retirement years. 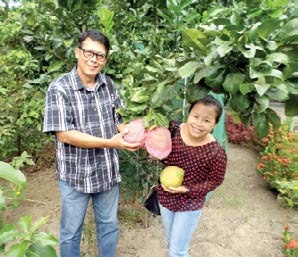 Bernard and Huyen visit other successful farmers’ farms to get ideas they can
adopt on their own farm.

Bernard is very fortunate because Huyen, who comes from the northern part of Vietnam, is a lover of plants and farm animals. So when they bought the property, she readily relinquished her job so she could oversee the farm while her husband is busy in his head office in Singapore as well as in project sites in China and elsewhere.

The good thing about Bernard’s work is that it does not only pay well, it also provides him a lot of vacation days. For every two months that he works in his office, he also gets a vacation of two months. This gives him enough time to do his own farming together with his wife.

‘Starting small’ is their guide phrase, so when they thought of planting Red Lady papaya, they just started with a hundred seedlings. They were so successful in their small papaya project that they immediately expanded. For the next two years, they got very good harvests and also a very good price for their fruits. 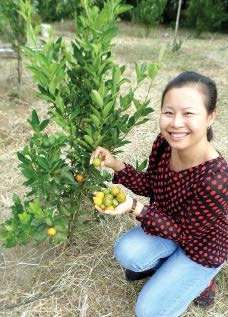 Huyen poses with young Tomboy calamansi at the Legata Farm. The Arriolas have started planting this variety on their farm in Bacnotan.

Unfortunately, three successive strong typhoons devastated their plantation in 2013, so that they had to temporarily halt their papaya production. But they started on another very promising project: raising free-range chickens, using a fast-growing breed from Europe. Like with their papaya project, they also started very small – just a hundred chicks. It did not take them long to master the technique of raising the chickens, so in no time, they increased their flock to a thousand birds. They harvest the chickens every 70 days, and there is a ready buyer for all they can produce.

And then they started again with a small number of chicks for egg production. Now, they think there is a bright future for producing brown eggs because they can sell the eggs at P8 apiece to a well-known meat shop. That is much higher than the usual price of the white egg, which is P4 or P5 apiece, depending on the size.

There are many other things the Arriola couple would like to develop on their farm. What is good about their farm is that there is abundant supply of water from a spring. At the highest point of their property, they have put up a big tank so that watering the plants is by gravity.

Their next agenda is to plant special fruit trees that include pomelo, guyabano, rambutan, and avocado. As usual, they are careful in selecting the varieties that they are planting. That is why they recently visited the fruit farm of a friend, Froilan Legata, in Paniqui, Tarlac.

They have now bought several grafted ‘tomboy’ calamansi, which produces big and juicy
fruits. The next thing they will be planting this January is pummelo, including the Vietnamese varieties with white and pink flesh. These produce bigger fruits than the Magallanes variety from Davao, and their flesh readily separates from the skin.

They will also be planting high-value vegetables for home use as well as for the market. Huyen loves gardening, and for home use, she has planted a plot of ginger, okra, camote for shoot production, mustard, and others.

They are also planting forest trees like mahogany so their farm can be environmentally balanced.

Overall, their strategy of not borrowing funds for developing their own farm is admirable. Also, starting small in every project they undertake is smart. Going around to visit successful farms is another strategy that will pay dividends in the long run.