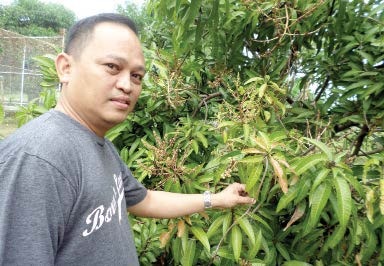 Froilan ‘Froy’ Legata and developing fruitlets of his Bowen mango from Australia.

Meet Froilan Legata, 46, an engineer-businessman in the hydraulics business who is into farming, not necessarily for money.

He is really farming for the love of it. More important than money is the satisfaction that he gets from seeing fruits and vegetables grow, as well as from raising animals.

For him, farming is an escape from the hassles of business. He reveals that the hydraulics business, which he specializes in, is financially rewarding, but there are a lot of hassles along the way. 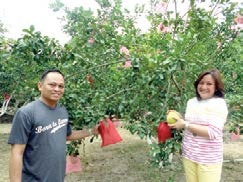 The hydraulics technology has many applications in the automation of many different processes in the steel industry, rubber processing, plastic manufacturing, marine fishing, mining, and even in the steering of yachts.

Froilan says that he himself studies the problems in a certain industry and designs the applicable system solution. His company is into turnkey projects, installation, maintenance, consultancy, training, troubleshooting, and the repair of hydraulic systems.

He says he went into farming in 2006 so that he could unwind after a hectic period in his business.

Agriculture, he says, is his special love. In fact, when he was in college, he was determined to enroll at the University of the Philippines in Los Baños but his parents dissuaded him from doing so. So he enrolled in Electronics and Communication Engineering at the University of Sto. Tomas instead.

In hindsight, he now says that it is providential that he took up engineering, which enabled him to put up his own company. “If I took up agriculture, I am not sure I would be able to buy the 10 hectares I am farming now,” he says.

In the beginning, he just bought 7,000 square meters for P175,000. It did not take long for him to buy the adjacent properties in Brgy. Ventenilla, where he now grows his fruit trees on 5 hectares.

His first main crop was Red Lady papaya, which was intercropped with the young mango trees that he planted. The papayas, he said, produced a lot of fruits. He did not
sell them, however; Froilan enjoyed giving away his harvests to friends and relatives. There was a time when he would harvest trailer-loads of ripe papayas—all of which were given away to friends.

He is also very proud of his imported mangoes like Golden Queen, Nam Dok Mai, Chokanan, Eating Green, and Bowen. He is particularly proud of his Golden Queen mangoes, which have become very productive. Last year, he harvested a trailer-load of Golden Queens, which he also gave away to his acquaintances and visitors.

Among the fruitful trees he has at the moment is the Tomboy calamansi, which produces big fruits that are very juicy. 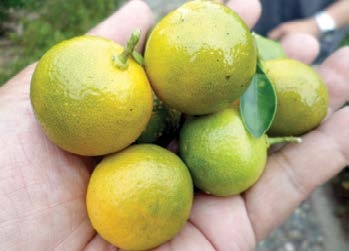 Close up of Tomboy calamansi fruits.

On his other 5-hectare farm, Froilan plants many mahogany trees along its periphery.

Lately, he has started raising native pigs and chickens. In all likelihood, those will not be for sale also. They could be for feasting with friends right on the farm. Froilan loves eating, especially the authentic pinakbet that his friend Exequiel Austria cooks for him and his visitors.

His goal now is to be on the farm four days a week, and to stay in the office for three days. Of course, he can do that with trained personnel that will keep the hydraulic business thriving and profitable.

The importance of producing food without destroying forests and biodiversity