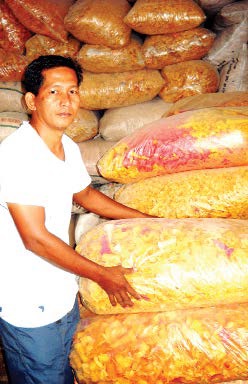 Enrico Fojas shows some of the stored stale and scrap materials that their mini-mill turns into “cookie” feed for bangus and hogs.

Improving an innovation pays off for young agri-entrepreneur

A young Bulakenyo entrepreneur who improved an innovation for producing fish and hog feed is the 2013 National Winner of the prestigious Citi Microentrepreneurship Awards (CMA).

Enrico S. Fojas received a P200,000 cash prize while the regional awardees each got R100,000. The four winners are also entitled to four weeks of entrepreneurship training and small business advisory and coaching sessions at Citibank’s Microenterprise Development Center and the Bayan Academy for Social Entrepreneurship and Human Resources Development. The winners received their prizes in an awarding ceremony held recently at the Bangko Sentral ng Pilipinas (BSP) in Manila.

In 2011, Fojas borrowed P5,000 from the Urban Program for Livelihood Finance and Training to invest as share capital in his older brother Simon’s business of procuring and distributing feed ingredients to small and medium-scale bangus farms and piggeries in their province. The younger man thought of making their enterprise more profitable by putting up a mini-feed mill for producing a type of feed for bangus and hogs—something a few innovators in Bulacan were then doing. The producers and users called the feed ‘cookies’. Fojas convinced his brother to buy a mixer and a small hammermill for the project. 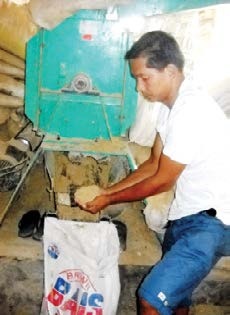 The young entrepreneur examines finished “cookie” feed from the small hammermill in their factory in Brgy. San Nicolas, Hagonoy, Bulacan.

Among the materials that the brothers supplied to bangus raisers was stale bread from bakeries which was no longer suitable for sale to consumers. Bangus farmers in Hagonoy and neighboring towns in northwestern Bulacan, where fish production is the primary industry, would feed the stale bread to their fish a few days before harvesting these, which ensured the bangus were full and well fed. ‘Cookie’ makers mixed the bread with readily available ingredients like copra meal to produce a feed with a protein content of eight to 10 percent for fish and hogs.

Fojas improved on the innovative feed product by making use of other stale and scrap materials from biscuit factories, pasta manufacturers, and even doughnut makers in addition to the stale bread from bakeries. The venture is now a million-peso business employing 21 workers who work two shifts daily so that it can cater to the brisk demand for the cookie feed.

The mill’s workers dry the stale and scrap bread, biscuits, doughnuts, and pasta, then spread these in layers before putting these in the mixer with the added ingredients. From the mixer, the materials go to the hammermill to be finished into cookie feed.

“Bangus farmers use our cookie feed for their fingerlings,” says Fojas. “They do this until the young fish are 10 to 12 centimeters long then they gradually mix commercial feed until they discard the cookie altogether during the growing period. After that, they shift to a finishing formulation. According to them, they save up to 35 percent on their total feed costs with the use of cookie feed. Commercial bangus starter feed costs R25 per kilogram while our cookie feed is only P8 per kilo.”

On the other hand, he says, hog farmers use cookies during the growing period of their fatteners then gradually shift to commercial feed for their operations’ finishing stage. Today, the younger Fojas is the sole manager of the cookie operations; this enables his older brother, the venture’s majority shareholder, to focus on another business. The cookie mill occupies a small rented building that used to be a garment factory in Hagonoy’s Barangay San Nicolas.

In his acceptance speech on behalf of the other winners during the CMA presentation at the BSP, Fojas attributed the cookie feed venture’s success to two things he is deeply concerned about: the environment, and the welfare of people, especially those working for him.

“What we’re doing is not unlike what the Department of Agriculture wants our farmers to practice in organic farming—making good use of farm wastes that can be turned to inexpensive fertilizer for crops,” he says. “We also utilize materials that would otherwise be just waste to produce a cost-saving feed for the benefit of aquaculturists and hog raisers.”

He also stressed the importance of treating workers well so that they will be loyal, happy, and willing to do their work conscientiously. For him, a successful business brings not only profitability but also the ability to help other people improve their lives.

About the Citi Microentrepreneurship Awards

Citibank Philippines, the Bangko Sentral ng Pilipinas (BSP), the Microfinance Council of the Philippines, and Citi Foundation have been holding the CMA, an annual recognition-and-reward activity that aims to increase awareness of micro-finance, provide incentives to Filipino micro-entrepreneurs, and recognize the micro-lending institutions that help them grow their business ventures.

Ex-overseas worker Cleto turned her sari-sari store in Baguilin, La Union into a diversified business that includes soft-broom-making. Paller runs a popular talaba roadside eatery in Passi, Iloilo, while Davao City resident Ty owns a mountaineering gear-and-apparel-making venture. They all started their businesses with the assistance of micro-lending institutions in their respective localities.

The CMA also honored three past awardees who have successfully sustained their businesses: Jennilyn Antonio of Mabitac, Laguna; Rosario Caparas of Biñan, Laguna; and Ma. Guidella Argabio of Calatrava, Negros Occidental. A former factory worker, Antonio runs a peanut butter-making venture, while Caparas has a million-peso buchi business with 25 outlets in her province. Argabio is a former sugarcane plantation worker who now manages a farm and a trucking business. As with the 2013 CMA winners, micro-lenders helped them start their ventures.