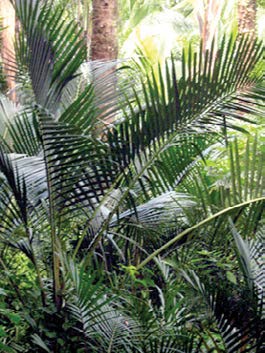 Researchers from Aklan State University (ASU) in Aklan and the Visayas State University (VSU) in Leyte are set to develop a package of technologies for the propagation of Sago palm (Metroxylon sagu) in terms of nursery and plantation establishment using suckers and wildlings.

The need to develop a set of protocols in the propagation of Sago to further promote the production of this underutilized plant is what the researchers are trying to achieve, since there have been no scientific methods developed for the vegetative production of sago in Panay Island, whose soil and climatic conditions favor Sago’s growth. The good thing about Sago is that it grows abundantly in marginal areas where only few plants survive.

A starch-rich palm, Sago’s trunk contains high levels of starch of high food value and wide industrial uses. In Aklan, the farmers usually scrape off the pulp from the trunk after splitting it. When sun-dried, the pulp can be used as flour for cooking into various delicacies. The leaves, on the other hand, are made into shingles for roofing.

On a commercial scale, Sago starch converts into ethanol, lactic acid, and biodegradable plastics with the use of biotechnology. Sago also contributes towards environmental protection through carbon sequestration, protection of swamps and drylands, and prevention of floods and forest fires.

The Philippines, however, does not have an established Sago industry, the results of a local study on supply chain analysis revealed. It added that the current production practices in Sago-producing areas in Mindanao and Visayas are merely confined to cater to the limited demand for sago flour from local processors for the production of delicacies, and the production of shingles is being carried out to augment
household incomes in the countryside.

The University of Philippines Mindanao is leading the research and development (R&D) efforts for Sago culture and propagation, national inventory and protection of wild stands, and better utilization in the country. In 2013, it established a pilot facility for R&D on Sago product development and utilization.

While majority of the Sago stands in the Philippines are located in Mindanao, which accounts for 507 hectares, Sago is also found on Panay Island (consisting of the Aklan, Iloilo, Antique, and Capiz provinces), Cebu, and Leyte, with a combined area of less than 40 hectares.

A survey conducted by Dr. Lelisa Teodosio of ASU indicates that although there is no available data on the actual land area devoted to Sago production in Panay Island (particularly in Aklan), sizeable patches of Sago stands are found in 12 out of 17 municipalities in the province. These include Ibajay, Makato, Tangalan, Numancia, New Washington, Lezo, Banga, Malinao, Batan, Balete, Madalag, and Libacao.

Teodosio leads a study funded by the Philippine Council for Agriculture, Aquatic and Natural Resources Research and Development (PCAARRD) titled, “Nursery Propagation of Sago Palm Suckers and Wildlings for Plantation Development” that aims to develop package of technologies for Sago production, specifically on the appropriate methods of nursery propagation and plantation establishment using suckers and wildlings.

The study has two components.The first component, led by Dr. Malco Teodosio, will study the survivability of Sago palm suckers as influenced by frequency and depth of looping (incision). The second component will deal with the survivability of sago palm wildlings at different leaf stages planted in various soil media and will be handled by Dr. Evelyn P. Vedasto. The study will be conducted in a 10-hectare area in Cabugao, Altavas, Aklan.

A similar study will be conducted in VSU.

According to Dr. Vedasto, the propagation of planting materials from Sago wildlings and suckers will be the focus of the study in its first year, on which they have just started. She said that on the first year of study, one of their objectives is to determine the optimum growing conditions for Sago from nursery to the field. Suckers, which arise from the base of the palm, are the traditionally used planting materials for Sago, while wildlings refer to the seedlings that grew from the seeds without human intervention. Both planting materials are conventionally used for the propagation of Sago.

On the second year onwards, the nursery-grown suckers and wildlings will be planted in the field, where their growth performance will be evaluated. The results, Vedasto says, will be very useful in finding out the most favorable growing environment and in the development of cultural management practices for Sago under Aklan’s conditions that will give the most benefits to local farmers.

ASU has included Sago in its indigenous crops program to further promote its conservation and utilization in Aklan and in the entire Western Visayas.

Improving an innovation pays off for young agri-entrepreneur