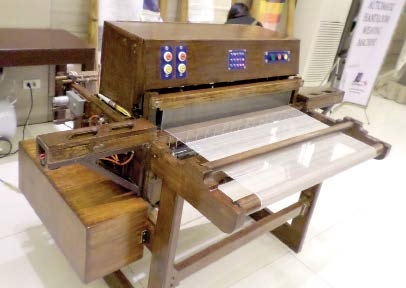 An automated handloom that can weave sensitive fiber materials seven to eight times faster than an ordinary manual loom was launched at a forum on livelihood opportunities in fibercraft at a Quezon City hotel last November 2, 2013.

The forum was convened by the Philippine Fiber Industry Development Authority (FIDA) of the Department of Agriculture. It was attended by members of cooperatives, farmers, and other stakeholders like entrepreneurs who manufacture various products from available fibers like abaca, pineapple, silk, and other indigenous materials.

The automated weaving machine, a first of its kind in the country, was developed by Engr. James Mendoza and Engr. Rey Florogo of JRD Systems Technology, Inc. Mendoza, the founder and president, is a management and industrial engineer, while Florogo is an electrical engineer. They have vast experience with semi-conductors, electronics, pneumatics, and electrical technology.

Dr. Remedios Abgona, officer in charge (OIC) of the Fiber Utilization and Technology Division of FIDA, said the new machine could go a long way in commercializing the specialty fibers in the country. Woven abaca, pineapple, silk, and other materials have a special market in the Philippines and abroad. Piña cloth, for instance, is the favored material for high-class barongs (native suits) for men and women. Abaca fiber is also woven into cloth and other fibercrafts, singly or in combination with other fibers.

The automated handloom does not only produce plain cloth, it is also capable of embroidering the woven cloth. The design can be programmed in the computer.

The available model can weave cloth with a width of 36 inches. However, Mendoza says they can also come up with a model that will produce cloth with widths of 48 or 65 inches, depending on the intended use for the woven cloth.

Mendoza and Florogo said they depended on their own finances to develop their prototype. They are very thankful, however, for the assistance given by the technical personnel of FIDA as well as the weavers in the provinces whom they interviewed for materials they could use in developing their model.

Dr. Abgona said that FIDA’s assistance was mainly in the provision of fibers which the inventors used in the experimental operations of their machine. Aside from that, the engineers also appreciated the technical inputs of the FIDA experts.

Engr. Mendoza said that the idea of producing the automated machine for local fibers came from a friend who was working in Cambodia. He said that the friend was engaged in making sedge mats which were exported to Taiwan and Japan.

That friend told Mendoza that they needed a faster means to produce the sedge mats because their foreign buyers needed about 7 container vans worth of sedge mats a month. With their manual means of weaving, however, they could only produce enough in a month for a single van load.

While figuring out how to go about developing the automated weaving machine, Mendoza and his partner went to the FIDA for help in sourcing fibers that they could use for their trials with their invention.

Dr. Abgona, whose work at FIDA involves the promotion of the utilization of fiber materials, immediately saw the potential of the machine that JRD Systems Technology developed. She convinced the engineers that they should first come up with a machine for the Philippines that would efficiently produce specialized cloth using the fibers of abaca, pineapple, silk, and other indigenous materials. In a year, they came up with it.

The prototype has a width of 65 inches, length of 48 inches, and height of 43 inches. It has a wooden housing for mechanical, electrical, electronic, and pneumatic components.

And how much does one machine cost? The company, according to Engr. Mendoza, is
thinking selling the machine in lots of threes or more so that the cost per unit could be brought down. They are thinking of setting a price of P400,000 for a lot of three units.

Target buyers are individual entrepreneurs as well as cooperatives whose members are producing abaca, pineapple fiber, silk, and other fiber materials like maguey.

The basics of vertical gardening