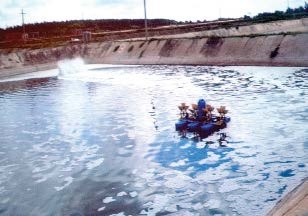 We participated in the recent 3rd International Fisheries Symposium held at Pattaya, Thailand. Among the interesting papers presented at the conference—which was attended by more 500 participants from Asia—were those on white shrimp, Nile tilapia, seaweeds, and white jellyfish. The highlights of these new developments in the fisheries of Southeast Asia are presented below:

Biofloc technology (BFT) is intended for recycling the nutrients—particularly the nitrogenous compounds that break down into toxic ammonia—in the intensive pond culture of the white shrimp (Litopenaeus vannamei). BFT is being promoted to minimize the water exchange rate in the culture of the shrimp and lessen the impact of wastewater discharges into the environment. To apply the technology, a carbon-to-nitrogen ratio of 16:1 is maintained in the pond water to stimulate heterotrophic bacterial growth to convert ammonia from feed wastes to microbial biomass (bioflocs) that can be consumed by shrimp and fish.

In a 70-day study, Tinnapop Kuawilai and co-authors of the Rajamangala University of Technology in Thailand found that the use of rice flour as an organic carbon source for the biofloc system resulted in the highest survival rates (90%), feed conversion ratio (1.38), and yield (637 g/m2) of the cultured shrimp compared to those for the other organic carbon sources (cassava flour, sugar, and molasses).

The red color of the white shrimp can be enhanced using mona rice or red yeast rice, according to Sirirat Kosolwach and coauthors of the Department of Aquaculture, Kasetsart University, Thailand. They also reported that adding mona rice to the diet of the shrimp also reduces cholesterol levels in the flesh of the shrimp.

The hot smoking of tilapia is one of the ways to preserve the fish and improve its quality. In a study conducted by Nurul Ulfah Karim and Mohd Faez Baharudin of the Institute of Tropical Aquaculture in Malaysia, it was found that smoking Nile tilapia with sawdust for two hours resulted in the lowest percentage of the lipid quality indicators free fatty acid (oleic acid) and thiobarbituric acid reactive substances (TBARS) compared to smoking with corn cob and coconut wastes.

Seaweed extract is an effective anti-pathogen for sea bass

The hot water extract of the brown seaweed, Sargassum sp., was found to be an effective immunostimulant against Streptocococcus inae, a bacterial pathogen of the Asian sea bass (Lates calcarifer). This was reported by Monsuang Yangthong and co-workers of the King Mongkut’s Institute of Technology in Thailand.

In their study, the researchers tested different concentrations of seaweed water extract as a supplement in the diet of fish cultured in tanks. The results showed that fish fed with 2 grams (g) of the extract per kilo of feed for 4 weeks had significantly higher levels of hematocrit, red and white blood cells, immunoglobulin, and lysozyme after 24 hours of exposure to the pathogen, indicating resistance of the fish to the pathogen. While there were no differences in the final body weight, weight gain, and feed conversion of the fish in all the treatments, the feed intakes of the fish treated with the extract at the rate of 1 and 2 g/kilogram (kg) of feed were significantly lower than that of the control fish with no extract in their diets.

Anicia Hurtadao and Alan Critchley of the Integrated Services for Development of Aquaculture and Fisheries (ISDA), Philippines reported on the effectiveness of the use of Acadian Marine Plant Extract Powder (AMPEP)—an extract of Ascophyllum nodosum, a brown seaweed from temperate waters—as a “seaweed vaccine” against the “ice-ice” disease and Neosiphonia infestation of the red seaweed Kappaphycus alvarezii.

The researchers said that the use of AMPEP increased the resistance of the red seaweed by activating its natural defenses for protection against pathogens that cause its bleaching or “ice-ice” condition and infestation by endophytic filamentous algae like Neosiphonia. Such abnormalities have led to serious declines in the production of the commercially farmed red seaweed worldwide.

Collagen, a protein compound found in the connective tissues of animals, can now be extracted from white jellyfish, according to Ratchanok Sahaworarak and Jirapa Hinsui of the Department of Fishery Products of Kasetsart University, Thailand. The researchers extracted the collagen from the jellyfish, which is found in abundance in the coastal waters of many Southeast Asian countries like Thailand and the Philippines, especially during the summer months. The jellyfish can reduce the amount of dissolved oxygen needed by other organisms in the sea when it is present in very high numbers.

In extracting collagen, the jellyfish is cut into small pieces and soaked in sodium hydroxide (with a concentration of 0.4 moles or mol) for 12 hours then subjected to acid soluble collagen and pepsin soluble collagen extraction with 1.0 M acetic acid for 24 hours. With its many uses in the cosmetic, biomedical, pharmaceutical, and food industries, the collagen from jellyfish is more acceptable to some religious groups (such as Islam and Judaism) that avoid collagen from other animals like swine and cattle.

Some facts about sunflowers