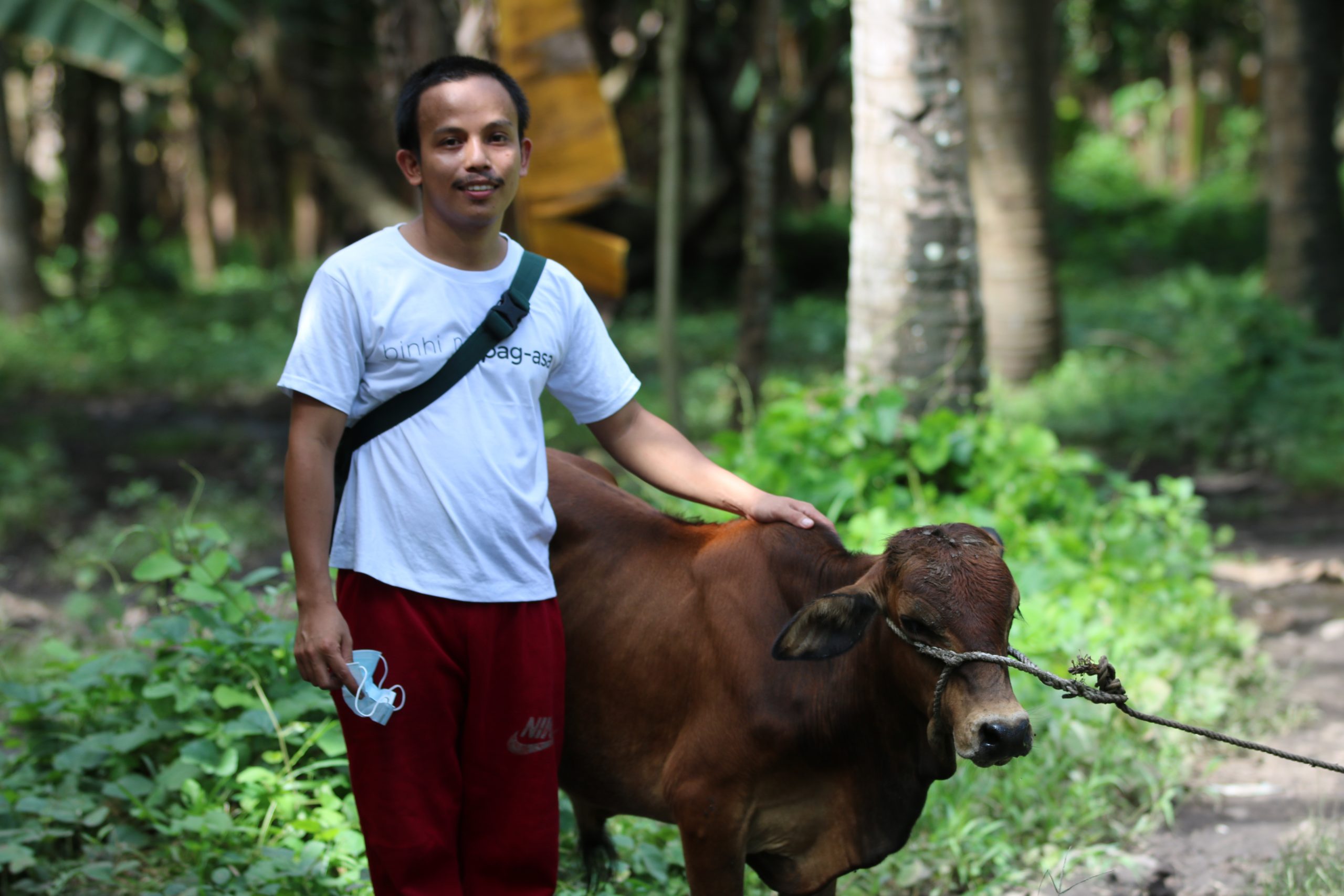 Matibag with one of the cows he received from a Department of Agriculture program.

Many are quick to dismiss young people as having no interest in agriculture. However, the growing number of young farmers show that this need not be the case, especially if they know that they can make good money tilling the land.

Radel Matibag, 25, from Brgy. San Isidro in Candelaria, Quezon is one such farmer. Matibag grew up in the fields. The son of tenant farmers, he has seen firsthand the monetary opportunity farming can bring. Now a tenant farmer himself, he currently grows rice, coconut, bananas, and vegetables like okra on a medium scale. The rice is grown on almost two hectares of land. The coconut and bananas are intercropped on three hectares, while the bananas occupy ¼ ha. 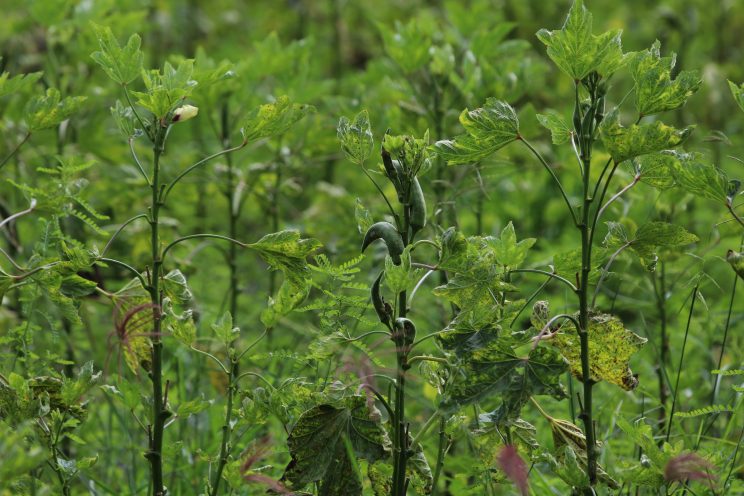 A close up of some of the okra plants Matibag grows as a tenant farmer.

A leader in the making

His interest in continually improving his craft caught the eye of local mentors. He joined the 4H Club, an international youth organization aimed at equipping young people with skills gained from real-life experiences and was elected municipal 4H president.

In 2017, he attended the4-H Leadership and Young Farmers’ Program: Binhi ng Pag-asa Summit, a leadership training seminar organized by the Agricultural Training Institute (ATI). “They taught us how to make fertilizers and how to align your product with your market,” he narrates in Tagalog. “They also taught us leadership skills.”

His enthusiasm for learning new things and his willingness to apply them on the farm led to his being encouraged to apply for what is called the Young Filipino Farmer Leaders Training Program in the Philippines and the ASEAN Young Farmer Leaders Training Program in Japan. Accepted applicants will be sent to Japan for 11 months to work in a farm that produced the commodity of their choice. Participating countries include the Philippines, Indonesia, and Thailand.

“I was training at Ato Belen’s Farm under the Farm Youth Program when I was encouraged by our Provincial Coordinator and our  Municipal Coordinator to apply. They said I was qualified, so it wouldn’t hurt to try because it would be an opportunity.”

This was back in 2019. Matibag returned in February 2020, just before the pandemic hit the world in full force.

“The commodity I chose was fruit trees,” he says. “I was sent to a farm that grew Mandarin oranges in the Ehime Prefecture on the island of Shikoku.”

Adjusting to a different country and culture was difficult at first, but Matibag was determined to do his best. “The first three months, I thought I wouldn’t be able to make it,” he shares. “It’s hard to be away from your family. You get culture shock because you don’t know what the norms there are.”

Pretty soon, his homesickness gave way to excitement. “I had adjusted by the time summer training started in August. I was working on the orange farm, their processing plant, and in their rice fields.”

Japan is known for its agriculture industry, despite having limited natural resources. Matibag enumerates what he observed could be a factor to their success, and unfortunately, it’s the opposite of what is known as ‘Filipino time,’ which is the tendency to be late for everything.

“The Japanese are very strict with time. It’s from them that I heard the motto that ‘time is money.’ Every single second is important to them. If they say 7 o’clock, you have to be there at 7 o’clock. You can’t be late.”

And even though the farm he was assigned to grow Mandarin oranges, Matibag says there are practices that he’s started applying to his current pomelo and calamansi crops such as fruit selection, marcotting, and pest management. “I remove the fruits that aren’t as appealing, for example, terms of shape or texture,” he says. “I’ve managed to grow pomelo seedlings through marcotting. I also learned about pest management—that I can control pests using chemical or natural means.”

Read about propagation through marcotting here.

As of the interview, Matibag was still in the process of developing his farm. “We only have a few trees right now and we aren’t earning much from the harvests yet, but I plan on adding more trees and expanding the farm,” he says. ”Calamansi and pomelo trees bear fruit after three years. If they’re grafted, they can bear fruit in three to five years.” 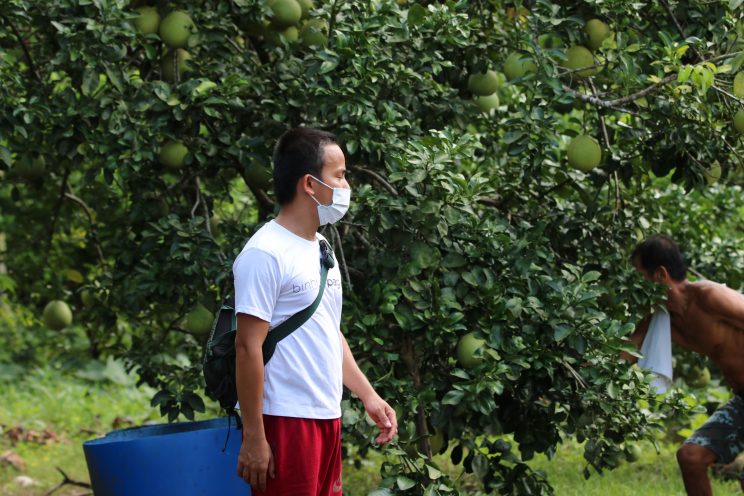 Matibag hopes to own a citrus farm one day. In the photo, he looks on as his uncle harvests some pomelo.

ASF isn’t the only roadblock he’s encountered. The uncertainty of depending on Mother Nature is something that he, and every farmer deals with. “One challenge that I’ve personally experienced are the storms that pass by [annually]. The coconut and banana plants take a year to recover. Pests are another challenge,” he says.

But the benefits he gets from farming far outweigh its challenges. “I enjoy [farming] because I keep my own hours. I don’t have a boss and I control the area that I manage,” he says.

He’s also grateful to be farming in an area that has sandy loam soil, which makes it easy to grow a variety of crops. “It’s ideal for planting as long as it doesn’t flood,” he says.

He also appreciates that the Department of Agriculture has programs in place for farmers who want to take advantage of them like he did. He mentions that he’s also attended training sessions on rice farming which have helped him refine his farming techniques and better his yield.

Matibag believes that it is possible for a farmer to make a good living, but they have to be prepared to work hard and work smart for it. “It’s possible [to make money from farming]. The current pandemic has shown us the importance of farmers. If it weren’t for them, it would be hard to find food. For example, it was hard for people to move around during the lockdown but for us farmers, work goes on in the fields. We’re able to produce food. That’s why plants are trending now, be they [edible] or ornamental plants. [People] have seen our importance,” he says.

Farming isn’t easy, but then again, no job really is. It has its own set of challenges that, if properly planned for, can be mitigated. For Radel Matibag, success will come from a combination of passion with the proper outlook, education, and support system. “For me, [people who want to find success in farming] should be passionate and have a positive outlook. They shouldn’t get discouraged by comments about not having support from the government. [In my experience], [government institutions] are willing to provide help, especially if a group is organized.”