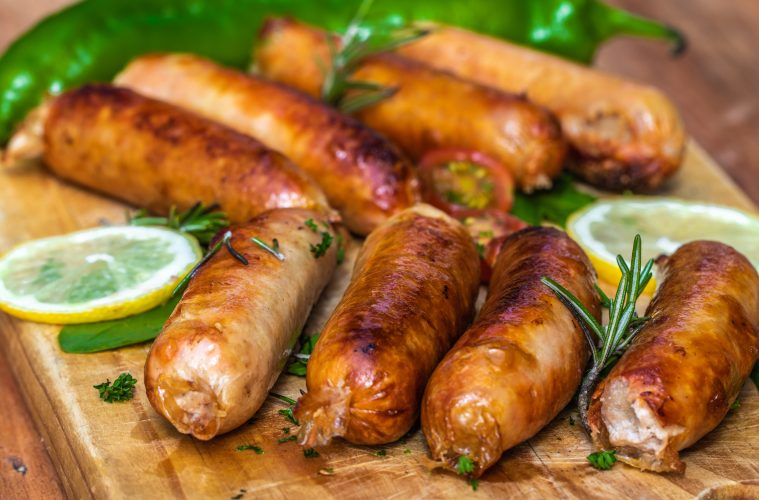 Photo by Edwin Jaulani from Pexels.

The processing of embutido, sausage, quick-cured ham, and tapang Taal were shown in the two-part special episode of AgriTalk 2020, a free webinar series presented by Agriculture Magazine and the Department of Agriculture – Agricultural Training Institute (Home of e-Extension in the Philippines).

This article will cover the first two recipes: Embutido and sausage.

Preparing the ingredients of embutido

Eguia shared an abbreviation that pertains to the process. They call it ECS (extender, curing mix, and seasoning), which indicates the sequence of preparing the ingredients of embutido. And CES (curing mix, extender, and seasoning) for the order of processing the embutido itself.

To make embutido, you’ll need a kilo of ground pork (800g lean; 200g back fat). For the extender, mix and dissolve one tablespoon of isolate and carrageenan powder into a half cup of water. The curing mix requires a tablespoon of refined salt, half a teaspoon of curing salt, phosphate, and one-fourth cup of chilled water. Combine the dry ingredients first then pour in the water afterwards and stir the mixture properly.

For Eguia, for every 100g of pork intake, our body can get about 50% of daily protein. Pork also contains vitamins A, D, E, K, vitamin B complex, as well as minerals such as zinc, iron, and phosphorus.

Once the ingredients are ready, the first step is curing the meat. Apply the curing mix to the meat and mix it using your hands until all the ingredients are absorbed and incorporated. Make sure that the meat is chilled when processing it to prolong its shelf life. Once the meat texture has turned tacky, pour the extender, blend it, and put the seasoning mix in.

Make sure you mix all the ingredients well. After that, add two fresh eggs, mix, then put two to four tablespoons of potato starch and mix it again.

The next step is packaging the embutido using aluminum foil. Rub the butter into the foil so it will be easy to remove after cooking. Banana leaves can also be used. Put a cup of meat into the foil, flatten it, add slices of boiled egg, and roll the foil to form the meat into a cylinder. Don’t forget to leave about an inch or two on both ends. When done, lock the edges of the foil by twisting them shut before steaming the embutido for an hour.

To begin, prepare one kilogram of ground pork (600g lean, 300g fat). In a bowl, combine one-fourth cup of water and half a teaspoon of carrageenan for your extender. Set aside.

Curing. Cure the sausage by adding your curing mixture to the meat and mixing it with your hands in a circular motion. Incorporate the extender, followed by the seasoning mix, and continue mixing the meat until the color is balanced. Afterwards, chill the sausage in the refrigerator for a day or two. Otherwise, cure the meat at room temperature for eight to 10 hours. This processed meat can last up to six months.

Casing. After curing, the final step is casing the sausage. Use a funnel to fill the casing with the processed sausage. Once finished, you can cook sausage in different ways such as frying, broiling, or grilling.

With these ideas on meat processing, you can now serve pork in different ways, whether for your household consumption or for a home-based business.

The procedure in making quick-cured ham and tapang Taal will be discussed in the next part of the article.