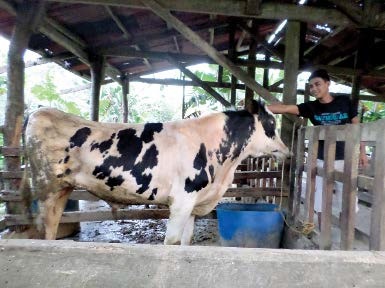 A few head of Holsteins are maintained to supply milk to the farm’s household and a local hospital.

Practical ideas from the Bolong Farm

Paraoir in Balaoan, La Union, is a coastal barangay where the soil is very rocky, with very shallow topsoil. But a pioneering veterinarian, now 98 years old, has transformed his property there into a highly productive farm.

This is the Bolong Farm, which boasts of poultry layers, beef and dairy cattle, pigs, fruit trees, and other crops. It was started in the late 1940s and continues to thrive to this day.

The veterinarian is Dr. Daniel S. Bolong, who is almost a centenarian but is still lucid and able to read without reading glasses.

In the beginning, he planted a lot of ipil-ipil trees, which thrived in the rocky area. He used the fresh leaves to feed his cattle and pigs. The pigs were fed a limited amount, however, because too much intake of ipil-ipil is not good for breeding pigs due to its mimosine content.

Ipil-ipil leaves, however, are particularly good for fattening cattle. The fat of the beef fattened thus is yellowish, which is what many consumers are looking for.

When ipil-ipil leaf meal is included in poultry rations, the eggs have bright orange yolks, which are also preferred by consumers.

Dr. Bolong started planting malunggay many years before Moringa oleifera became popular as a miracle tree with numerous medicinal and nutritional values. He planted thousands of malunggay trees, but not for commercial production of their leaves. He planted them for their fruits, which are a favorite ingredient in authentic Ilocano pinakbet. 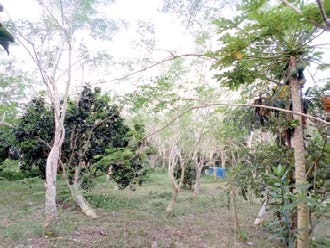 The malunggay trees are planted between the poultry houses as well as on his other farms located elsewhere. The planting of so many malunggay trees was designed to help the family members of his workers. The fruits thus harvested are marketed by family members, who sometimes go as far as Cagayan to deliver the fruits.

If you visit Bolong Farm today, you will see pummelos and other citrus trees intercropped with malunggay. While pummelos require full sun, it is all right to plant them between malunggay trees because these do not have thick foliage, and sunlight is not totally blocked.

Sometimes one will wonder if napier and other pasture crops will grow well in a place
with shallow topsoil. If you visit the farm today, you will witness the lush growth of napier also planted in spaces between malunggay trees and other plants. That’s because animal manure has been regularly spread on the ground. 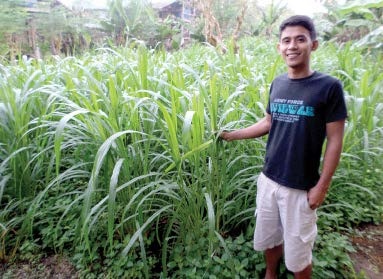 The fresh napier is fed to the cattle on a cut-and-carry basis. The excess production is made into silage for feeding during the dry summer months. As early as in the 1950s, the Bolong Farm has been making silage in trench silos. An excavation about a meter deep or more and several meters long is made. This is where the partially wilted grass is placed. The grass materials for ensiling are sprinkled with molasses to enhance fermentation. On top of the pile, a layer of soil is placed to prevent air from penetrating. In a couple of months, the silage is ready for feeding, and it can be kept for many months or even years.

The Bolong Farm maintains several thousand Leghorn layers. Some laying houses are just about a couple of feet above the ground. This is not good because there will be a buildup of ammonia under the layer houses. This results in a foul smell, and can be detrimental to the chickens and the farm workers. 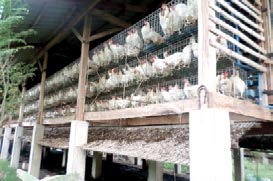 A layer house with floor that is at least eight feet above the ground is desirable. A panel of bamboo slats located midway between the floor and the ground catches the fresh manure before it drops to the ground, helping prevent ammonia buildup.

The farm has come now up with higher laying houses wherethe floor is at least eight feet above the ground. Midway down, below the floor of the laying houses, is a panel of bamboo slats that are about an inch apart and installed in a slanting position. This temporarily catches the fresh manure of the layers, allowing the manure to partially dry before it finally falls to the ground. This prevents the buildup of ammonia and the resulting undesirable foul odor.